Why You Should Be Reading… Dead Peasant’s Blood & Gourd!

Trick or treat, and welcome to the Halloween addition of WHY YOU SHOULD BE READING… As always I’m Grainbelt Jones back again…

At first I wasn’t planning on going along the gimmick route, and doing an expected Halloween review, but honestly this comic actually turned out to be a great read, and frankly this is the best time of year to put it out to the masses. Halloween happens to be one of my favorite times of year, not just because of the holiday itself, but more so its a great time to get into the paranormal,  and it also means Fall is in full swing, which is my favorite season of the year. Good treats, sweaters, hardy foods, and scary atmospheres makes this the best season before things become dark and cold during the winter months. If there was a place on earth that was fall all the time, I would strongly consider moving there, unless it was too creepy of course, that would not be a good idea at all. With all the haunted houses, pumpkin patches, and parties, I hope everyone finds time to read some cool comics, and I have one that will fit right in with the festivities. 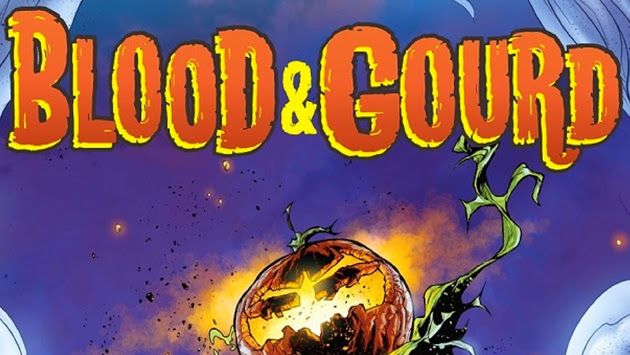 Blood & Gourd is an indy comic perfect for halloween, and published by Dead Peasant, it gives us a creepy Halloween story that starts on Oct 29th. Two days before Halloween we begin the story in a strange building that had just been purchased by a group of investors. It doesn’t take long for us to find out this is no ordinary building, before the investors can fully explore where their money had gone, they are attacked and killed by strange forces…. 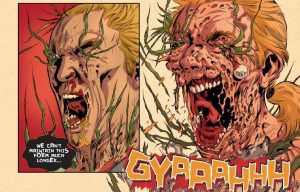 After our clue that stuff will be hitting the fan, we find ourselves along for a ride to the pumpkin patch. A family takes us to Henderson farm, where we learn this farm has been created, run, and built from the ground up by the Henderson family. Something is very odd about this farm from the beginning, the poor characters seem oblivious to fact things are about to go terribly wrong.  The Henderson farm has been in their community since the Henderson’s settled on this land, and this could be the reason the town folk don’t notice the danger just around the corner. They have become to accustom to being apart of the festivities this family offers every year. Amongst the pumpkin patch and other Halloween activities, we see some of our characters struggling with the fact this is the Henderson family’s last Halloween, due to the fact they’ve been bought out by strange wealthy men. The use of foreshadowing is quite telling, giving a clear glimpse this is the Henderson’s last time hosting Halloween activities, and not only due to selling their land, but due to the dangers lurking in the shadows.

Things kick off huge with a bang after an erie pumpkin competition, someone managed to grow a ginormous pumpkin that is not as it seems, and it seems to be alive and connected with the pumpkins surrounding it. Unleashing its rathe the pumpkin patch comes alive and begins to direct heinous acts towards the patrons present, it continues relentlessly as the good folks try and re take Henderson farm…. 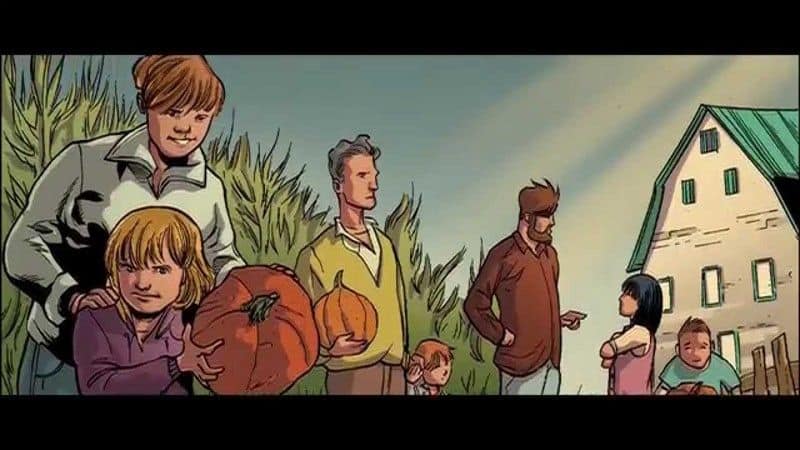 This is a good read and shaping up to be an engaging story, again… not something I felt I could do any other time of the year, but for Halloween this is perfect. I really like how the artwork pays homage to the 70’s style horror films, and I would even go as far as to say pumpkin head had a big influence on the comic. I also want to note Dead Peasant has a decent back story, and got this project off the ground by using crowd funding and determination. Definitely pick this up and show support, plus it will give you something creepy to read during the holiday.

Keeping it short and sweet this week guys, I hope you all have a Happy Halloween, and get some good treats. I’ll see you next week for another addition of….