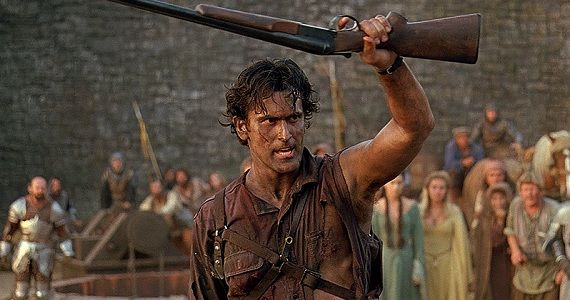 When the golden age of VHS blossomed in the mid-80s, you could rent a VCR for the night along with tapes. This was great for college kids since VCRs were rather expensive back in 1984. But if everyone chipped in, it was a movie night. The problem comes when four guys want to pick the movies for the night. You want to see something that mom and dad wouldn’t be renting that night. You’d have to sell your choice for a slot in the late night marathon. The instant selling point on Sam Raimi’s Evil Dead was the promise that someone gets sexually attacked by a tree. That sealed the must see deal for me on a Friday night. A few years later, Sam would return the pleasure to the big screen with Evil Dead 2 however it eventually became a rented VHS tape since it didn’t stick around the cinemaplex that long. Finally in 1993 Army of Darkness arrived in what proved to be a confusing release for fans eager for Sam to be a massive success in the indie ’90s. Rumor spread of Sam’s battle with the studio and the MPAA for a release. Army of Darkness: Collector’s Edition provides fans with a boxset that will take up a weekend with 4 different cuts. The plus is that you won’t have to rent a VCR.

Evil Dead 2 ended with Ash being sucked through a time tunnel and dumped in a medieval landscape surround by knights. The ending seemed like a big tease ending. As if they’d really release Evil Dead 3 as a period piece. We were still waiting for Mel Brooks to give us History of the World Part 2. Unlike so many teasing filmmakers, Sam delivered Evil Dead in olden times. While the locals should be freaked out by a man from the future with a chainsaw for a hand, they decide to take Ash (Bruce Campbell) prisoner. He only frees his bonds when they feed him to an evil demon in a pit. But Ash has experience getting rid of demons (or Deadites). Ash needs to get back to modern times so he can clock into his shift as S Mart. His only chance is to go into a haunted forest to track down the Necronomicon Ex-Mortis. This is the book that has caused so much trouble in the first place. Ash must get it back properly or he will raise an Army of the Dead that will attack the castle of the living. Natually he screws something up since he’s Ash. That’s where the sword and magical adventure goes into second gear.

The movie is amazing as it mixes the skeleton effects of Ray Harryhausen with the sensibilities of the Three Stooges. In one scene, Ash’s reflections in a broken mirror leads to a dozen little Ashs attacking him in a comical fashion. Later Ash splits in two. His evil side turns out to the be the antagonist for the third act. It’s an amazing film. Yet somehow Universal couldn’t help messing with it. They kept fighting Sam for the final cut. Even sadder was the MPAA wanting to slap it with an NC-17 for the violence that was mainly done to skeletons. The original theatrical version barely clocks over 80 minutes which barely qualifies it for a feature film. The international cut was sent out at 88 minutes. The good news is that in this boxset, you get both previous cuts along with a director’s cut that runs a whopping 96 minutes. Why did the suits at Universal not trust Sam? He already delivered two movies that proved major successes in the home video market. It’s not like Army of Darkness needed the same market research and treatment as a lame romantic comedy. The only good thing of this painful experience is that viewers can now enjoy all three cuts along with the version that ran on TV in syndication. This should be the final time you need to buy Army of Darkness….until 4K has a format.

The video for all films is 1.85:1 anamorphic. The TV version is 1.33:1 full frame. The screen resolution changes a little bit depending on the optical effects shots. A pure shot of Bruce Campbell is ravishing. The audio is 5.1 DTS-HD Master Audio and 2.0 DTS-HD Master Audio. You’ll hear all Ash’s best saying extra clear. The movies are subtitled.

Medieval Times: The Making Of “Army Of Darkness (96:35) covers all aspects of the production by interviewing Bruce Campbell and most of the cast and crew.

Original Ending (4:37) is featured at the end of the director’s cut so don’t watch it if you want to be surprised.

Alternate Opening (2:58) appears taken off the original video edit. A close up of Ash tells the tale of going to the cabin. This includes a commentary from Sam Raimi and Bruce Campbell about why they swapped it up.

Deleted Scenes (11:06) include how Ash got captured and a brighter version of the windmill introduction. There’s a commentary from Sam Raimi And Bruce Campbell about the snips.

Theatrical Trailer (2:05) sets up the action adventure and slapstick with the dead.

Audio Commentary with Director Sam Raimi, Actor Bruce Campbell, and Co-Writer Ivan Raimi is part of the Director’s cut. This allows them to show off the version they really wanted in the theaters.

On Set Video Footage Compilation (4:40) gives a sense of putting together the horse attack and skeletons.

Additional Behind-The-Scenes Footage From KNB Effects (53:54) is raw video from the shoot. This is movie magic at its finest. There’s a shot of Sam Raimi on the location in a t-shirt. Where’s his collared shirt and tie?

Vintage “Creating The Deadites” (21:59) is how the special effects team including The Walking Dead‘s Greg Nicotero made the undead seem so lifelike.

Extended Interview Clips With Sam Raimi, Bruce Campbell, and Robert Tapert (5:02) is from the original EPK. Sam is wearing his tie.

Television Version With Additional Footage (93:03) is a standard definition full frame of the film that was syndicated for TV. The video looks lame so you won’t watch this version much.

Theatrical Trailer (2:08) for the international release.

Still Galleries has over 200 stills.

Storyboards For Deleted Or Alternate Scenes (7:37) shows what Sam Raimi does to get a scene preproduced. Bridget Fonda was supposed to speak.

Vintage “The Men Behind The Army” (18:58) follows how to make the skeletons attack.

Army of Darkness: Collector’s Edition has everything you want except a visit from Bruce Campbell to chainsaw any deadites at your house. The bonus features leave no element unexplored.