In the last year we saw a lot of Damien Sandow, most notably as his Mizdow character. However, since his time under that gimmick and his feud with his former “employer” The Miz, Sandow hasn’t been seen that much.

After Sandow being absent for the most part since then I wanted to look back at the various ups and downs of Sandow’s career.

Back in the early 2000’s Sandow was part of OVW. His brief appearance on Smackdown! was mostly under the gimmick of Idol Stevens. During this time Idol Stevens and KC James were a tag team, working with Michelle McCool as their valet. At this time McCool’s gimmick was that of a “sexy teacher” so she nicknamed Stevens and James her “Teacher’s Pets”.

The two had a decent run but were soon pulled off television and back to developmental while McCool was sidelined with an injury.

Back in OVW Sandow did win OVW Heavyweight Championship and had a good run of matches for the title, including a few three way matches that were well received by fans and corporate.

Sandow briefly worked the independent circuit after being let go from OVW only to return to OVW soon after. This was another brief stint in the WWE development program before he went back to the indies and then wrestled with the World Wrestling Council (a Puerto Rican promotion).

In his first actual push on the main roster Sandow arrived as the pompous “Savior of the Masses” as he denounced popular culture and the lack of learning in the world. As a result Sandow often refused to wrestle opponents he claimed were inferior to him because the audience would not learn anything.  Yoshi Tatsu accused Sandow of being a coward which lead to Sandow retaliating and having a match with Tatsu. Thereafter, while he generally refused to wrestle opponents originally Sandow would then attack them, the matches would begin and Sandow went on a bit of a winning streak. 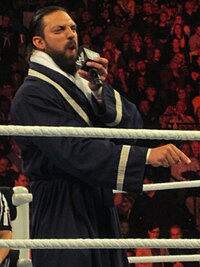 “Savior of the Masses”

This gimmick continued for some time and he would eventually align himself with Cody Rhodes, forming the team Rhodes Scholars. The team was successful for some time before splitting up as a result of Rhodes being sidelined with injuries. The would reform briefly only to split apart but remain “best friends” and wrestle in singles action. In July 2013, when Cody Rhodes was about to win the Money in the Bank ladder match Sandow threw Rhodes from the ladder and retrieved the briefcase, earning himself the title shot over his friend. This lead to a feud between Rhodes and Sandow. Sandow was on a losing streak when he attempted to cash in his contract, claiming that the then champion, John Cena, was still injured after a match Cena had been in with Alberto Del Rio. Sandow attempted to weaken Cena further by attacking Cena’s arm before cashing in but Cena was successful in retaining. See the failed cash in here.

This failed cash-in of the contract was only the second time in the history of the Money in the Bank contract that the person cashing in did not win the title. After this Sandow was on a bit of a slump, losing nearly all his matches. 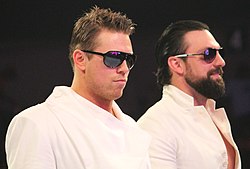 In 2014 Sandow began impersonating various pop culture symbols and superstars. In August 2014 Sandow formed an alliance with The Miz, (posing as Miz’s “stunt double” leading Sandow to adopt the name Mizdow. After a run as WWE Tag Team Champions and with mounting cruel treatment from The Miz, Sandow turned on his one time partner and former “employer” at Wrestlemania as he refused to let Miz overshadow him and use him in the Andre the Giant Memorial Battle Royal. Miz and Mizdown had a feud for some time before it was ended unceremoniously.

Sandow joined up with Curtis Axel, with Axel mimicking Hulk Hogan and Sandow mimicking Macho Man Randy Savage. The “Meta Powers” had a brief feud with the Ascension. However, when WWE fired Hulk Hogan the gimmick that Axel and Sandow were using was dropped immediately and neither competitor has been seen much since.

On WWE.com Sandow’s profile has returned to his original ring name and photo and the last lines of his profile seem to indicate he is going to return in the same gimmick he previously held as the intellectual “savior.” However, if we don’t see Sandow anytime soon there is a good chance he will be forgotten and treated as an after-thought, again.