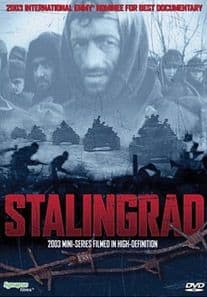 World War II was the war where film wasn’t merely a way of capturing the battle action, but a weapon to be used to change how people viewed their enemy. Film crews became a part of the battle as they capture images of brave soldiers looking victorious now matter how the outcome really was going. Propaganda was as important as tanks when it came to attacking the enemy and fortify the defenses back home. Triumph of the Will wasn’t merely a documentary, but a weapon in the Nazi arsenal. While Stalingrad is a documentary made 60 years after the war, it shows how both sides wanted to depict the costly battle. Both movies are being released on Blu-ray so viewers can get a greater sense of the drums of war and the eventual outcome.

Triumph of the Will (1935 – 111 minutes) set the standard for political advertising as it elevated Adolf Hitler into not merely the leader of Germany, but man who was ready to unleash his forces on the world. Director Leni Riefenstahl frames the Nazi part rally in Nuremberg so that no one can laugh off Hitler as quack. The first part of the film captures the arrival of Hitler from the sky. The camera gives a sense of how massive this event will be. The streets are packed with troops on parade. The city population crowds the sidewalks giving their unmitigated support. There’s a focus on the Hitler Youth camps surrounding the city. There’s plenty of close up of the athletic teens getting ready for the night. There’s an intimidation factor to the kids laughing at the camera. This is an army that will be replenished quickly. Even the men who are part of an agriculture unit are staunch as they march with their shovels. The movie isn’t merely intended for the German people as the first reel is relatively silent. This allowed the visuals to be absorbed by all of Europe. There are plenty of speeches as the film progresses. But Leni does not allow her film to be bogged down in single shots of lectures. She constantly cuts away to the crowd like an ABC sports production. She gives a sense of how the audience is receiving the message. The rabid enthusiasm is something to be feared by all. She does her best to make Hitler a cinematic star instead of another world leader caught in a newsreel. As the troops march out of the rally, there’s a sense that they might be coming to your country soon.

Stalingrad (2003 – 165 minutes) depicts what could be seen as the harsh reality to Triumph of the Will. The three part mini-series uses vintage footage shot by both the Nazis and the Soviets. Hitler was eager to capture the city of Stalingrad since it was named after Soviet leader. But the city wouldn’t fall easily. It was urban warfare at its harshest. Over 700,000 Germans and Soviets died during the siege by the time the Nazis retreated. The documentary interviews survivors from both sides of the conflict. The Germans didn’t quite have a good feeling about the battle plan. Things got tough when their tanks ran out of fuel before they arrived. But the troops knew that if they could capture Stalingrad and the Volga River, the war was over. The three installments document the bitter fighting and the atrocities that were committed in order to survive the harsh times. Besides the bullets and shells, all had to contend with the harsh winter. It’s hard to fight when you’re freezing to death. The documentary does point out when footage was recreated at the time for propaganda purposes. There is a desire to show the harsh truth instead of the varnished BS.

Triumph of the Will and Stalingrad should be watched together since they reflect the rise and fall of the Nazi war machine. This is what happens when you believe your own press releases. Triumph of the Will takes on a bigger meaning in an election year when every candidate is trying to frame themselves as a strong leader that will conquer ever problem facing his people. Stalingrad goes beyond the fearful framing to expose the human toll.

The video is 1.19:1 for Triumph of the Will and 1.78:1 anamorphic for Stalingrad. Triumph has done a restoration work that brings out the detail to the black and white ceremonies. Stalingrad is a mix of recent interviews and vintage footage. The audio for both is DTS-HD.

Audio Commentary is by Dr. Anthony R. Santoro on Triumph of the Will. He gives historical context to the movie and what’s happening on the screen.

Day of Freedom (17:02) is a short film Leni made to show more of the armed forces. Even in Nazi Germany, people whine about not getting as much media coverage. The focus is on the troops getting ready for the rally. They do a demonstration for the folks in the stands. There are hints at how they’re going to invade a few countries with their Blitzkrieg tactics on display.

Recollections: Deleted Interview Segments (17:18) are parts from the talks that were snipped. They’re arranged so it tells the story of the war from the various speakers.

Video Interview with Dr. Guido Knopp (11:14) lets the professor talk about the 60th anniversary of Stalingrad.

Stalingrad Today: Views of the City of Volgograd (3:03) show the city 60 years after the shelling stopped. It’s a much nicer place now although it doesn’t forget it’s history as Stalingrad.

Tags: Stalingrad, Triumph of the Will, World War II