The horror genre is littered with hundreds and hundreds of movies that are released, then quickly slip into obscurity. Most of them stick to the well-worn paths originally blazed by films like The Exorcist, Halloween, A Nightmare on Elm Street, or any number of other horror classics. But a good, hefty percentage of these films don’t even come close to the quality of those films and generally range from mediocre to downright garbage. Once or twice a year, however, a horror film will break from convention and knock the socks of moviegoers, garnering responses from much larger crowds than the niche audiences that horror usually attracts. Last year, it was The Witch. The year before, it was The Babadook and It Follows. Before that, The Conjuring. All these movies made a name for themselves by subverting the genre, surprising (and scaring) the crap out of us. It’s generally why sticking to basics when making a horror film is often not enough. 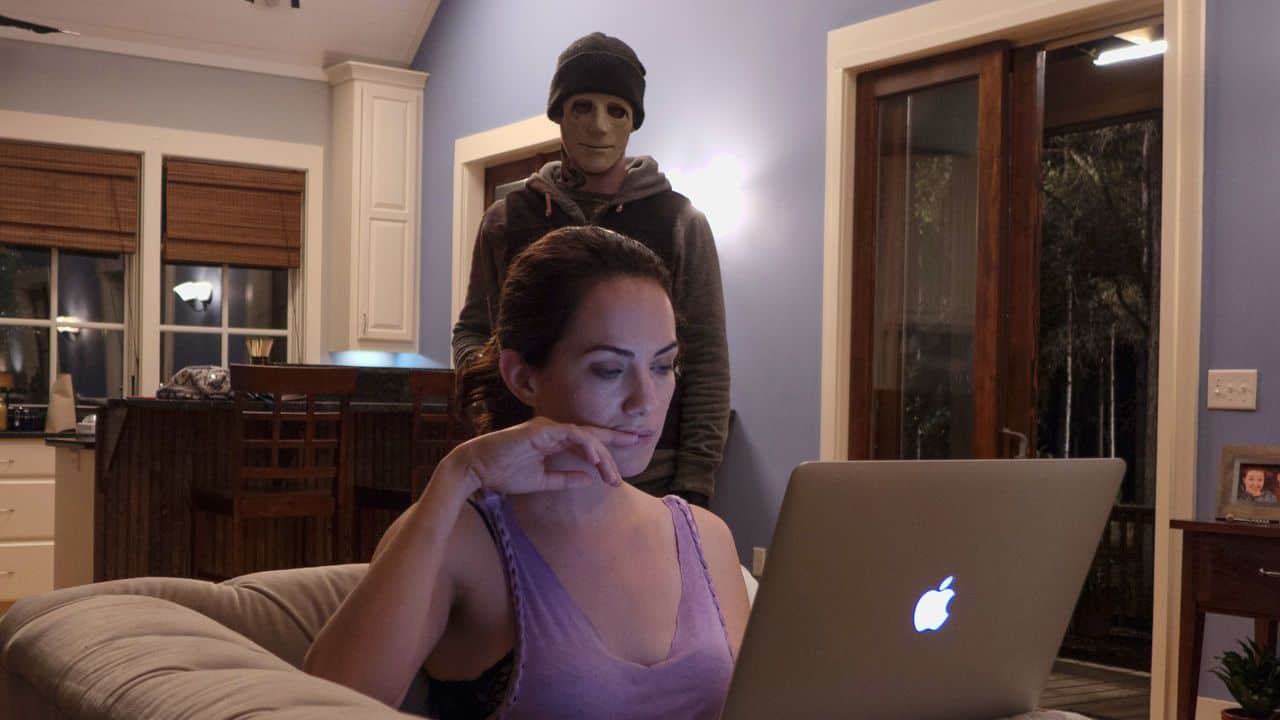 But sometimes a horror movie comes along that’s really good for the simple reason that the filmmaker knows what the heck he’s doing. This can be said for Mike Flanagan and his newest outing Hush, the story of a young deaf woman who is trapped in her home as a psychotic murderer tries to get inside and kill her. Pretty straightforward, right? The only obvious wrinkle is that the woman, Maddie, (played with aplomb by Kate Siegel) is deaf, seemingly giving her would-be attacker a massive upper hand. And while this is true at first, the genius of Hush (and the subtle subversion) is that it slowly turns Maddie’s disadvantage into a weapon against her assailant.

Hush owes a lot to previous home invasion films, most notably The Strangers and Funny Games. Anybody who watches horror movies, even on a semi-regular basis, know that the home invasion sub-genre is really hard to do right. Part of it is the basic restraints in logic that the very premise presents. You’re in a house, there are a finite number of ways to escape or fight back. It’s why so many of these films end the same way and fail to illicit any scares (*ahem*). The last time we saw a truly successful home invasion film was with 2011’s You’re Next, a gleefully maniacal little picture that had just as much humor as it did blood. Hush doesn’t have that film’s humor or panache, but it does have its central subversion, Maddie’s deafness. That along with tight direction, a sharp script, excellent acting, and a dash of cleverness make this movie well worth it’s 90 minutes.

At first glance, it might seem like a cynical gimmick to make your main character deaf. But that is almost immediately undermined by Flanagan’s adept direction and the way he introduces us to Maddie as she’s cooking dinner in her remote home. As she’s cooking dinner, we waver in and out of Maddie’s auditory perspective. One second vegetables are sizzling in the frying pan, then we slowly fade into silence, only to be pulled back to our voyeuristic viewpoint. What’s brilliant about this device is not that it’s stupendously clever (perspective shifts to the protagonists are a common trope in horror films), but rather that he does it throughout the movie. This should be utterly maddening for the the viewer. Having our sound taken from us periodically should be completely untenable and frustrating. But the genius of Flanagan’s direction is that he takes the sound from us the moments that Maddie needs her hearing the most. This has the wonderful effect of allowing us to be voyeurs for large swaths of the film, only to be forced to experience Maddie’s helplessness in her most panicked moments. And the truth is that it’s done so subtly, you might not even realize it’s happening until the scene is over. This is the true subversion of Hush: not the deafness itself, but forcing the audience to experience Maddie’s deafness, and to slowly realize that her deafness isn’t a handicap. It’s an advantage.

It’s not immediately clear that this is the case, but it is actually Maddie’s deafness that saves her. Our first helping of horror comes when Maddie’s neighbor comes banging on her door, covered in blood, desperately trying to get her attention. But the killer catches up with her and stabs her to death, just a few feet from the oblivious Maddie. After her neighbor is dead, the killer experiments with trying to get her attention. When he realizes that she’s deaf, he begins to take every option for escape away from her. First, he takes her phone. Then, he cuts her wifi. And because this is 2016, there is no landline for her to call the police. The killer uses Maddie’s deafness to his advantage, sneaking up on her throughout and making escape impossible. But as Maddie learns that he underestimates her, she begins to understand she can use her other senses to undermine his lines of attack, culminating in a scene in the bathroom where her sense of touch comes in handy.

However, this would all be moot if it weren’t for the acting of the two leads. Kate Siegel and John Gallagher Jr. commit fully to their respective roles of victim and tormentor, creating a cat and mouse dynamic that sizzles with negative chemistry. For the bulk of the film, it’s just the two of them, sizing each other up and sneaking around corners. Barely a word is spoken between them. Maddie’s only lines occur inside her own head as she struggles to outsmart Gallagher’s menacing intruder. And he speaks to her exclusively in threats. The true communication lies in the looks they give each other, their body language, and the intention of their movements. A fully formed relationship rises from the subtlety of their interactions; a simple glance here, a deadly smirk there. And that subtlety extends to the more gimmicky aspects of each character. Maddie is deaf, but it doesn’t define her character. The assailant is horrifyingly psychotic, but Gallagher displays this with no more than a smile and a knife. The movie rests on the shoulders of these two talented young actors, and they deliver with believable and nuanced performances.

Mike Flanagan is best known for his previous film, Oculus, about a brother and sister trying to destroy a haunted mirror (I know). It was lauded as a success when it came out, though I didn’t find it particularly interesting. However, his feature film debut, Absentia, was an excellent piece of weirdness and announced the arrival of a promising young voice in horror. Hush is further evidence that Flanagan could bring new energy to the genre that over the past few years has been overrun by found footage nonsense and remakes of movies nobody watched to begin with. He has two more films coming out this year: Before I wake and Ouija 2. Neither seem like very promising projects, but if anybody can turn them into something special, it’s Mike Flanagan.