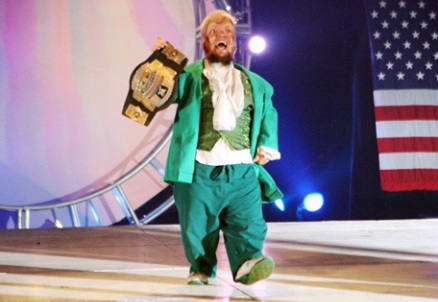 Hornswoggle on preferring the term midget since it’s commonly known in the industry: “I like the term ‘midgets’. It makes me money. You can’t put ‘little person wrestling’ on a poster. Otherwise, it’s like, ‘what is that?’ [If] you put ‘midget wrestling’ on a poster, people know what it is, so I always called myself a midget and I don’t ever care if other people do the same thing either.”

On his WeeLC match with El Torito: “That match alone, I will fully say that that WeeLC match made my career. It’s the best thing I’ve ever done with the company, bar-none. We got to work too. We did our comedy stuff, but we actually got to work.”

On two storylines he didn’t want to do in WWE but still did: “I never said, ‘no, I’m not going to do that’. Two things stand out that I really didn’t care for, there was the one where they dressed me as a cow. Obviously, I didn’t care for it, but I knew it was for ‘hahas’ for fun stuff. And then, when they put me in a diaper as the New Year’s baby, I was like, ‘ugh, here we go’.”