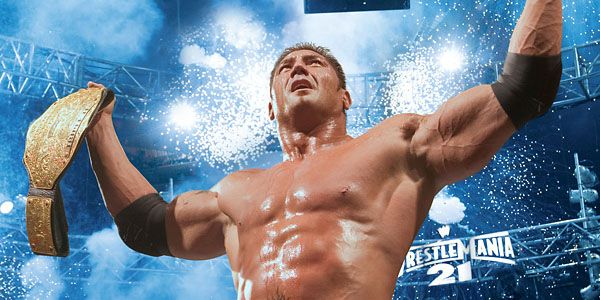 On Wishing He Was In Better Shape During His 2014 Run: “I wish I could’ve been in better shape,” Batista said. “I should’ve been in wrestling shape and I really wasn’t for a few different reasons. One, I was injured coming back. I had a really bad Achilles’ tendon injury, but also, I had really stayed away from the weights and the really strenuous working out for years because I was trying to conform and I wanted to be an actor. I wanted to look like an actor and I wanted to blend in and fit in, so I was really against it. I wanted to get away from that muscle bound look. The fans always kind of respected me for that look. That was something I carried with me and set me apart and I didn’t give them that. And I really wish I had. Now when I look back at pictures I really am embarrassed about the shape that I was in. I should have been in better shape for that.”

On Being a Daniel Bryan Supporter: “I did the thing with Daniel Bryan. Let me tell you the reason I was pissed about the whole thing, the reason why, because I didn’t want to work with him at the next pay-per-view. I wanted to work with [The] Shield. I wanted to do the Evolution thing, so it wasn’t anything against Daniel Bryan and it wasn’t because I loved Evolution so much. I wanted to do the Evolution thing and that’s what kills me. So the first thing, the whole Daniel Bryan thing, I love Daniel. Everybody gave me a lot of grief over that and I was one of the first guys way back when saying ‘Daniel’s great! You’ve got to do something with him!’ They wanted me to job him out. The only time we ever worked together and I was like, ‘he’s way too good for that!’ And people, they gave me all this s–t about being so anti-Daniel Bryan and I just didn’t know where it came from.”

On Working With The Shield: “And then, the whole thing with The Shield, like, I love that whole run, man. I loved working with those guys. The thing is, we put them over like a million bucks then they split them right up.” Batista added, “they could have continued that run for at least year together. Those guys are great. The Shield was such a strong unit. Man, they could have milked that for everything that it’s worth. They should have had them running with the Wyatts till everybody was sick of seeing it, but they split them right up. And not only that, but we did this match where we literally, we all beat the s–t out of each other. And, of course, I don’t mind being the fall guy, take the fall, whatever, they can go over me. I’ll put them over like a million bucks, but the thing that pissed me off was that we busted our ass to get those f–king guys over and everybody walked away saying, ‘Batista wore blue. What an asshole.’ f–king really? That’s what you got out of that f–king match, that I wore blue? That s–t pissed me off, man. It just pissed me off.”