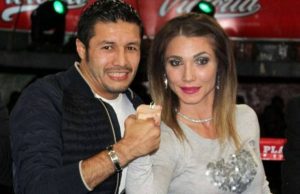 She announced the beginning of the next chapter of her life when she appeared unmasked at a boxing event last night. Her husband and professional boxing star, Jhonny González, introduced her to the ring at the event. Her unmasked appearance symbolized her transition between the two professions.

It also sounds unlikely that she will appear in the seasons beyond Lucha Underground Season 3.

We wish her all the best in her journey as a professional boxer!