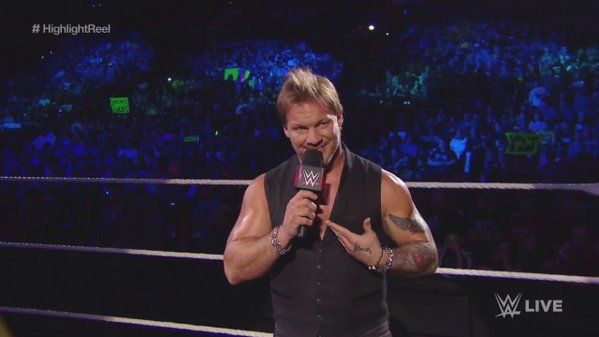 Chris Jericho spoke with The International Business Times for a new interview. Some highlights are below:

On his plans for The Jericho Network: “Over the course of the last few years with the success of “Talk is Jericho,” being one of the biggest podcasts in the world and airing that twice a week, I started thinking “how can I expand what ‘Talk is Jericho’ is all about?” I’m very interested in the podcasting medium. I think there’s a huge, huge future for that. And just knowing how many podcasts I listen to throughout the course of the week, it really has become something that’s replaced listening to music a lot of times. I think the world’s finding that. This bite-sized, hour-long conversation that you can listen to on the way to work, on the way to the gym, at the gym, when you’re mowing your lawn, whatever it may be, very much appealed to me. And obviously looking at the No.1 podcaster in the world being Adam Carolla, how he’s kind of done his business and how he’s grown his podcast empire. One of the things that he does is his own network, something that I started to think about. It’s going to be a roster of very interesting people that I know are going to be entertaining, that are very good at the medium. Some have done podcasting in the past, some have not. But it’s all about the hosts for me. I don’t care what they talk about. I don’t care what the format of the show is. I just know the people I’m bringing on are very interesting, entertaining people. And it’s not just going to be wrestling, or just music, or paranormal, or pop culture. It’s going to be a mix of all those things. So what I’m trying to do, much like “Talk is Jericho,” whether you know who my guest is or not, if you enjoy the show, trust me. You’re going to like every one of my episodes because I don’t have people on that aren’t interesting, no matter whether you’ve heard of them before or not. And it’s the same thing with who I’m choosing to bring aboard as hosts for the people that have their own shows on the Jericho Network.”

On where his current WWE run ranks for him: “From the moment I came back this was always the plan. So everything that I did, me turning on AJ [Styles], that was kind of already written. It was fun for me to go out there as a babyface, knowing that the character is kind of stale, knowing that when I’m leading a rooty-tooty-booty chant it’s not very cool. I don’t know what rooty-tooty-booty means, but I also planted seeds to eventually turn heel. So it is one of my favorite years. It’s definitely my best year since 2008, 2009, no doubt about that. And you never know what’s gonna stick. If I was a band to have two late career top-10 hits, so to speak,cwith “stupid idiot” and “drink it in, man,” who would have ever expected that? Who would ever expect that I would make “stupid idiot” a catchphrase? But that happens, so it really has been a lot of fun from a character standpoint, from a work standpoint, and getting a chance to kind of lock horns with this whole new generation of guys who all have the same mindset that I do. Just wanting to have a great match and just wanting to make their mark in the business. So it’s up there for me for sure. I don’t think anybody expected it, including me, but now that it’s the case, I’m riding it.”

On if he’s surprised that WWE has talked on TV about Roman Reigns’ suspension: “I think they have to because he’s the top guy in the company and his push over the last few years has been astronomical, and he gets a huge reaction, Whether you like him or not, he’s definitely a polarizing figure, and people make noise for him. So I think by acknowledging it, you own it. You’ve got a big zit on the end of your nose and you say “look at my zit on the end of my nose” and people kind of get disarmed. They can’t use that as ammunition anymore. It’s the elephant in the room. They’ve said it enough times, so I don’t think it really matters. It’s not like the guy shot somebody or robbed a bank or something like that. There was a suspension and in less than two weeks he’s gonna be back and they’ll be one night of people heckling him probably for a bit and then it’s gonna be gone, move onto the next thing. So I think it was a smart move for them to take ownership of it because if you don’t then you’re almost manifesting it to a bigger thing. It’s like you’re trying to hide it, and they’re not trying to hide it. It shows that the wellness policy is 1,000 percent legit. Because if there was anybody they’d try to protect it would be him.”