Robert De Niro really got a chance to show he could handle a comic role when Midnight Run had him go cross country. The intense actor who gave us The Godfather, The Deerhunter and Raging Bull could crack a smile without it meaning he wasn’t going to beat you to death with a baseball bat. Midnight Run: The Collectors Edition brings the film to Blu-ray with a new interview with De Niro. Here’s the press release from Shout! Factory: 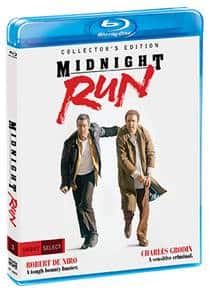 As one of the first releases in their anticipated new line of films called Shout Select, Shout! Factory will release Midnight Run on Blu-ray on August 23, 2016. The release includes a full slate of bonus features – several interviews including a NEW interview with Robert De Niro, and a vintage making-of featurette.

Jack Walsh (Robert De Niro) is a tough ex-cop turned bounty hunter. Jonathan “The Duke” Mardukas (Charles Grodin) is a sensitive accountant who embezzled $15 million from the mob, gave it to charity and then jumped bail. Jack’s in for a cool $100,000 if he can deliver The Duke from New York to L.A. on time… and alive. Sounds like just another Midnight Run (a piece of cake in bounty hunter slang), but it turns into a cross-country chase. The FBI wants The Duke to testify. The Mob wants him for revenge and Walsh wants him to just shut up. If someone else doesn’t do the job, the two unlikely partners may end up killing each other in this hilarious, action-filled ride from producer-director Martin Brest (Beverly Hills Cop).

Shout Select endeavors to shine a light on films that deserve a spot on your shelf. Debuting this August, Shout Select boasts an exciting slate of fan-favorite releases making their Blu-ray debuts. Titles include the pulp sci-fi rom-com classic The Adventures of Buckaroo Banzai Across The 8th Dimension, the time traveling Bill & Ted’s Most Excellent Collection, John Carpenter’s Emmy Award® -nominated biopic Elvis, and the rowdy action-thriller Road House. Each title will be presented in anamorphic widescreen, and when possible will be released as a Collector’s Edition, with new bonus content, archival materials, collectible cover artwork, and more.