The show opens with a video hyping up tonight’s big matches – The Authors of Pain vs. American Alpha, Samoa Joe vs. Rhyno, and Bayley vs. Nia Jax. Rhyno comes out to face Joe in the opener – kinda surprising to see the NXT Champ in the opener, but it’s different. Rhyno charges into Joe and doesn’t budge him – so Joe wants him to it more. Joe goes for a lariat, Rhyno ducks, and finally shoulderblocks him down. Rhyno punches and chops away in the corner. Joe fires back with forearms to the jaw and hard chops to the chest. Joe hits the corner elbow and high kick.

Tom talks about Joe’s journey in NXT from the Dusty Rhodes Classic to now, which really does make him seem like he’s been around for a long time. Joe punches away and hits a big back elbow. Rhyno gets whipped into the buckle hard and Joe locks on a nerve hold. Joe hits a reverse atomic drop and a running kick, but the senton misses. Back and forth punches lead to a Gore attempt, but Joe punts him and hits an ST-Joe and the Coquina Clutch ends it. 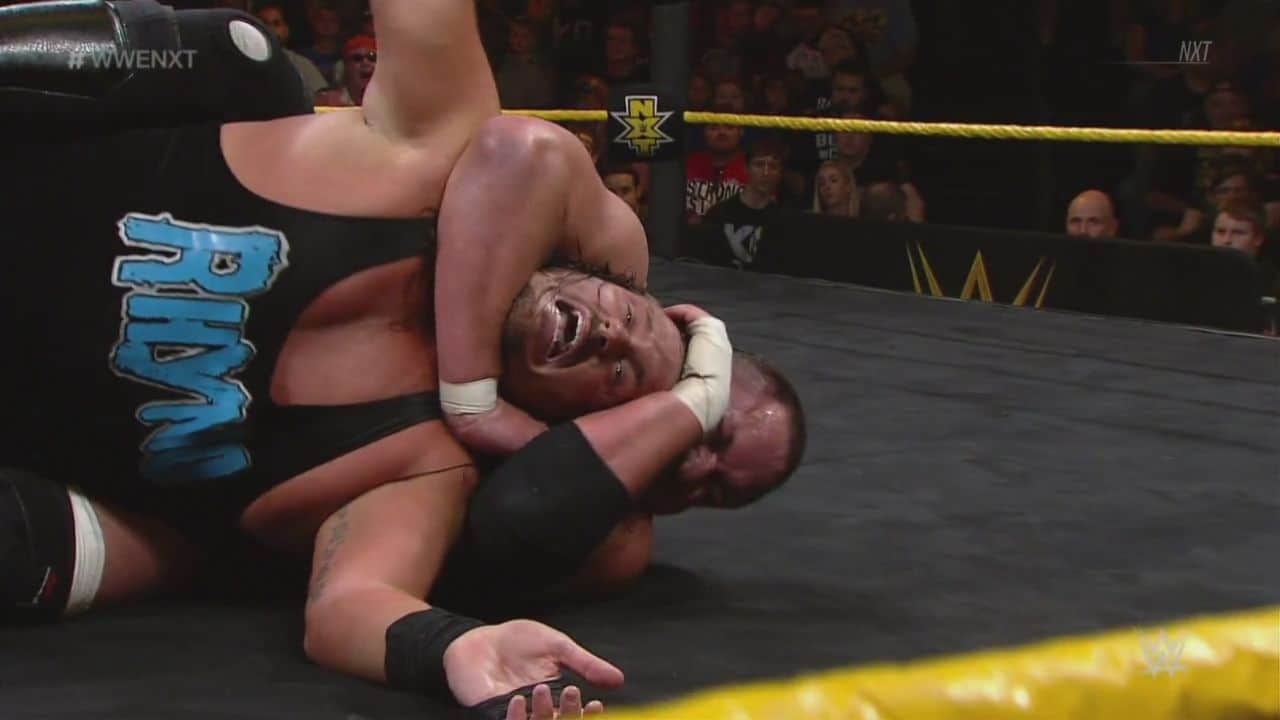 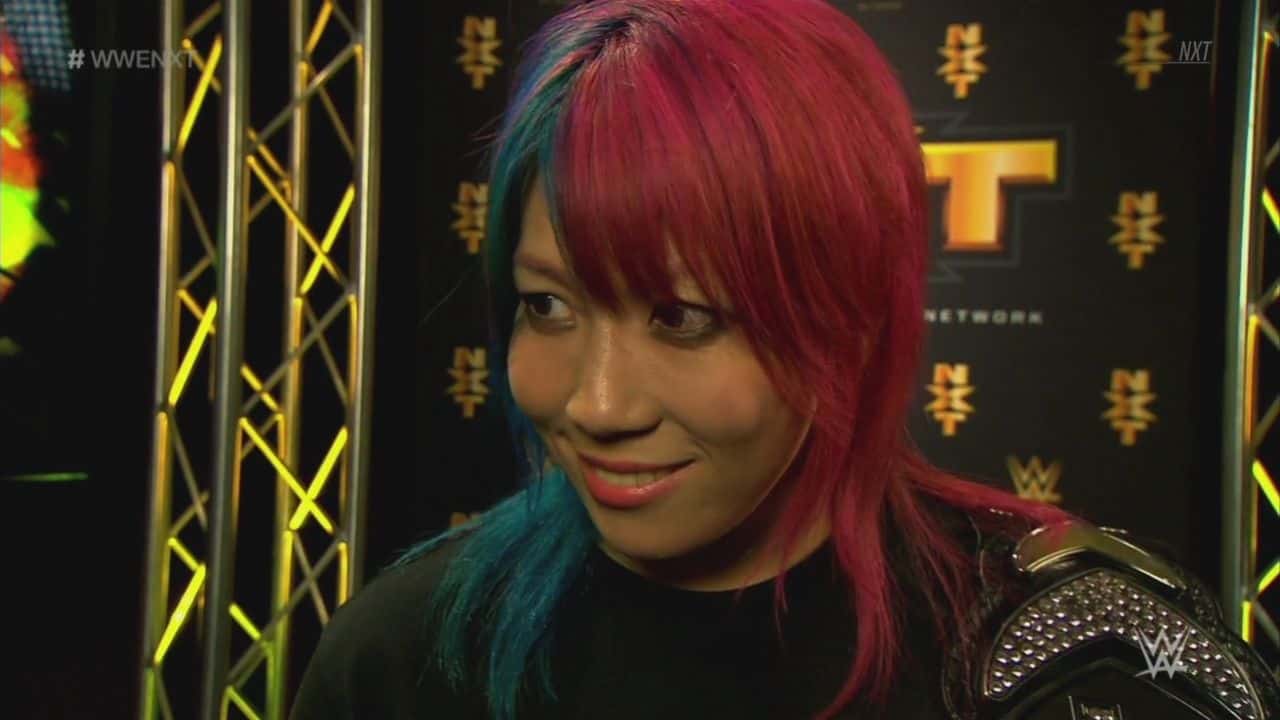 Asuka is asked who she would rather face – Bayley or Nia, and she says she’ll fight both of them. American Alpha vs. The Authors of Pain is next, with Corey congratulating AA for being on the main roster now. The NXT callups from the draft are covered. AA comes down, but the Authors jump them on the ramp. The AOP are now in Bossman ’99-ish riot gear. Corey asks Tom if he knows anything about them before saying that Ellering isn’t making any available.

After a brief break, AA decides to go to war against the AOP. Jordan muscles the tattooed member in the corner and tackles away. Double Northern lights suplex gets 2. AOP 1 tosses Gable into AOP 2 for a bearhug/bodyblock combo.AOP dominates with generic big man offense, but Jordan tags in and hits a massive exploder before hitting the other one with a Saito suplex while partially holding him off the mat. Jordan gets stun gunned, but tags in Gable. 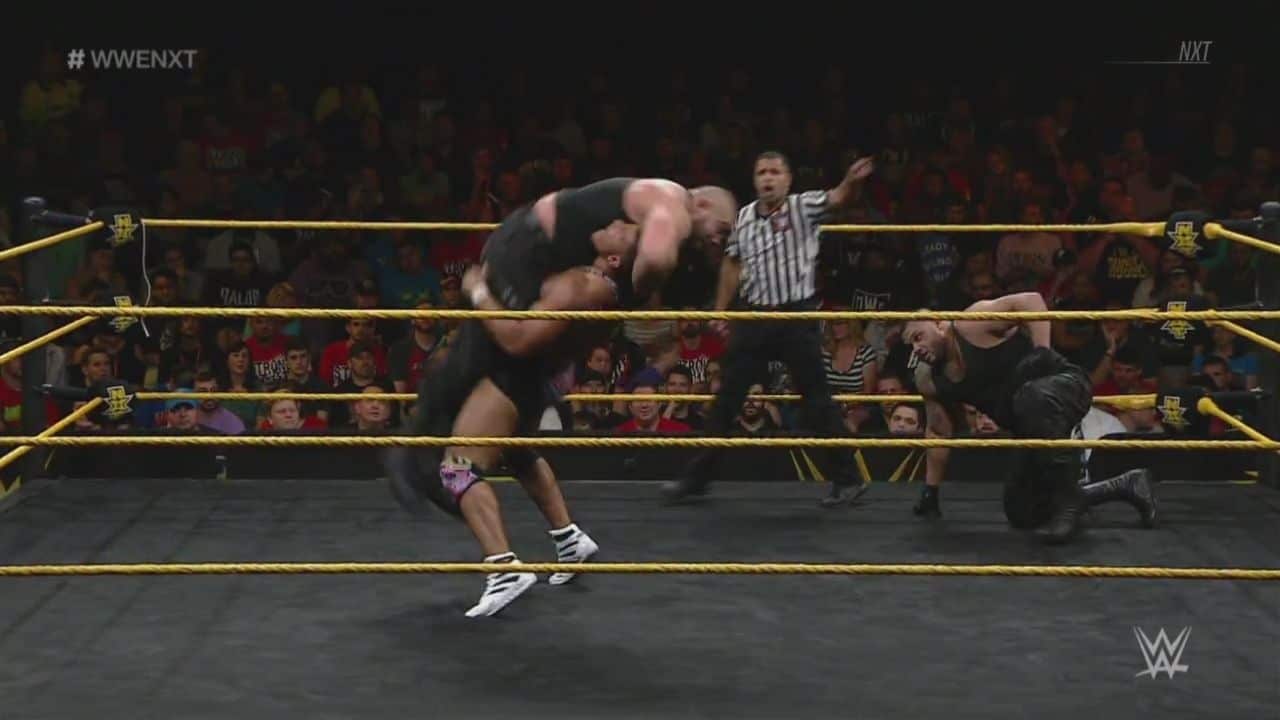 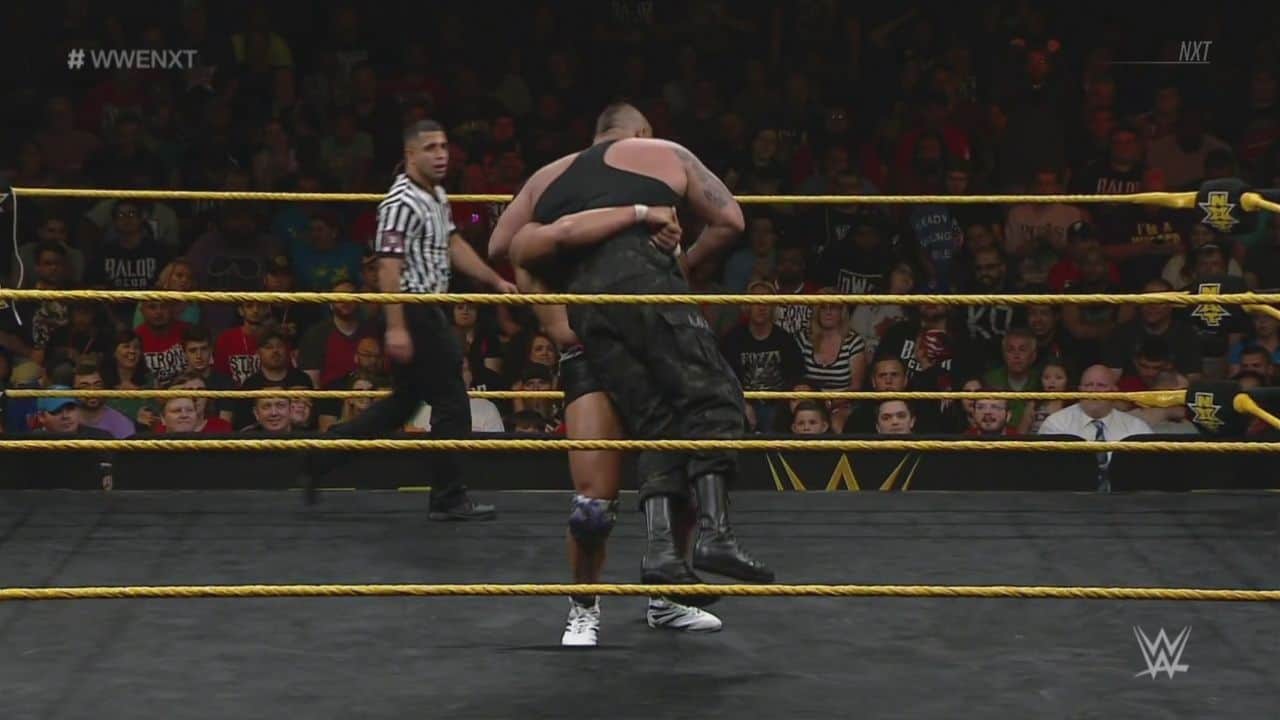 Gable darts in and takes him down with forearms before hitting a high-lift exploder for 2. AOP 1 goes for the sideslam, but Gable gets an ankle lock. AOP 2 pulls him to the ropes, so JJ dives over the top onto him! Gable goes for a baseball slide, but gets swung into the LED board and JJ hits the steps. AOP takes a thousand years to hit the high/low Russian legsweep and get the win. 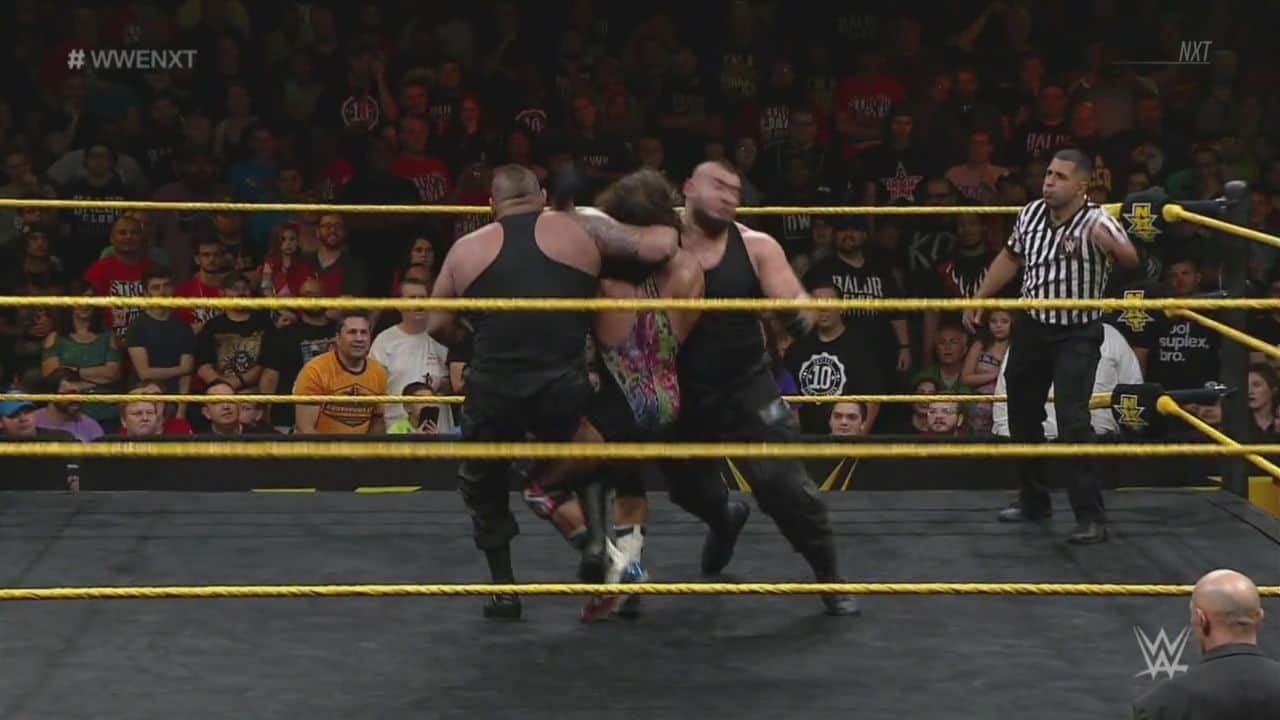 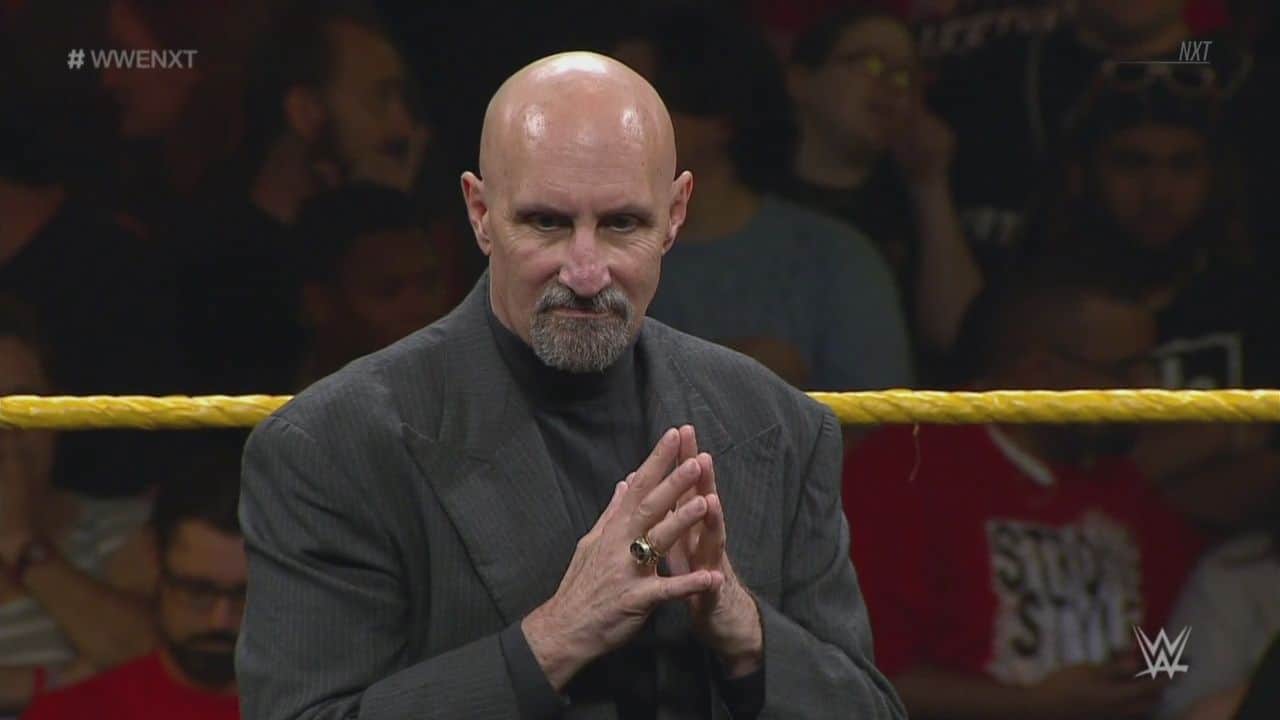 The Revival are interviewed and say AOP should thank them for breaking AA’s spirits. They brag some more and clank the belts. Ciampa and Gargano say that they can beat them, already did, and just need a shot at the gold to earn them. Hideo Itami hype video showcasing his return in two weeks. Patrick Clark is atop the buckles dressed in the red, white, and blue looking like a late ’80s AWA jobber. He’s from Tough Enough’s reboot and he’s facing Austin Aries. 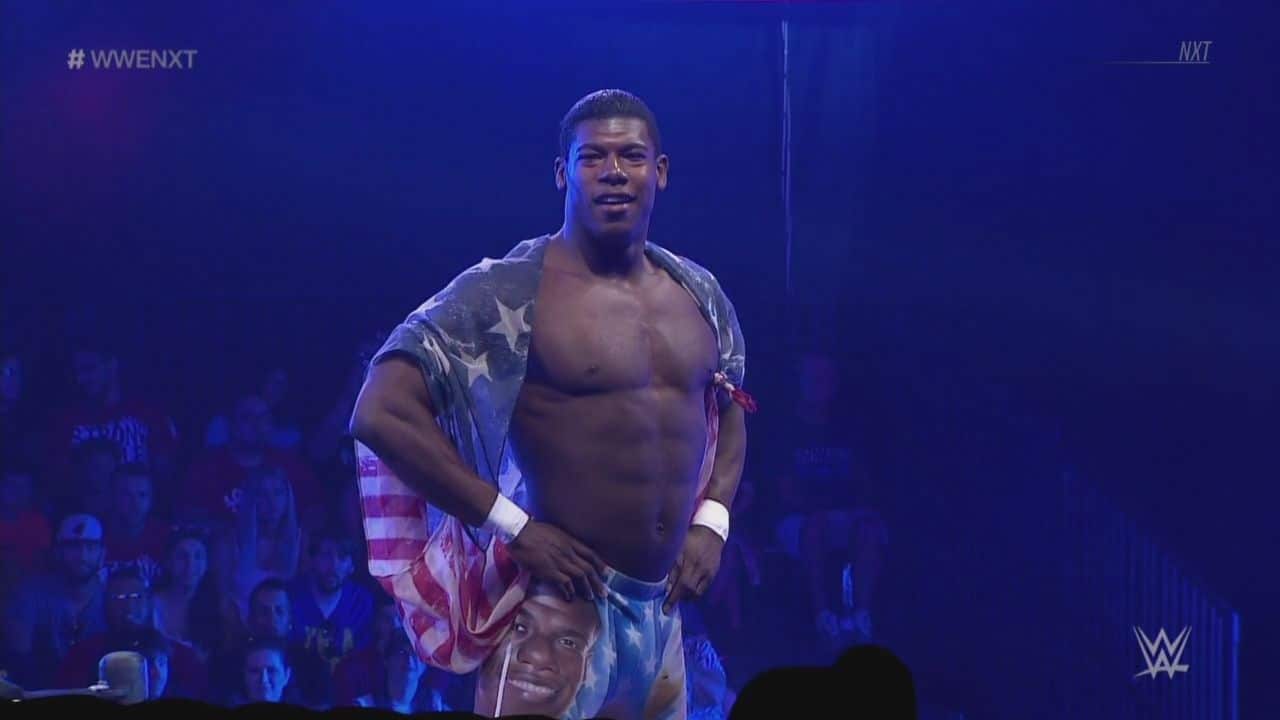 Austin Aries is perfect for Patrick Clark to face – he’s a veteran and someone who can teach him a lot in just one match. They wrestle on the mat a bit before Aries dominates in the corner, hits a corner dropkick and hits a discus elbow as Clark jumps in and the Last Chancery ends it. No Way Jose comes down and kicks Aries’s ass. Good – Jose needed a serious edge, and got one here. 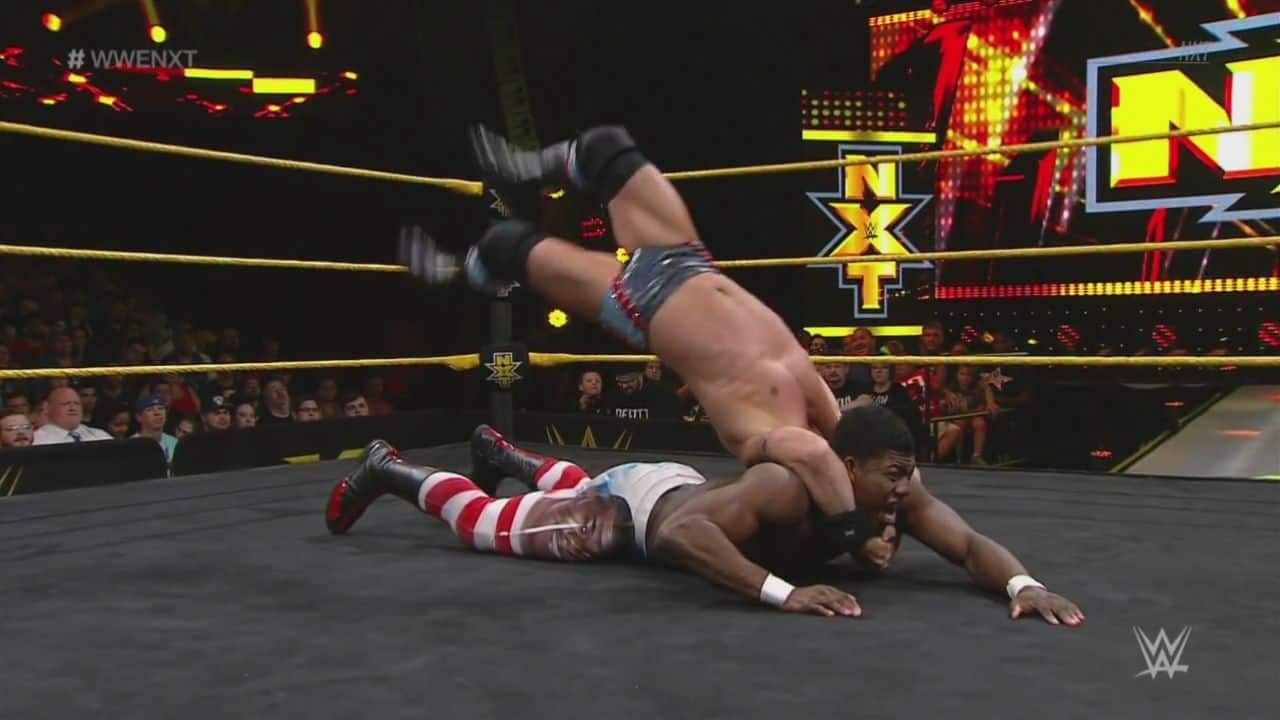 Nia is out and then Bayley gets a nice pop. Nia dominates and hits Snake Eyes in the corner before clubbing away. Bayley is playing a Ricky Steamboat-esque babyface here, always getting in a shot or two and always giving you hope. Bayley bonks her into the buckle and forearms her before another big buckle smash. Nia recovers and gets a long cobra clutch. Nia chucks her to the floor and Bayley comes in at 9.5.

Nia goes to the well once too often and Bayley counters her and sends her to the floor. Nia goes for a hip attack into the steps, but misses. Don’t do that – your hips will regret it in 10 years. Another 9.5 count and a rope stunner. Bayley lands some draping knees and a crossbody off the top gets 2.Nia goes for a powerbomb, but Bayley turns it into a victory roll for 2. Nia charges her against the ropes and goes up for a splash off the second rope, but Bayley climbs up and gets a Bayley to belly off the second rope to win! 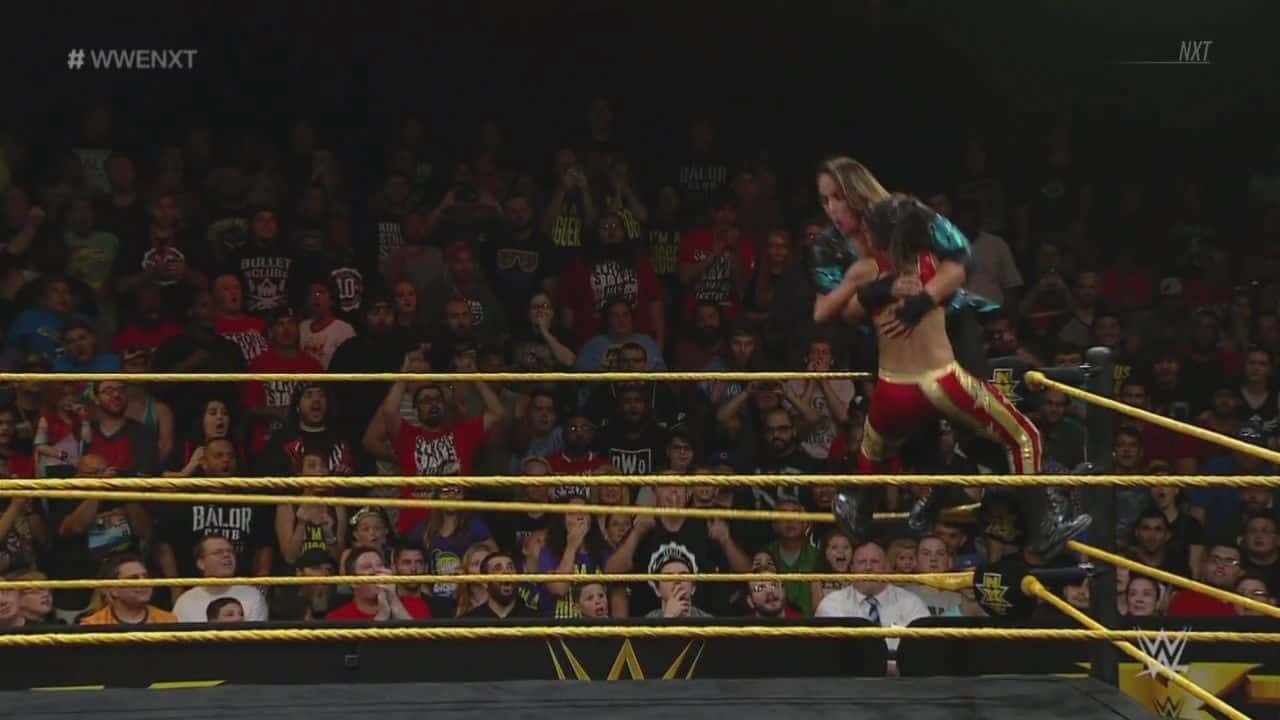