The show opens with a fancy Impact Wrestling logo showcase and we see Jeff narrating over breaking his leg, while Matt says this is the place in geography is where their team became broken. Matt says he wants Jeff to try his jump again and Matt calls him an obsolete mule. Jeff starts the jump , but we cut to ringside. Lashley comes out and we see Moose’s debut from last week. Lashley calls out Moose, but gets Bennett instead. Moose comes out and then Eddie does and we get a four way brawl. Dixie talks from her office and tells them to stop this because if they don’t, Bennett is fired. 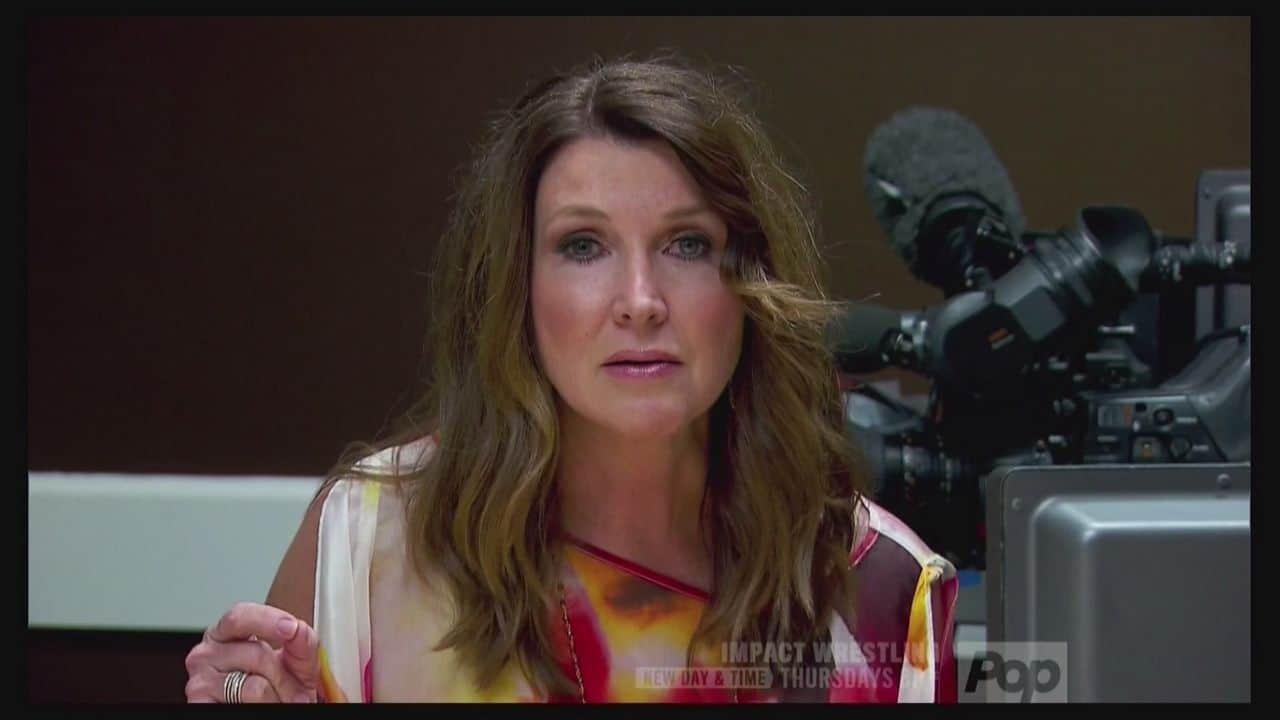 Dixie makes Jeff vs. Bennett, but Matt says that Jeff is obsolete and TNA owes him money for showing Jeff’s image. Matt throws to more foo-tage – a recap of what we saw earlier and then some new footage. Jeff fails and takes a back bump on the dirt. Matt tells Vanguard 1 to play a new theme for Jeff “Obsolete”, complete with Reby yelling “obsolete” once the one line in the song ends. Jeff gets punched on his now-bad arm and he shudders. Jeff can’t even get an Irish whip. Mike locks on a Fujiwara armbar, and then beats him with a cutter.

Matt yells at Jeff to leave because he is weak. Matt finds out he’s facing James Storm and lets out an “OH SHIT”. Matt’s back to working in his white and red pajama bottoms. Storm hits a neckbreaker and Matt goes to the floor to hide. Storm rides the boozer cruiser into Matt’s balls. After a break, Matt bites Storm’s forehead and hits forearms for 2. Josh rattles off some ad copy about Big Brother After Dark in the least convincing manner humanly possible. Storm gets a backstabber and goes for the superkick, but Reby hits his ankle with a hammer and Matt hits a Twist of Hate to win. Matt’s theme plays, leading to Reby playing it on an imaginary piano and rocking out. That was easily the best part of the show so far. 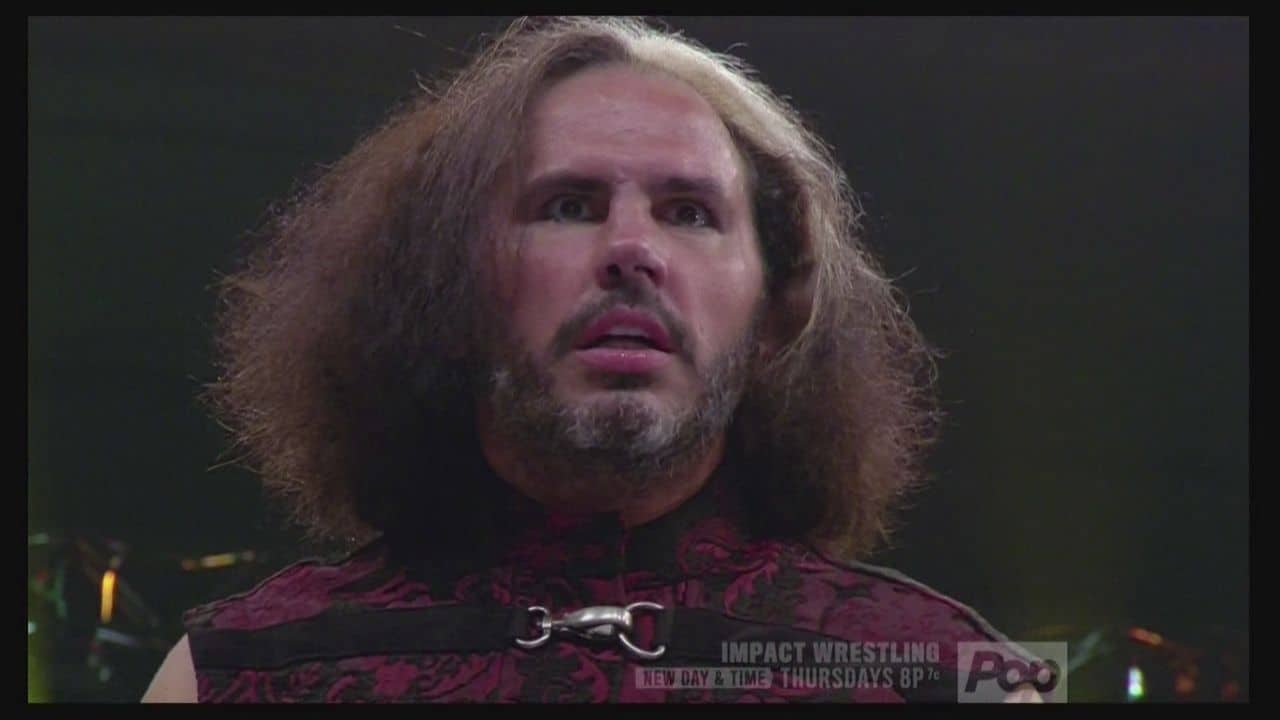 Eddie Edwards is backstage in red paint with a green belt looking ridiculous. He thanks Dixie for the match and says that Mike and Moose know that they’ll be fired and there will be a winner tonight. EC3 highlight reel airs showing him beating all of the legends that have left TNA since he started here. Bennett whines to Moose about how he writes his own destiny. Moose talks about how Dixie  isn’t gonna tell him what to do and then says he’ll beat up Lashley in the case before Bennett protests. Moose and Bennett have no chemistry together.

EC3 is mid-ring and goes to the steps for Ethan’s Corner to chat to the fans about his passion. Drew interrupts and says they each want to be in the BFG playoffs and says the brackets show they can only fight in the finals. Why we haven’t see brackets to this point, I have no idea. Eli comes out and says both dummy and yeah a lot. Eli says he’s EC3’s opponent – which is good, because I forgot this was originally a match. 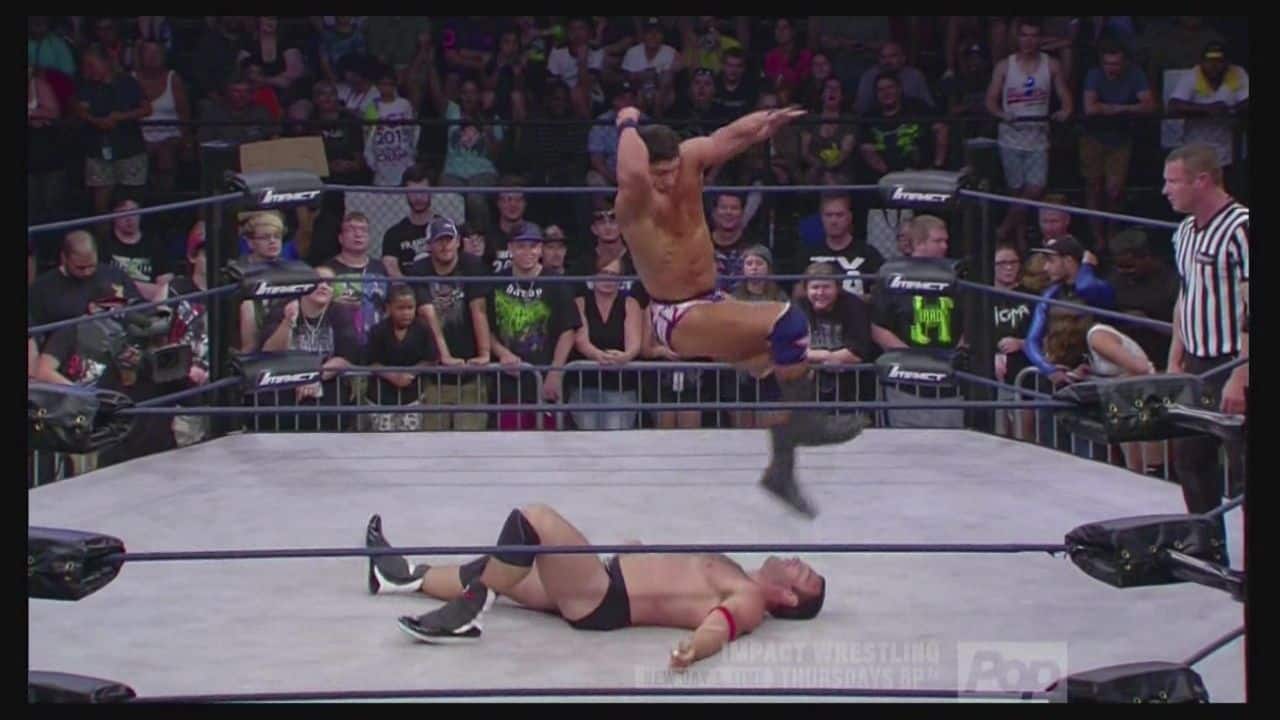 Eli and EC3 exchange arm wringers, but EC3 wins that little war. Pope calls Moose the “OMG – One Moose Gang”. Eli hits a back elbow after Josh hypes up being a “T-Ein-A VIP”. Eli misses an elbow drop and hits an E-C-3 elbow. Josh talks about the Fight Network app, his show on it, and then Pope buries the show saying he accidentally almost watched it once. How very weird to bury your own programming. Josh then compares the BFG playoff series to the NBA and NHL playoffs. TK3 gets 2. Eli hits a back suplex into a faceuster for 2. EC3 goes for a crossbody off the top, but Eli rolls through for 2. EC3 gets a cradle off of avoiding Blunt Force Trauma and wins. EC3 sings his theme for a bit. 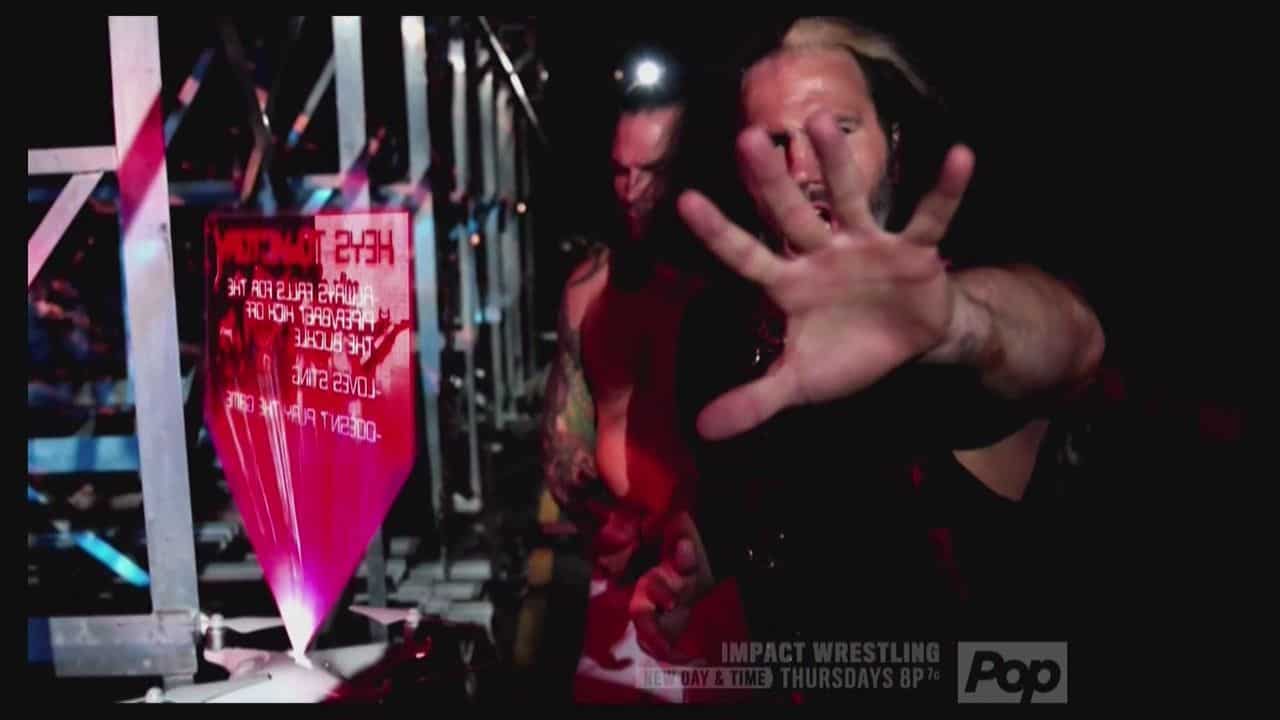 We go backstage to see Matt, Jeff, and Vanguard 1. V1 tells Matt that he will be facing EC3 via hologram. Drew faces Bram, and Drew has a new nickname – the Scottish Dragon. Allie tells Maria that her state of the knockouts address will be perfect. How? There are like five people in this division and two of them are in this skit. Maria tells her to shut up and stop kissing her ass and them Allie tries to meditate, but Maria is tired of it. Lashley says he’s here to beat people up and tonight, he’ll do that to Eddie and Moose. 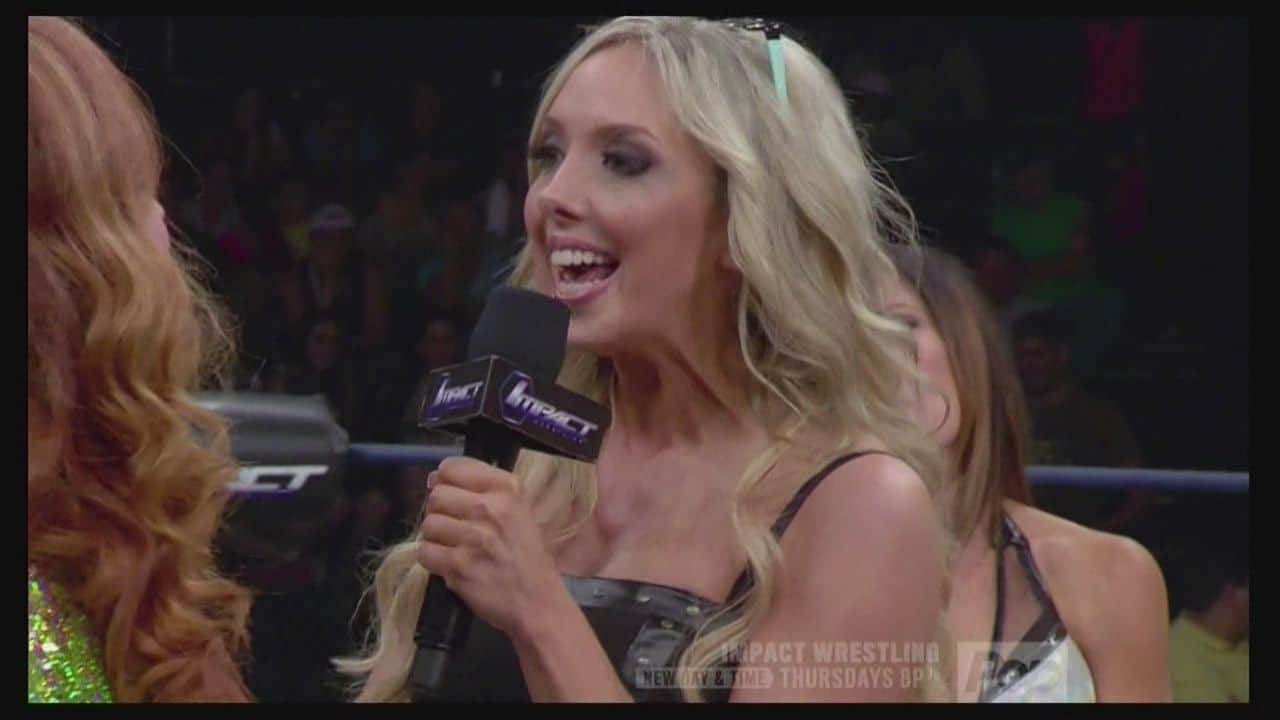 Allie is mid-ring with the other five women on the roster to talk about the division. Maria comes down in a green and purple glittery jacket. Her music plays as she apologizes for possibly making anyone feel small. Allie has a question that is really more like a statement – Maria is an inspiration and she screeches more while the fans yell “shut her up”. Jade stands up to Maria in a new Knockouts shirt. She calls Marti a bitch for costing her a title match and wants a title rematch. Gail says she won’t get a shot either, and Maria tells her she lost to Sienna twice. Then they argue over the title some more. Gail says she’ll run the gauntlet to get a rematch, and Maria agrees. Maria says that whoever beats Gail will get a reward. Jade says she is out of that and jumps Marti. Rayne jumps Gail to get her shot. Madison’s new generic theme played instead of her far better “Killer Queen” theme. 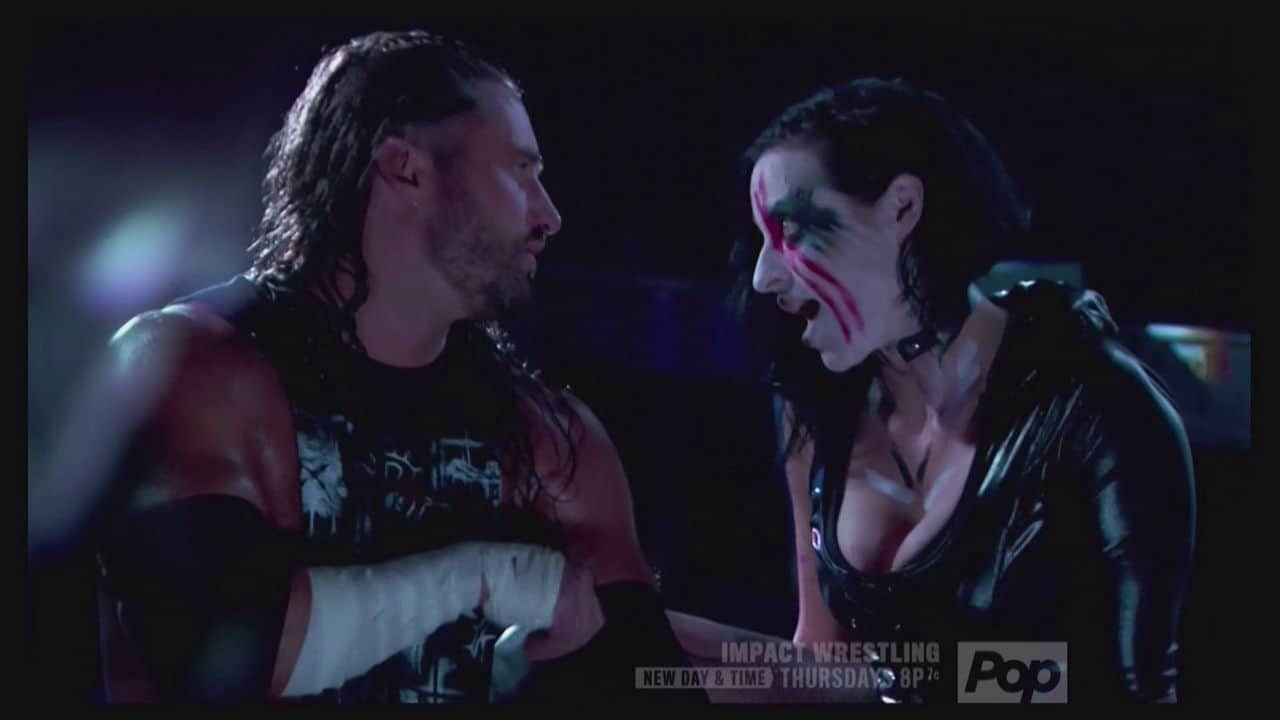 Bram meets with Rosemary’s cleavage while she tells him they’re changing and she wants him to win. He says he does too and they make out for a bit. Shera is asked about his thoughts for the BFG playoffs before The Tribunal jumps him. Bram is out to face Drew, and man does he look so much better with the trimmed beard. Josh says this has a “big fight feel”, but doesn’t really elaborate as to why. They butt heads for a moment before Josh reminds us that this is an extended episode of Impact. Josh talks about the NKOTB show and how one of them will pop out of a cake like a stripper. Pope says he wants to get on that boat and Josh just mocks him a bit and moves on. They brawl on the floor and Drew goes up top, but Bram stops him. 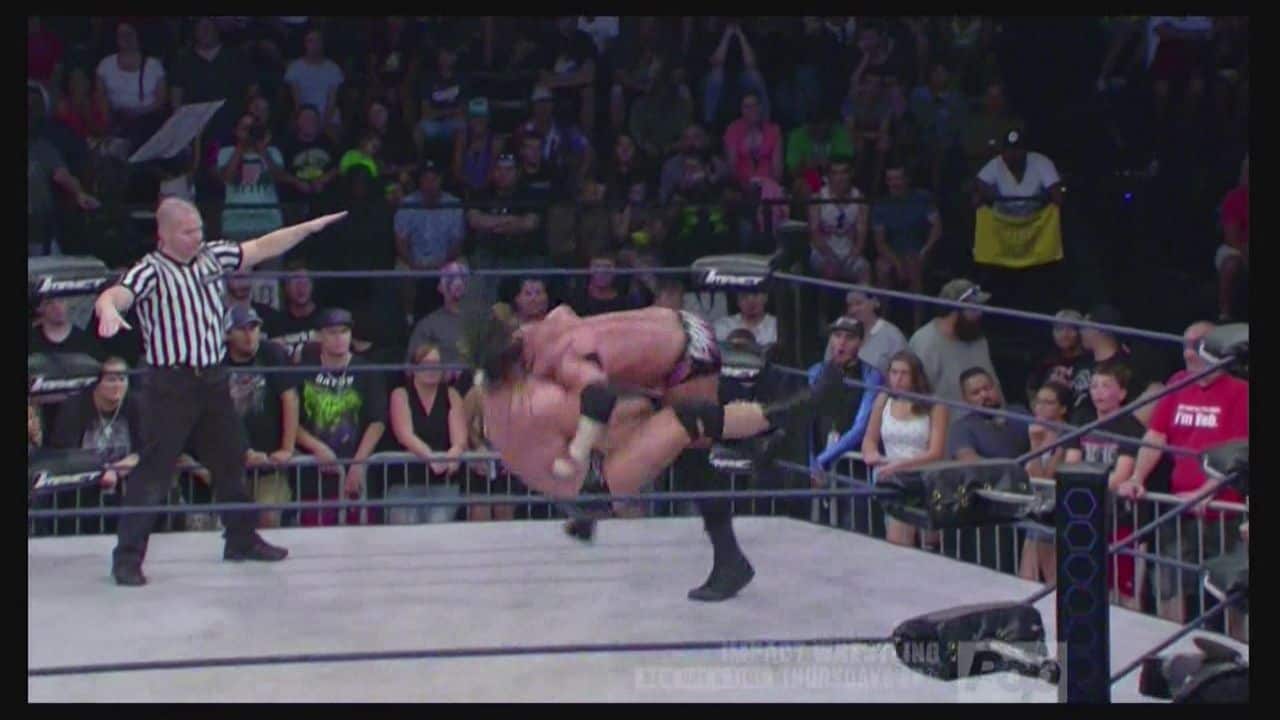 EC3 vs. Matt Hardy is hyped up for next week, while Drew faces Bennett. Bennett argues with Drew, who builds up issues between Bennett and Moose after one week. Eddie comes out and then Lashley does. They begin this fight on the floor with chops and Lashley lands some punches on the ground. Lashley kicks his ass more and tosses him into the ring. Eddie finally gets a slight edge by countering a corner charge with a kick.

Lashley destroys him for a while before going for an armbar and Eddie landing a jawbreaker. Lashley locks on a chinlock and grinds away until Eddie punches free. Lashley recovers and locks on a torture rack, but Eddie escapes and lands some machine gun chops. Lashley goes for a spear, but Eddie avoids it and Lashley eats the cage. Eddie eats a lariat and does a flip. Eddie recovers and tosses Lashley into the cage. Eddie climbs up and goes to escape, but Lashley grabs him and goes for a superbomb – but Eddie ranas him and hits the Boston Knee Party for 2. 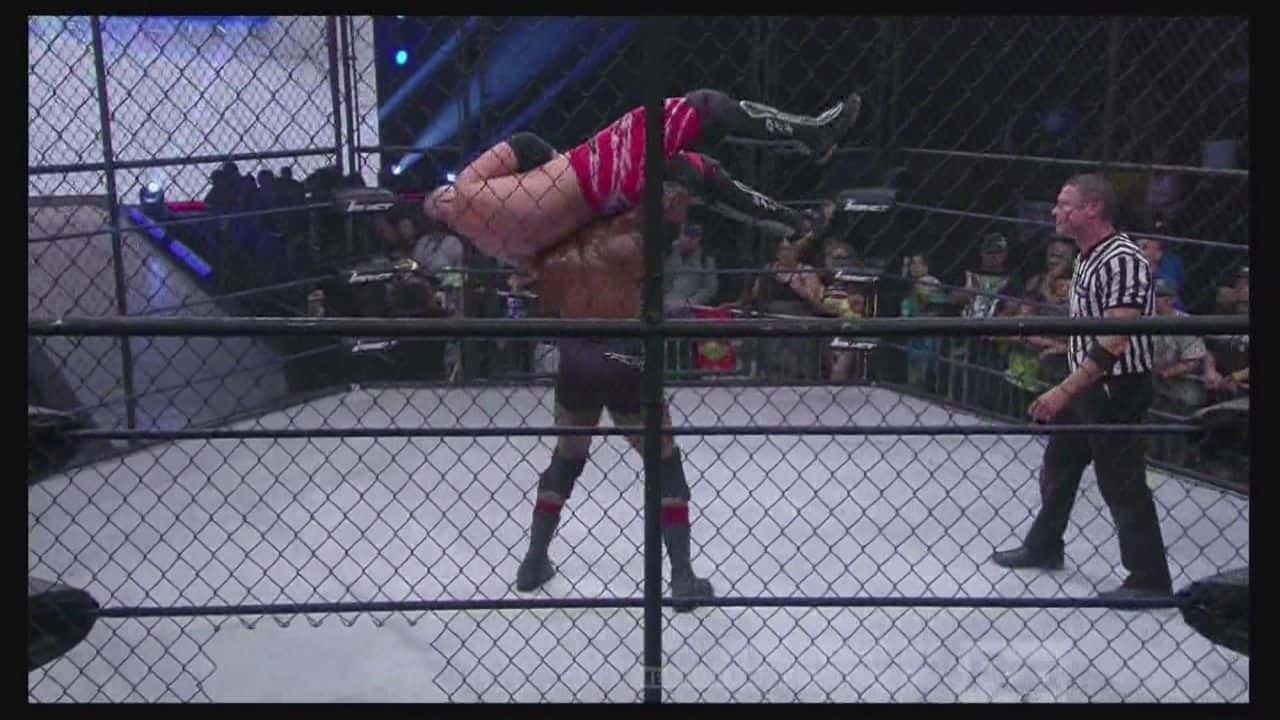 Eddie goes to leave and gets to the steps – but Lashley spears him off the steps to the floor. Lashley grabs him and throws him back in the ring before grabbing both belts. Eddie hits the Knee Party again knocking a belt into Lashley’s face for 2. Eddie goes up to the top of the cage, but gets knocked down gut-first on the cage by Lashley. Lashley superplexes him, spears him, and hits another to hold two titles at the same time for the first time in his career. Lashley picks up Eddie and goes for another spear, but EC3 runs down to save him. Matt comes down to attack EC3, and then Drew comes down before brawling with Bennett and Moose. 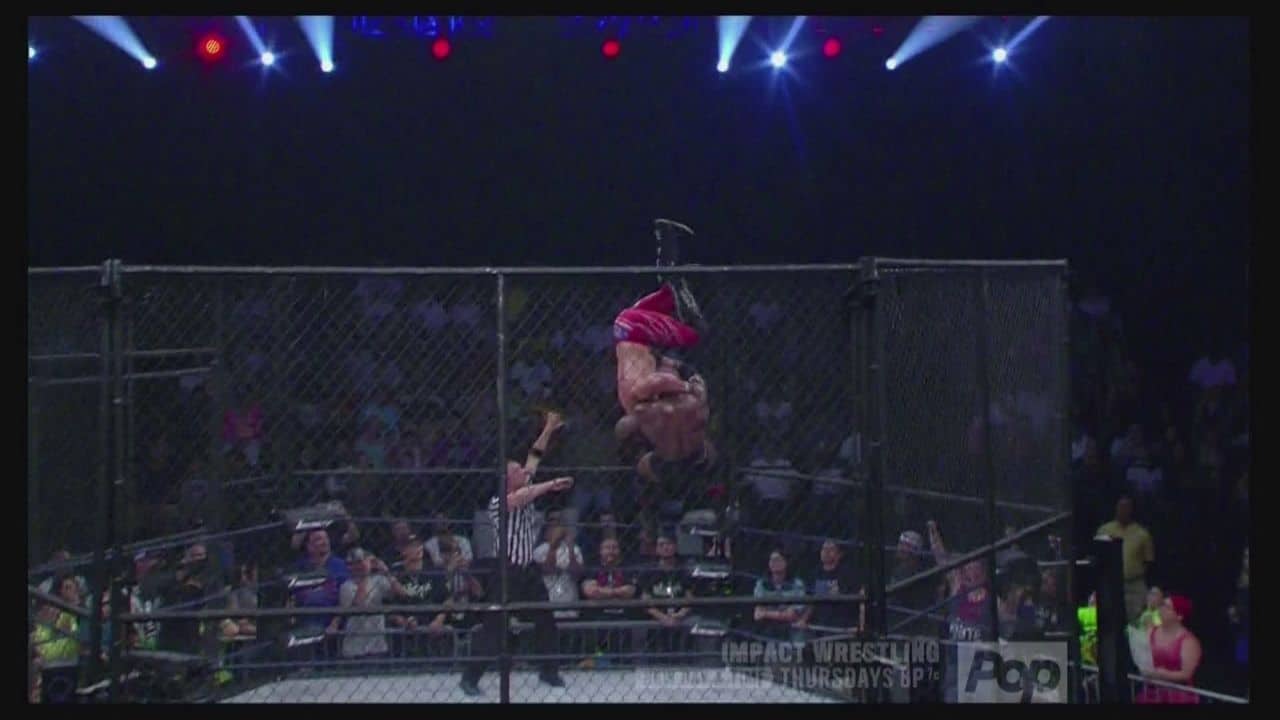