The Suicide Squad movie from DC Entertainment based on the DC Comics is set to hit the silver screen on August 5, 2016 with premiere events happening between now and then.

Well some of the Hot Toys products appears to revealed a major moment and scene from the Suicide Squad movie.

Looks like Jared Leto’s Joker will dress up as a twisted version of Ben Affleck’s Batman in the film!

A closer look at Joker-Batman. 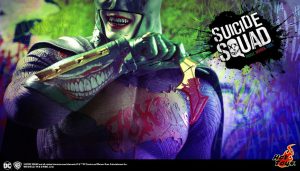 Should be a fun film!