Okay everyone, now that we have experienced yet another draft in WWE, thus splitting the rosters up I decided I wanted to look back on the original WWF Draft that took place in 2002.

The first WWE Draft happened after the Invasion storyline when WWF acquired WCW and ECW talent. With the roster bursting at the seams with talent so  it was decided that there would be a draft. Seeing as this was the first time a draft took place in WWF, where stars would be limited to their specific brand, the rules were laid out and fans watched anxiously to see where their favorite stars landed.

The draft took place on March 25, 2002 and the show opened with Linda McMahon, as she sat at a WWF desk from what appeared to be a remote location, and laid out the rules of the night. Fans at home saw that the entire roster was in a room, watching the remote broadcast as well, hearing the rules themselves and waiting to see who would be drafted where. Ric Flair was in control of Raw, Vince McMahon was in control of Smackdown! and only twenty picks would be made live on the Raw show.  A lottery will be held on Raw to determine the placement of all other performers and the results are effective on the following Raw.

Due to the Triple Threat match that night on Raw neither Triple H, Chris Jericho or Stephanie McMahon would be eligible to be drafted and Stone Cold Steve Austin was named a free agent and would be free to sign with either show at his discretion.

Tazz v. Mr. Perfect: The match was okay, although short but it was well done for the limited time. Tazz, always known for his submission abilities won with his Tazzmission maneuver and made Mr. Perfect tap out.

Trish Stratus v. Ivory: Another quick, 3 minute match. This was at the time Trish began upping her in-ring game and picked up the win after hitting the Stratusfaction and pinning Ivory.

Hulk Hogan & The Rock v. the n.W.o: A good match overall, the tension between the teams was good. A few hot tags and when it looked like they would lose Kane came out to help Rock & Hogan beat down the n.W.o. This resulted in a DQ win for the n.W.o and seemed to be a ploy on Flair’s part to ensure that the n.W.o. go the message that they cannot intimidate Flair.

Jeff Hardy v. Billy Gunn: Billy Gunn was aggressive from the outset, Jeff used his quickness to get the upper hand until a distraction from Chuck at ringside lead to Jeff missing the Swanton. Billy shouted at Rico to get the title belt to use it as a weapon but when Rico turned with the belt he was met with Lita and a hurricarana. Meanwhile in the ring, Jeff rolled up Billy Gunn for the win.

Kurt Angle v. Rob Van Dam (WWF Intercontinental Champsionship): the match started with Angle being aggressive in an attempt to impress Vince McMahon and win the title and bring it to Smackdown. The match was okay but the referee was knocked down, the ref called for the bell, Edge ran out and beat up Kurt Angle and there was no real winner or loser here, except that it was clear that RVD kept his title.

Stephanie McMahon v. Chris Jericho v. Triple H: A weird match with Stephanie in the mix. A stipulation in place said that if Triple H pins Stephanie she leaves WWF altogether. Stephanie applauded Chris Jericho’s entrance and the two seemed to be on the same page, forming an alliance against Triple H. Most of the action was between Triple H and Jericho but Stephanie did try a few pins herself throughout the match. Both Triple H and Jericho each took one of the Undisputed title belts and hit each other at the same time, each of them down on the mat. Stephanie first tried pinning Triple H before he kicked out, then tried pinning Jericho before he too kicked out. Stephanie then tried to mount an offence but was slotheslined , Jericho then put Triple H in the Walls of Jericho which Stephanie broke up.  Jericho dislodged Stephanie from his back, was Pedigreed and nearly pinned by Triple H until Stephanie broke up that pin. Jericho rolled out of the ring and Stephanie received a spine buster from Triple H before he pinned her for the three count. This meant that Triple H remained the Undisputed champion and that Stephanie was to leave the WWF. 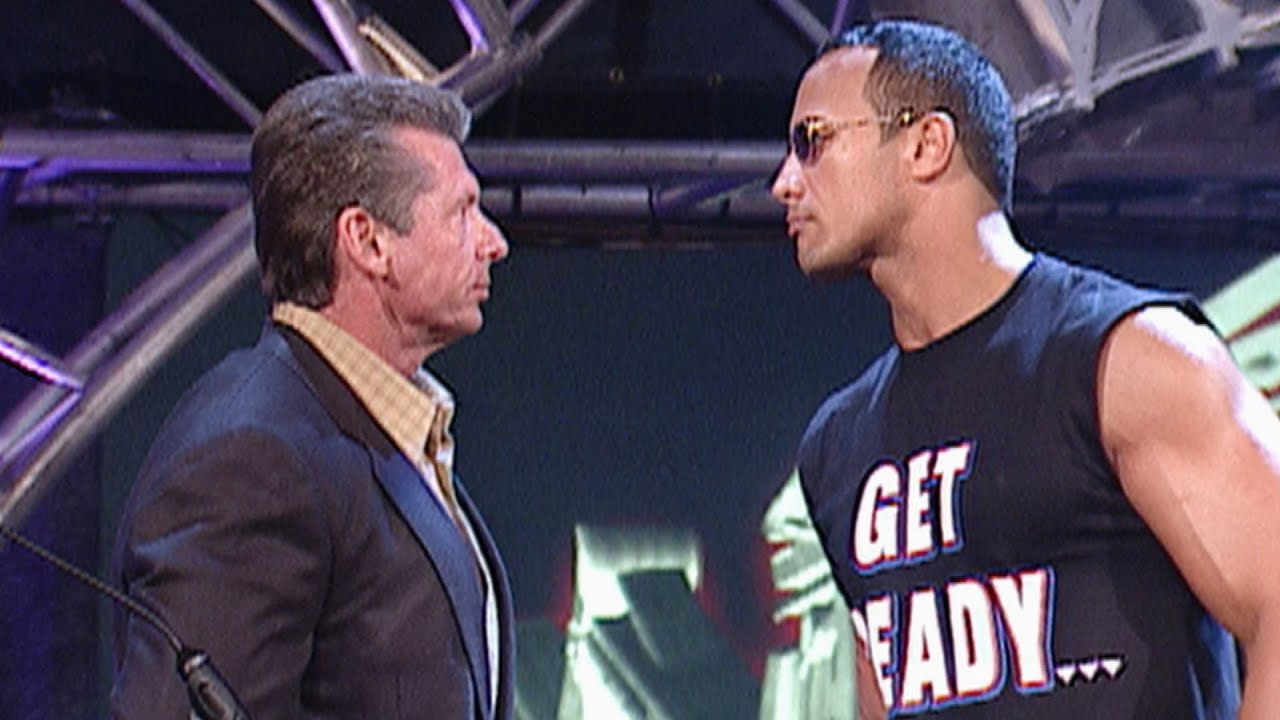 1, After being picked first the Rock came out and was greeted by the fans. Mr. Machon said he had things to get off his chest, saying there would be rules i.e. The Rock could not put his hands on Mr. McMahon. He could not discuss putting his foot up anyone’s candy ass. He could not use the phrase “It doesn’t matter”. Vince mocked the friendship of Rock and Hulk Hogan. Vince said he “made” Hulk and the Rock. However, The Rock had a response.

“Are you done? Are you through running your mouth?” Rock ran through his usual gimmick on the microphone. The Rock said on his last Raw he wants to go out with a bang.  He ran down his historical moments on Raw and said it was the people that made the Rock. He then got the entire audience at Penn State to call Vince McMahon an asshole (directing one side to say “You are” and the other side to say “an asshole”) in perfect  order.

2. The Undertaker, unhappy with being drafted by Raw and threw his chair in anger before exiting the backstage area. See it here. He then went to Vince and shouted “you told me Flair would not pick me!” Vince said he would make it right and Undertaker threatened that he had better keep his word.

3. Kurt Angle whines at Vince about not being picked first. He continues to do so until Vince picks him as the third overall pick.

4. Flair drafting the entire n.W.o group (the animosity between them and Flair made the pick a surprise.) The n.W.o. told Flair that they listen to Vince only, Flair stated that they work for him. He also stated that they would need to deal with his next pick, Kane, who would be helping keep them under control.

5. The fans are still chanting “You are an asshole!” at Vince whenever he comes out.

6. Vince confront Flair about The Undertaker and the n.W.o and about Kane interrupting the previous match. Flair said he didn’t need to explain anything anymore. During this confrontation they quickfired a few draft picks.  (Booker T, Edge, Big Show, Rikishi)

7.  Ric Flair drafted Bubba Ray Dudley and in an attempt to one up Flair Vince McMahon drafted D-Von Dudley, thus splitting the tag team. In the locker room Bubba and D-Von were visibly upset before shaking hands and embracing each other.

Vince tries to reason with Flair and offers him two picks for letting him pick Lesnar out of turn – Flair turns him down.

8. Vince tried to pick Brock when it was not his turn so Flair came out and said “You’re not changing the rules, it’s my pick, and I pick Brock Lesnar”. As a result Vince picked Mark Henry. Flair picked William Regal. To snag a champion for his show Vince McMahon picked Maven.

9. Final pick of the night is Lita. Vince, mockingly said “In his last pick chose a woman, Lita. What’s the matter with you? The only  reason why you chose a woman is because you are a lascivious pig.” See the moment here. Vince continued to say Flair would ruin Raw and that he was sure Stone Cold would come to Smackdown.

Flair says “I think this tremendous audience has said it best all evening long” and the fans joined in with shouting “You are an asshole!”

10. Triple H leads the crowd in singing “Na na na na hey hey heyyy, goodbye!” to Stephanie as she is dragged out of the building by security.