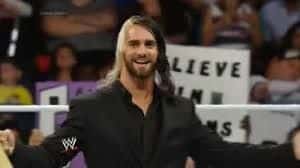 On breaking John Cena’s nose last year: “I remember I just crushed his nose and he was just disfigured and dismembered. I was shocked he made it to SummerSlam healthy as he did… I apologized profusely. John Cena and I wrestled a million times and every once in a while you’d get a clunker in there but this one was just for some reason, I just made real contact with his face, and rearranged it pretty bad…Wrestling is as real as it gets when it comes to injuries.”

On his match with Sting at Night of Champions: “That was certainly not planned to be his final match, but either way it was an honor. He’s an incredible dude. One thing about Steve [Sting] is that he’s one of the most humble superstars I’ve ever met.”