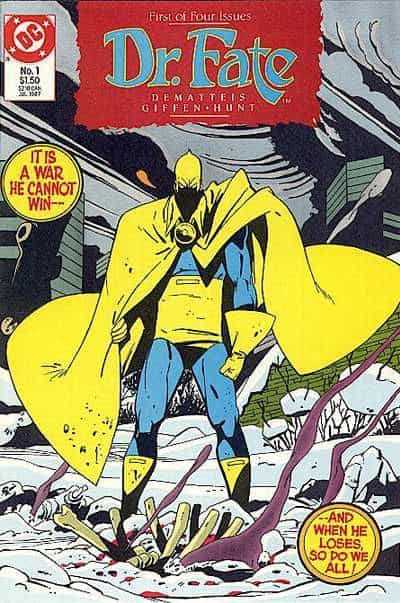 Spoilers (from twenty-nine years ago)

I just finished reading the first twenty-four issues of the second volume of Dr. Fate, and I was struck by how dependent that entire run is on this miniseries, which came out a year before.  Despite always liking Fate, and having always been a huge fan of this era of Keith Giffen’s art (a little more experimental than his Quiet Darkness era on Legion of Super-Heroes, not as abstract and weird as say, Trencher), I never read this comic.

The day after I finished issue twenty-four of the ongoing series, I was in a comic store in a small town on the way to somewhere, and I came across the miniseries, for only a dollar an issue.  It felt, if you pardon the expression, like Fate, so I had to pick it up.  That means that this column is out of order, but that also provides a rare chance to look at how the writer, JM DeMatteis, set up his longer story, while still (hopefully) telling a complete story here.  Let’s take a look and see what we can find.

I really should have read this miniseries before reading the ongoing, but DeMatteis did such a good job of recapping it throughout the series, I didn’t feel like I missed much. 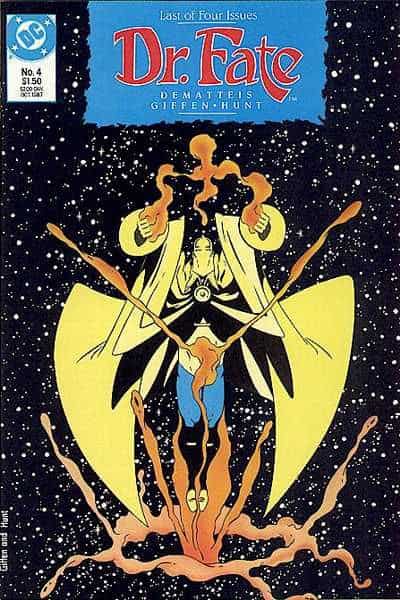 It’s interesting to put this mini, and the book that followed it, into the context of DC Comics in the late 1980s.  The inside cover of each issue listed the DC Deluxe Checklist, a listing of other titles in DC’s Deluxe format (how I miss both the New Format and Deluxe Format, which were much more of a pleasure to hold and read than today’s comics), and I saw that this book came out at the same time as the end of Watchmen, during a period where DC was reexamining its characters, and reintroducing them in the wake of Crisis.  This stuff is contemporaneous to O’Neil and Cowan on The Question, Byrne on Superman, Baron on Flash, Moore on Swamp Thing, and Ostrander on Firestorm, just to list things that were clear from this checklist and house ads.  I’m not sure that DC has ever been as exciting as it was during this very fertile period of time.

Clearly, this book is not remembered or spoken of in the same way as any of those runs, but there was a charm to this comic.  I see how DeMatteis laid the groundwork for his upcoming exploration of organized religion and the concept of a singular god, but avoided all of that stuff in this miniseries, which is much more focused on adventure.

DeMatteis and Giffen are a known quantity, but this was early in their collaborative partnership, and things feel very different from their work on Justice League, which was coming out at the same time.  The characters in this comic may bicker, but it’s never playful or funny (although that was very common in the ongoing series).  Even when the League makes its appearance, there is no humour to it (which reminds me, how did the Phantom Stranger come back from the beat-down that the Typhon/Stoner Fate gave him?).

Giffen’s art has always appealed to me, but it’s really very strange.  He likes to draw very detailed foregrounds, with the superheroic action happening in the background, mostly in shadow.  In fact, for way too many talking heads pages, he either leaves a character’s face in shadow, of gives us an extreme closeup of only part of their face.  It leads to some pretty jarring storytelling, and often just what is going on is left unclear.  This style is something that I associate with the Five Years Later run on Legion of Super-Heroes (which is one of my all-time favourite comics runs), and I was a little surprised to see him employing it so early here.

One thing that I found interesting here was the way in which the Chaos-controlled Dr. Fate, which consisted of Typhon and Stoner, looked so much like Venom, the Spider-Man villain, with his wide, toothy grin.  What’s interesting about that is that Venom did not appear in full until 1988, a year after this comic came out.  I wonder if the way Giffen drew Fate here influenced Todd McFarlane in his design of that iconic villain.

Anyway, I’m glad I finally got my hands on this miniseries, but now it’s time to return to the regularly scheduled ongoing, to take a look at William Messner-Loeb’s run, which picked up where DeMatteis left off.

If you’d like to read my column about the Dr. Fate comics that came after this series, you can check this link:

Like the ongoing series, it doesn’t look like this miniseries was ever collected in trade, so you’ll have to either hunt it down like I did, or visit Comixology to read it.