The show-opening recap video focuses on Rusev and Roman – really making that seem like a huge deal. Rusev comes out and holds the show hostage, but Mick comes out and gets insulted. Rusev points out that Roman has done nothing to earn a shot at his title. He doesn’t want Mick and insists that Stephanie comes out – Corey sets up that Stephanie isn’t going to be on Rusev’s side, and of course Stephanie is now a babyface and puts over how Mick deserves respect for putting his life on the line. Rusev threatens to leave and go to SmackDown…so I guess that’s a thing they could do if they wanted. They really should have set up some ground rules so things like could be taken as either legit threats or idle threats. Roman tells him he’s sorry that he found the site where he found his wife and they’ll make one ugly baby when they bump uglies. Roman wants the title shot match, while Rusev says this isn’t just about the title – it’s about his wife’s honor and he wants to kick Roman’s ass. How is Rusev not a babyface here? 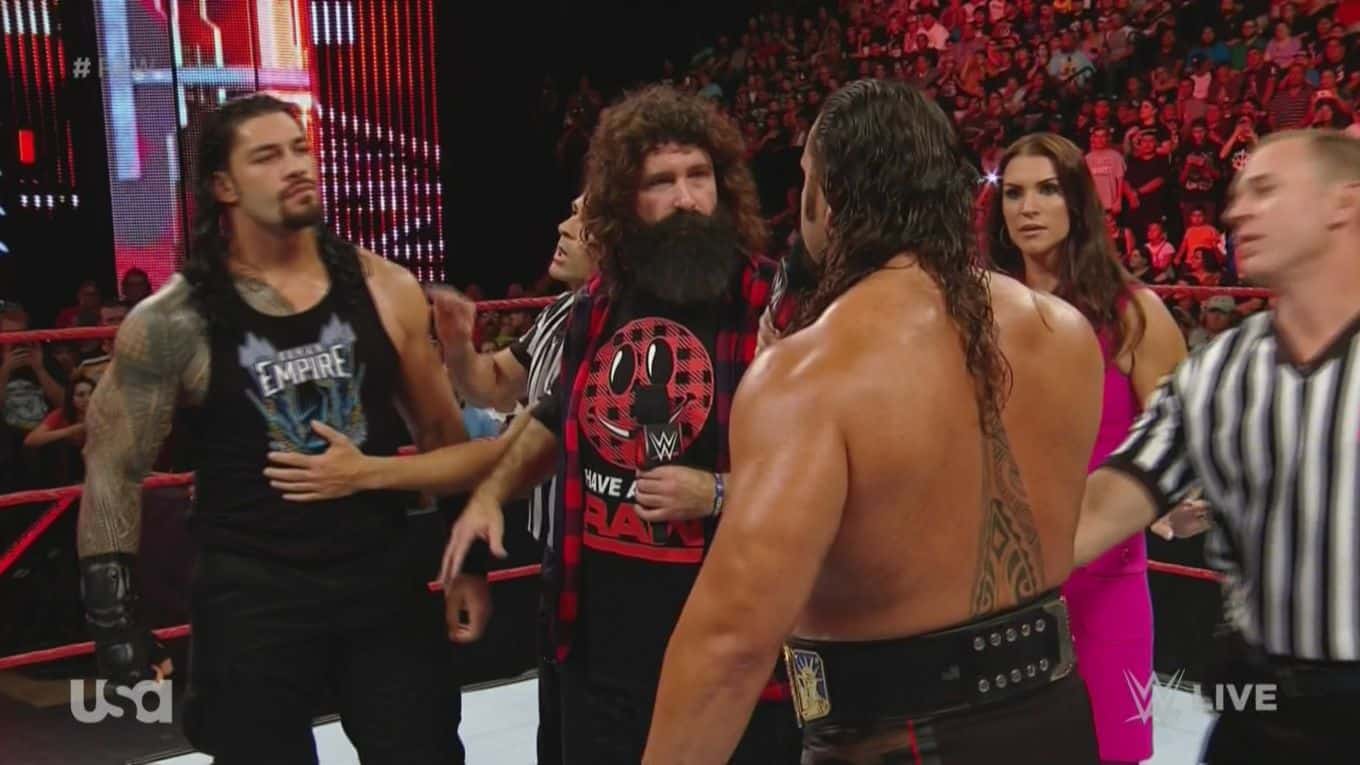 Mick says he can respect that and he makes Rusev vs. Roman Reigns to defend Lana’s honor. Cole recaps the Sheamus vs. Cesaro feud, leading to Sheamus vs. Sami tonight. Sheamus tells the fans that they paid to see him, but Sami means nothing to him. Things get ugly quick with a ground and pound scrap before the bell rings. Sheamus posts Sami face-first for an ad break. Cole asks Cesaro about being told that he can go to SD if he wants, but Cesaro has an about-face and says he now wants to be on Raw and wants to be on the flagship. Well, that cuts the balls off of his character. 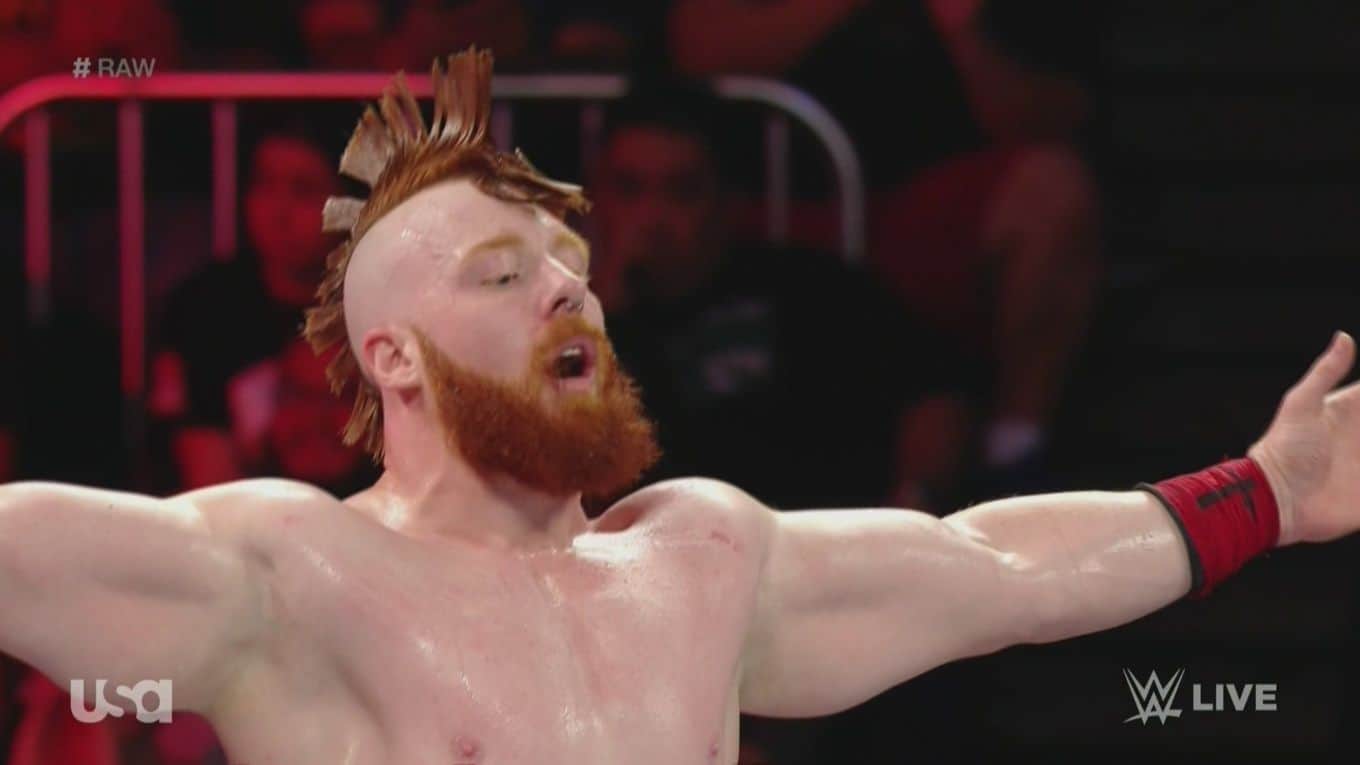 Having lots of weather issues here, and now Cole is just outright full of shit saying Cesaro vs. Zayn was ONE OF THE BEST MATCHES OF THE DECADE. White Noise, called the Irish Curse by Cole,  gets 2 for Sheamus. Sami gets 2 off a Blue Thunder Bomb, called a Michinoku Driver by Cole. Cesaro distracts Sheamus, who eats the Helluva kick and loses. Sami should at least be doing SOMETHING on the six-hour long Summerslam show. Tom Phillps meets with Jeri-KO, and Owens faces Cass tonight. Owens is hilarious. “There is no A or W in the word soft. I know that and English isn’t even my first language!” Love how they give poor Tom a billion names, with the best one being Nathaniel. SD is hyped up with ADR vs. Cena and Dean and Dolph being on MizTV…wow is that a sad state of affairs. 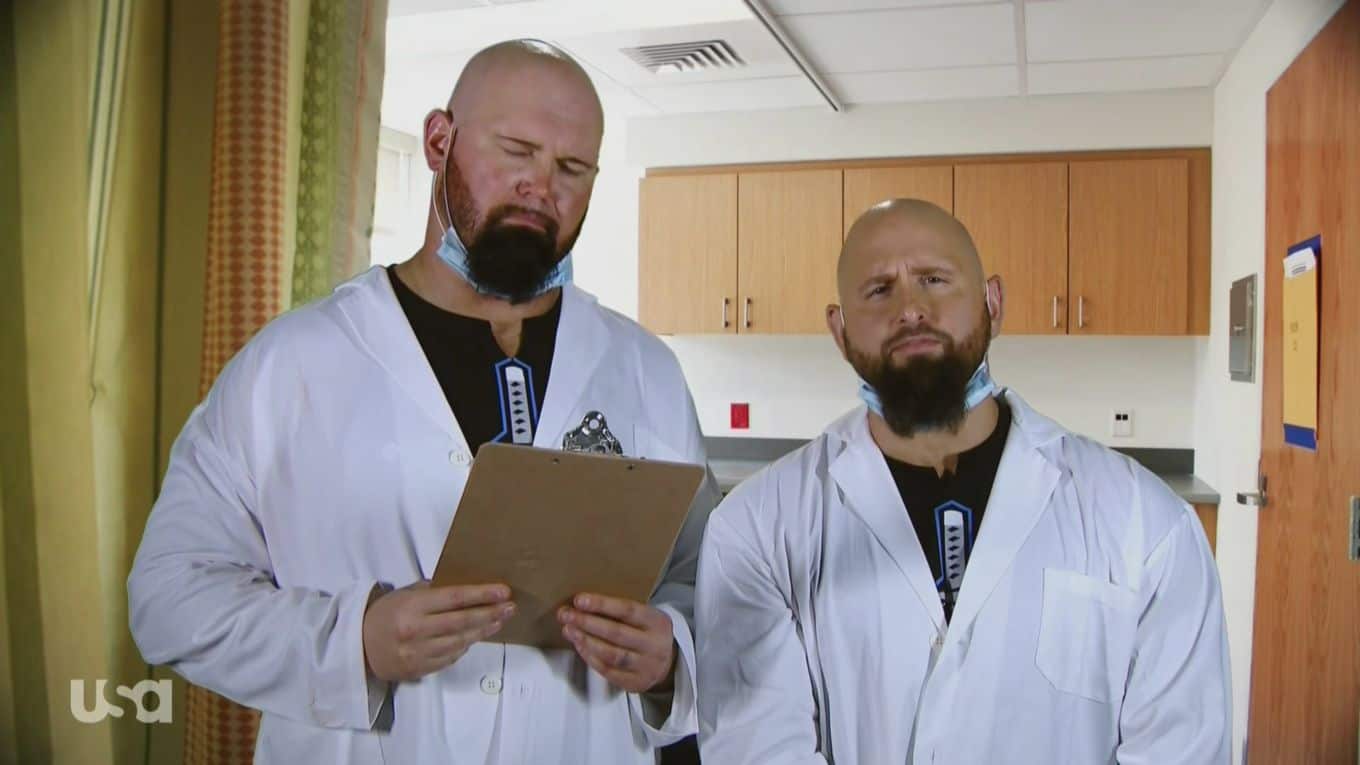 Sheamus and Cesaro bicker backstage before Mick yells at them and makes a best of seven series that starts at Summerslam. Well, that’s two months on the mid-card treadmill for them. Dudleys are out to face New Day. Doctors Gallows and Anderson make ball jokes in front of a green screen. They are well-endowed with medical tech, don’t want tainted results, and are one inch closer to a cure. Men were paid money to write that, and then someone had to take time out of their day to film it. Astonishing. Bubba dominates on Woods in the corner, but Devon eats the Trouble in Paradise and loses. Gallows and Anderson are back to say they need to break more balls. Cole rattles off buzzwords that no one has ever used to describe Nia Jax because she’s next. 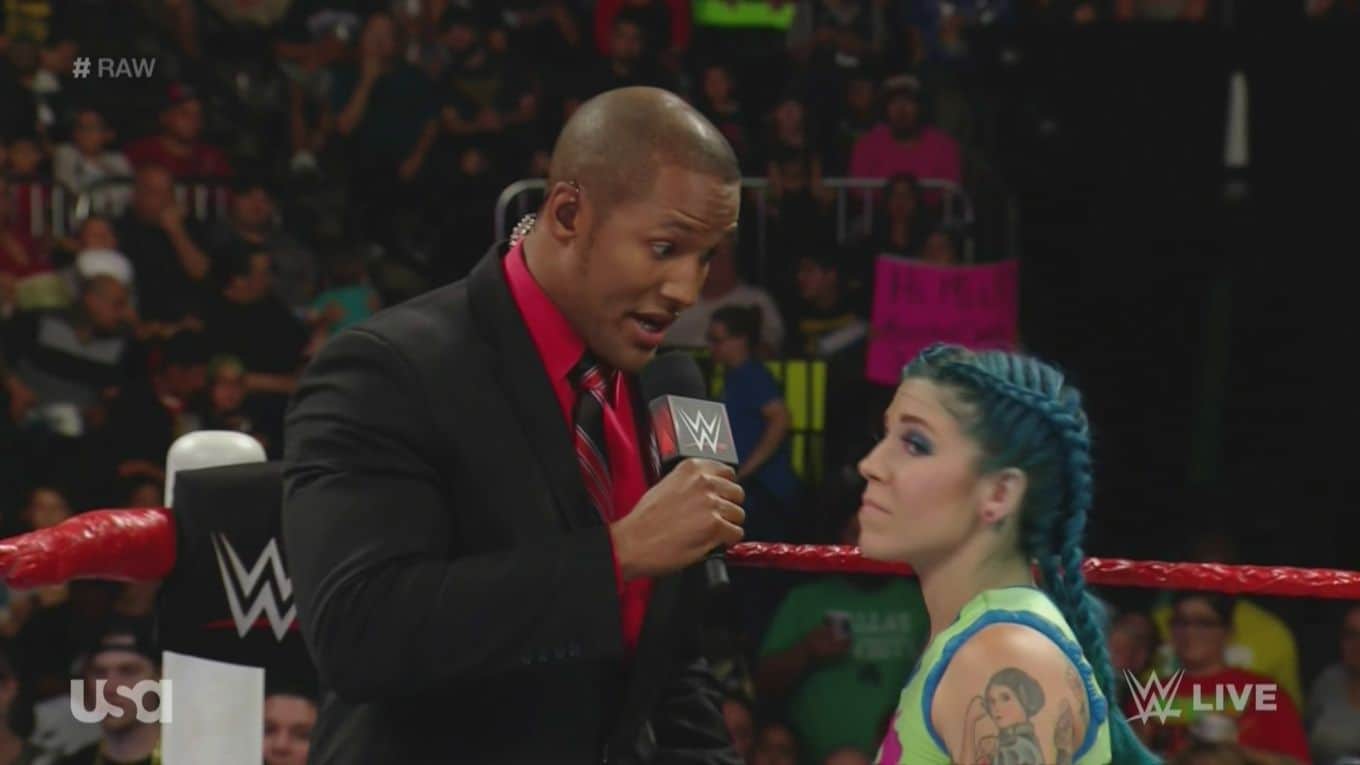 Seth is backstage looking for the Demon King and Neville tells him that he isn’t ready for the Demon King. Nia faces Rachel Levy, a blue-haired girl, who gets interviewed by Byron and squashed by Nia with the Samoan drop/World’s Strongest Slam combo. The key to not being destroyed is to seemingly avoid being interviewed by Byron. The Olympics are on a break, so Heyman is going to get Brock out next so the ratings don’t die a death. 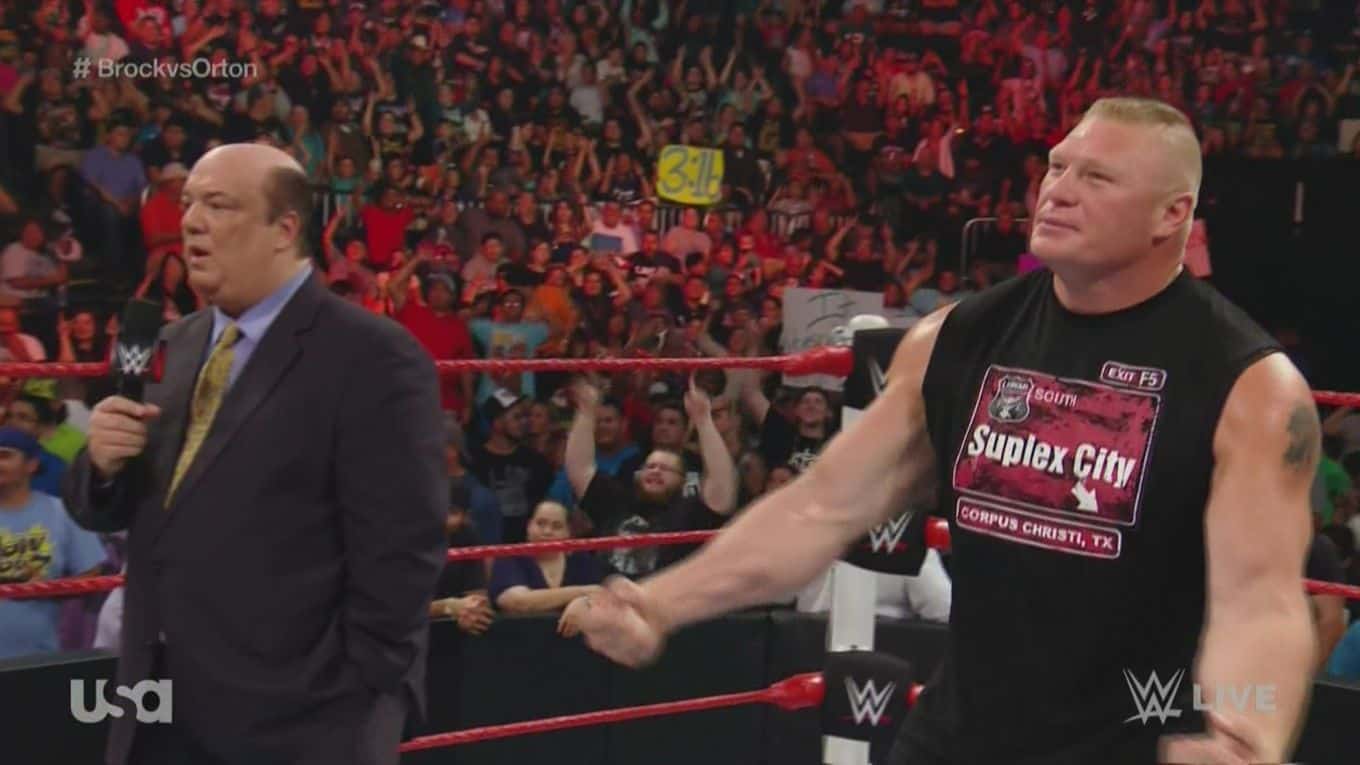 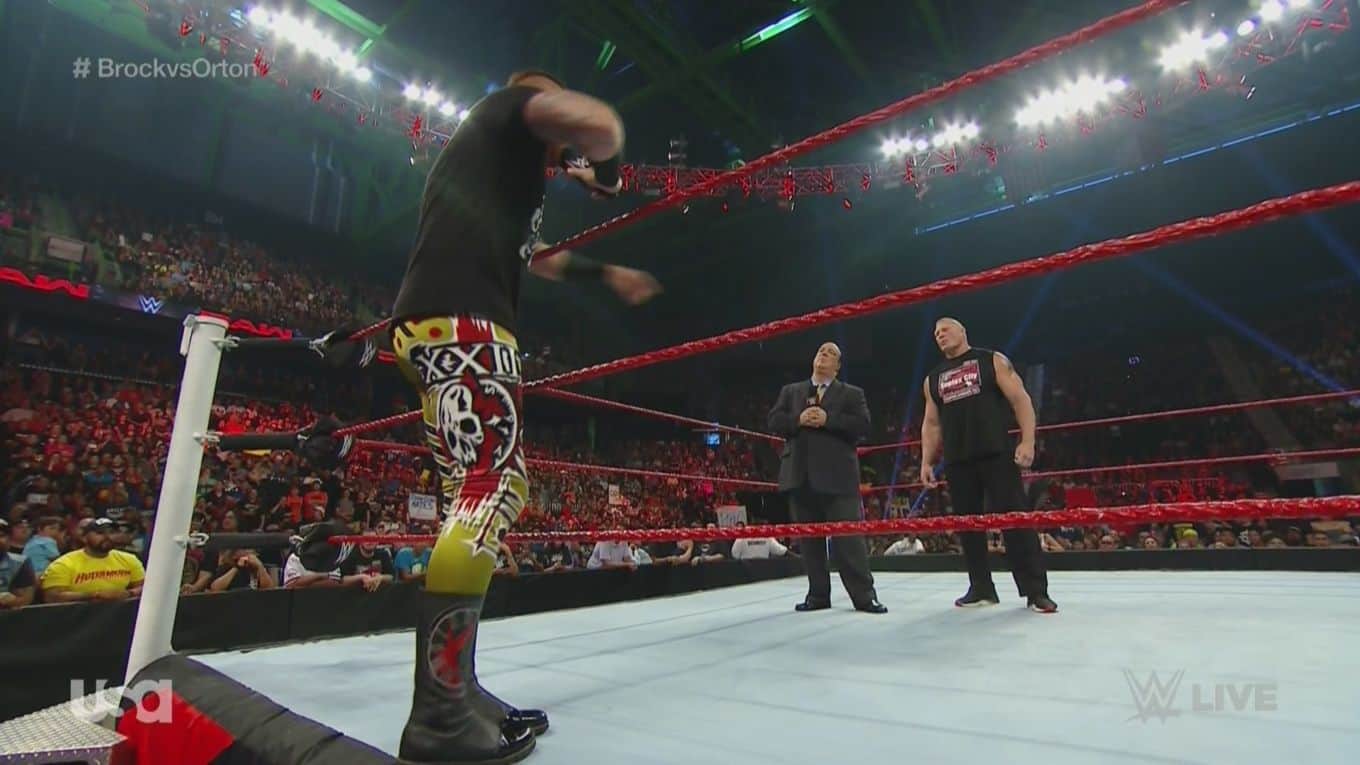 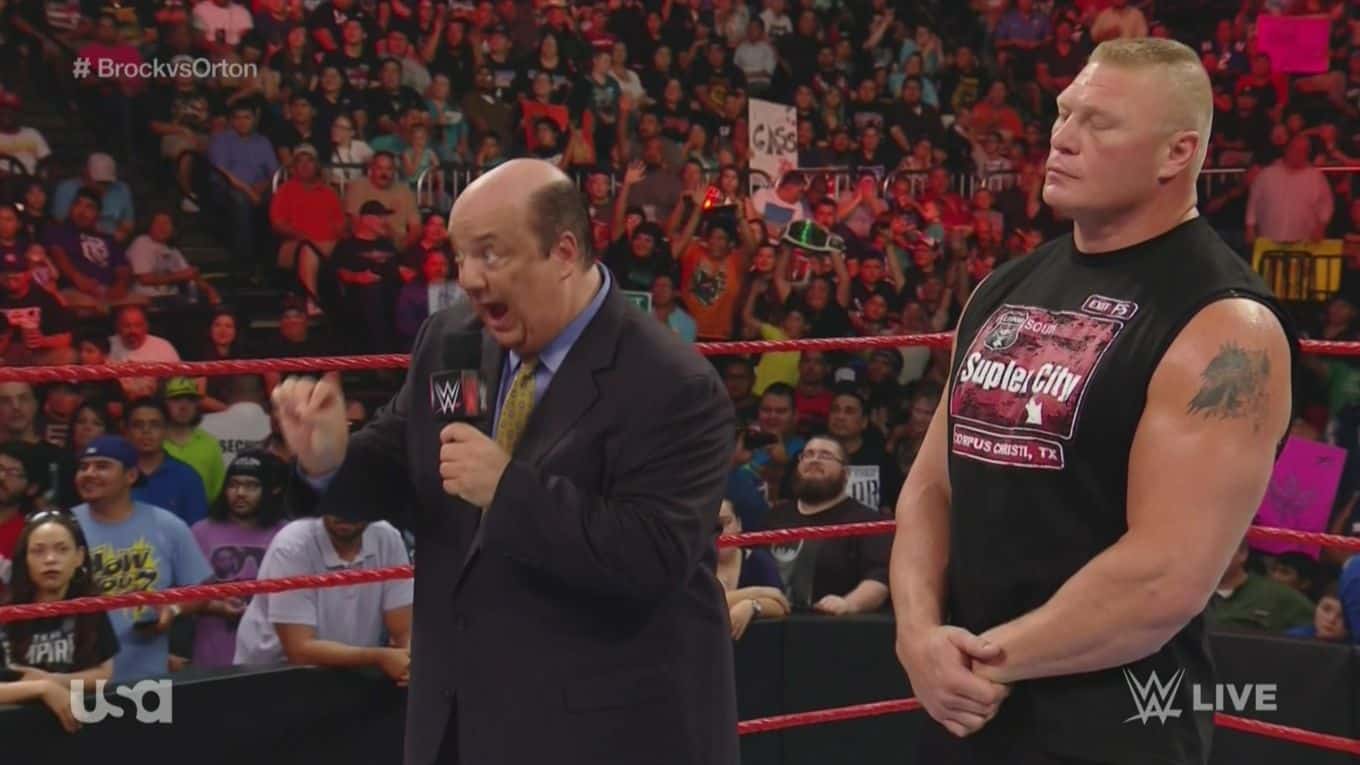 Brock and Heyman come down and before Heyman can speak, Heath comes out. Brock Lesnar is being paid six figures for a segment with Heath Slater…eh what the hell, why not.  Heath wants Heyman to be his advocate, and Heyman laughs this off. Heath is going to eat such a beating, and it’s going to be great. Heath wants a match and Heyman tells the camera man to shoot them and not Heath, so Heath yells to get their attention. This is actually working. Heath cuts a promo about having to take an ass-whipping from Brock to support his kids. Brock says he can appreciate his guts. This is already so much better than Brock vs. Dean at WM. 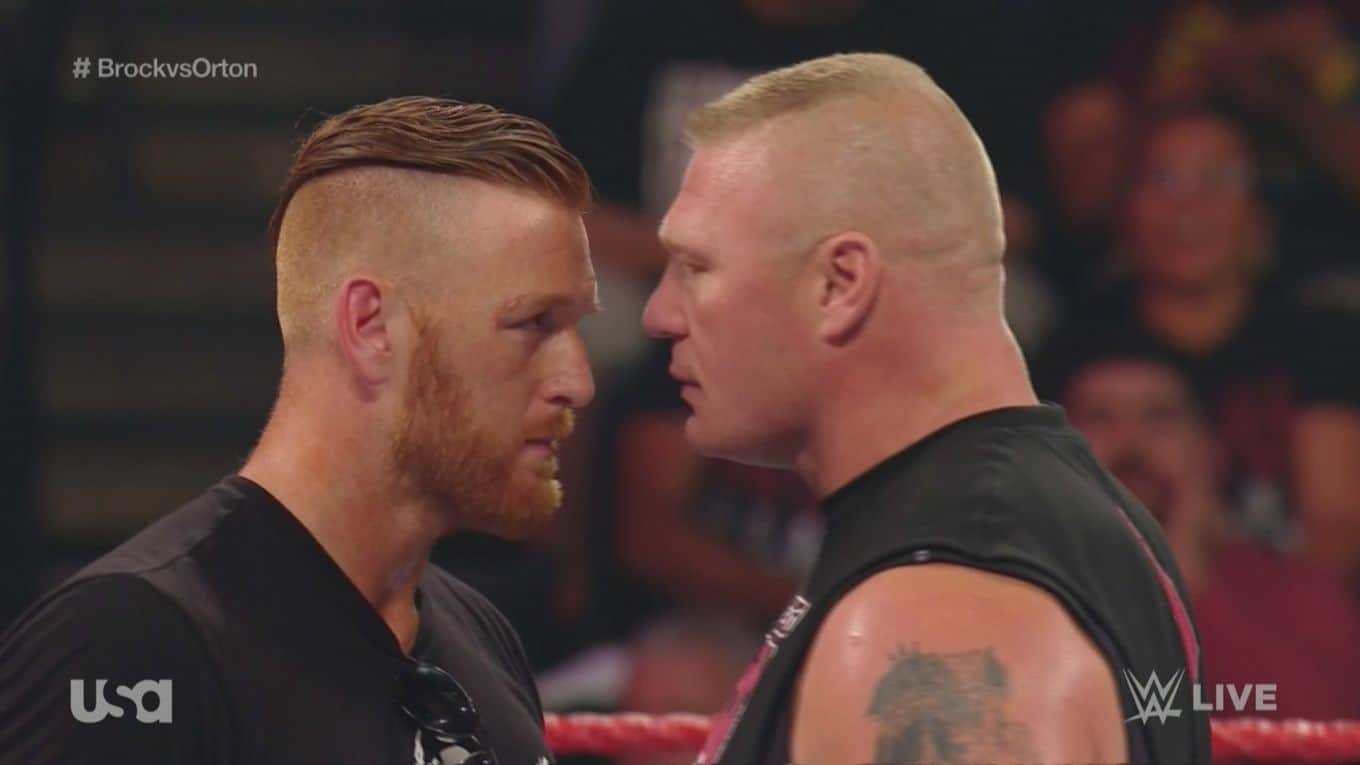 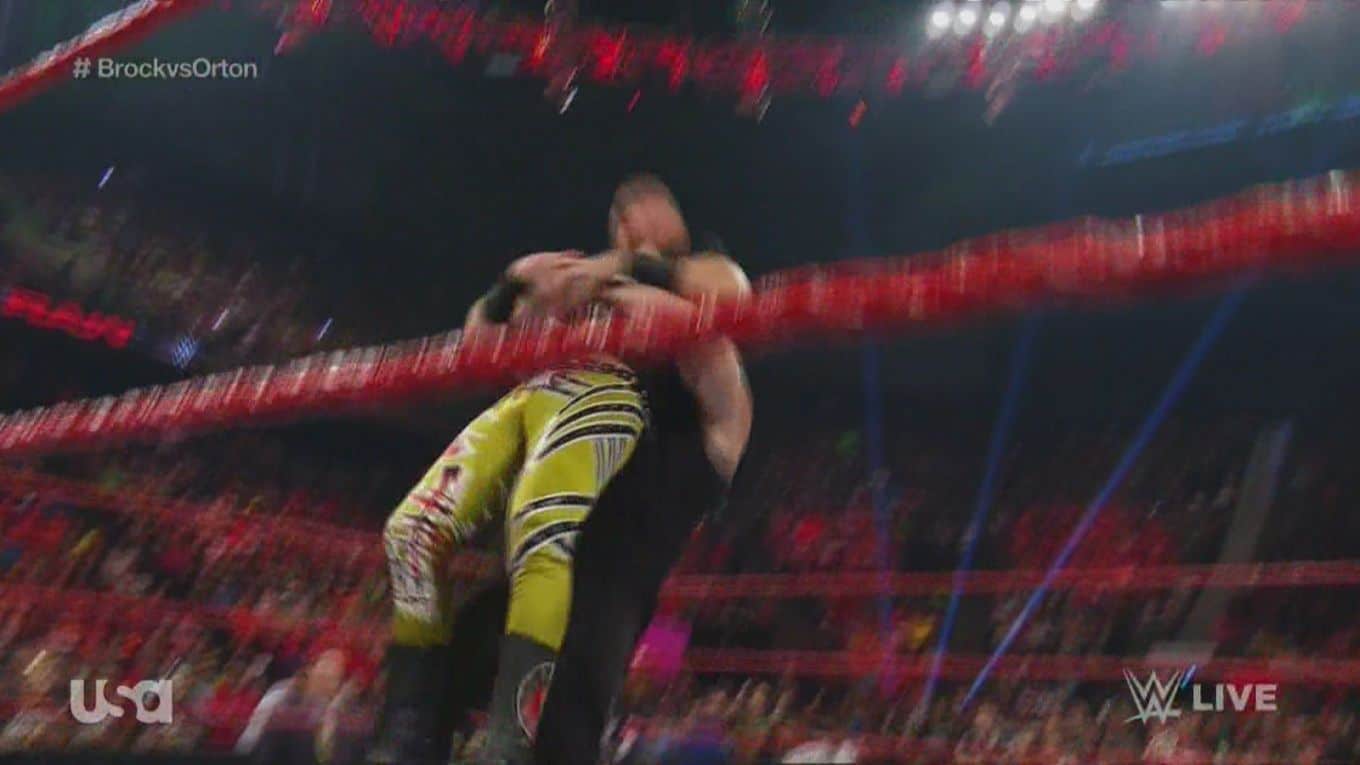 Brock tells him that he’s got kids too and come on in – I feel ya…but I don’t give a shit about your kids! Heath vs. Brock is legit the best usage of Brock all year. Heath goes for a lariat, but eats tons of Germans! YES! F5! Heyman puts over Heath at least being able to face Brock face to face – unlike Orton. Heyman says this is the summer of the conqueror and the beast is in heat. That must be why his levels were off. Clearly. Heyman hypes up seeing Brock live in action and calls him the Viper-Slayer. Heyman was on point here. Wow was this whole thing great. 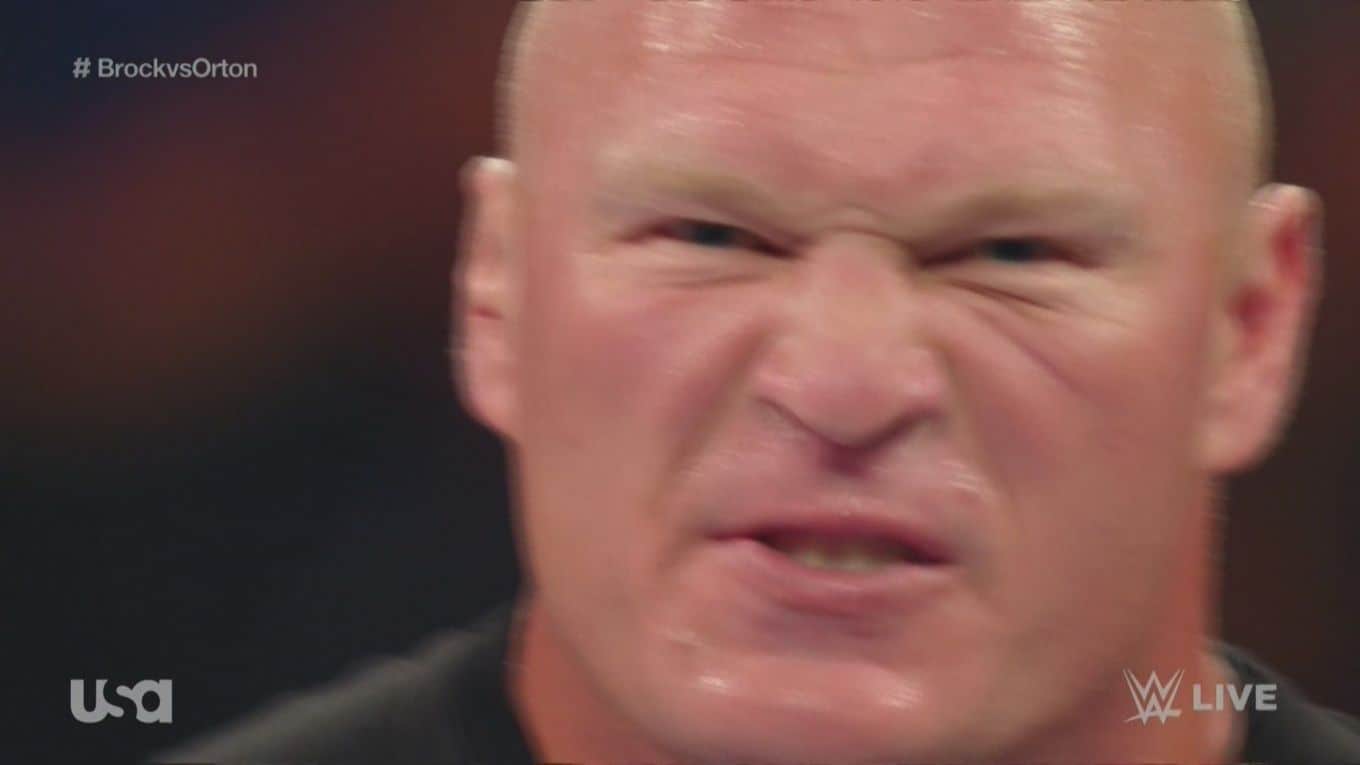 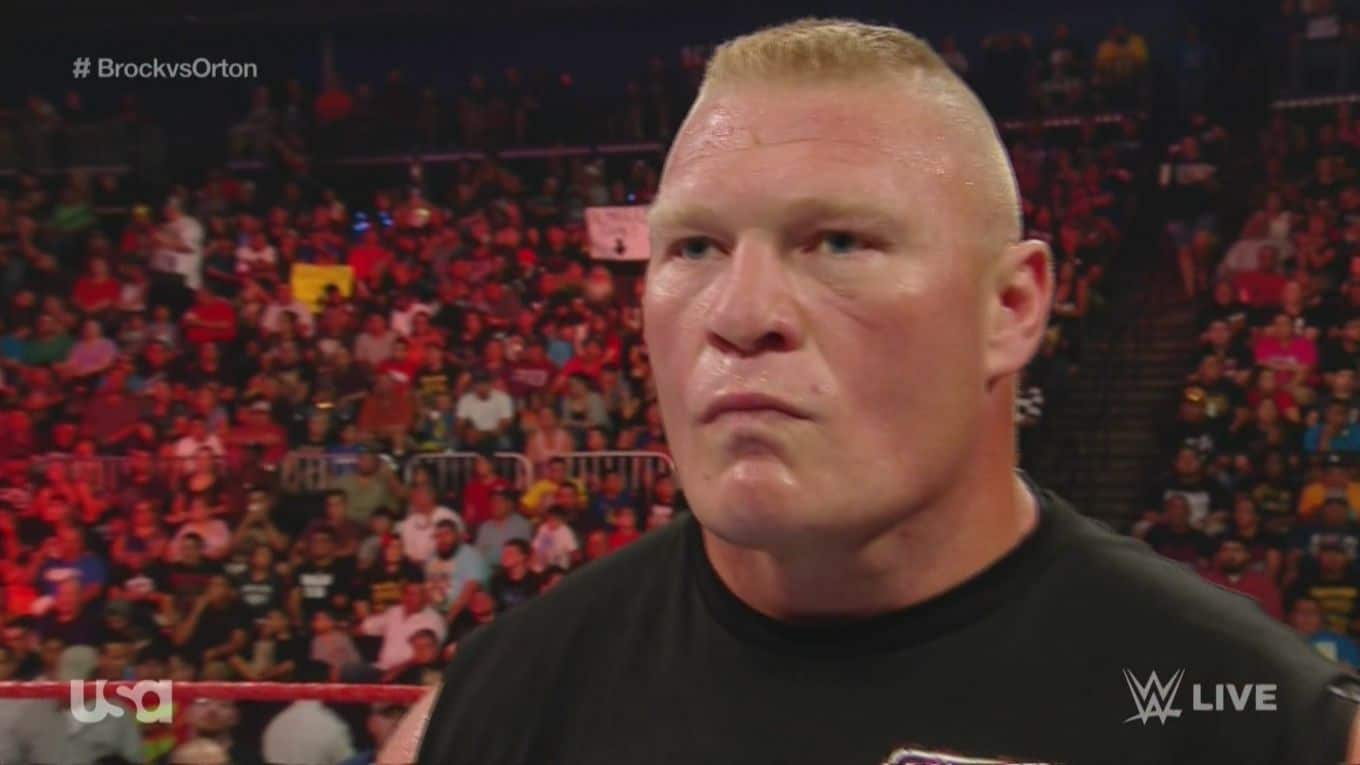 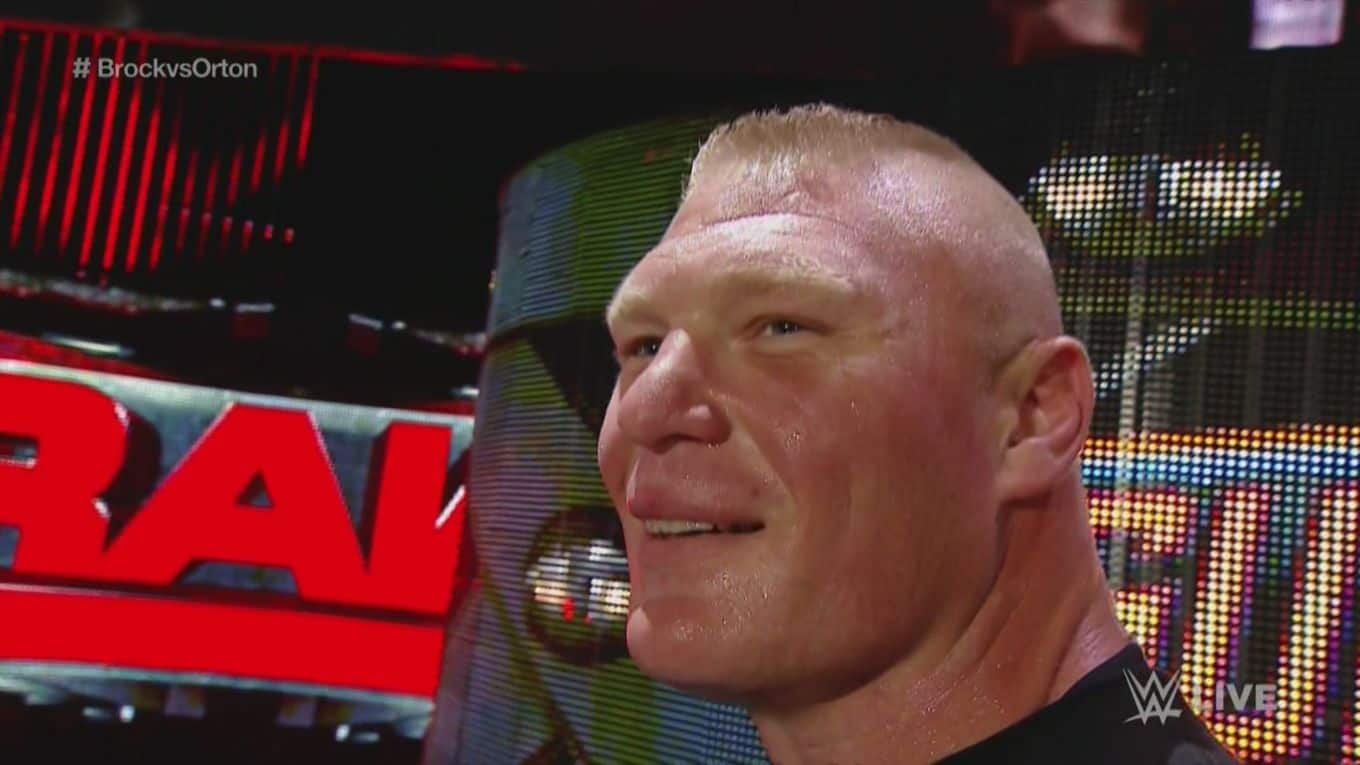 Enzo and Cass are out so Owens can face KO. Cass dominates in the corner with punches before Owens slides to the floor. KO posts him and we go to an ad break. Cass flew for this shot too – very impressive for a guy his size. After the break, Jericho jumps Cass for the DQ. Tom chats to Roman, who says he will represent his bloodline and whoop Rusev’s ass. Rusev jumps him, tosses him into a steel door, charges at him, and then tosses him onto a pair of tables. Summerslam Week is recapped, including a WWE 24 documentary on the Women’s Revolution, a JBL Legends show with Sting, and the NXT Takeover event. 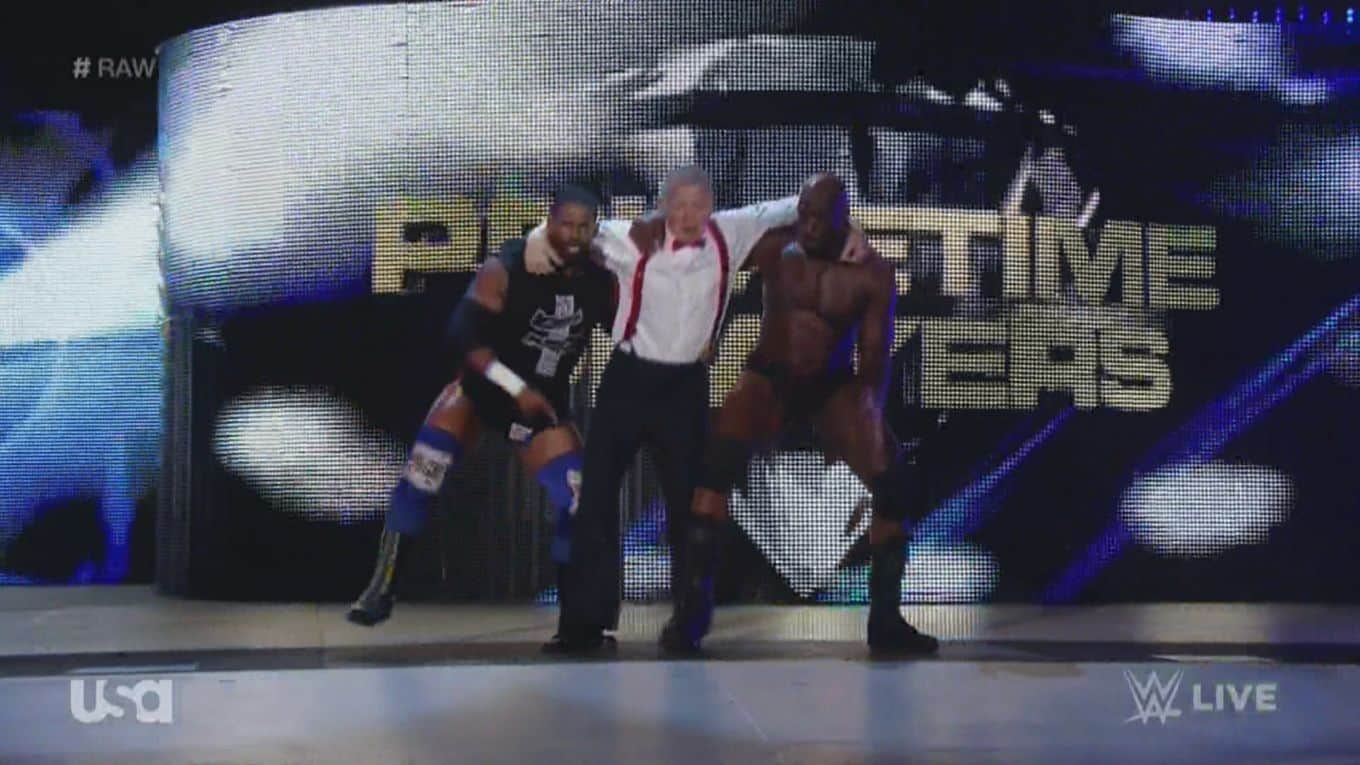 PTPs are back…again…for reasons…because they split up…also for reasons. Backlund dancing with them amuses me. They provide some context for this with Titus wanting to reunite the PTPs and Backlund is fine with this for reasons that aren’t clear. Well whatever, they’re far better as a team than as singles acts. They’re facing the Shining Stars here. Epico chants about Puerto Rico while Primo chokes Titus. Titus recovers, splashes him and D-Young gets gordbustered into Primo for 2. Young is distracted briefly by Titus, but doesn’t fall to a schoolboy cradle. Instead, Titus hits the Clash of the Titus and the heels win.

Jinder Mahal comes out to face Neville. Neville gets 2 off a quick cradle while Corey talks about how Jinder used his time off to better himself. Cole praises Neville’s ability to create offense by just saying that over and over. Neville kicks him down, hits the Red Arrow and wins. Mick tells Stephanie that Jon Stewart will be their guest at Summeslam, and then Seth comes in and says he’s looking for Finn. Mick tells him to look in the ring and then tells someone to cue Seth’s theme. YES! One of WWE’s best workers is here to talk a bunch! 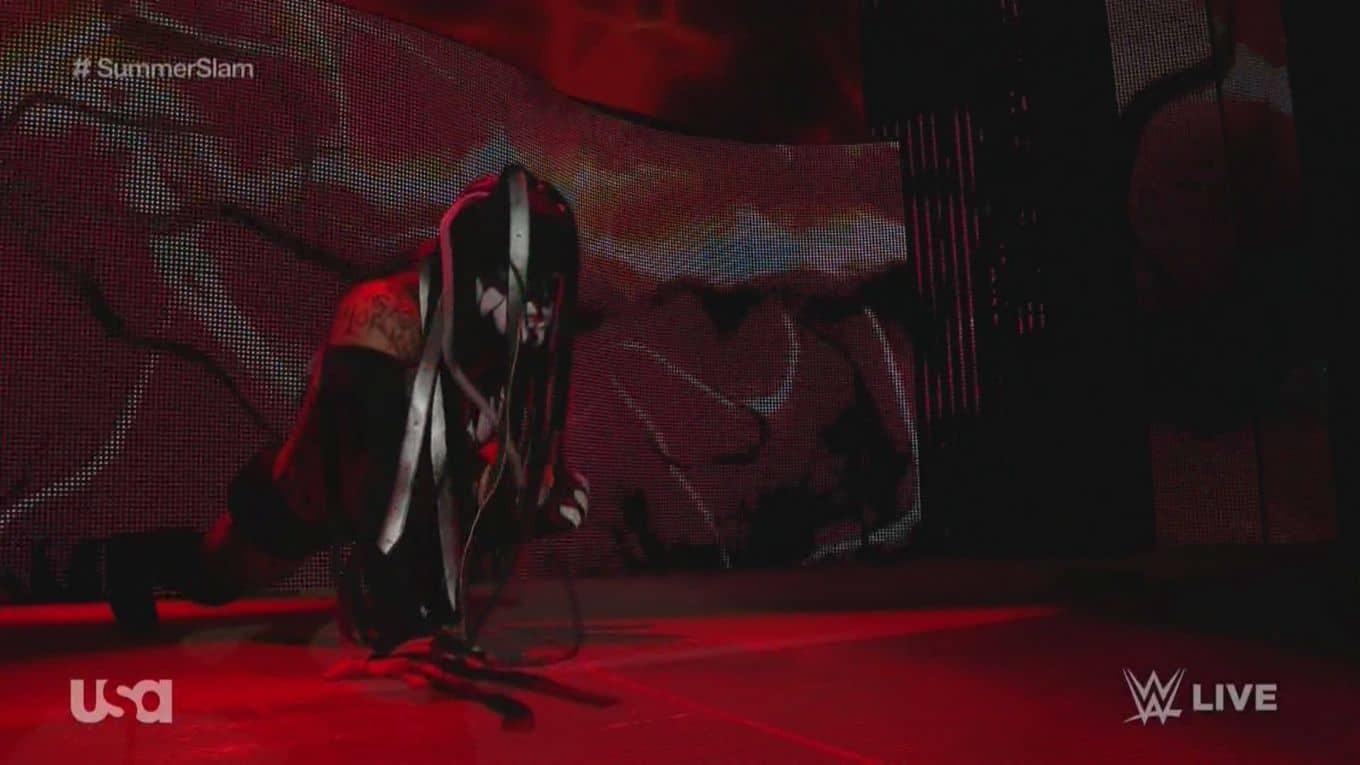 He says that there is no Demon King and Finn is just afraid of him – and if he wasn’t Seth Rollins, he’d be afraid of himself too. Seth is briefly put into a trance before chanting and lights flicker. The black and red paint demon getup is used for Balor, who has now added text across his body. The body paint and lighting are great. All the interpretive dance stuff though…not so much. This gets a holy shit and this is awesome chant before they brawl briefly and Balor hits a flip dive. Recap of the Roman-Rusev stuff. 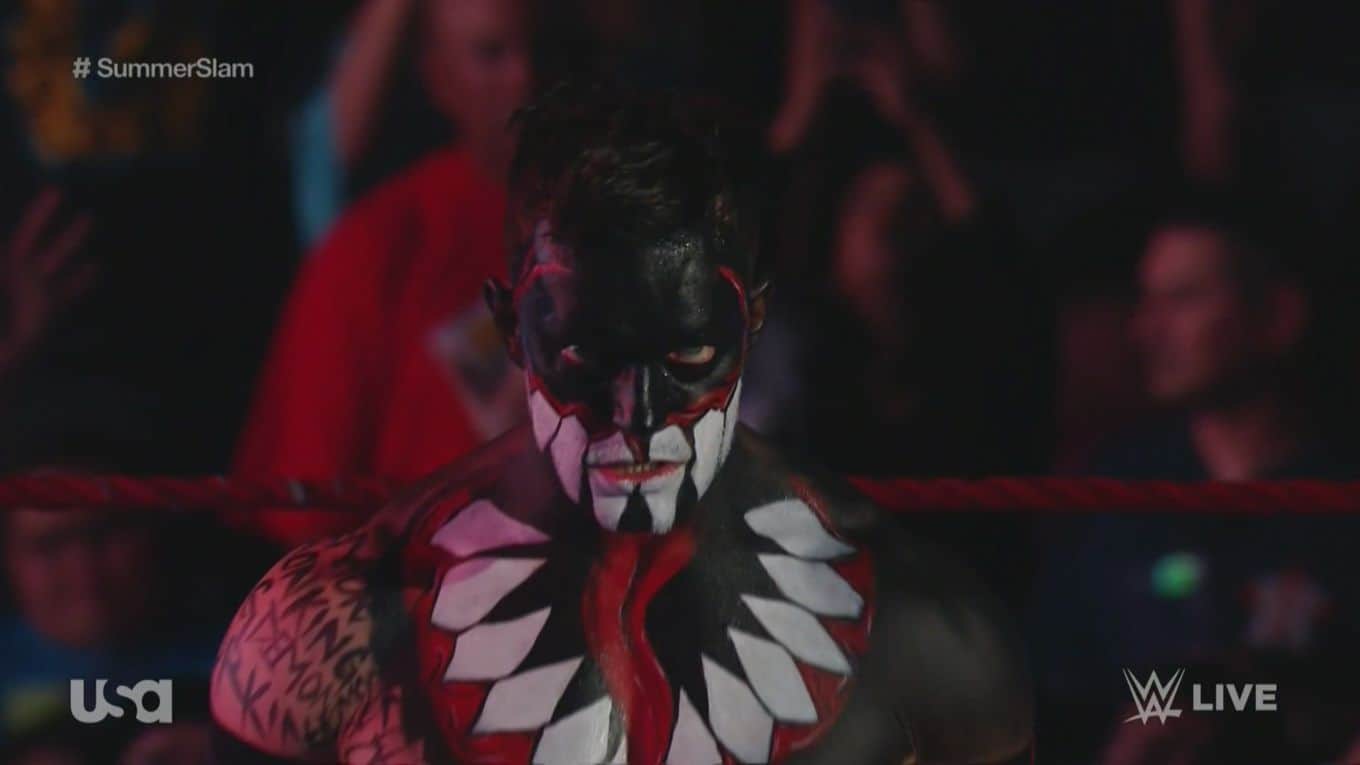 Golden Truth is out to face Doctors Gallows and Anderson, in white coats. Byron makes a reference to Mr. Wizard’s World. Truth eats a bunch of offense from Doc, but lands a calf kick. Goldust lands a pair of uppercuts to the Club before hitting a slick bulldog on Karl. Snap powerslam gets 2. Magic Killer beats Goldust before Kofi and Woods come down to brawl. New Day wins this, which doesn’t bode well for their tag title match. They go to hit Karl in the balls with the trombone, but Luke saves Karl. They plug the Network for a bit. Charlotte and Dana chat for a bit about how Dana watched Charlotte a lot on the Network and how Charlotte gave Dana a taste of stardom and how she’ll ask Stephanie to replace Dana with someone who isn’t an epic failure. Well, this helped no one. 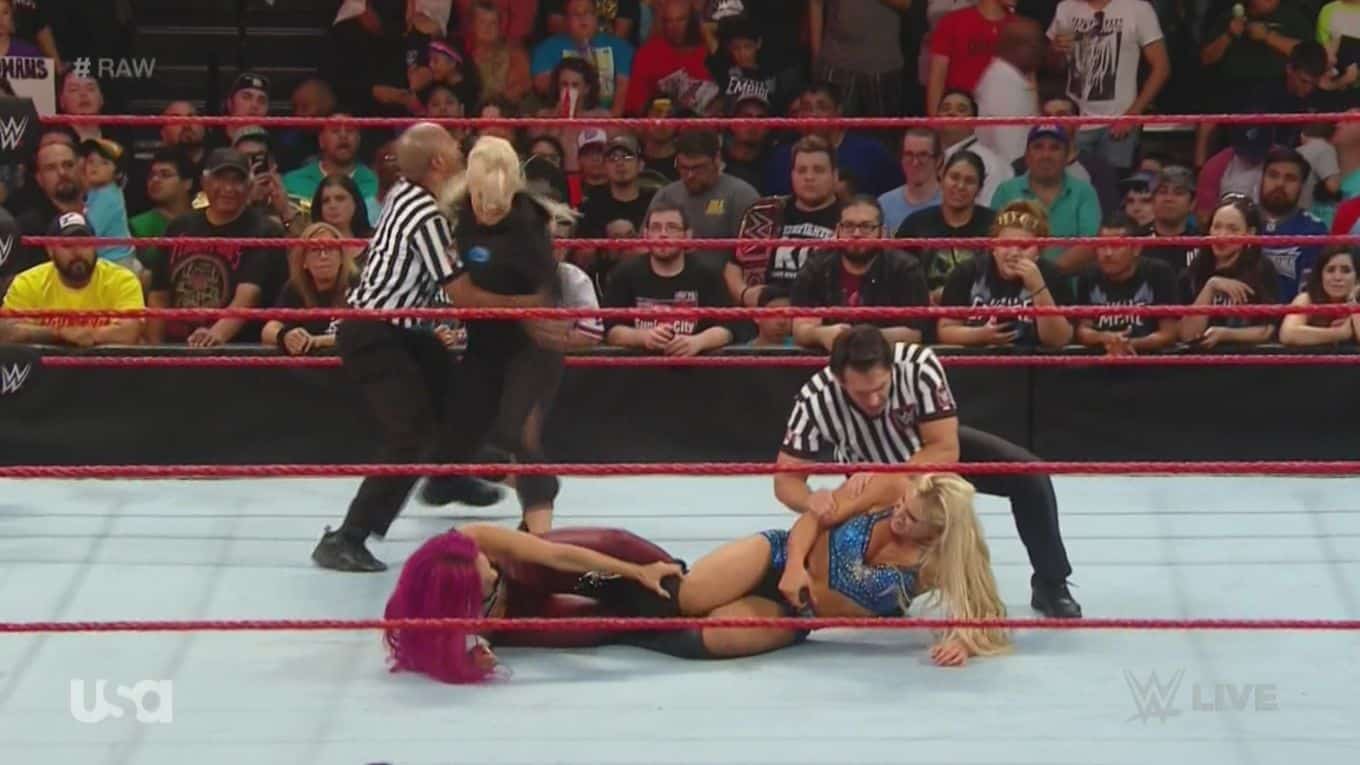 Sasha is doing commentary talking about being better than Charlotte from day one. Charlotte tosses Fox into the rope and stomps away. Natural Selection ends it. Sasha then insults Byron and brags about all the celebrities who will show up to see her win. Dana jumps Sasha so Charlotte can lock on the figure eight. Recap video of Braun Strowman destroying jobbers. Lana comes out to bring Rusev down and they brawl on the floor. Rusev forearms him in the corner, but eats a Samoan drop. Jumping lariat hits and Roman gets a fair mix of boos and cheers – more cheers than usual though. Rusev dominates on the floor for a break. Rusev tells the crowd to keep cheering for the Russian and Bulgarian. 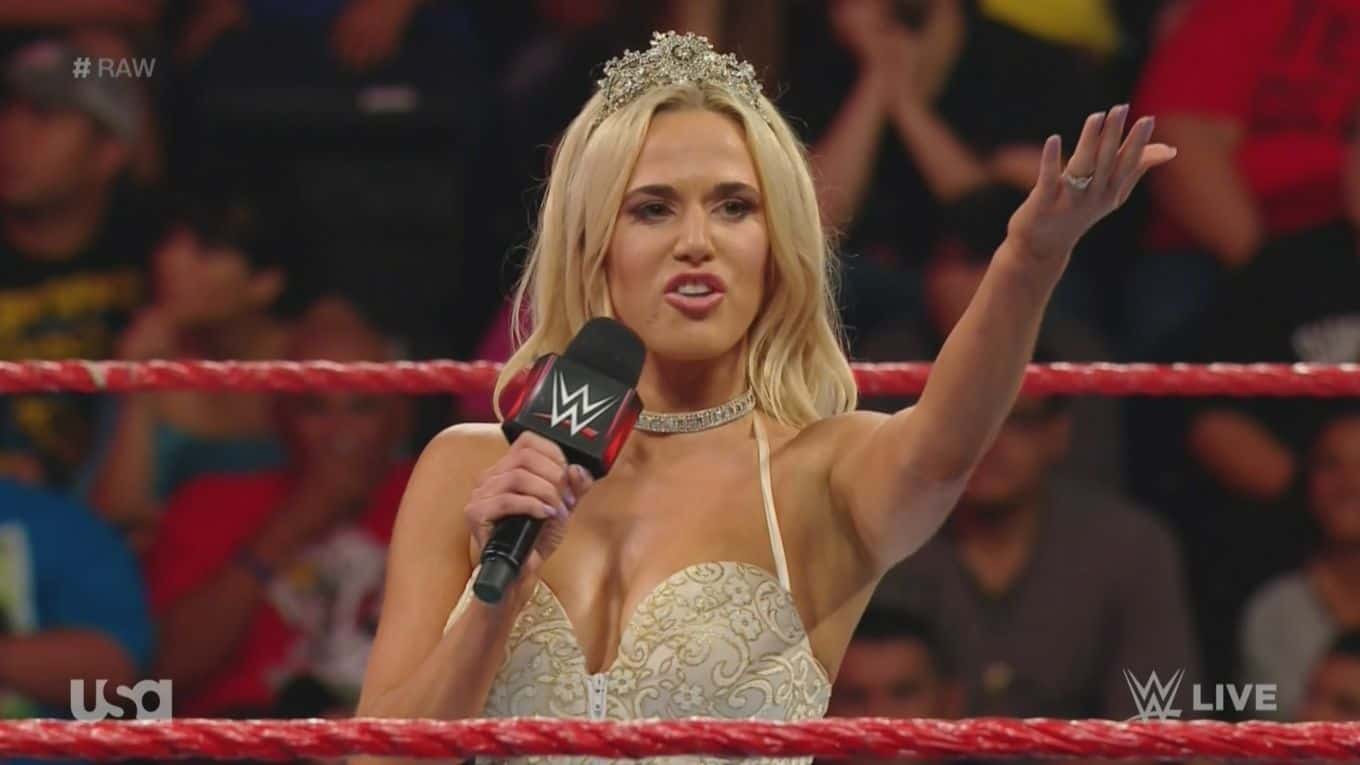 Rusev chokes Roman out with his own vest, which Corey compares to a gi choke. A “let’s go Rusev/USA” chant breaks out. Roman lands the corner lariats before hitting the protobomb for 2. Rusev grabs the arm off the Superman punch and lands a spinkick for 2. Second rope headbutt hits for 2. Rusev hits two more of them for a 2.5. Rusev is sent over the top with a lariat, but lands a kick to the gut. Superman punch hits Rusev for 2. Cro Cop high kick hits and gets 2 for Rusev. Rusev makes an amazing face of poor sadness before hitting the kick to the spine, but Roman fights out of the Accolade attempt. Superman punch leads to a knee clip and a kick to the neck and the Accolade is locked on with Roman seemingly helpless, but he gets to the rope! Roman spears him for the win – which bodes well for Rusev’s title reign. 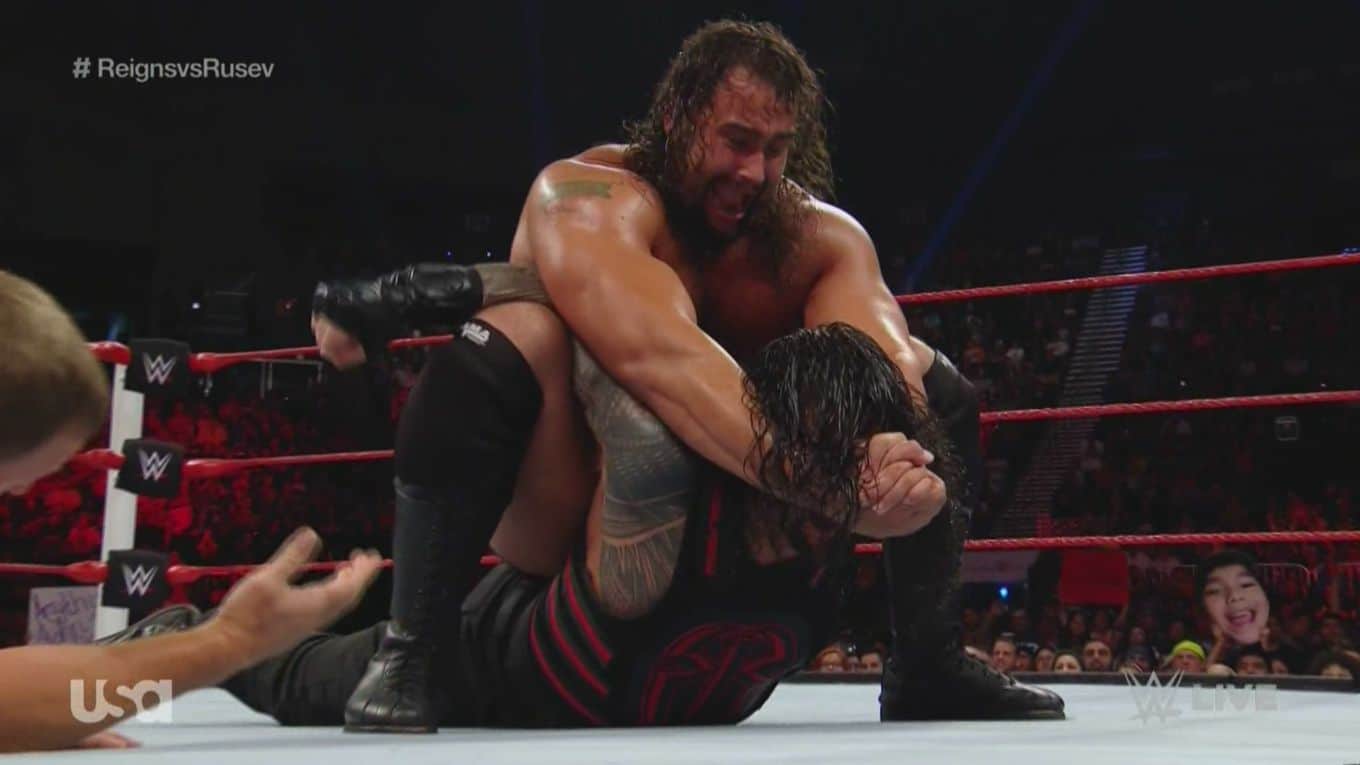 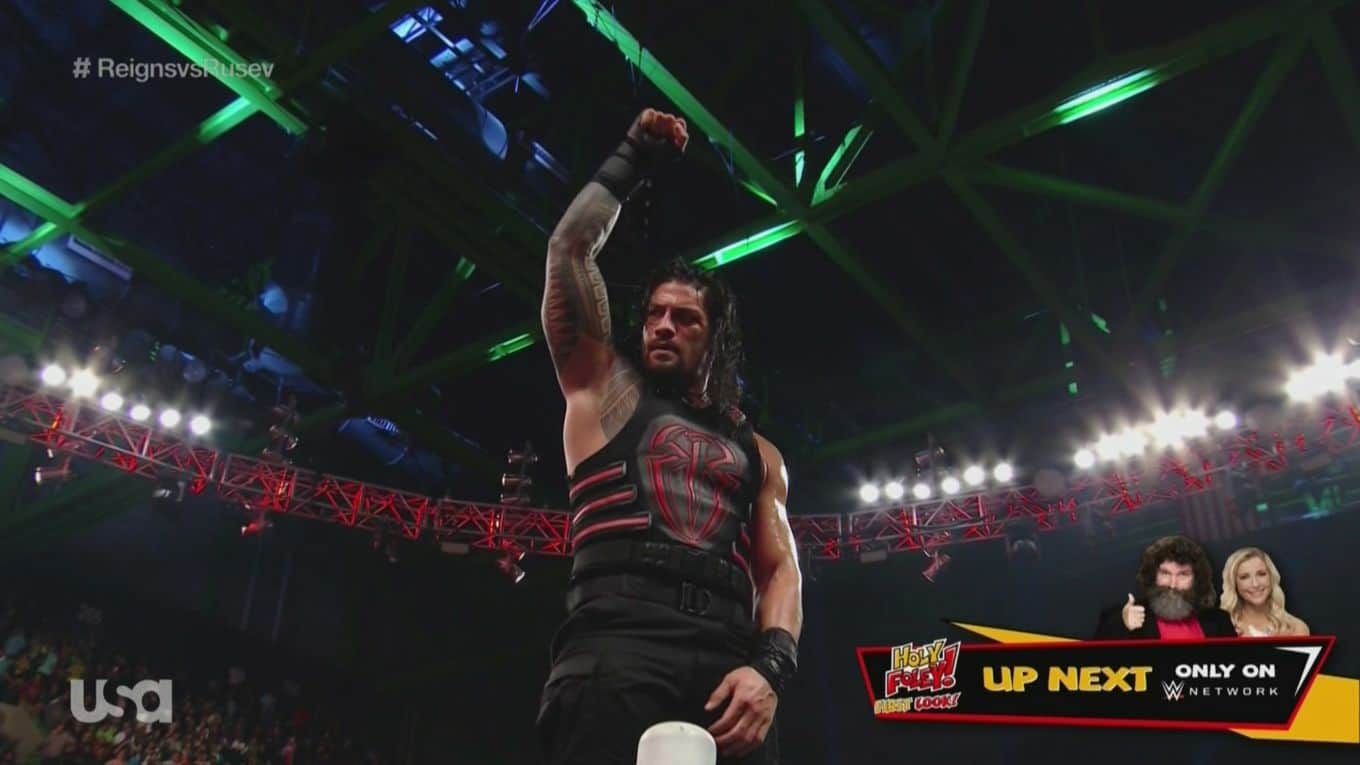