Round two of the cruiserweight classic heats up tonight, and we get a recap of the second round matches to date. The crowd shot shows a Pentagon Jr. shirt for perhaps the first time yet on WWE TV. Mauro puts over Cedric’s match. Jack Gallagher’s match against Akira Tozawa is up first, and he puts over how he uses strategy to win. Tozawa puts over how fan reactions inspire him and how he will never give up. Tozawa is out first, followed by Gallagher.

A “Jacky boy” chant breaks out for Gallagher, who gets taken down quickly by Tozawa. Gallagher escapes an armbar while Mauro talks about Gallagher’s training in the Snake Pit, and how he is 2-0 in amateur MMA. A modified Indian Deathlock is applied while Gallagher politely waves to him during it – ha! Gallagher escapes holds with gorgeous movements. He ties Tozawa up into a ball while Tozawa yells “HEY!” Gallagher takes advantage of the position to kick him in the butt. Tozawa lands forearms, but eats a big uppercut. Leg lariat gets 2 for Tozawa, as does a senton. 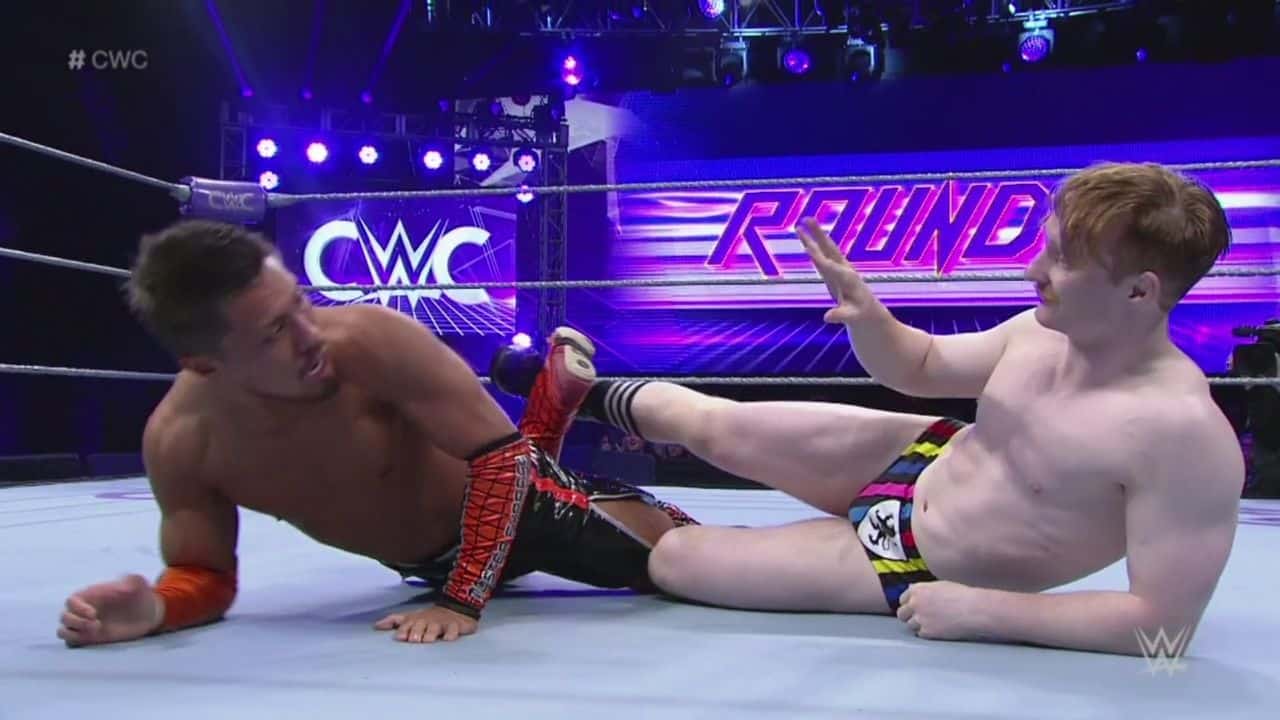 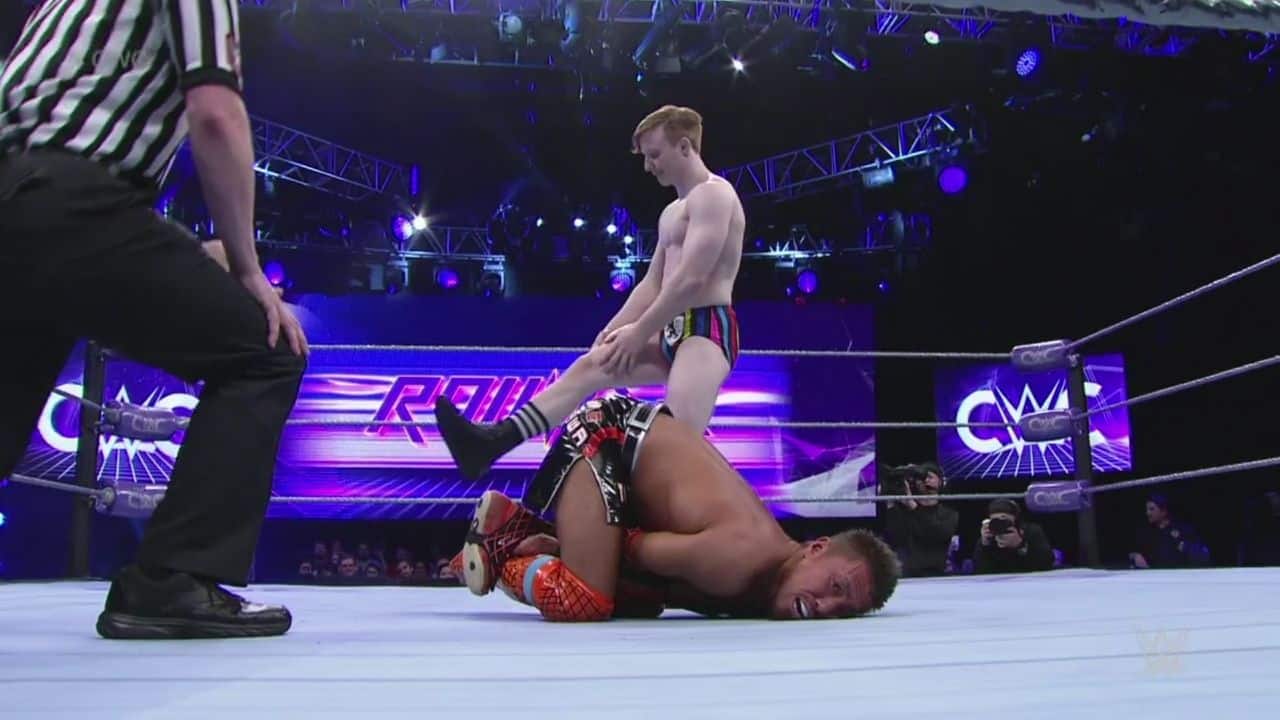 We get an outstanding exchange where Jack hits a big elbow, but Tozawa fakes out one of his own before just jabbing him and Jack falls liked a tree. Gallagher gets a victory roll monkey roll to regain a bit of control before working on the leg. He locks on a great many leg holds before doing a reverse dragon screw on the mat and teasing a surfboard, but slamming the knees into the mat instead. Compression lock on the knee, leads to Tozawa hitting forearms and finally landing a bicycle kick for 2. 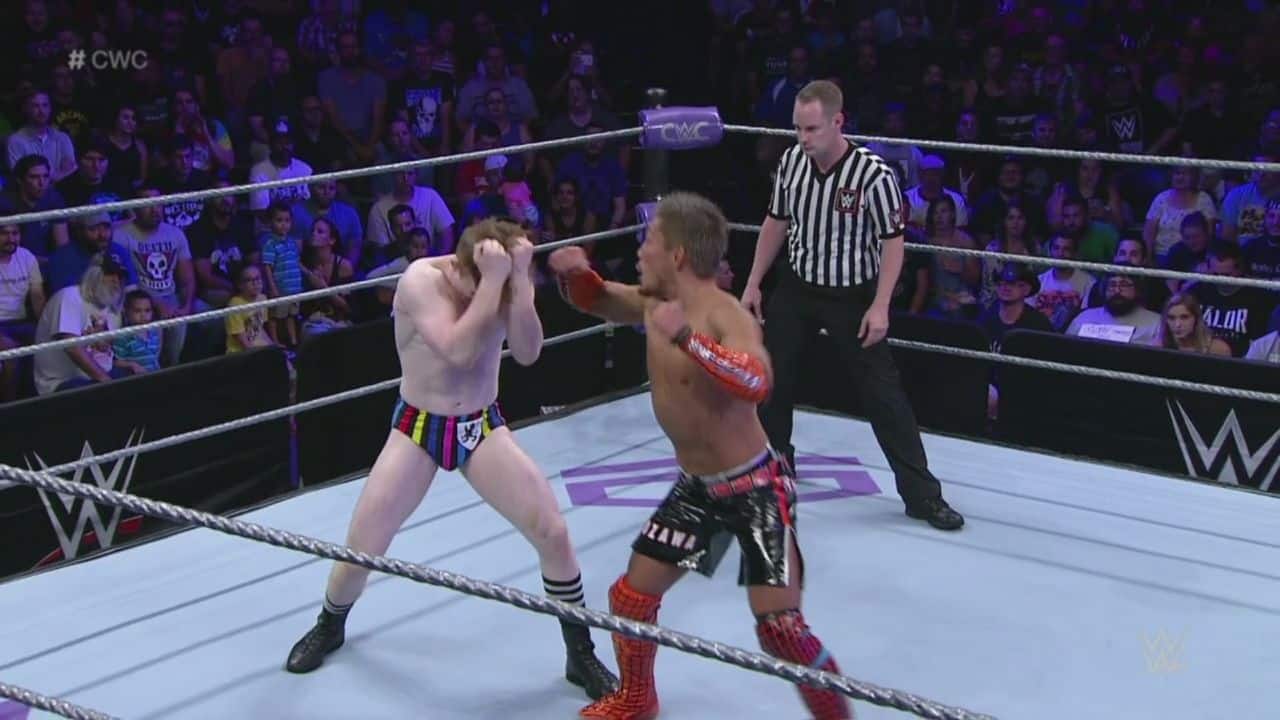 Gallagher locks on a heel hook and makes some amazing faces. Tozawa gets whipped, but falls down. Tozawa fakes him out, but eats a headbutt that gets 2. A cradle gets 2 for Tozawa, followed by a snap German and he goes for the deadlift German – but Gallagher grabs his hands under Tozawa’s leg. Tozawa powers him up and gets the win with the deadlift German! This ruled! Tony Nese vs. Brian Kendrick is the main event, but Noam Dar faces Ho Ho Lun next. 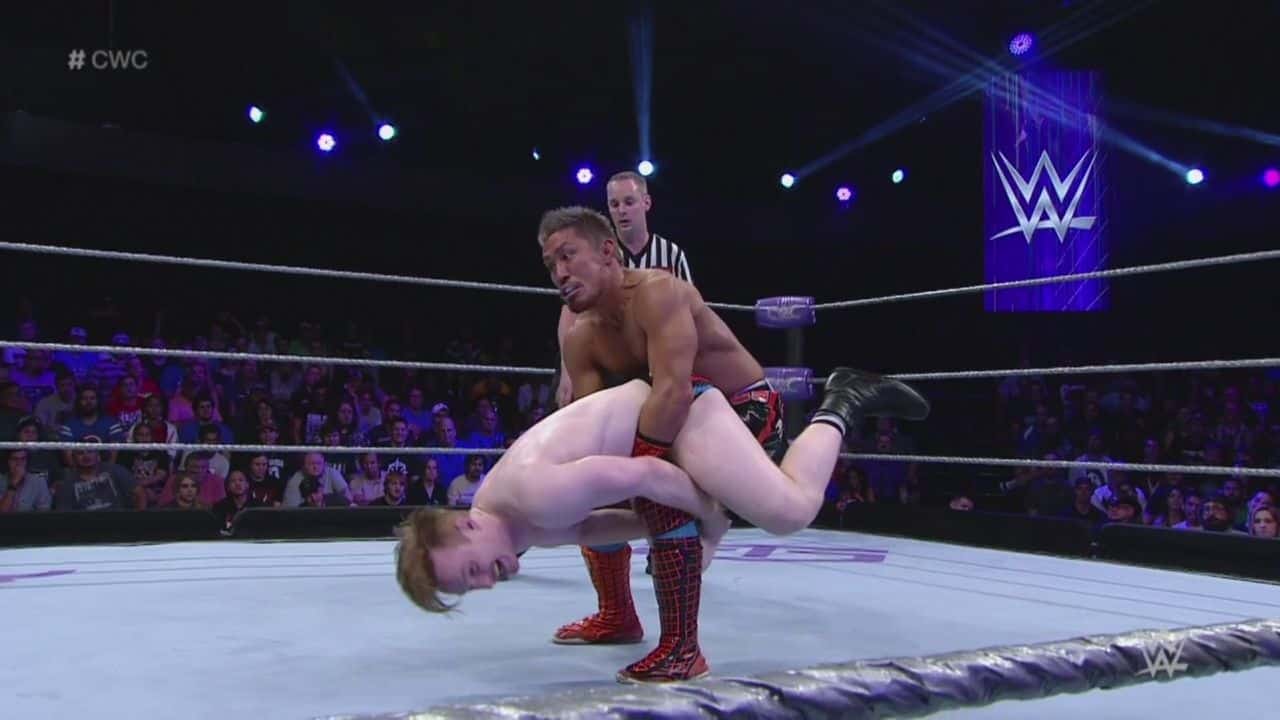 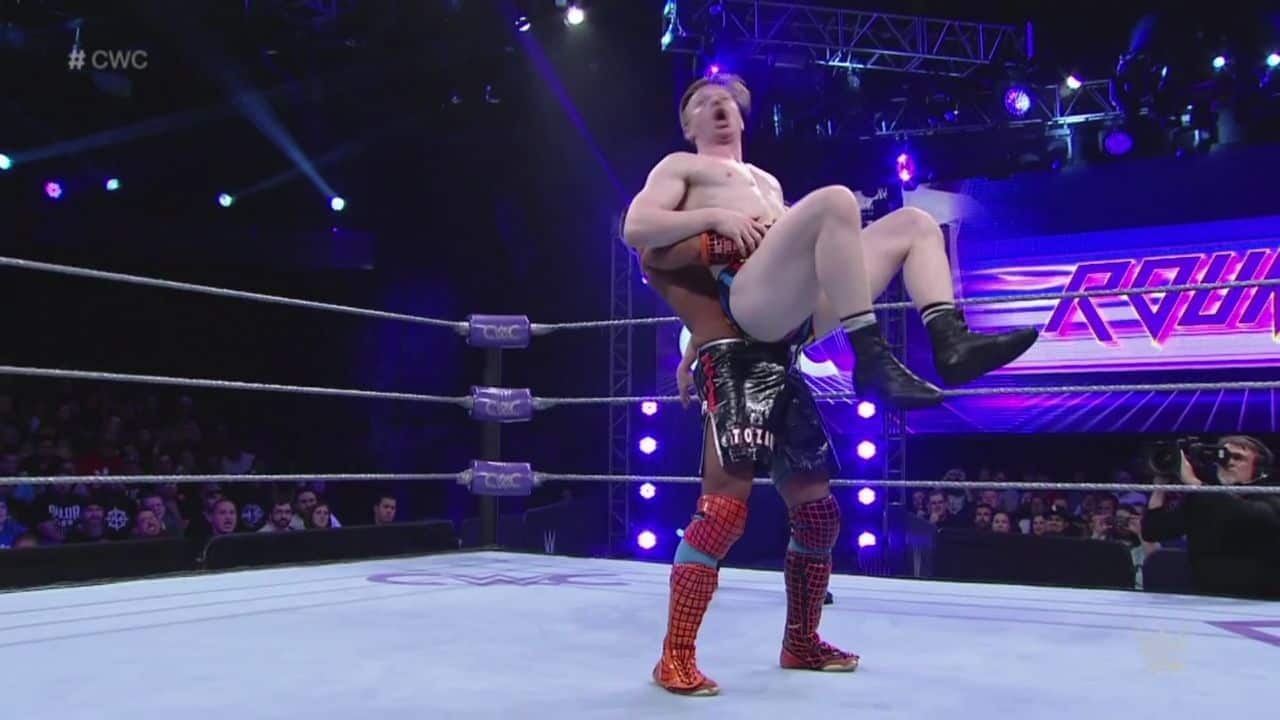 Each man’s first round is recapped. Dar is out first, followed by Lun. Lun lands a nice spinkick to start. Lun lands a snapmare and a sloppy dropkick for 2. Lun eats a basement dropkick and sells the knee for a bit. Dar gets 2 off a back suplex. Dar keeps things going with leg attacks before elbowing him in the head. Dar teases a dragon screw off the top, but Lun counters and hits a missile dropkick. Lun hits a Michinoku driver for 2. Lun goes for a fisherman suplex, but he can’t keep the bridge on the bad leg, and it only gets 2. The fans sing “Dar, Dar, Dar” to the tune of the Imperial March. Lun gets 2 off a kick. Dar locks on a kneebar and kicks Lun in the head at the same time to win – great finish for a fairly bland match. 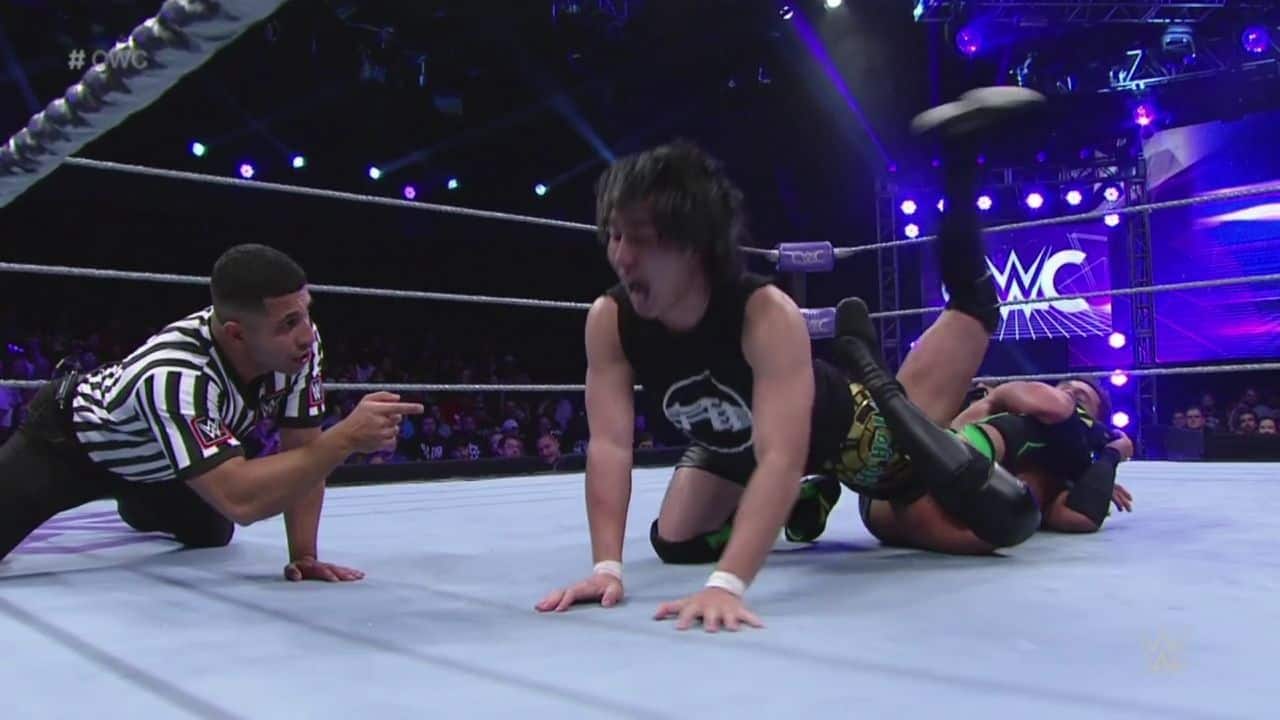 Kendrick puts over how he was young once – but he’s better and smarter now. He knows that he had better do something at 37, because if he doesn’t do well, he may not get another shot at 38. Kendrick has added a colorful flag to his getup now. Kendrick starts off fast and runs right into a knee strike! Nese slams him with a big elbow and jumping knee strike in the corner. Nese’s triangle moonsault is avoided and Kendrick goes to the floor. Nese chops him down, but Kendrick shoves him back only to eat a cartwheel on the apron and then a superkick on the floor. This all gets 2. Holy smokes!

Kendrick fishhooks him and lands a series of elbows. He traps Tony’s arm in the corner pad and kicks away. I love it – it reminds me of Finlay in 2006 using the ring skirt to his advantage, and that was outstanding. Matrix kip up by Nese leads to a superkick for 2. Brian pulls on the beard to land a series of elbows before using the ropes to damage Nese’s arm. He locks on a Jim Breaks armbar and uses finger manipulation to try to tap him out. Nese escapes and sweeps the leg on the apron. 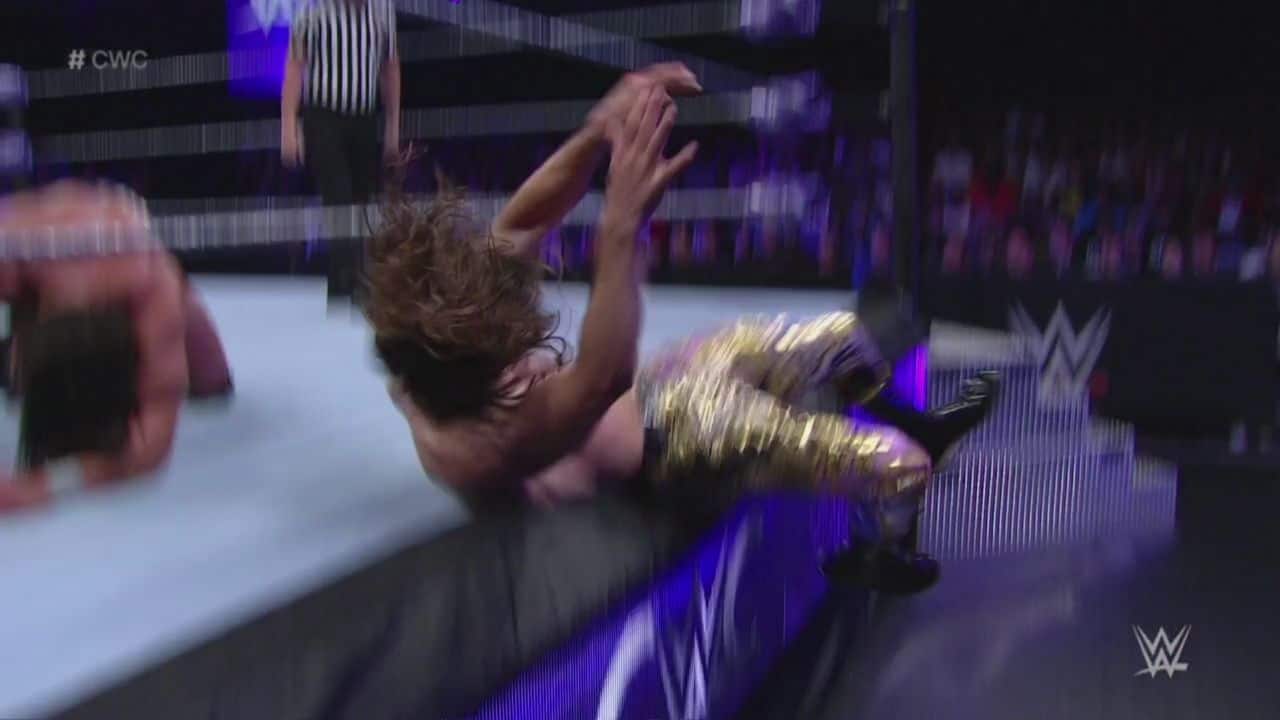 Nese hits a Fosbury flop to the floor! Nese lands a big elbow, a knee face buster, and a spin kick. Brian knees out of a suplex, but Nese holds him up for a falcon arrow that gets 2. Big lariat hits for Nese and gets 2.5. Nese goes up top, but gets pulled down for 2. Nese lands a deadlift buckle bomb for 2. Kendrick goes for the bully choke, but it gets avoided, but Kendrick locks it on again. Nese hoists him up for a pumphandle falcon arrow for 2.5! Superkick party by Kendrick leads to a calf kick taking Nese down. Kendrick goes up and eats an uppercut and a series of kicks. 450 misses and the bully choke wins! 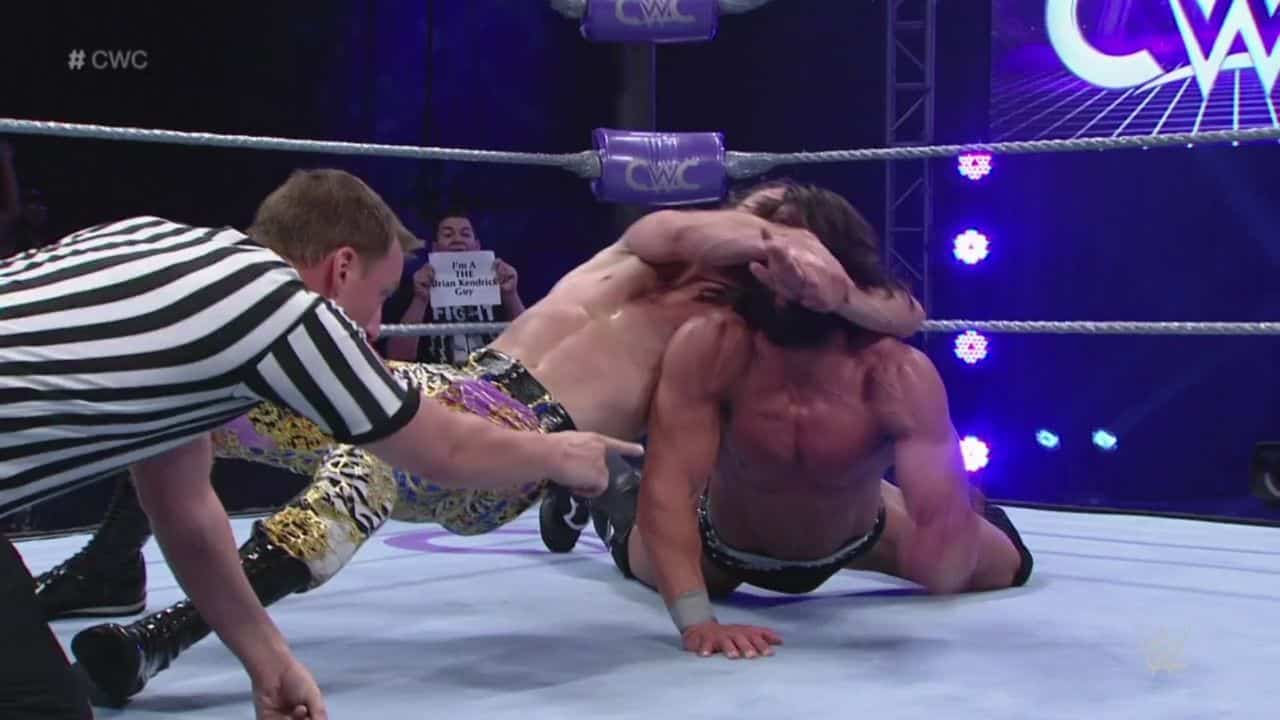