Over the weekend, on Friday, Finn Balor provided an update in his own words of his current status and return timeframe by video.

It looks like his return is on the maximum part of the horizon, “at least” 6 months. Hopefully, just in time for Wrestlemania 33 on April 2, 2017 as 6 month puts return, assuming no complications, in February/March 2017.

Then on Sunday, he provided a several tweet update covering Summerslam, his win of the WWE Universal Championship belt, his relinquishment of that strap, his pre and post surgery update. It was a more difficult and complicated injury than first expected.

What a rollercoaster week. I woke up the morning of Summerslam with nothing but positivity & feeling physically better than ever

The moment I got injured I knew it was serious, it was an instinctive reaction to pull on my wrist, I entered survival mode

When the bell rang, I had won, I was the Champion, but I was reluctant to celebrate as I already knew in my heart what awaited at Raw

Disappointed yes, but I was CHAMPION and I was not missing an opportunity to fulfill my duty and appear on @GMA Monday morning

After hours of scans & despite some hope, the worst was confirmed at 5pm Monday. I would need surgery ASAP & relinquish the title on Raw

Despite every emotion I had felt the previous 24 hours… I was still the CHAMPION. That gave me strength. Now I was not….

Tuesday at 3am I traveled to Birmingham Alabama. Dr.Dugas prepped me for surgery as a photo of Seth Rollins watched over us

What was supposed to be a 1hr surgery turned into 4hr, as once I was opened up ,the Dr found a lot more to the injury the the scans showed

Wednesday morning at 5am I awake after the surgery groggy and sore. The gravity of the situation began to set in. Rehab will start at 9am

Thursday 5am fly back to Orlando, check-in with Performance Center medical staff & we begin planning The Comeback 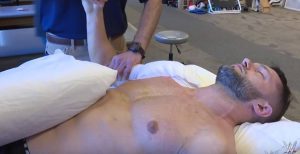