A Mr. Fuji memorial graphic airs, and we get a recap of Finn’s title win and vacating the next night leading to the tournament and tonight’s fatal four way. Cole throws to Corey mid-ring, who is with everyone in the 4-way for a verbal debate. Seth gives Owens his mic time and he uses it to be a sarcastic asshole in a glorious way. “Hi, my name is Kevin and I WANNA BE UNIVERSAL CHAMPION!” The crowd is going crazy for Owens, so while the timing may not be perfect for him going into tonight, this feels like the right place to crown him as champion. “Cass, you’re just really tall and you think that counts for something!?” “Yeah, it does!” Owens is amazing here. Roman gets boo’d a lot and beats up Owens before staring down Cass. Heyman will talk about Brock later. Jericho vs. Neville is next. 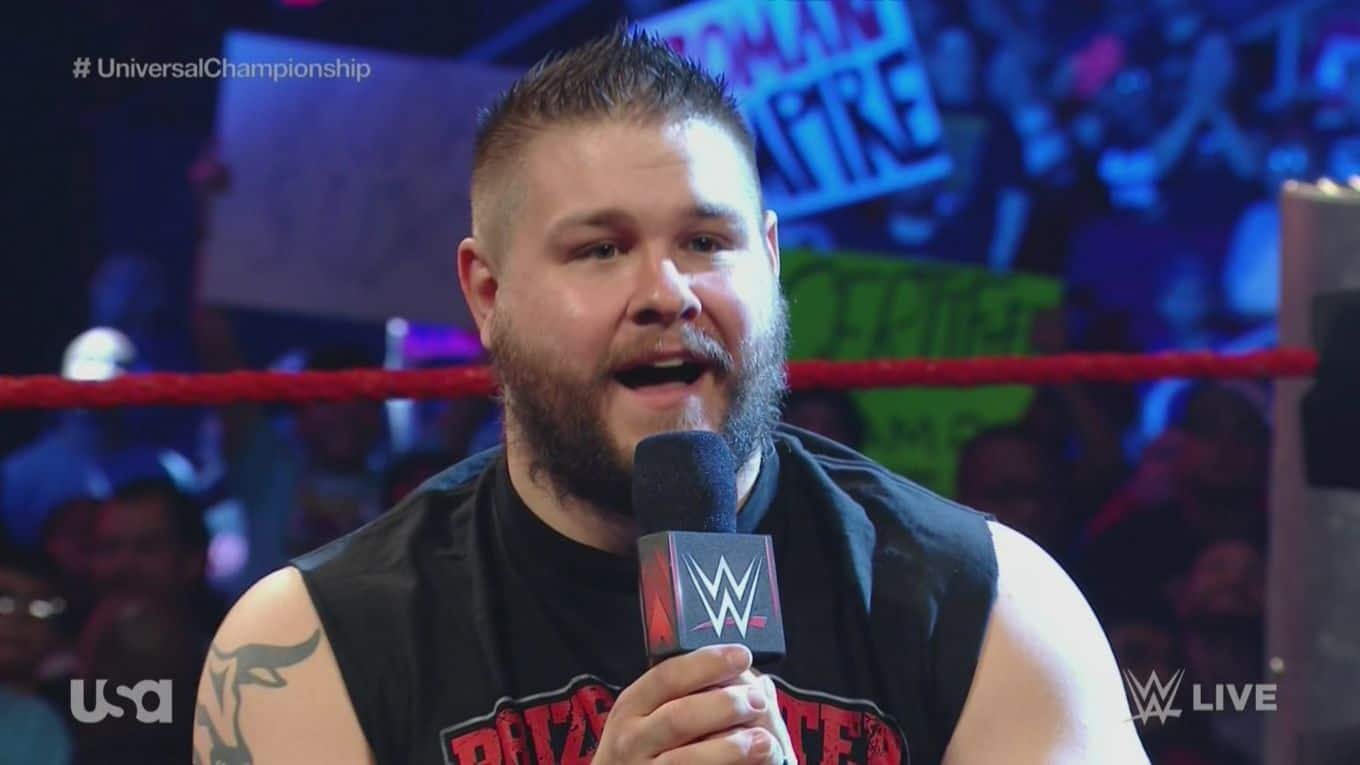 Neville comes out and we get a backstage interview with Jericho talking to “Phillipe” about the muscled-up Mighty Mouse before he sings the Mighty Mouse theme and saying he’s going to get…the gift and Jericho, and not “it” because that would make no sense. This was amusing. Jericho hiding behind the referee to avoid taking damage is great too. Jericho gets a brief lead before an ad break. After the break, Jericho gets 2 off a flying back elbow. Neville sends him to the floor and hits an Asai moonsault, but Jericho avoids a Red Arrow. Neville avoids the walls and a codebreaker and lands a superkick. Red Arrow is avoided, and Jericho locks on a Liontamer to win. Bayley hugs people backstage and meets New Day, who sing the “Hey, hey we want some Bayley!” song. Dana comes in dressed in all-denim and mocks them, so Bayley mocks her and then New Day carries her out. Well, this was all rather random.

Nia Jax comes down to face Hyane, who says that she is from Houston and everything is bigger in Texas. Nia destroys her with her a variety of throws and shoulder charges before hitting the corner avalanche and hitting the awkward Samoan drop/World’s Strongest Slam. Nia’s finisher looks like some wonky thing made in a create a finisher mode. Anderson and Gallows say that run a retirement home – OLD FART and bury the Dudleys. They introduce Dana Brooke as their nurse, and she snaps a rubber glove. So this was a thing. A very bad thing that seemed like the first scene in This Absolutely Isn’t Monday Night Raw: The XXX Parody. 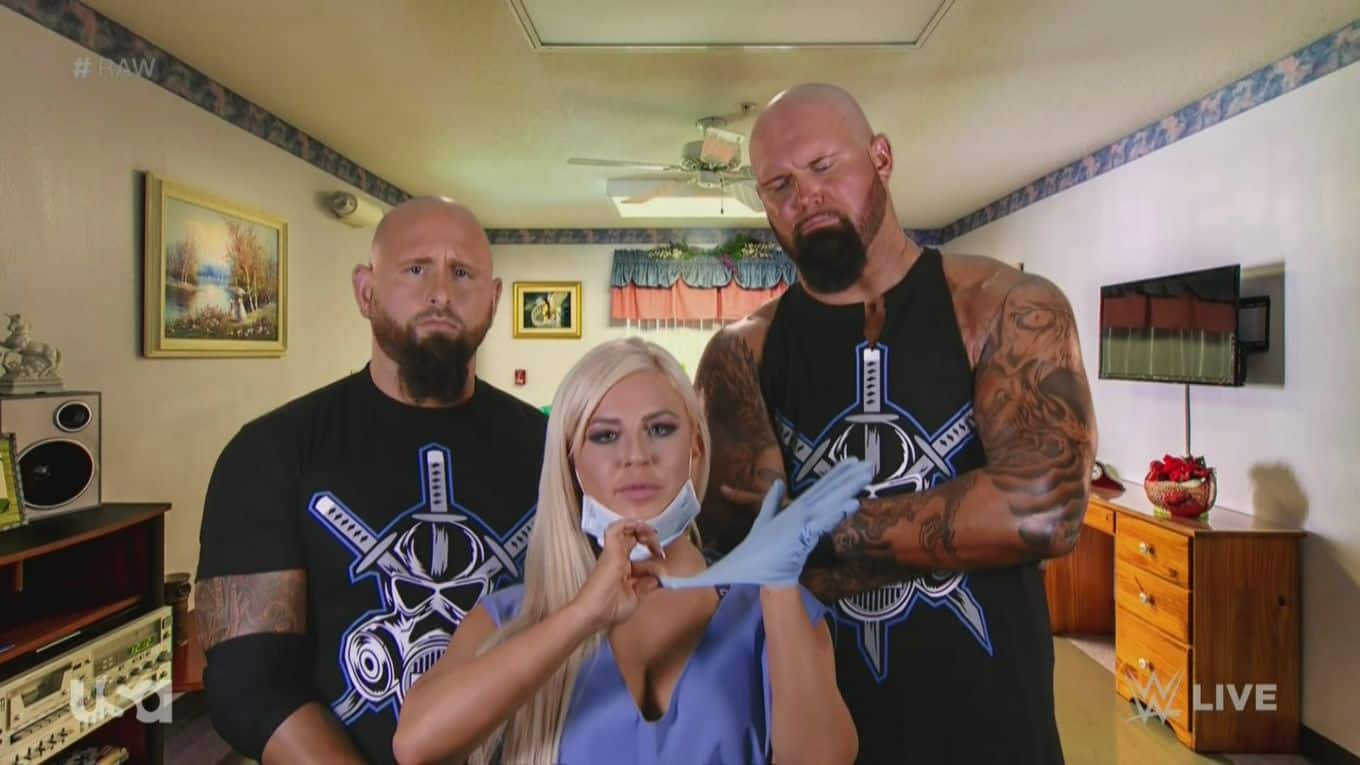 A Seth Rollins hype video airs showing him beating Sami to get into the four way. Jinder is mid-ring to face Sami Zayn. They talk about Sami’s ankle being worked on, and that’s the focus here. Jinder dominating Sami just seems odd. Sami recovers and wins with the Helluva kick. It’s 8:50 and the show is already dragging with filler content like this that just feels meaningless. Sasha Banks medical update is coming up, and it’s just Lita interviewing her on the pre-show via satellite. She’s determined, and Charlotte can bank on her being the boss. The New Day and The Booty vs. The Club and The Implants is up. 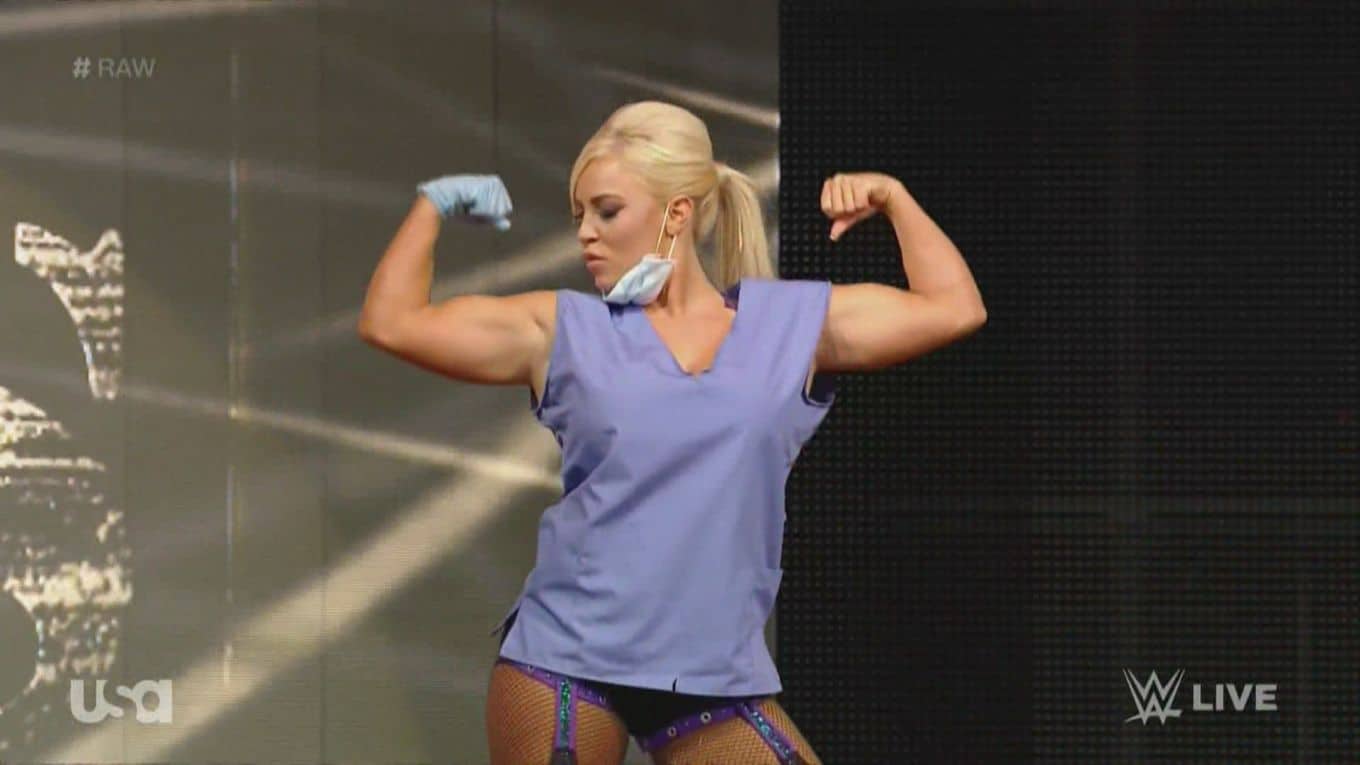 Bayley puts on the unicorn headband and they come out to her theme. The Club comes out with Nurse Dana still in her top and she too sweets them with the glove on, looking a bit like a stripper with a nurse’s outfit on. Dana and Bayley exchange turnbuckle shots before Karl comes in and eats suplexes from Big E. Kofi tags in and hits a series of dropkicks and a jumping lariat. Unicorn Stampede leads to Bayley joining in with a basement dropkick and then dancing with the team for an ad break. Pro wrestling in 2016 is weird.

After the break, we go to THE ANNOUNCERS in the foreground with their backs to the ring while the actual match, the thing that should matter, is in the background far in the distance. Karl spinebusters Kofi and Luke dominates him in the corner. Luke lariats E and prevents Kofi from tagging in. Kofi tags in Bayley, while Dana comes in and eats corner charges, the spinning elbow in the corner, and the flying elbow out of the corner, but she gets pulled out of the ring during a cover. Dana schoolgirls her for 2, but eats a Bayley to Belly for the win. This went on way too long. 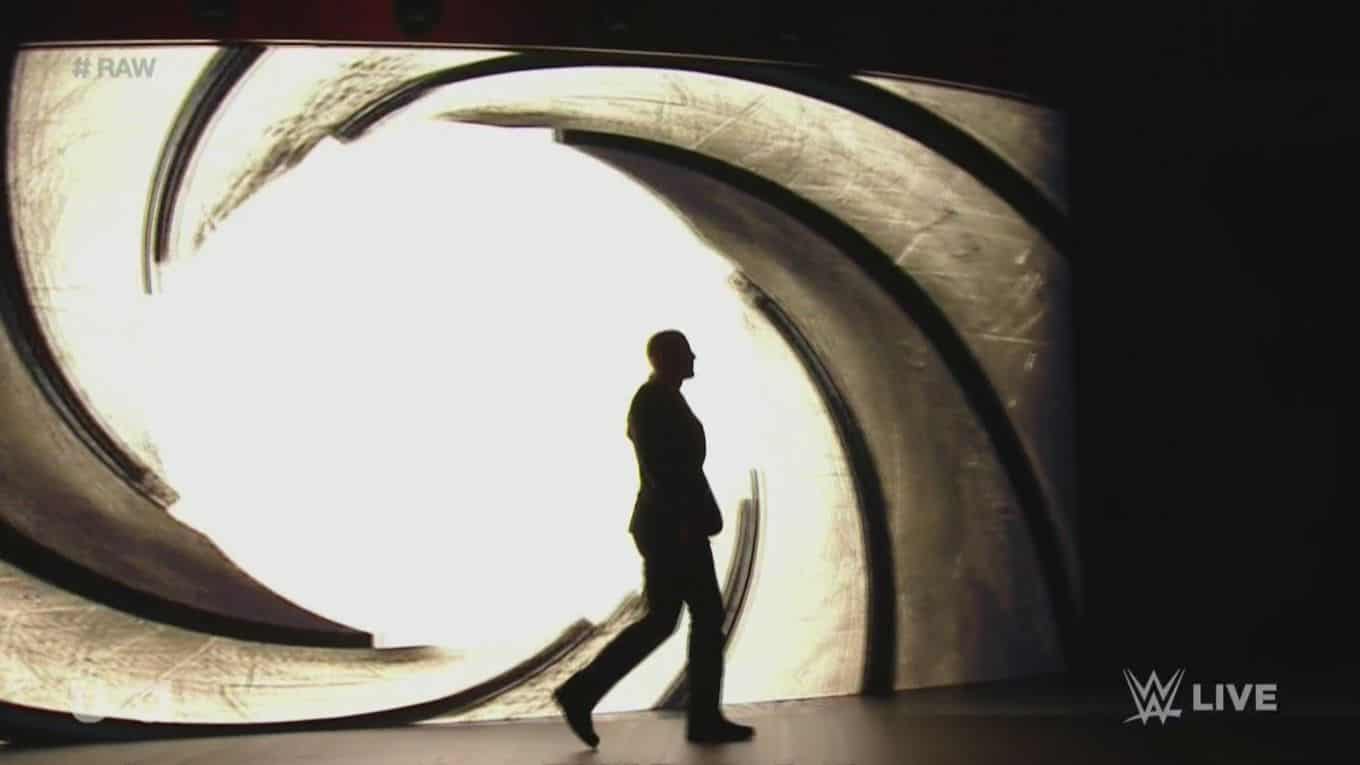 Backstage, Cesaro talks to Tom about the winner of the series getting a title shot and any day in WWE being a good day and a day where he can beat up Sheamus is a great day. He is speaking way too quickly and can’t even take a breathe with this kind of pace. The Miz and Bryan promo is shown and the show itself is hyped up with a confrontation between them. This is all going to be weird if it doesn’t lead to Bryan facing Miz. We get a Big Cass hype video about how he dreamed about being in WWE since he was a kid.

Sheamus vs. Cesaro is up and Sheamus tells Byron that Cesaro is desperate, not handsome, and that all of his sacrifices to become WWE Champion will mean nothing when the series ends and proves that he is the better man. Solid promo there. Cesaro takes him down and injures the elbow, leading to Sheamus complaining about the arm and Cesaro continuing to attack it for an ad break while the announcers defend this heelish action.

Cesaro lands a kneeling uppercut and eats an Irish Curse for 2. Corkscrew uppercut hits for Cesaro, then the chain of uppercuts in the corner, then the uppercut train and the Okada dropkick. Sheamus takes him to the floor and backdrops him into the post. Sheamus taps him with the cloverleaf while the announcers get on Sheamus’s case for going after the back after injuring it – despite them being fine with that earlier when Cesaro did that to Sheamus’s arm. 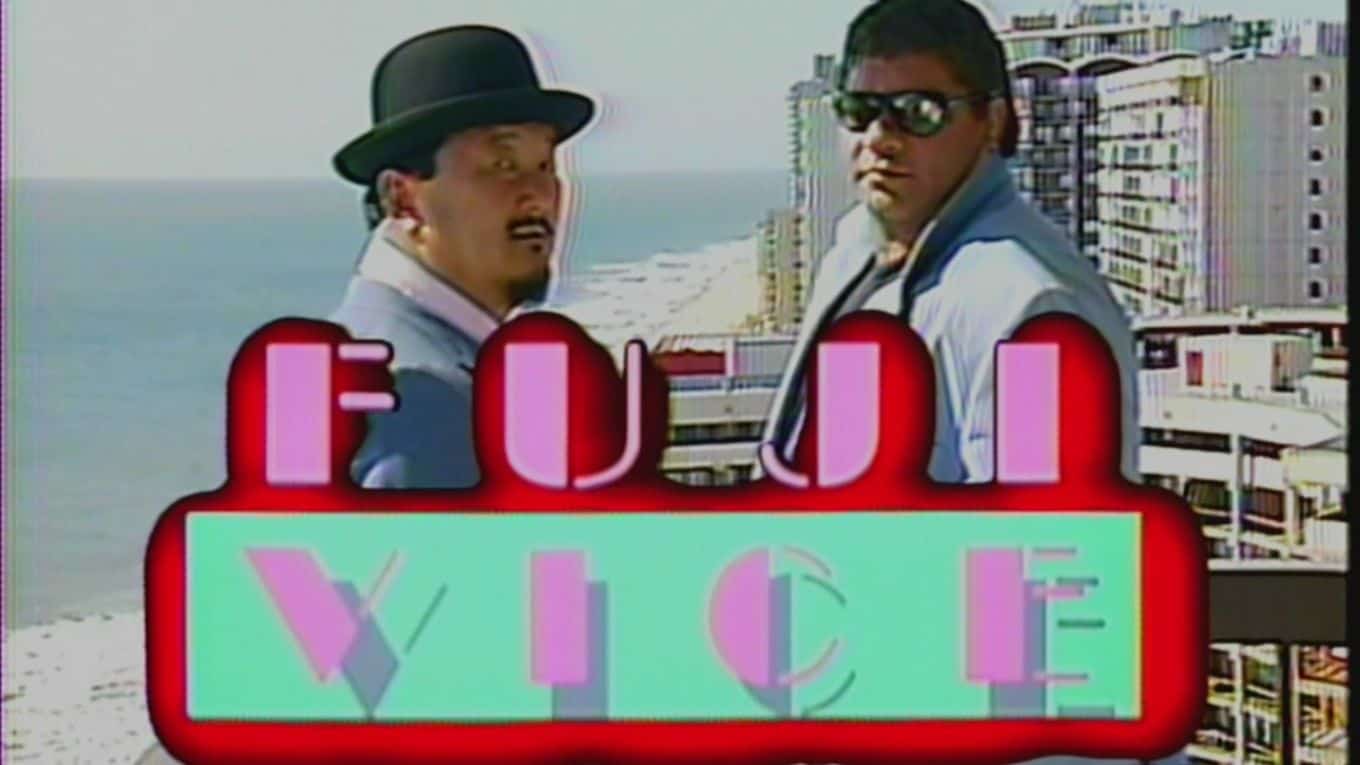 Mr. Fuji’s passing is talked about by the commentators as he is called a “trailblazer” – one of WWE’s favorite phrases to say when they have nothing to actually say about someone. The Fuiji/Muraco skits are called some of the most unforgettable parodies in entertainment history, which is a pretty tall tale even for wrestling. The Owens hype video talks about how he is in WWE because he needs to be here and saying that he always does what he needs to in order to get ahead.

Byron interviews Americo, the jobber facing Braun – who is speechless. Cole brings up Max Moon, which they might as well as used as a name for him. Braun tosses him around and wins with a flapjack. Braun unmasks Americo, which they play up as disrespectful. This came off as completely tone-deaf with them just turning a mask tear into a punchline. Steph walks backstage for the Paul Heyman segment next. Shockingly she isn’t wearing gloves before she cuts his balls off. 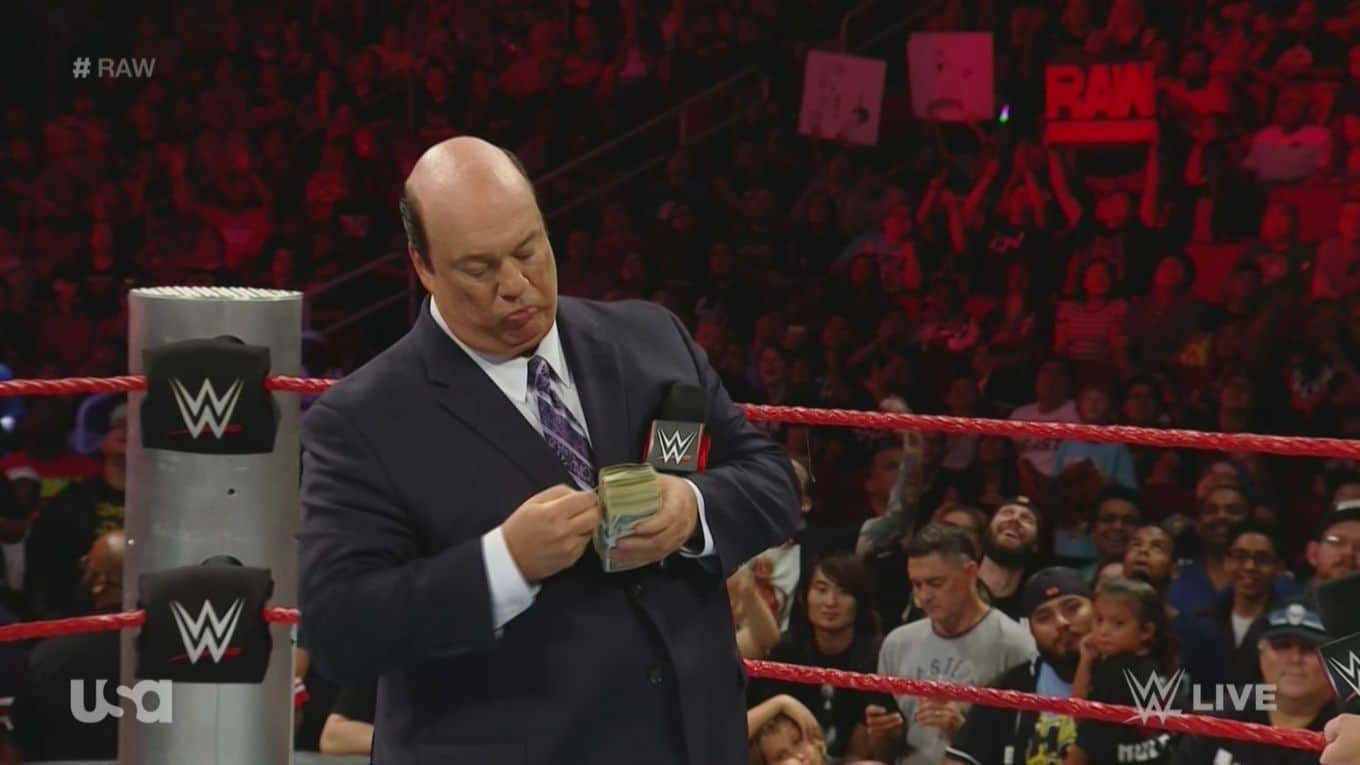 Cedric Alexander, Ciampa, and Gargano are hyped up for the cruiserweight division. Steph comes out and then gets interrupted by Heyman, who can barely get a word in edgewise before she buries him. An ECW chant breaks out and she says she bought that from Paul years ago. A CM Punk chant breaks out before Heyman talks about how he bent down to save Shane and he’s here to pay Brock’s $500 fine in all singles! Ha! Steph bats the money out of his hand and buries Paul for providing no value while Brock does all the work. Steph says a storm is coming “your ugly way”, which is just a horrible thing to say. Heyman says that an apology is eight days too late and the apology goes to Stephanie and goes on some weird rant about Stephanie being beholden to the board of directors. Heyman talks about the women empowerment movement, which infuriates Stephanie because it’s a WOMEN’S REVOLUTION DAMMIT. Heyman keeps rambling, she accepts the apology, and he makes some great faces. This was weird and largely bad, but captivating because of how awkward it was. 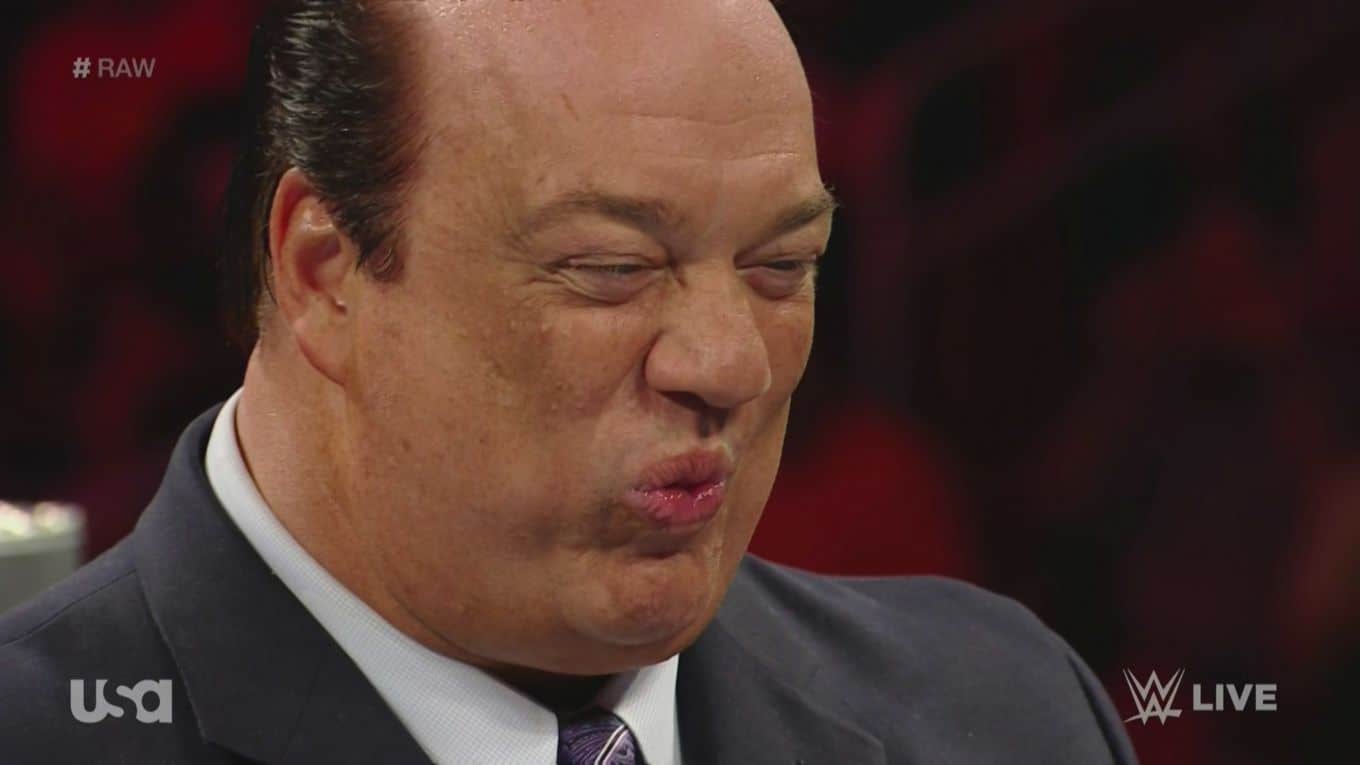 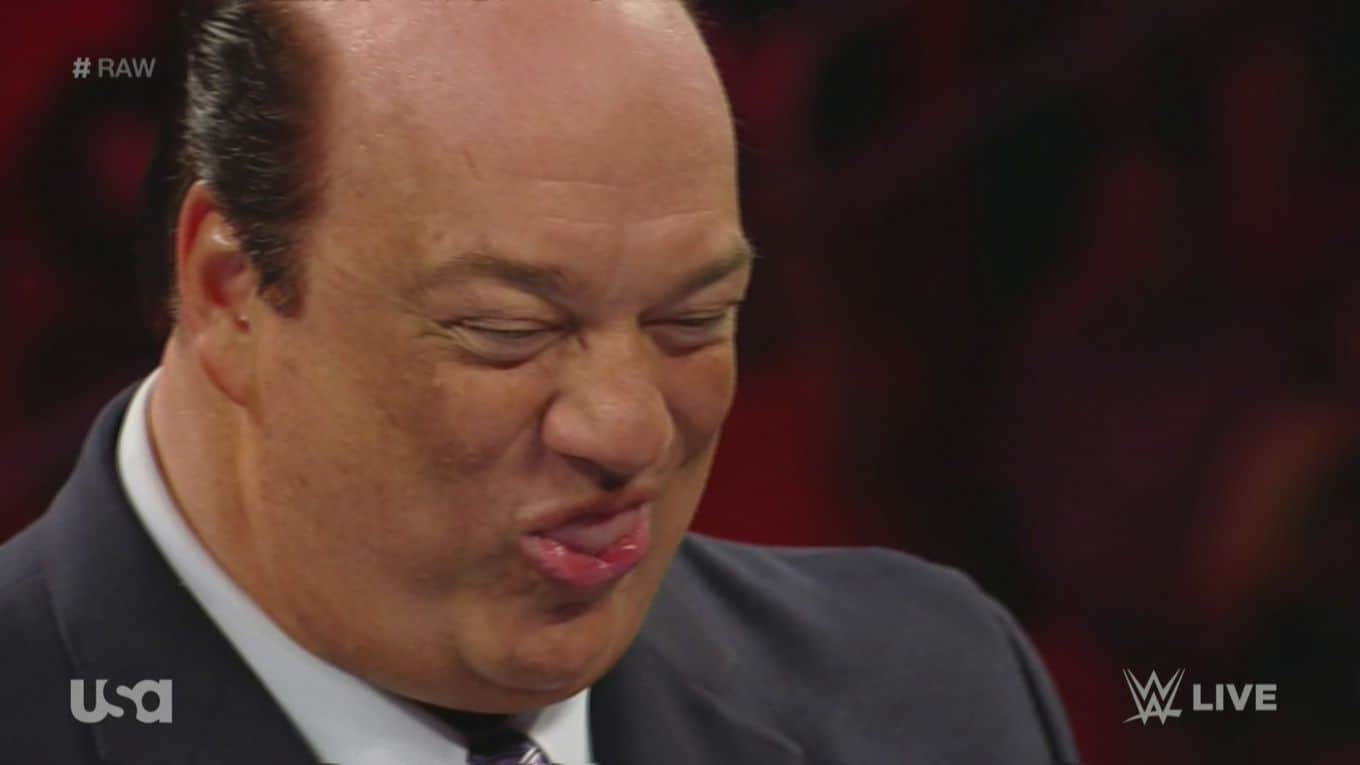 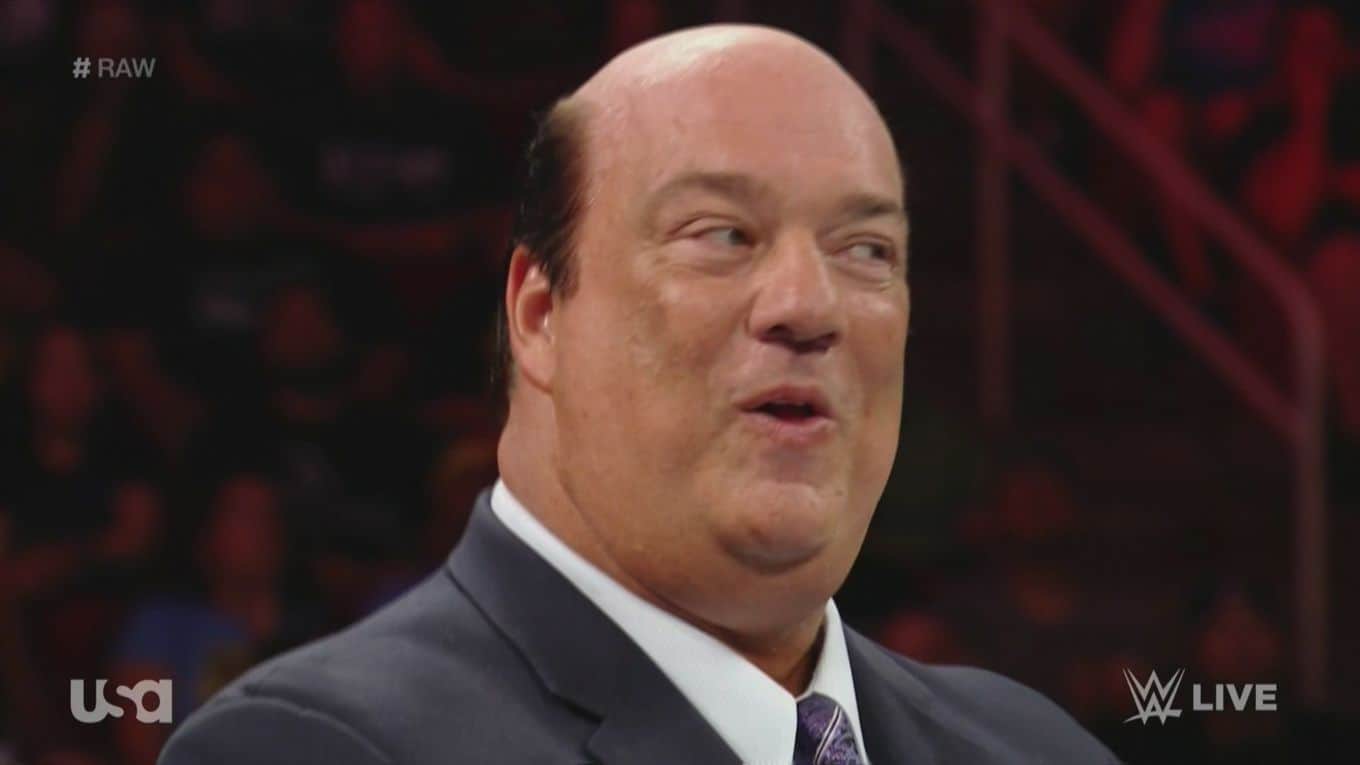 Speaking of which, a CM Punk UFC ad airs right after the segment with a chant for him – perfect timing! A Roman Reigns hype video airs with comedically-epic music. Young and Titus come down for another match. Titus bullies him around on the floor after they fight with some punches mid-ring and he chucks him over the top rope to the floor. Titus tosses him through the barricade and yells at fans to take pictures. LOOOONNNNGGGG neck wrench by Titus. Young wins with a crucifix and Titus attacks Bob and then hits the Clash on Young. Young won, but there were no winners in this segment. 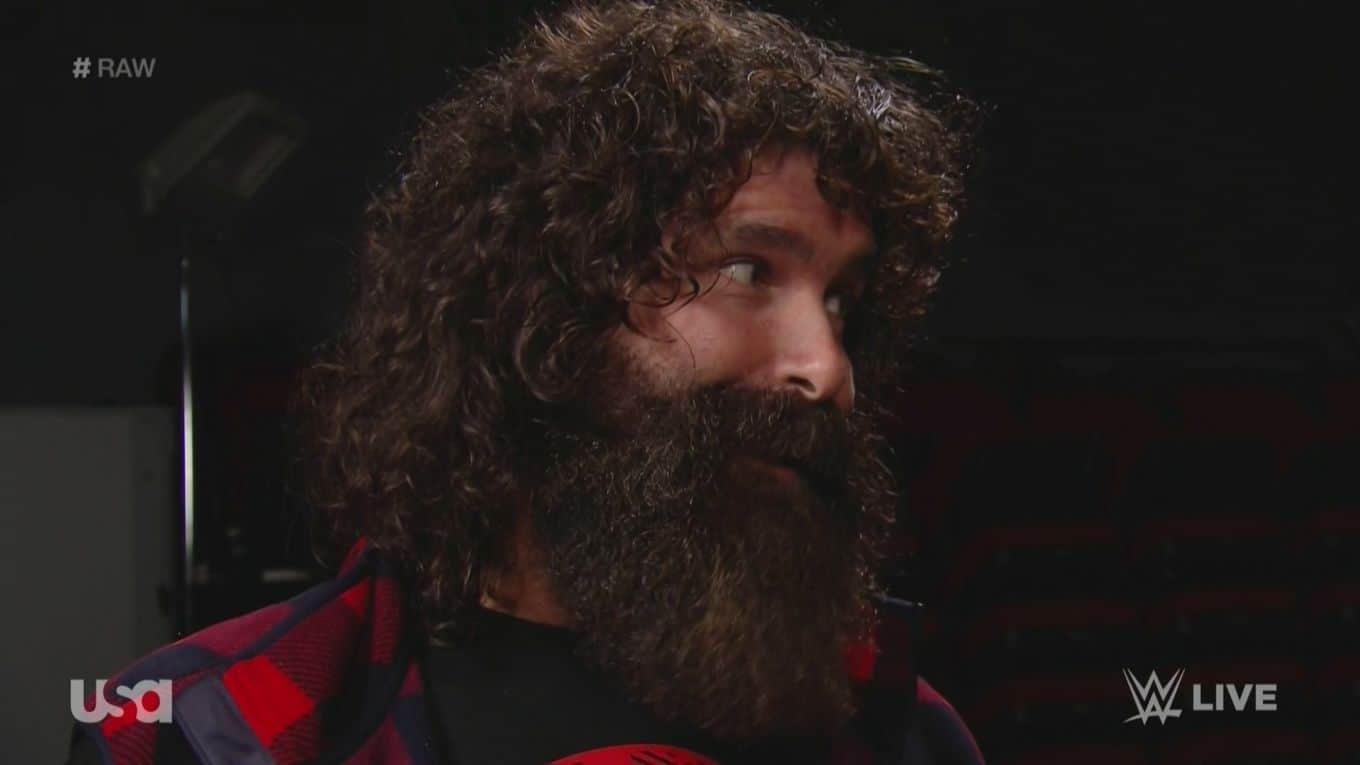 Backstage, Mick blames himself for what happened to Stephanie. She talked down to Paul Heyman and insulted him and his family – why would she need protecting? Stephanie says they will crown the first-ever Universal Champion tonight. Poor Finn. Mick is out holding the Universal Title while Steph cheers for him – so she’s a face in this segment. Roman is booed heavily, and he’s also a face. Owens gets a huge pop and they hype up how one year ago, he won the IC Title in this building. Enzo gets a huge pop with Cass, hyping up him becoming the new Universal Champion. Big Cass and Enzo are legit more over than Roman. Amazing and sad on several levels.

Cole talks about the history of the Universal TItle. “Stephanie said that with a global audience watching, it was named the Universal Title” Well, it was named for the WWE Universe, and done by Mick on-air and not Steph, but whatever. Cass boots Roman all the way to the floor and Seth dives on them. Big Dog dives on Owens and Cass. Roman runs wild on both Owens and Seth. Cass takes out Roman with a boot! Seth gets 2 off a schoolboy, but eats a powerslam and an elbow. A Superman punch prevents the East River Crossing. Owens frog splashes Cass to take him out.

Roman hits a tower of doom to Seth and Owens off a superplex and gets 2 on each. Seth ducks a Superman punch and gets 2 off a Falcon Arrow. Superman punch hits Seth for 2.5. Superkick by Owens to Seth leads to a pair of cannonballs. He eats a Superman punch for 2.5. Owens goes for the powerbomb, but eats a mid-move Superman punch! Big Dog Bomb gets 2 for Roman on Seth. HHH returns and pedigrees Roman on the floor! HHH tosses him in and Seth eliminates Roman! He tosses Owens in. Owens is being set up as a huge character babyface – or a top-level heel. Win-Win either way. HHH PEDIGREES SETH AND OWENS WINS! Kevin Steen just won his first World Title in WWE! This is outstanding – although I’m not sure if HHH turned face or what. Owens is in tears and this feels like an incredible moment for him, even if it is just a way to put HHH back in the main event picture. A huge “you deserve it” chant breaks out, and if they want to, they could have just turned Owens into a huge character babyface. 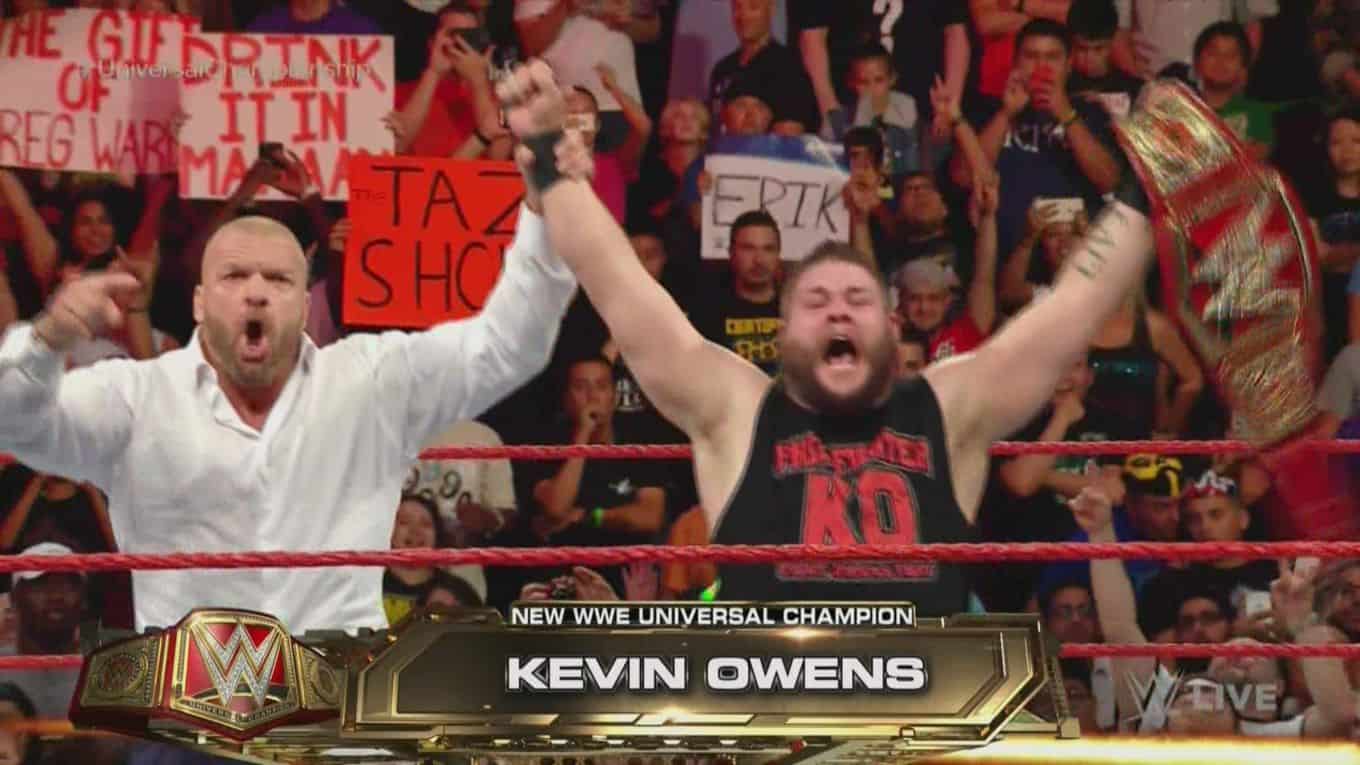 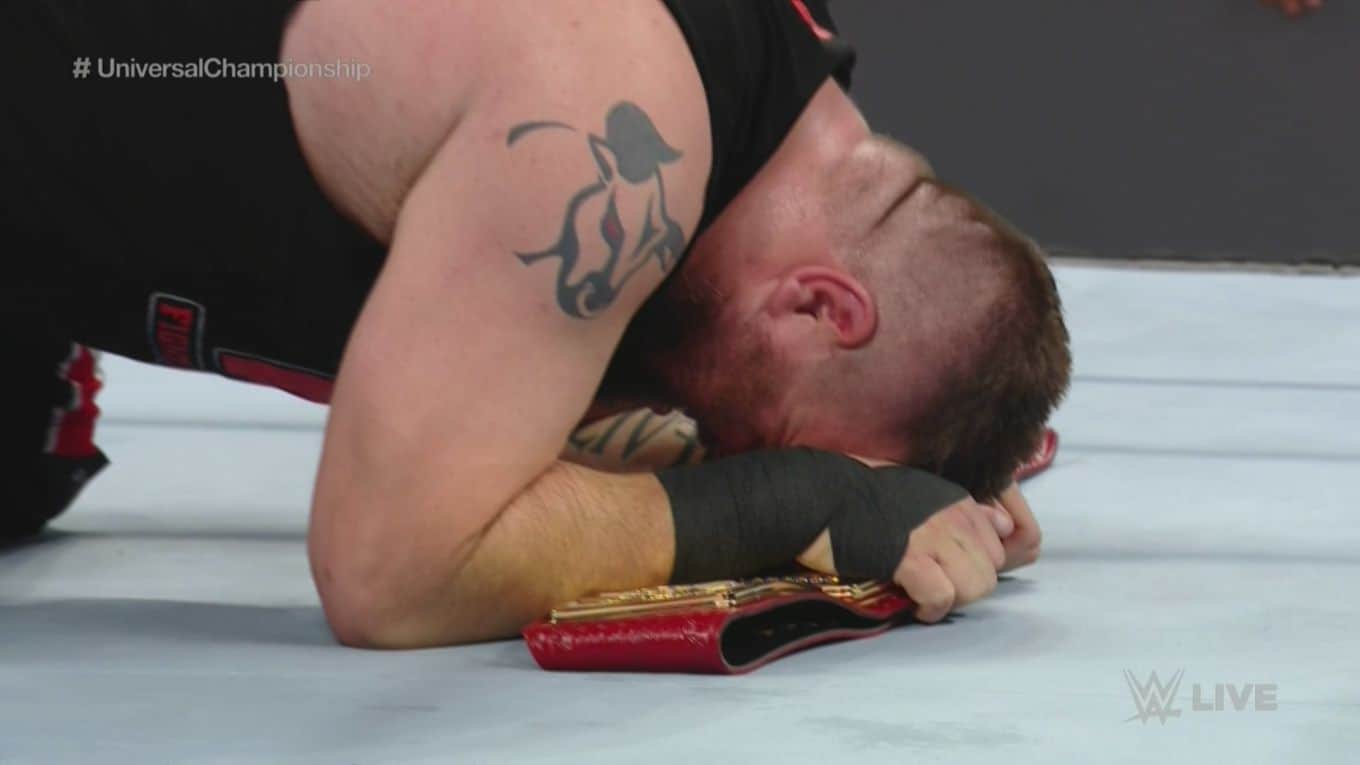