WWE and its workers / superstars use social media in very creative ways and even to advance storylines.

Well, an interesting storyline has developed on twitter between two participants of the Fatal 4-way for the WWE Universal Championship belt: Seth Rollins vs. Kevin Owens.

Haven't ya heard? "Dangerous" is my middle name, but "next Universal Champ" works just as well. #raw

My middle name is Yanick and I'm still walking out of #Raw (it looks better with a capital "R") Universal champion. https://t.co/jKz4gnNsbP

Who wants to see me put this chump in his place? WELL worth the price of admission. #RAW https://t.co/7gADCIrUkg https://t.co/cPqHgvaelu

You misspelled "champ"…Also, I don't need you to put me in my place, buddy. I can get to the top all on my own. https://t.co/kZYBOfQga3

Who do you think you're talking to, pal? I'm not @iLikeSamiZayn over here. https://t.co/qlzoxszeQA

Seth…Come on now! No conflict between us could ever be so serious that I would ever confuse or compare you to that https://t.co/WZ357a9fZA

They have had more friendly moments in the past though. 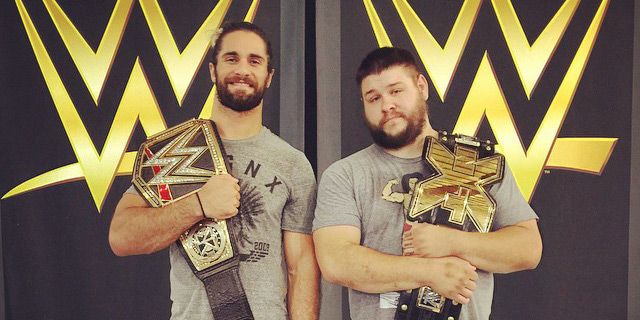 This would be a great feud.

Anyhow, the two other Fatal 4-way participants, Roman Reigns and Big Cass, have not tweeted at any of the other Fatal 4-Way competitors as of this typing. However they have referenced tonight’s bout.

#Raw at the @ToyotaCenter in Houston. The return to the top. #UniversalChamp #TheGuy

How You Doin' Houston. Get your tickets for RAW @toyotacenter. Guaranteed a new Universal Champion will be crowned. https://t.co/KOZ6AnHcqy

Well, based on Big Cass’ message it looks like there will no cluster-f ending to the match and someone will walk away with the title.

Should be a fun night. We will have the crowning of the 2nd ever WWE Universal Champion on WWE Raw.