This is a HUGE weekend for comic book and pop culture fans with both Fan Expo Canada happening in Toronto and the Baltimore Comic Con going on at the same time. Plus, there was the Diamond Retailer summit to open the weekend which is also a hot bed of comics and pop culture news! Check out the latest news below! 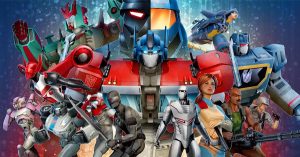 IDW announces some big that represents the fallout of their Revolution event! The checklist for Revolution is below from September to to November 2016.

Here’s the news straight from the publisher about IDW Revolutionaries launching in December 2016!

A New Team of Hasbro Characters Unite To Form REVOLUTIONARIES

REVOLUTIONARIES will be born. REVOLUTION was only the beginning! Once the dust settles on Revolution, IDW’s groundbreaking event series that catapulted a new comic book universe into existence, heroes and villains will rise from the ashes to form new alliances and take on even greater challenges in this brave new comic world.

A G.I. Joe, a man of action, and a few Cybertronians thrown in for good measure, will form the basis of a team unlike any ever conceived before.

This series will reunite Revolution writer John Barber and artist Fico Ossio and will team characters from every corner of this action-packed series, showcasing a full slate of mind-blowing guest stars, including both old favorites and exciting new additions. In addition to the regular players of Action Man, Blackrock (Transformers), Mayday (G.I. Joe), and Kup (Transformers), Revolutionaries will feature a rotating cast of teammates, opening the door for dream team-ups from issue to issue. These Revolutionaries will band together over the course of the unraveling central storyline, a mysterious plot, that serves as the backbone throughout the series.

Join the REVOLUTION on September 14 when the debut issue arrives and prepare for the next stage of evolution with REVOLUTIONARIES this December.