I’ve got something special for you smark weebs.

One of the greatest pro wrestling organizations in the world, New Japan Pro-Wrestling (NJPW), is collaborating with Toei Animation on an all-new anime series, Tiger Mask W!

According to the official website for the show, Tiger Mask W is set to premiere on October 2, 2:45 am on TV Asahi, and it features several NJPW stars! They include Kazuchika Okada, Hiroshi Tanahashi, Yuji Nagata, and Togi Makabe! The superstars will appear under the project in their own names.

After the episode premiere, the show will continue to air on Saturday nights. Toei Animation also plans to have the show available internationally for streaming.

Here’s a brief promotional package! Not quite a trailer, but still enough to satisfy… 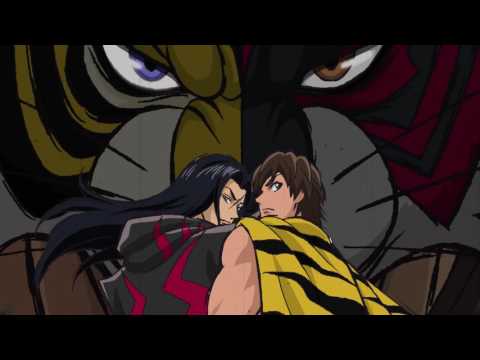 Here’s a translation of the description of the video package, courtesy of Anime News Network:

The protagonists are two young pro wrestlers, Naoto Azuma and Takuma Fujii. Both were trainees of “Jipang Pro Wrestling,” a small pro wrestling team, until it was crushed by the evil “Global Wrestling Monopoly (GWM)” team. To plan their revenge, Azuma trained at the foot of Mount Fuji, becoming the “New Tiger Mask,” while Takuma entered “The Tiger’s Hole,” the organization that manipulates GWM, becoming “Tiger the Dark.”

Also according to Anime News Network, this updated version of a past series set in the same world will serve as a “revamp” of the world using old school cel animation combined with industry standard 2D and 3DCG animation. Cool!

Here’s some additional history on the Tiger Mask world, from Anime News Network:

The original “Tiger Mask” is the alter ego of the character Naoto Date, a pro wrestler who goes against an evil wrestling organization and fights for children in an orphanage. The original manga ran from 1968 to 1971 in Kodansha‘s Bokura magazine, Weekly Shōnen Magazine, and other magazines. Along with the baseball manga Kyojin no Hoshi, Tiger Maskis considered Kajiwara’s life work. The manga already inspired two anime series in 1969-1971 and 1981-1982. The 1969 television anime series recorded 31.9% as its highest rating. There are even real-life wrestlers who have been inspired by the manga and anime to compete under the Tiger Mask persona.