Matt laments the Hardy Platoon after Delete or Decay. Senor Benjamin has been kidnapped and Vanguard One is missing! Matt tells Nero that he will ask the seven dieties to help him escape from his Chair of Wheels. Matt chants and tells Brother Nero to regenerate. Immortal Jeff Hardy returns and says “the CHAMP IS BACK YOU CAN’T SEE ME!”. Matt isn’t happy with that, so he gets Brother Nero out of the water instead. Matt vows to find his drone, and then Bobby Lashley comes out. Boy is the tonal shift on this show strange. 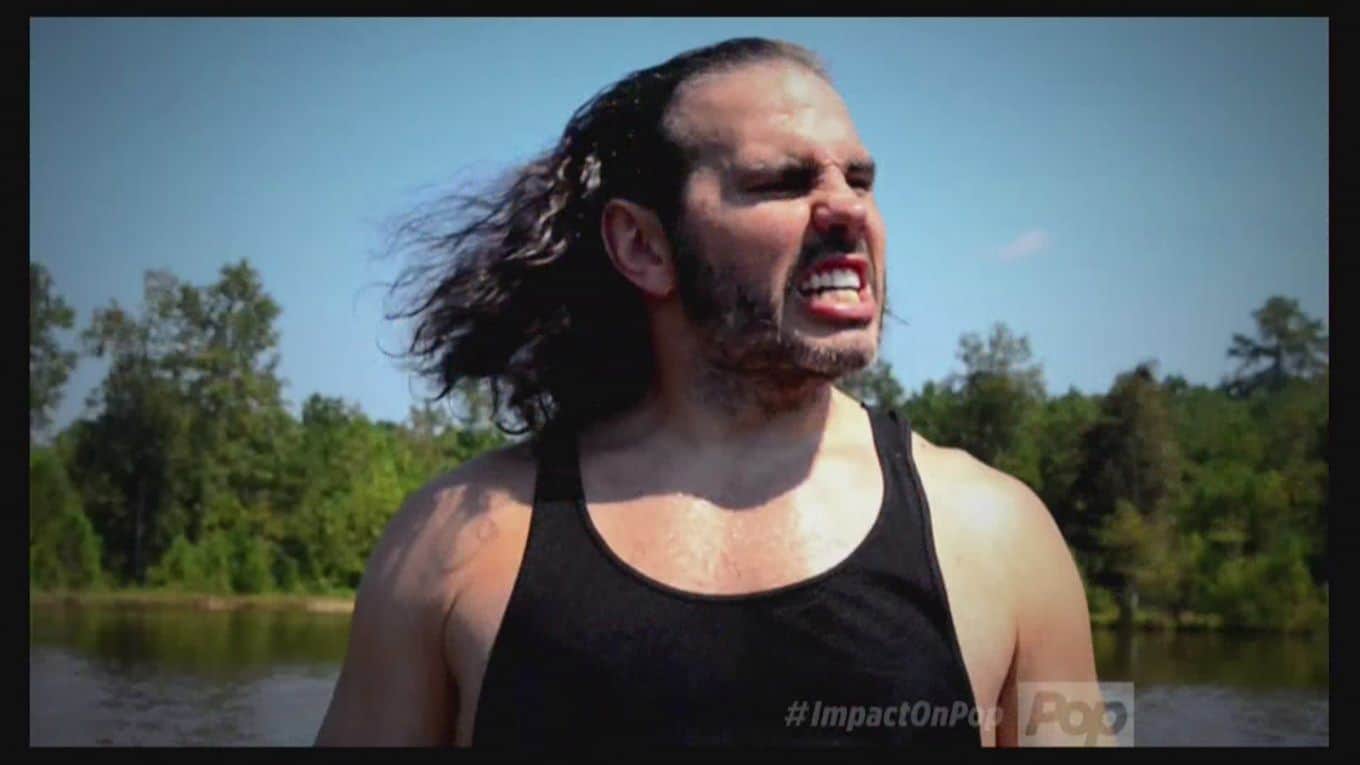 Josh calling him “THE WALKING JUGGERNAUT OF FORCE” seems odd too. JB interviews Lashley and asks him why he almost ruined the BFG main event last week. He says no one is as dominant as him and he took offense to EC3 saying he’s the face of the company, because he’ll break his face. He says he could destroy JB, but that would be a joke – so Grado comes out instead. Grado says he likes making guys laugh – including EC3, but he’s going to prove that he isn’t a joke and that Lashley is a coward of a man. Lashley jumps him and says that guys need to learn to stop pissing him off. He says no one can beat him, so Moose comes out with three of about six fans shown on his intro doing the “Moose” bit. Moose says he’s going to beat him and whoop his ass. He says that everyone in the Impact Zone wants to see Moose vs. Lashley, and tonight, he’ll deliver it.

The Grand Championship match concept is run through by JB really quickly, and nothing is given any time to breathe. Aron Rex says that the Impact Grand Championship is unlike anything ever in pro wrestling. Aron Rex vs. Trevor Lee is up next. But first, Lashley won’t fight Moose – it’s bad for Moose’s health. Lee gets no intro Round 1 features a lot of headlocks and Lee cheating to gain an advantage. Rex slugs him, but gets taken outside. Josh plugs the BFG VIP experience and Lee gets a 2. Rex gets the edge in the judging for round 1. Lee gets 2 off a slick Superman forearm. Rex hits a nice lariat and a discus elbow gets the win. Great finisher – far better than anything he used in WWE. 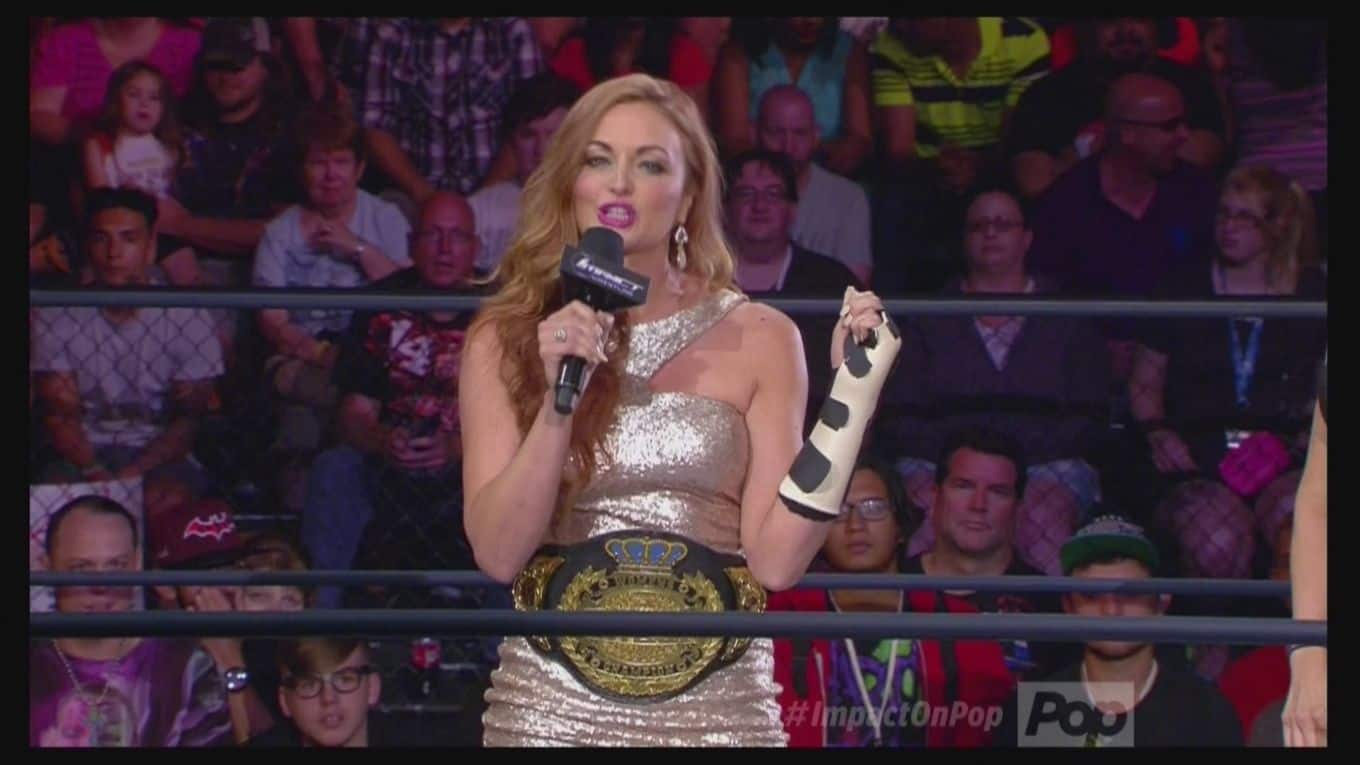 JB talks to Maria, who says she will find out who she faces at BFG and she will win at BFG no matter who wins tonight. Since Maria doesn’t want her win to overshadow Gail’s HOF ceremony, she’ll do that tonight. Back at the Hardy House, Matt searches for Vanguard 1. He finds it in a tree and pleads with it to not die. He begs the gods to give life to V1 and a happy music montage shows V1 helping Benjamin with yard work, beating him at chess, and then coming back to the life.

Maria wears the belt over her dress and has Allie by her side. An “Allie’s better” chant breaks out. She insults Allie for being stupid and common and that everyone talks about Gail and she comes down to be insulted. Maria airs a highlight reel of herself beating up Gail and gives her a photo of Maria with the belt. Allie got Gail a gift because she’s the best female wrestler ever, so Maria steps on it. Gail and Maria screech at each other for a while before Dixie Carter comes down. Dixie brings up last week’s storyline of Maria being stripped of her power while she is champion and Dixie promises Gail a ceremony she deserves, and she deserves a title shot too – so she’ll be in the knockouts gauntlet. We get a recap of the Spud vs. Sutter feud and we’ll get a Spud vs. Sutter empty arena exposed turnbuckles match…next! Thank God they didn’t hype this stipulation up or anything. 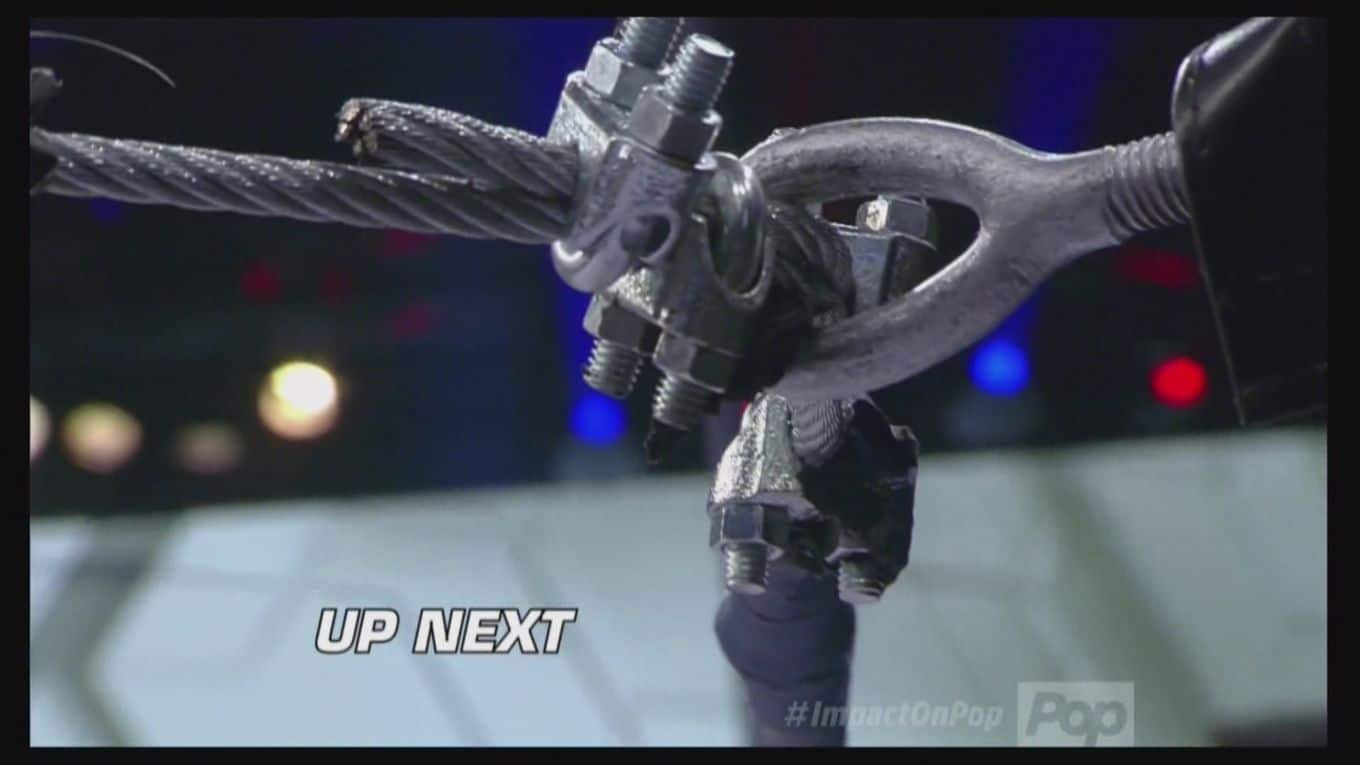 JB introduces the exposed turnbuckles match and gives everyone intros – even though they have no themes. Pope talks about the “real tension” here. They brawl on the ramp and the bell rings. They fight past the guardrail and go near one of the many darkened parts of the building. Spud gets tossed into some chairs, which reminds me of the Uncensored ’99 match between Stevie Ray and Virgil, and then Sutter whips him. Spud gets punched and makes comedic grunting noises. Spud goes to smack Sutter’s mouth into the steel, but he mule kicks his balls. Spud gets sent into the steel buckle back-first, then face-first and Sutter wins. Spud coughs up bright red stage blood. Vanguard 1 searches for and finds Senor Benjamin, leading Matt to the “decrepit erection”. Matt tells Benjamin to heal up for THE GREAT WAR AT BOUND FOR GLORY!

Delete or Decay recap. The Hardys come out and talk about the war and Nero now has OBSOLETE face paint on. Reby bounces around and says “delete!” Rosemary calls them silly and says that Maxel deserves a family that isn’t broken and that allows him to embrace his true self. She raises a valid pair of points there. Abyss says the titles are beautiful, and the Hardys will never experience their beauty. Steve says that their obsession with gold is mind-boggling since they offered them decay. The Hardys say they’re broken, but they survive and they will render Decay Obsolete at BFG. Matt wants THE WORLD TO BE THEIR BATTLEFIELD during the Great War. Rosemary insults Reby, and Rosemary learns that you don’t piss her off because they all brawl. Twist of Fates for all the heels leading to Steve yelling that war is only skin-deep. 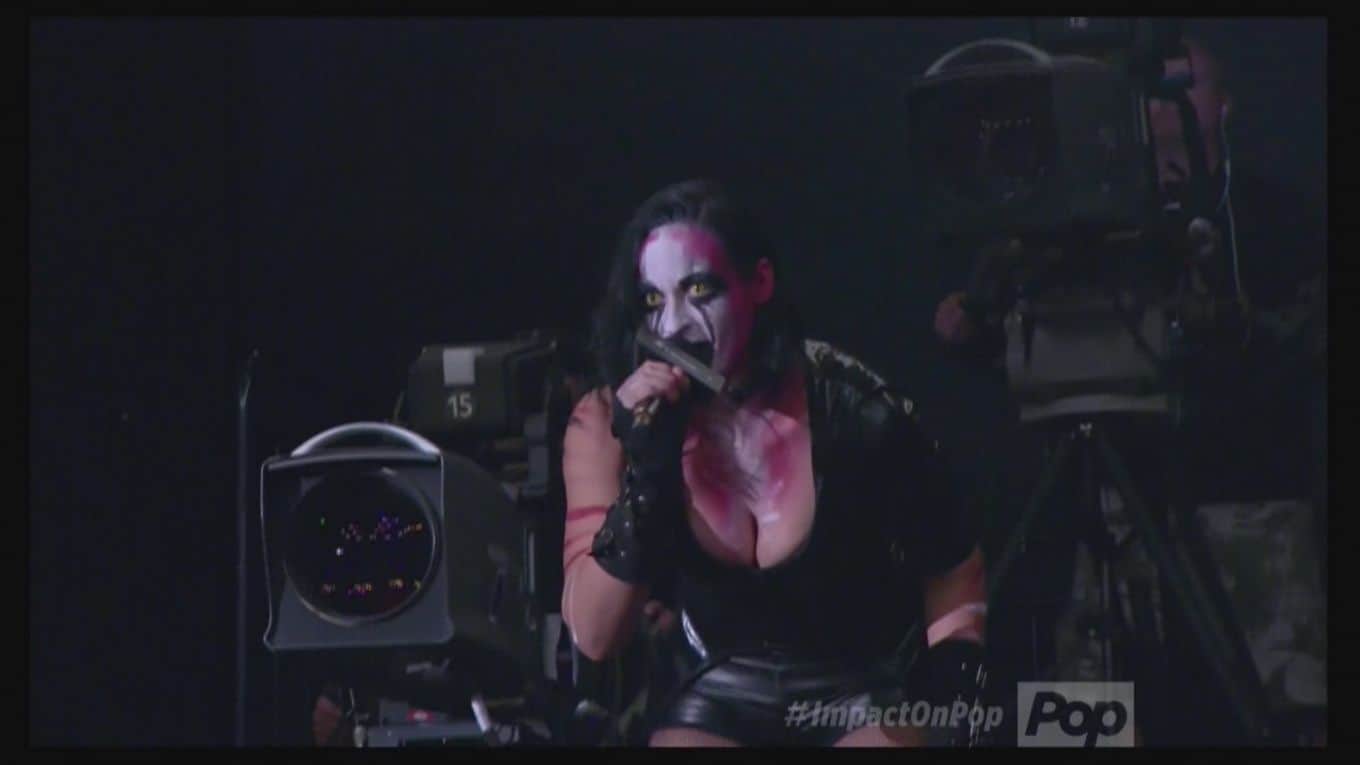 Bennett talks to Lashley and Lashley says he doesn’t care what Bennett has to say. Lashley says he doesn’t care what Moose said, while Bennett puts words in Moose’s mouth and Lashley sees through and says he’ll kick Moose’s ass and then kick Bennett’s. So Lashley is the one intelligent person in TNA. Allie has a new, super-happy tron and Maria replaces her with Lauren Van Ness. Pope and Josh bury her stupid name and opt to call her LVN or just LV. Jade and Laurel go at it, with Jade chopping away and hitting a nice high kick.

Lauren lands some awful forearms while Josh talks about “strong style”. Sienna comes down and she and Jade get into a bad Frye-Akiyama exchange. Marti comes down and everyone stomps away on everyone else. Raquel comes down and botches getting into the ring – so she would be doomed even if this was a reverse battle royal. Josh hypes up Madison, who badly needs her Killer Queen song back. Rayne lands a series of enzuiguris before a break. Pounce by Sienna before Marti pedigrees Jade. Laurel takes out Madison, and Jade is eliminated by Marti. Laurel tosses out Marti. Raquel locks on a sleeper, but Sienna tosses her over the top with a nasty apron bump to the floor. Maria and Sienna argue and Allie holds the ropes down, leading to Gail tossing Laurel out via the low bridge. Sienna vs. Gail is up, whlie three fans chant “Allie’s better” in an annoying manner at the heels. Eat Defeat hits and Gail wins – leading to Maria making cartoonish faces. 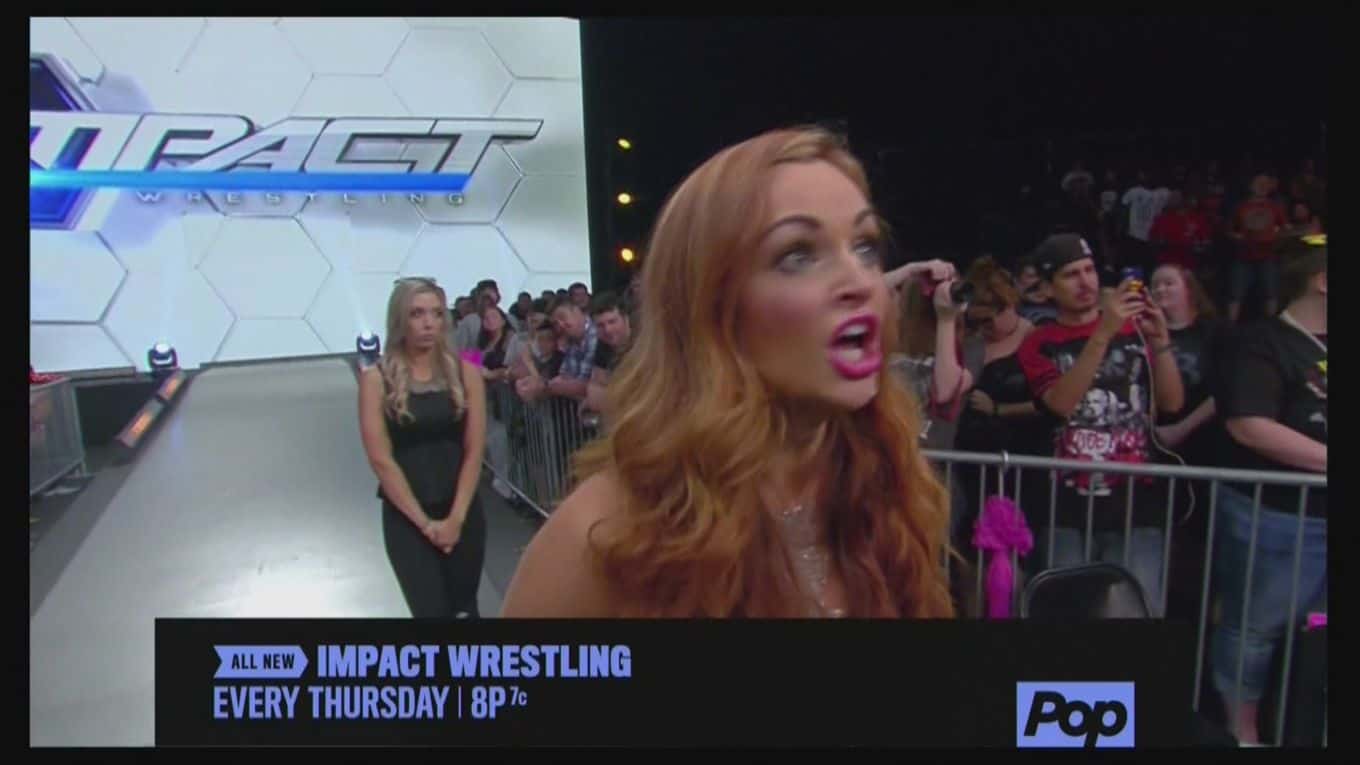 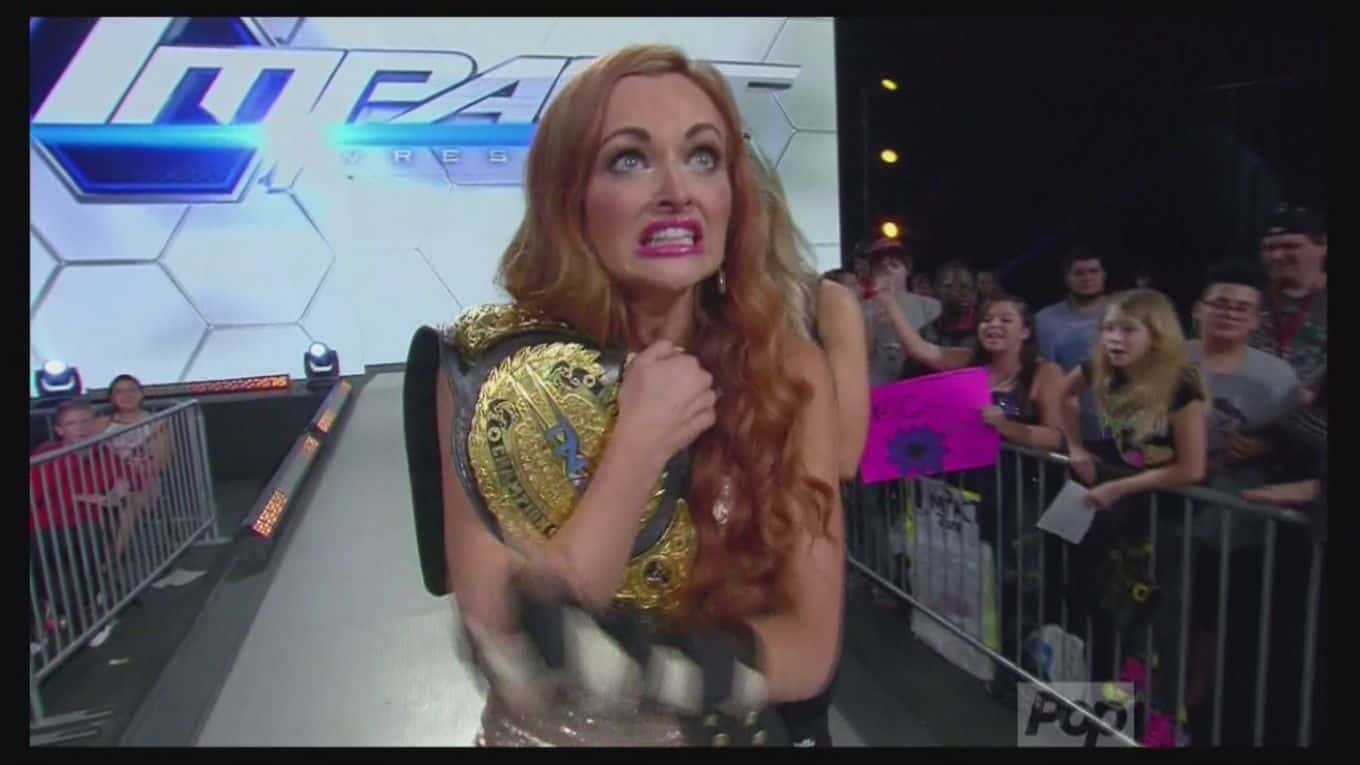 Shera faces Eddie Edwards in a Grand Championship tournament match. This may be the toughest test of Eddie’s entire career. Shera gets no intro, while Eddie gets a small one. Eddie creates a lot of movement while Shera slowly runs around and runs over Eddie after a dropdown. Eddie goes in slow motion to help Shera through things and it’s still way too fast for him. Shera is sent to the floor and eats a dive. Mid-ring, Eddie hits the Boston Knee Party for 2. He goes for the heel hook, but round 1 ends. Eddie wins the round, but holds the ribs apparently due to the dive.

Shera works on the ribs – giving the round system a bit of a purpose now because round 1 logically led to the events of round 2. The downside is it’s resulting in Shera being on offense, and he has very little of that to go around. Flapjack hits for 2 before he locks on a reverse bearhug. Judging by this, someone gave Shera a Best Of tape and it was the Best of Nikolai Volkoff. Shera tackles him for 2. Eddie locks on an STF, but the round ends. Shera wins round 2 and once again, we don’t even see the judges. At least we got to see them on-screen, unnamed, last week. Eddie forearms away, but a World’s Strongest Slam gets 2 for Shera. Eddie gets a high kick and locks on the half crab to win. This was slightly better than expected, and the right man won. 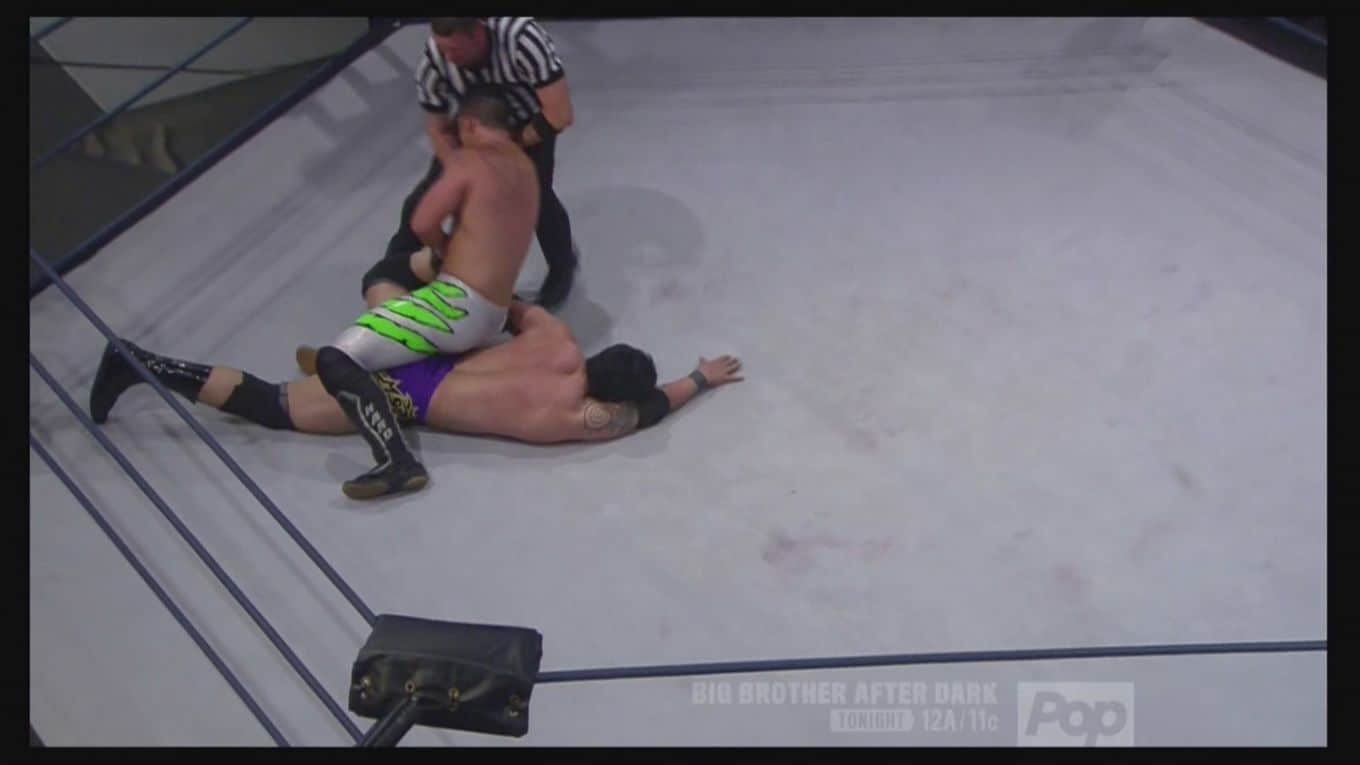 Moose walks backstage for the main event – a chat with Lashley. Good God what a bad Raw impersonation Impact is – they want to be WWE, but instead of copying the WWE formula that works in NXT, they’re obsessed with the worst of Raw’s tropes. Moose comes out and even fewer fans do the “Moose” bit, and really, why should they? The ROH fans got behind him because they saw his progression from day one. In TNA, he showed up and they’ve established that he’s a guy named Moose and he’s a football player – that’s about the extent of his character. There’s nothing to latch onto and his promos just serve to further the storylines and not his character, which isn’t over because his storylines are poor.

Lashley says one of the funniest lines of the year saying that he only fights for big money in big venues on big events, here in front a few hundred people that aren’t making a sound. Lashley wants Lashley vs. Moose for big money, but Moose beats him up now. They brawl near the announce area resulting in a lot of echoing. Lashley kicks his ass and mocks the “Moose” bit before Moose dropkicks him. Lashley hits the spinebuster, which is now “the dominator”, the third move he’s done called that after the actual dominator and the running powerslam. Moose uppercuts his way out of the spear and hoists him up top before Bennett comes down and gets punched. Bennett rakes the eyes and Lashley hits a spear. EC3 runs down to make the save. Yup. That was an episode of Impact all right. 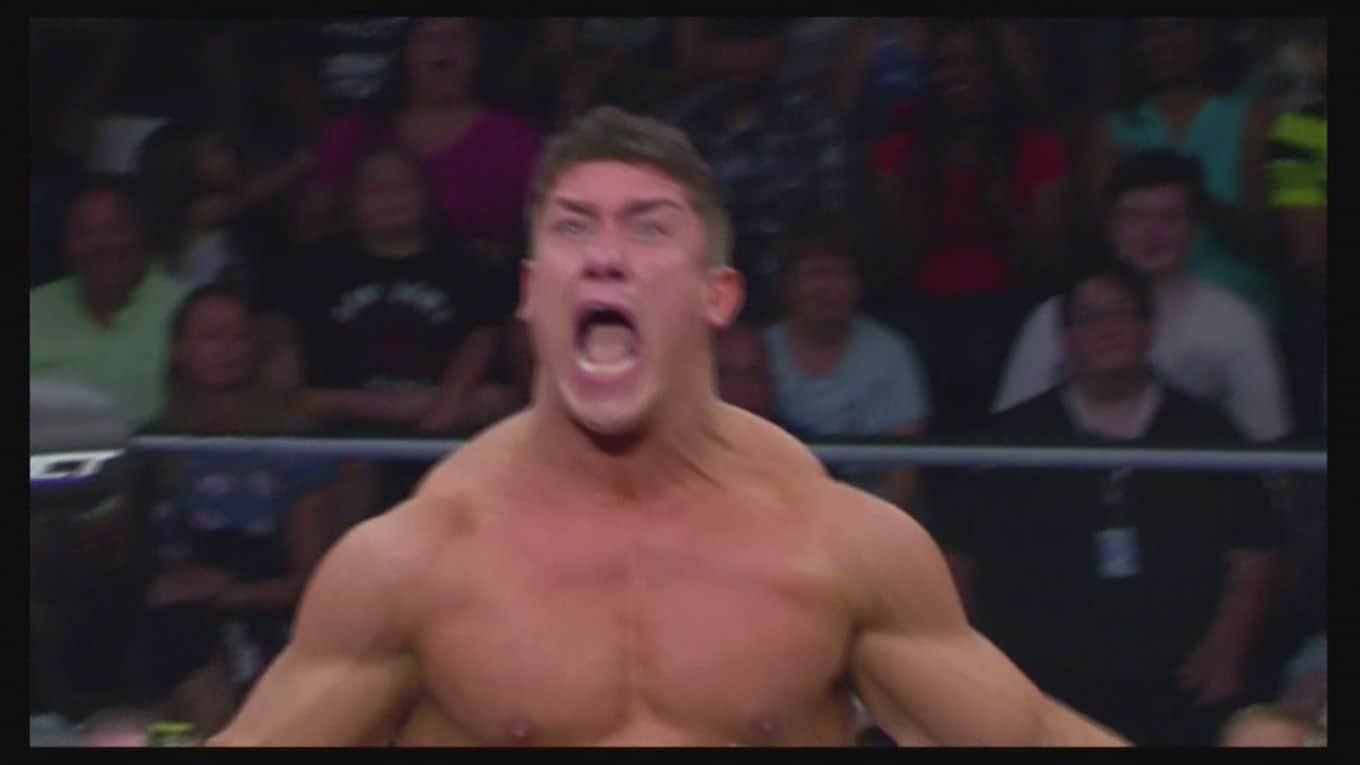