JB is mid-ring and brings out the Lethal Lockdown captains. EC3 gets a pretty large reaction. Lashley comes out and we get brief hype videos of their teams. They yammer back and forth and the fans sing EC3’s theme. DJZ faces Eddie Edwards next. Back and forth headlock and headscissors exchange. Eddie chops him and hits the suicide dive. Eddie gets rana’d out of a powerbomb for 2. Rolling DDT hits Eddie and ends it. Trevor Lee and Andrew Everett come down and jump Eddie. Maria praises Laurel in front of Allie, who is once again called stupid. 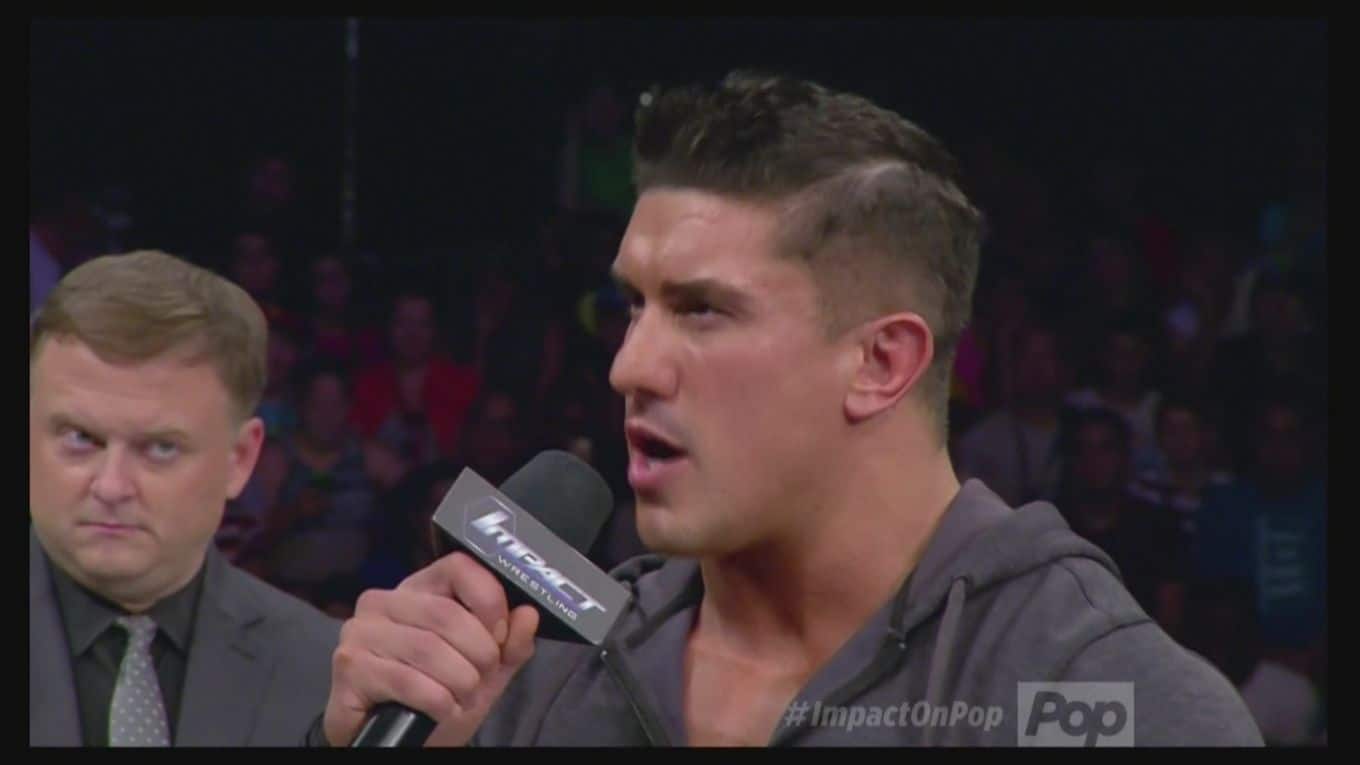 Josh  meets with Moose and Mike Bennett, who looks absolutely ridiculous in orange pants. They exchange very generic angry phrases with no passion or emotion. Josh talks about how “intense” that was. Madison comes out to face Laurel Van Ness, with “HI I’M ALLIE!” getting a nice reaction. Josh talks folks not getting her name wrong, while Pope calls her LVN for short. Thank God that solves the problem of her name sounding stupid. LVN gets dominated and asks Allie to powder her face, so she does. LVN pokes the eyes, stomps her face into the mat and hits a slow running chop. LVN was apparently spoiled as a kid…what a rich character this is. So much depth. LVN kicks her to win, but she’s called “Laurel VANESS!” by Allie and mocked for it. Lashley meets with Maria and Bennett about them not being friends. 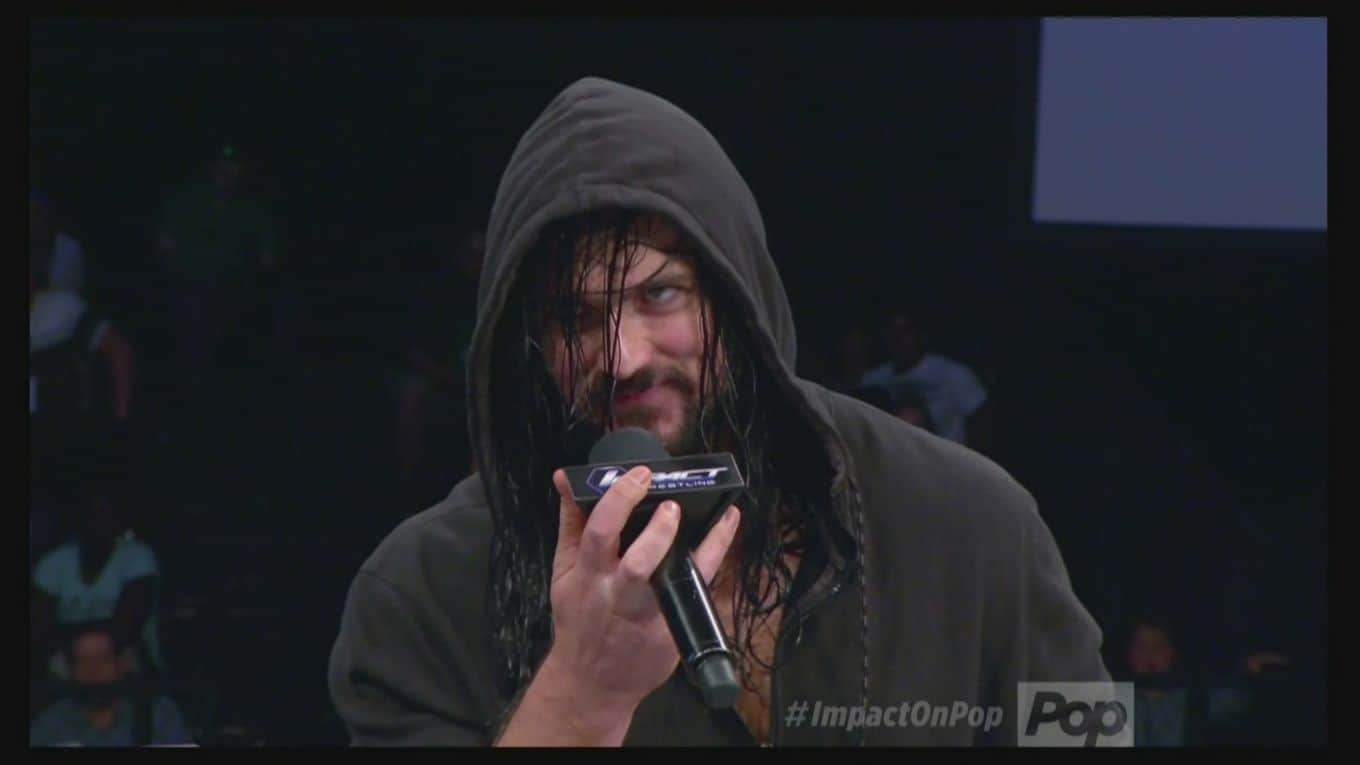 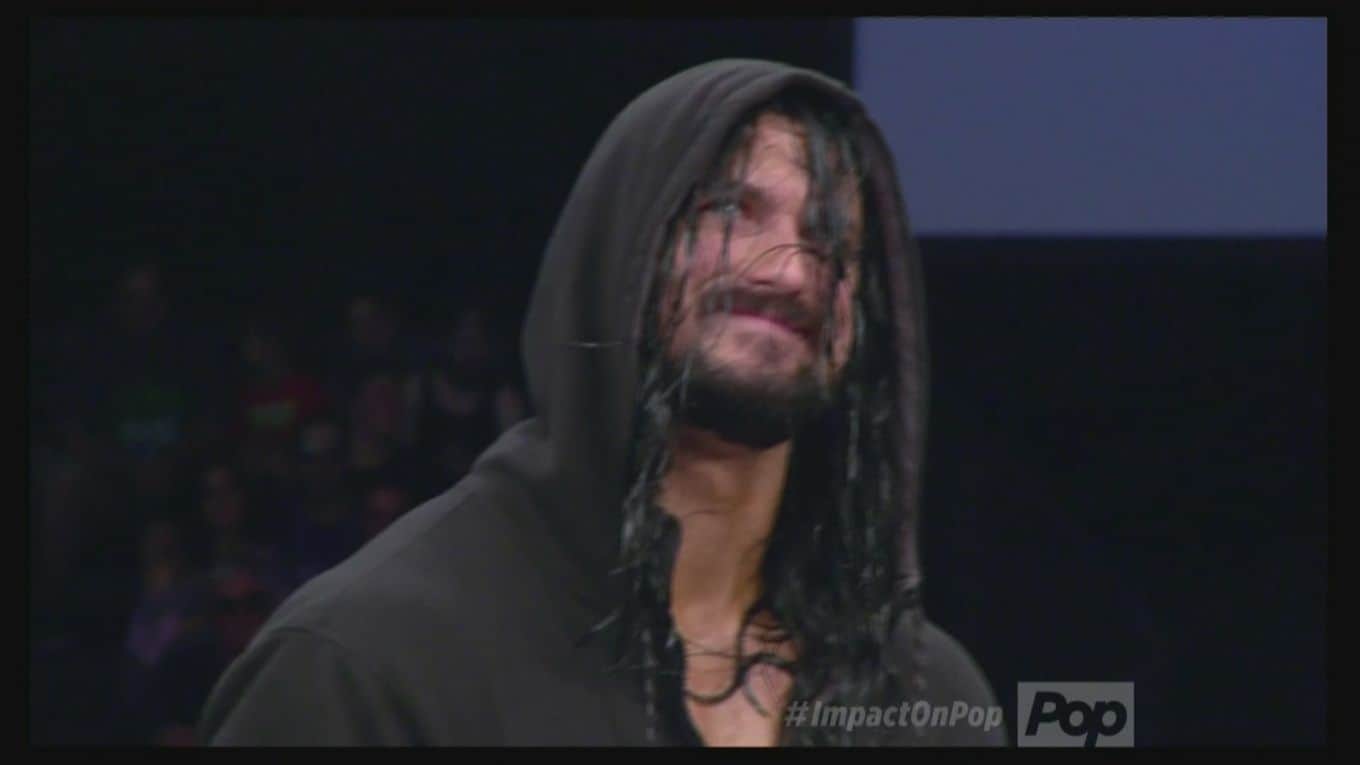 Drew talks mid-ring about being in the finals for the Impact Grand Championship, before Aron Rex interrupts. Drew talks about how when he came to TNA, there were cracks in the foundation and people were negative. He says that TNA has evolved to the best wrestling show on TV and that’s all due to him before holding mic like Sandow used to and says “you’re welcome!”. Rex tells him to stop stealing taglines and that TNA is changing the game, but it’s not just due to Drew. Rex throws insults at him and tells him that he’ll beat him at BFG and it won’t go to the judges. Drew mocks Rex for being a stuntman and says no one remembers who came after the son of God, and there will only be one winner – him. Drew piledrives Rex mid-ring after security fails to break them up, and they ponder about how this affects the Lethal Lockdown main event.

Decay talks about destroying the Hardys at BFG and how they’ll take the Broken Hardys and smash them into a million pieces. Reby faces Rosemary next, but first, a recap of the entire Decay-Hardys feud. Reby comes out to Matt’s theme looking like a crazy pissed off grandma with the dyed grey hair. Now in TNA canon, neither has been a wrestler, but Pope gives the edge to Rosemary. Rosemary licks Reby’s face while Josh mocks Pope for trying to call this like a wrestling match. Reby hits a spinkick in the corner before kicking her and then forearming her face on the mat. Twist of Fate to Rosemary, but Steve causes a distraction and Rosemary mists her. Everyone brawls and Rosemary sets up a table and side effects Reby through it off the apron while everyone else fights around ringside and then she screams “decay” a few times. Well, Rosemary has been one of the best acts in TNA all year and that remains the case today. 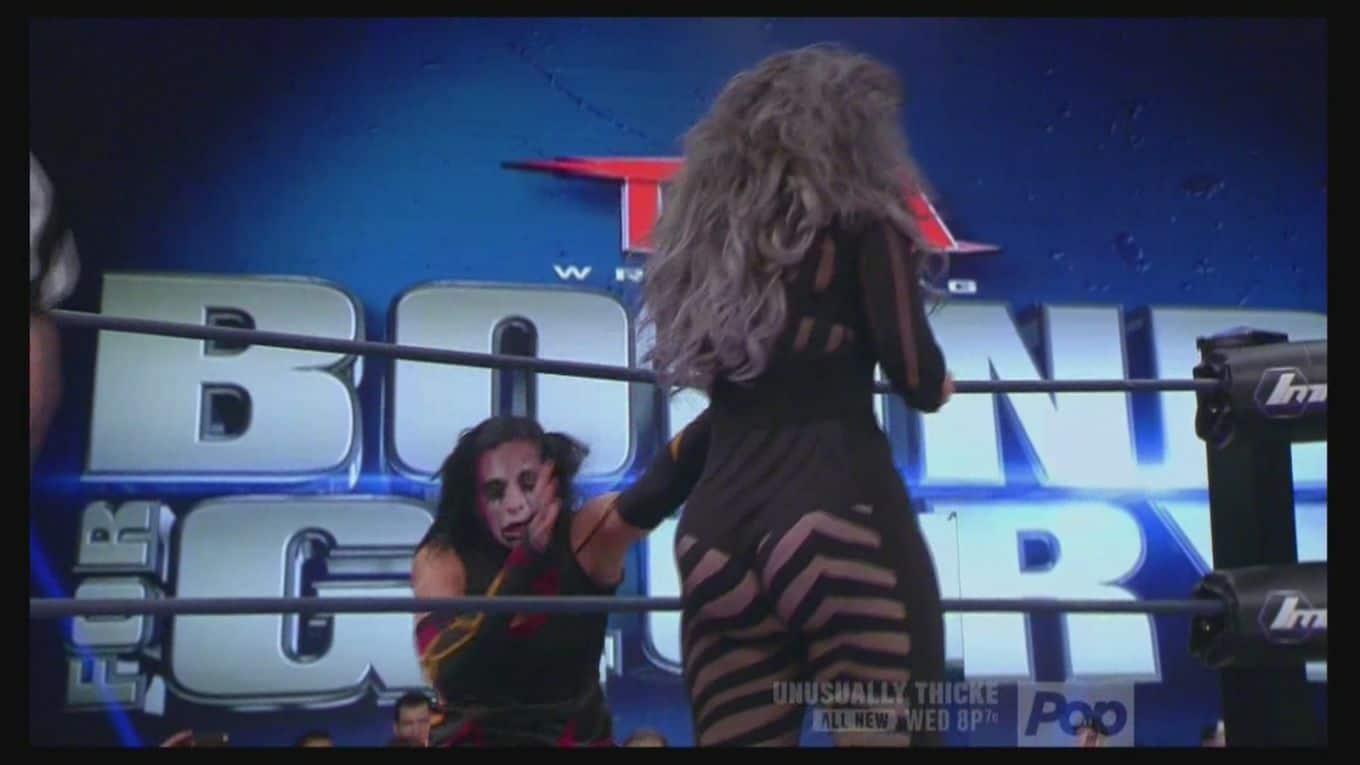 Lashley and EC3 flip a coin and we’ll see more the Hardys/Decay brawl next. Lashley picks heads and it’s heads – so yes, tradition continues with the heel getting the man advantage. Backstage, Steve hits Nero with a chair. Matt attacks the heels with a ladder and we get some corny camera angles while classical music plays while Matt beats up Abyss. Matt bites Abyss’s ear and climaxes, while Steve beats up Nero and wraps a chair around his throat and necks him with it. Abyss disconnects some cable and electrocutes Matt and we get a three-way split screen with Decay saying “decay”. 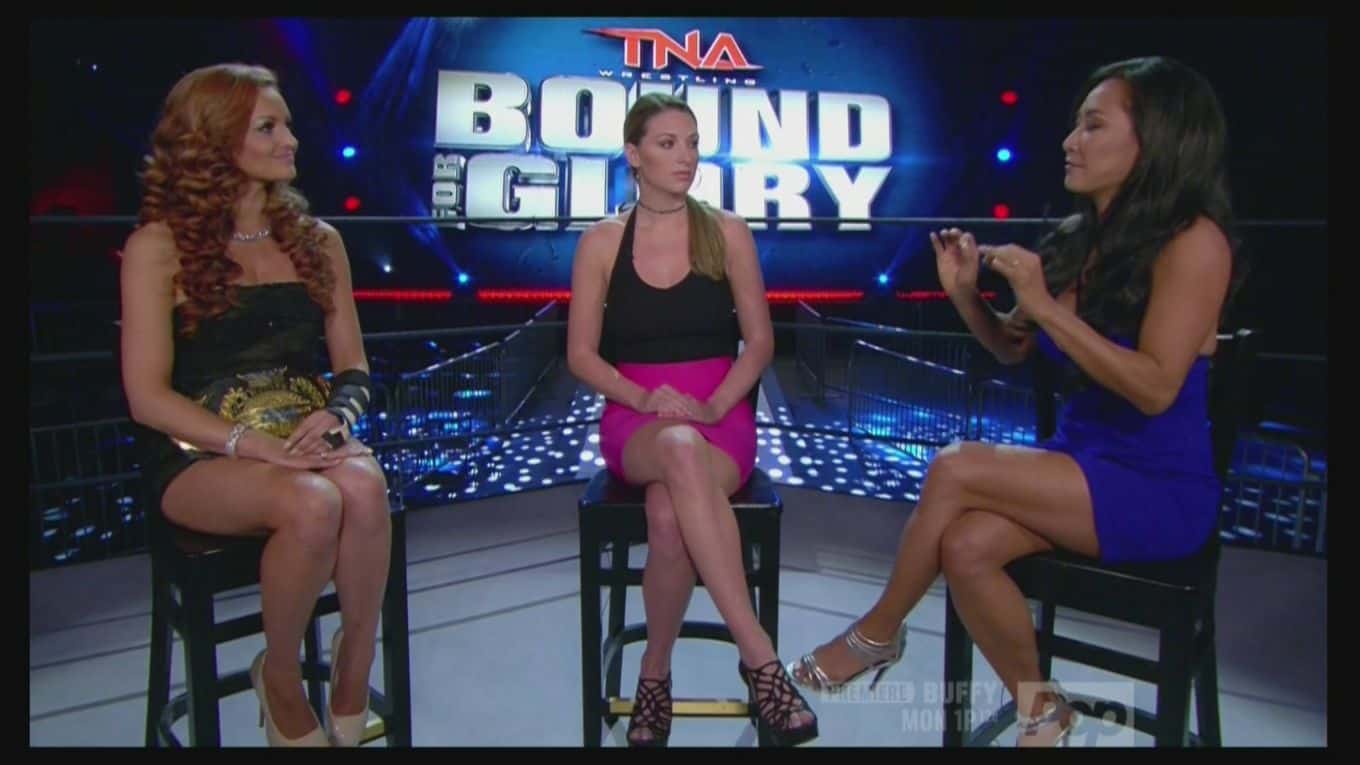 Cody’s Corvette video airs. Maria and Gail are interviewed mid-ring by McKenizee. Well, rather, they insult each other while she sits in the middle of the ring. Tyrus is interviewed about winning Bound For Gold last year, and Eli Drake wants him to fix things for him – because he likes what he did for EC3 and Matt Hardy. Tyrus wants to kick his ass for some reason. Tyrus doing anything but wrestling is better than him wrestling. Cody is shown briefly in a jacket taking promo photos.

EC3 thanks his team tonight and starts off the main event – now joining in by waving with the fans who sing his theme. Lashley teases facing him, but Bennett starts. EC3 suplexes him and lands a flying elbow. EC3 hits a stinger splash and a flapjack before landing the TK3. Drew is the second entrant and double-teams EC3 with Bennett. EC3 gets beaten up in the corner before Rex comes in for a save. Rex lands a series of bad punches and headbutts to Drew. Lashley runs in and beats up EC3 and Rex. Moose runs down and axehandles Lashley, who sells on a two second delay. Maria comes down and says she’s not ready. Moose misses a spear in the corner because Bennett moves too soon and Moose just throws himself into the corner anyway. Gail comes down and tosses her in, but she runs away and they fight to the back. 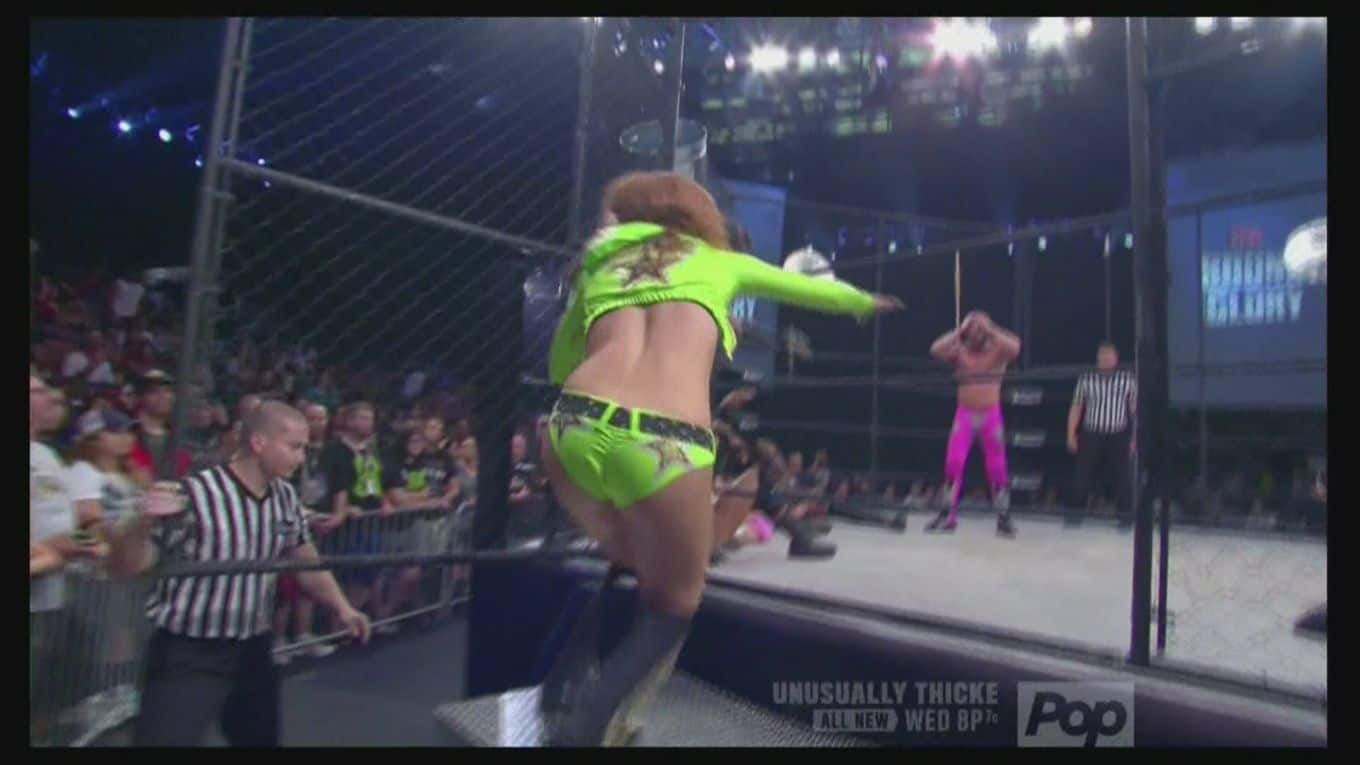 With everyone legally in the match, NOW the weapons are legal. Thank God all of these sworn rivals obeyed the rules in this no DQ match. Bennett hits a cutter on EC3 and superkicks everyone. Moose hits an Okada dropkick up top, but Drew ducks the Game Changer and hits the Future Shock. Spear to Rex by Lashley. EC3 canes Lashley and Josh reminds us that a win here lets the winner name the stips for the main event. Lashley spears EC3 and locks on the head and arm choke. EC3 gets the rope, but it doesn’t matter and he passes out and loses. Lashley picks a no holds barred match for the World Title match if Bound For Glory winds up happening. 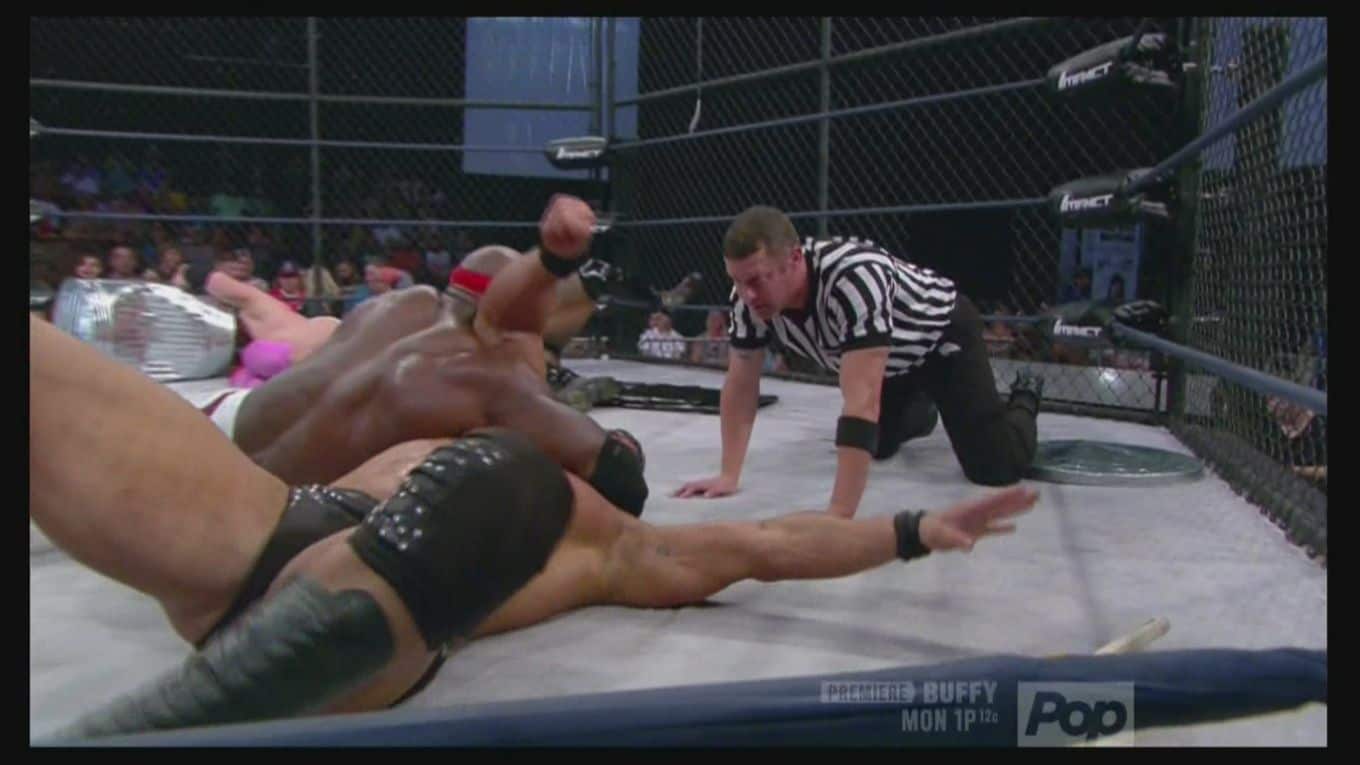