Last week’s main event is recapped before Josh hypes up MONUMENTAL NEWS for tonight. Pope says they’ve got great action tonight – the DCC faces Decay and the Hardys face The Wolves. Jeff howls and says that the Wolves Nation is no match for Imag-I-Nation. EC3’s loss at the ONO PPV is recapped before he chats with some fans. Lashley comes out and tells him to shut up because his pride cost him the title. Lashley challenges EC3 for a last man standing match – but they brawl before it can be made official. Josh says this is a fast and furious start because…of course SOMETHING on every single show needs to be described as “fast and furious”.

An unseen match maker makes the match and EC3 punches a chair out of Lashley’s hands. They fight on the floor to send one of them through a table – but Lashley avoids that and powerslams him on the floor. EC3 gets up, sends him down and sets up a pair of tables. EC3 sets up a Stinger splash and hits that along with a sloppy flapjack. EC3 hits another corner splash and puts him up top and hits a superplex. Lashley gets up and takes EC3 down with a superplex of his own. EC3 gets up at 6 and eats a spear. 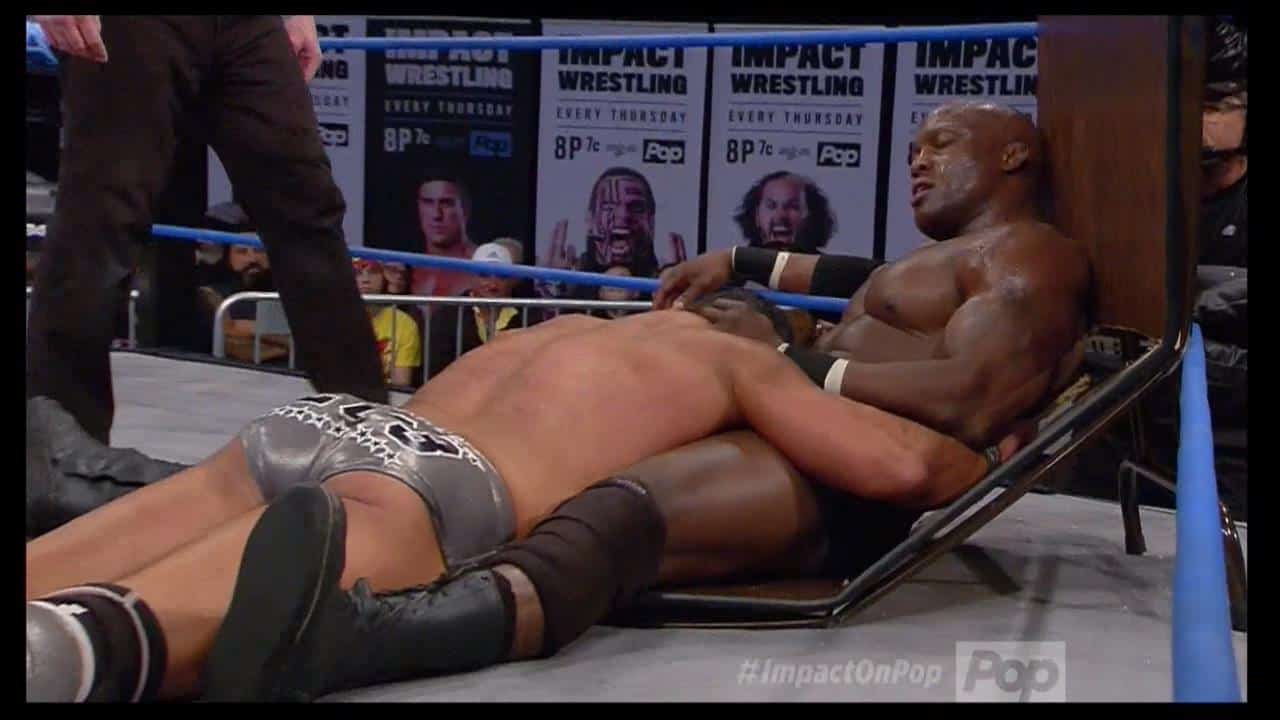 EC3 gets up, so Lashley sets up a table in the corner. A sick Ron Simmons-esque spinebuster hits EC3 mid-ring. Lashley tries to spear him through the table, but EC3 moves and Lashley stops short – resulting in him eating a One Percenter and a spear through the table from EC3. Lashley gets “up” at 9 because he rolled to the floor and landed on his feet. EC3 beats the daylights out of him on the floor with a chair. Lashley gets up and they fight on the apron, where an EC3 RNC is met with a toss and they go sailing through the tables. Lashley uses the table he went through to get up and is now the number one contender – this was a darn fine match. Someone is shown putting on rings.

Next week’s show is named Race for the Case and will lead to an Open Fight Night in two weeks. Eli and Tyrus threaten someone and force him to talk. He makes a guy read his verbiage, and he sounds horrible. Eli refuses to speak to the fans, so Tyrus will talk for him. Rockstar Spud comes out in a wacky outfit to introduce the sole reason that God gave everyone eyesight – Aron Rex! Rex has a new mink and rings – so he was the one putting the rings on before.

Spud’s powder blue getup is hilarious. Rex has lipstick on as well and his name is now so good that it can’t be spoken – only sung. Rex is doing a pompous fop gimmick and going for an ’80s wrestling gay gimmick, coming off a bit like a low-rent Liberace. Rex says that people have paid to see him – but no one has ever paid to see him wrestle. Well, he’s not wrong. He says that they paid to just see him and then he says he has to lose the jacket – it’s hotter than Mariah Carey on new year’s eve. So now he’s basically just doing Liberace’s Vegas show intro, but as a gimmick. Needs more piano-frosting cakes and a piano-inspired pools though.

Spud takes his jacket off revealing flesh-colored trunks before Robbie says that this is ridiculous. Robbie points out how much Spud has lost – so Rex covers his ears. At least they have solid comedic chemistry together. Robbie brawls, but eats a ring-covered punch and is knocked out. Rex says that violence doesn’t solve anything before the DCC complains and Kingston says he’s tired of being told “he can’t play the game”. Aren’t these guys hackers? Why are they complaining? Storm was intense and generally good, but Kingston just drags this whole group down badly. Maria acts snotty to Allie and makes her carry her fur even though Allie’s a vegan.

Decay comes out to face the DCC while Josh talks about the DCC wanting to make headlines – so they took out Decay. This is seemingly heel vs. heel, with Decay at least being the kinda-cool heels. Josh talks about how bitter Kingston is on social media without citing anything. They engage in fairly boring action while Kingston overacts on everything – although at least it somewhat fits when Steve is biting his hand. Abyss comes in and runs wild. Well, walks intensely wild – so I think Decay are officially the faces here. They fight on the floor and they fight to either a double countout or a DQ due to Storm hitting Abyss with a water bottle. Storm goes after Rosemary – so Decay are officially the faces. Kingston tells the camera guy to move or he’ll spit at the camera. Wow, what a lame threat. They brawl all over and then it just ends.

Eddie talks to Davey and says their first match back is for their tag titles. Davey apologizes for coming in last week and he says he’s so proud of everything…and all he did without him. A generic blonde woman chats with Brooke, who talks about leaving to start a family. Brooke looks forward to seeing herself face all of the new wrestlers in the division and she’ll return next week. Maria and Bennett come out so Bennett can face Braxton Sutter. They have a perfectly fine, nothing match before Bennett lands a piledriver after Maria says it’s time to “FINISH HIM!”. She demands one more piledriver, but Allie comes down and Maria forces her to watch the piledriver. Sutter jackknifes him and wins. Bennett complains and Maria says she has a plan.

Rosemary comes out doing her zombie shuffle looking awesome before speaking spooky, scary words. So maybe she’s not a face. Jade wants a shot and Rosemary obliges so she can make her suffer. Rosemary wants a monster’s ball match, which gets a yes chant. Jade is down with that, and they engage in bad, sloppy brawling. Josh hypes up Race for the Case by listing wrestlers and not really what it will be – despite this being a pre-taped show.

The Wolves come out before the Hardys get their piano intro. The Wolves get an early lead with some nice double team offense before Broken Matt comes in and Josh calls it his playground. Poetry in Motion hits in the corner and gets 2. Jeff hits Whisper in the Wind on both Wolves. Eddie sends Matt into Jeff in the corner to avoid a Twist, but a swanton is met with knees. Davey wants to hit their suplex/kick combo, but Eddie dives to Matt and Davey gets cradled and loses. Davey is pissed and the show ends. Well, that was abrupt.