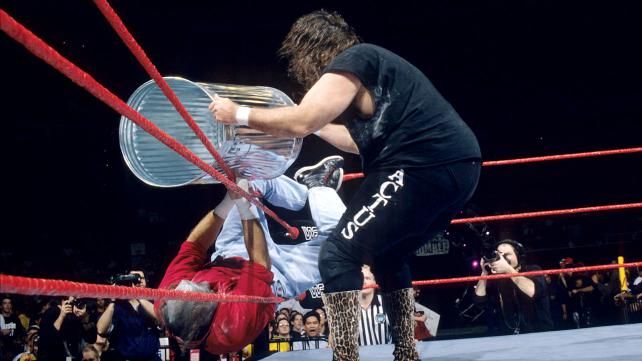 – Your hosts are JR & The King

– Opening match: The Artist Formerly Known as Goldust v. Vader. This was during Goldust’s incredibly weird mid-life crisis period. Vader gets a quick start and draws good face heat. Vader pounds on him on the floor, then back in the ring. A low blow turns the tide, but he makes the mistake of kissing Vader and gets clotheslined out of his boots. He goes for the Vaderbomb, but yet another low blow blocks that. Vader runs through the finishing sequence again, and now Luna runs in to help, so Vader carries her on his shoulders and delivers the Vaderbomb with her on his back for the pin at 7:50. Bad match. Ã‚Â½*

– Steve Austin arrives, and the Godwinns track him down.

– Battallion, Tarantula & El Torrito v. Max Mini, Nova & Mosaic. Tammy the Crack Whore is the special referee. Standard over-choreographed minis match, which as usual holds zero interest for me. Or the crowd, either. I swear to god there are 25 variations on the Mexican armdrag used here. Lawler’s staggering array of short jokes is in fine form here, and JR even gets a zinger in: “Sunny and Max may be an item Ã¢â‚¬â€œ I hear she likes short guys!” Max cradles Torrito at 7:47 for the pin. I don’t rate midget matches.

– The Nation of Domination seeks out Austin.

– Intercontinental title match: The Rock v. Ken Shamrock. I miss the old belt. Shamrock plowed through the Nation to set this up. Long stall session to start. Shamrock goes for a rana and gets dropped on the top rope for two. Slugfest, and Shamrock comes back with a bodypress and fisherman’s suplex for two. Rock hits the floatover DDT for two, however, and into the chinlock. Shamrock reverses another DDT into a Northern lights suplex. He comes back and snaps, but the Nation runs in. Rock uses brass knuckles (what is this, Stampede?) for two, but sneaks them into Shamrock’s tights before covering. Shamrock recovers and hits the belly-to-belly for the pin and the title at 10:55. Crowd goes loopy, but the ref finds the knuckes and reverses the decision. Bad finish. *1/2

– World tag team title match: The New Age Outlaws v. The Legion of Doom. In the last match, Jim Ross was talking about showcasing young athletes rather than the senior circuit. And now, one match later, we’re showcasing “timeless legends”. I wonder if that stroke was caused by the force of his stance whipping around 180 degrees like that? The Outlaws have no singalong intro or pop. Brawl to start. LOD beats on Road Dogg for a while, then Billy Gunn. Animal ventures outside and gets sent to the steps. Dogg finds a pair of cuffs and attaches Hawk to the ringpost. Animal still won’t sell, as he fights off the champs. Gunn gets powerslammed coming off the top and Dogg uses a chair to break it up for the DQ at 7:54. What a pile of shit that was. DUD The OLD’s heat was gone by then.

– Royal Rumble: Cactus Jack gets #1, Terry Funk gets #2. Dueling chairs starts us off, and they willingly exchange chairshots on each other. Tom Brandi is #3, and suddenly Mick and Terry unite to toss him. Back to fighting. Rock is #4, and he goes after both. He gets a trash can to the head as a reward. Mosh is #5. He goes for Funk, Jack takes Rock. PIG is #6. These so-called 2-minute periods are closer to 90 seconds. Fast-running clocks have ATTITUDE, I guess. 8-Ball is #7. Cactus charges Funk and goes over the top. Bradshaw is #8 during his Blackjack phase. It’s JTTS hell right now. Owen Hart is #9, but NWA North American Champion Aztec Warrior Jeff Jarrett attacks him and lays him out. He never makes it to the ring. Steve Blackman (pre-waxing) is #10. D-Lo Brown is #11. Rock and D-Lo come to blows. Kurrgan is #12. Mosh is gone. Marc Mero is #13. Kurrgan tosses Blackman. Shamrock is #14 and everyone gangs up and eliminates Kurrgan. Rock hits a People’s Elbow on Funk to zero reaction. Thrasher is #15. Mankind is #16. He goes after Funk and eliminates him. TAFKA Goldust is #17. Rock & Shamrock continue their brawl. Goldust puts Mankind out. NWA North American Champion Aztec Warrior Jeff Jarrett is #18. Owen Hart rushes the ring and joins the match, tossing Jarrett. Honky Tonk Man is #19, taking the injured HHH’s place. Rock tosses Shamrock. HHH hobbles to ringside and breaks a crutch over Owen to eliminate him. Ahmed Johnson is #20. Mark Henry is #21. He goes right after Ahmed, prompting JR’s unintentional Line of the Night: “Mark Henry is handling the big Johnson ” #22 passes with no entrant. The announcers speculate that it’s Austin, but sharp-eyed viewers will remember that Skull got beat up earlier in the show. Ahmed is gone, as is Phineas. The Nation keeps fighting amongst themselves. Kama (the Godfather) is #23. Zzzzzz. Steve Austin is #24, and everyone stop to wait for him. He comes from the crowd, tossing Mero & 8-Ball. HOG is #25. Now Rock & Kama go at it. Savio Vega is #26, as all the Boriquas attack Austin. They leave shortly after. Faarooq is #27. The entire Nation is now in the ring. Faarooq goes after all of them. Rock & Austin go through the ropes and brawl on the floor. Dude Love is #28, making his third appearance. He dumps Bradshaw. Rock & Austin return to the ring and continue their private war. Chainz is #29, Vader is #30. Vader kills Goldust and tosses Honky. Austin backdrops Thrasher out, then Kama. He tosses Savio. Goldust clotheslines Vader out. Godwinn charges Dude and he’s gone. Goldust follows. Austin dumps Chainz. Rock tosses Henry and D-Lo, leaving

– The Final Four: Austin, Dude, Faarooq & Rocky. The faces dominate, but Austin turns on Dude and Faarooq eliminates him. Faarooq then goes after Austin, but Rocky sneaks up from behind and dumps Faarooq. That leaves Rock v. Austin, which ends quickly via Stone Cold Stunner at 55:30 to send Austin to Wrestlemania and history. Too many people in the ring for the whole match made this a very subpar Rumble. **

– Michael Cole interviews Mike Tyson in the skyboxes, and wouldn’t you know that he’s a big fan of “Cold Stoned” Steve Austin.

– WWF title, casket match: Shawn Michaels v. The Undertaker. Shawn uses speed to avoid UT, but gets caught and manhandled. Shawn takes a nasty bump over the top, hitting his back on the casket, and that ended up being the move that ended his career. Back in and Taker gets the ropewalk and dumps Shawn again. He puts Shawn into the casket, but can’t get the lid shut. Shawn tosses powder in UT’s eyes to come back. They fight out of the ring again. Shawn piledrives him on the steps and HHH antagonizes him further. Shawn rolls him into the casket, but he comes back. Shawn hits the flying forearm and flying elbow, then Sweet Chin Music to KO the Undertaker. He rolls UT into the casket, but stops to showboat and gets hit in the nuts. UT unleashes some righteous whupass, but misses a dive and lands in the casket. Shawn follows him down with an elbow into the casket, and they’re both in. UT bursts out, drags Shawn back in the ring, and hits a MONSTER chokeslam. UT brings him to the apron and tombstones him into the casket, but the NAO & Boriquas attack. Crowd chants “We want Kane” (Kane and UT “reunited” the week previous) and Kane obliges. Crowd is going nuts. Kane clears the ring and DX helps Shawn out of the casket. Kane suddenly attacks Taker, and chokeslams him into the casket for the loss at 20:33. No Hell in a Cell or anything, but still pretty god. ***1/2 Kane pushes the casket away from the ring, smashes it, and lights it on fire. UT returned a month or so later, and man was he PISSED

The Bottom Line: This show is generally regarded as the turning point for the WWF as they mounted a comeback against WCW, but the show itself pretty much blows. Probably worth a rental for Rumble fans and the good UT v. Shawn match, but there’s much better Rumbles and much better Shawn matches out there, so don’t knock yourself out looking for it.