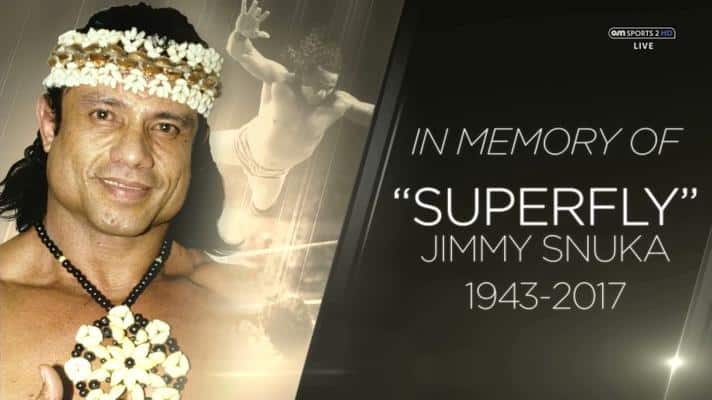 A Jimmy Snuka graphic airs before a Martin Luther King Jr. video package airs dedicated to him and many significant African-Americans since him. Roman talks about Jericho being locked in a cage above the ring at the Rumble and that not only can KO not beat him – but no one in the world can beat him one-on-one. That gets him booed heavily and then he says he’ll main event his third WrestleMania. Paul Heyman talks about Brock a bit before Roman says Brock must be eating or sleeping if he’s not here.

KO and Jericho comes out with their belts and declare themselves co-champions for both titles. KO says he’ll be champion after the Rumble before Seth comes out, then Braun, Brock, and Sami. A brawl breaks out with Braun eating a Superman punch, Seth’s knee, and a helluva kick. Everyone eats suplexes from Brock before he stares Sami down. Big delayed German to Sami! He stares down Braun, but Roman jumps Brock, who F5s Roman.

Taker’s return to Raw is shown and then the UK Title Tournament is recapped. We see Sasha get jumped by Nia while training in the ring earlier. The Club comes out to face Cesaro and Sheamus. Cesaro shines with a lot of flips and kip ups. SWISS-19 hits and then he dives onto Gallows on the floor. Springboard European uppercut hits for 2, while an Anderson spinebuster gets 2. Sheamus decks the ref and they hit a Magic Killer on Cesaro that gives The Club the titles for about half a second before the original ref then waves it off for the punch. The first ref woke up way too quickly here for this to not come off as a ripoff.

The opening segment is recapped before a Snuka video airs. The Superfly dive remains absolutely gorgeous – he was silky-smooth with it. Emmalina is still coming soon. Sami chats with Roman and Seth and wants to do the Shield hand bit, but they just wave it off. Okay, well then he’s a dork. Swann and Nese are out for a match – but Neville comes down and a three-way brawl erupts. Swann is left laying and Neville cuts an intense promo.

New Day comes out and passes out cereal to the fans. They chat for a thousand years before Titus comes out to kill time and he wants to face Big E for a Rumble spot. E smacks Titus’s ass during an abdominal stretch. Titus hits a Dominator and then smacks E’s ass during an abdominal stretch. Big splash and the Big Ending finish it. A Royal Rumble ad airs and then one on MLK.

Charlotte comes out and we get shots of Bayley as a fan with Ivory and RVD before showing her poem as a kid. And while Bayley was making a poem, she was training as an athlete! We see clips of a Bayley NXT video package showing her reading a poem She calls herself the franchise before Bayley comes down and cuts a fairly lame promo about not being ashamed. She says that she’ll defeat her at the Rumble and break her streak before rapping a bit. All right – this got better.

KO and Jericho suck up to Braun, who has none of it and says he’ll win the Rumble and win the Universal Title. Kendrick comes down to face Cedric, whose issues with Alicia are recapped. Captain’s Hook is locked on, but Alicia gives him a chance to grab the rope. Lumber Check gets the win for Cedric, who feels like even with this, he has no real momentum. Nia insults Sasha and Alicia tells someone that she doesn’t want to talk about the Cedric stuff – well, yells is more like it.

Kurt Angle’s Hall of Fame induction announcement is made. The main event six man tag is nothing special, with intros lasting quite some time. Seth’s flying knee gets 2 on Jericho. Seth dives on KO and Jericho before Sami dives on Braun for 2. Running powerslam gets the win for Braun, who I like is bringing back Davey Boy’s powerslam as a finisher instead of just a transitional move. He goes to take out Sami near the announce area, but Seth and Roman make a save. KO and Jericho brawl with him before Owens powerbombs him through the announce table.