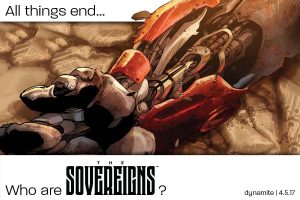 The Golden Age Has Come To An End.

WHO ARE THE SOVEREIGNS? 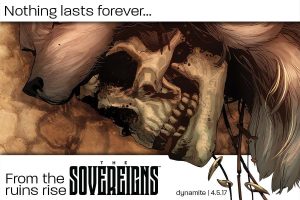 January 24, 2017, Mt. Laurel, NJ: Dynamite Entertainment has published some of the most celebrated stories in the long history of the Turok, Solar, Magnus, and Doctor Spektor publications. Now, the publisher will introduce a new era for these long-running comic book staples with The Sovereigns #0, the oversized 48-page launch issue priced at $1.00 retail as the perfect jumping-on point for new readers! 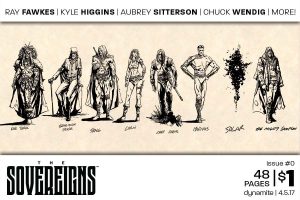 The Sovereigns #0 is the beginning of an epic tale that will change everything you know about some of comicdom’s greatest and longest-tenured heroes! Apart, they’ve saved countless lives in hundreds of world-shattering conflicts. Together, they form a team that has protected the world in the past, present and future. Now, they will be reunited one last time to face a threat that will forever change their legacy and bring them face to face with their final destiny!

Writer Ray Fawkes says, “The Sovereigns is the story of all the legendary Gold Key characters at the apex of their careers as heroes — and at their moment of greatest crisis. It all begins and ends with Turok, King of the Lost Valley. It turns out his life and his kingdom are more important to the survival of the world than everybody knew.” 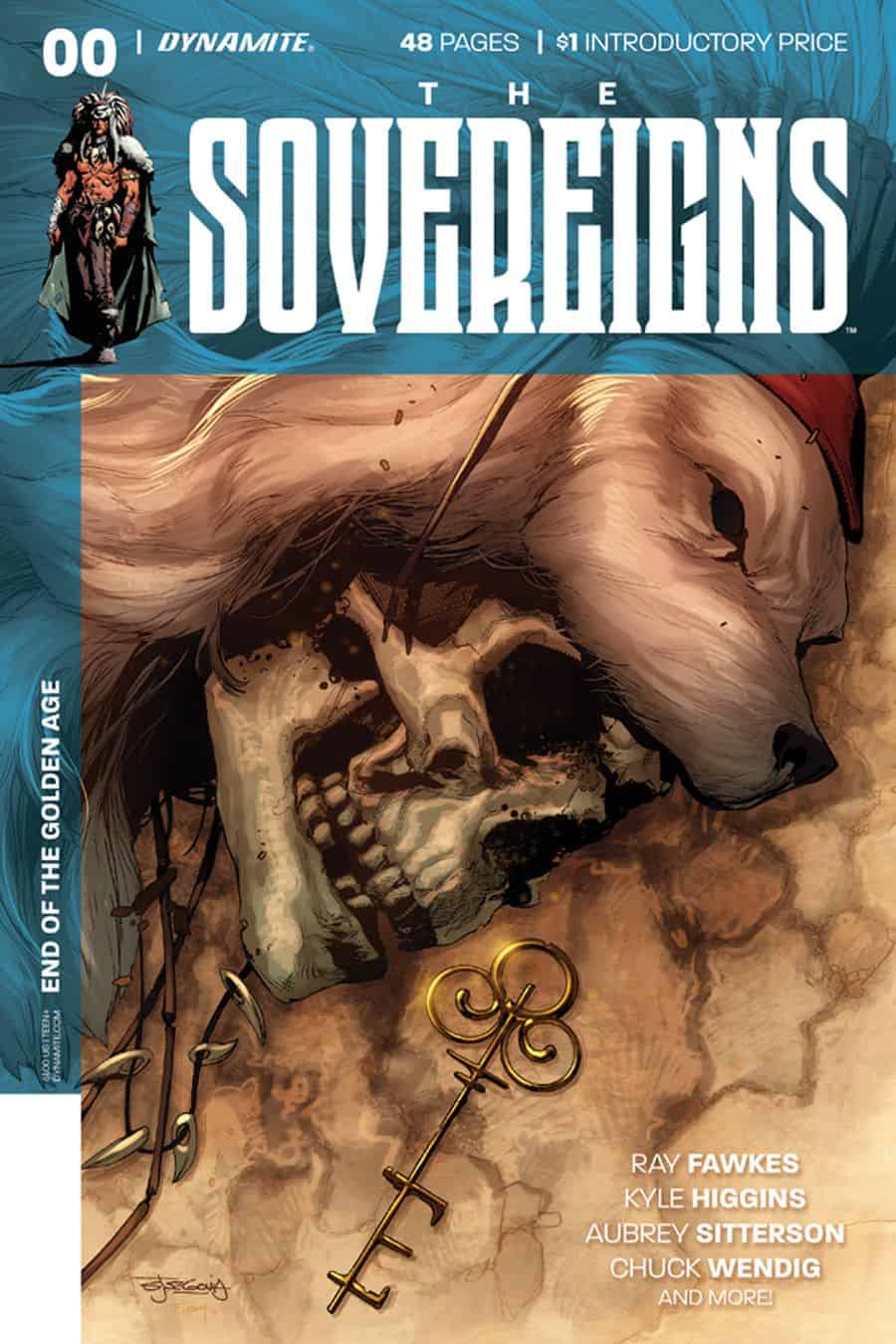 “Sovereigns is everything I love about comics,” says Senior Editor Matt Idelson. “A huge, cosmic threat; heroes with incredible humanity yet differing from one another through their all-to-human quirks; and telling a story that both honors the rich history of some truly great characters while building something that first-time readers can enjoy is incredibly satisfying for me. Ray and Johnny are doing work you’re destined to slobber over.”

“The Turok you expect won’t necessarily be the Turok you expect. We’re taking the character in a different direction, and boy howdy, I think we’re going to drag him through Hell along the way,” says Chuck Wendig. “Getting to take an old character for a new spin is always a fun challenge, and Turok in particular, allows us to go gonzo – I think this is a story world ripe for action, adventure, and spectacular weirdness. This is not what came before, but the spirit of the character and the world remains. My goal is to bring in new fans, but also satisfy those who came before.” 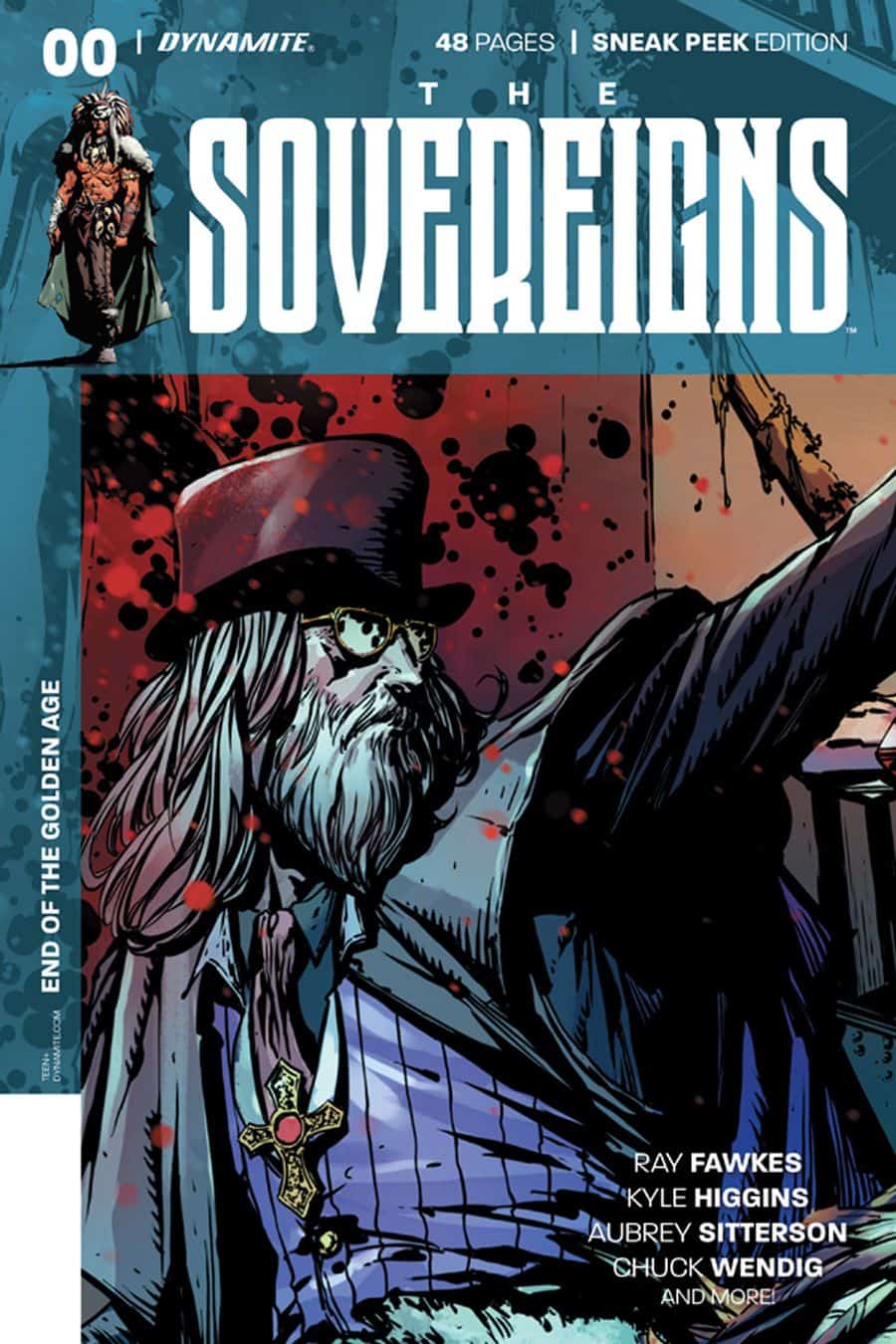 “Doc Spektor is back and he’s younger, scuzzier and more self-destructive than ever before” says writer Aubrey Sitterson. “You’re going to see Doc banish malevolent spirits, tangle with subway shoggoths, attend rooftop parties with clans of warring fairies, summon demons and, most challenging of all, try to win back his fed-up girlfriend while sharing an apartment with a monstrous roommate. It’s more heavy metal than goth, and it’s the brutal, fun, soap operatic occult comic you’ve been waiting for.”

Writer Kyle Higgins says, “Magnus is a character with a rich history, and a premise that’s an absolute blast – how do you not love a guy who fights futuristic robots? When I’m looking at whether or not write an established character, the number one thing for me is how far we’re able to push things. Can we find an interesting, unique way in? Can we do something different with the concept, while still staying respectful to what’s come before? Dynamite has been tremendous in giving me a massive runway to flip things on their head and turn this into a book that’s very, very different. I’m having a blast, and can’t wait for people to see what the idea of a ‘robot fighter’ looks like in 2017.”

“When we first launched the Gold Key characters at Dynamite, we brought together some of the most talented writers and artists in the industry to set our interpretations apart,” says Dynamite CEO and Publisher, Nick Barrucci. “Now with The Sovereigns, we have done it again, to introduce something unlike anything that has ever come before. We are working with four incredible writers that we have never worked with before to build this new world, and have such incredible faith in the series that we’re launching it at the introductory price of $1.00 for 48 pages to ensure we can get the series into the most hands possible via retailers!” 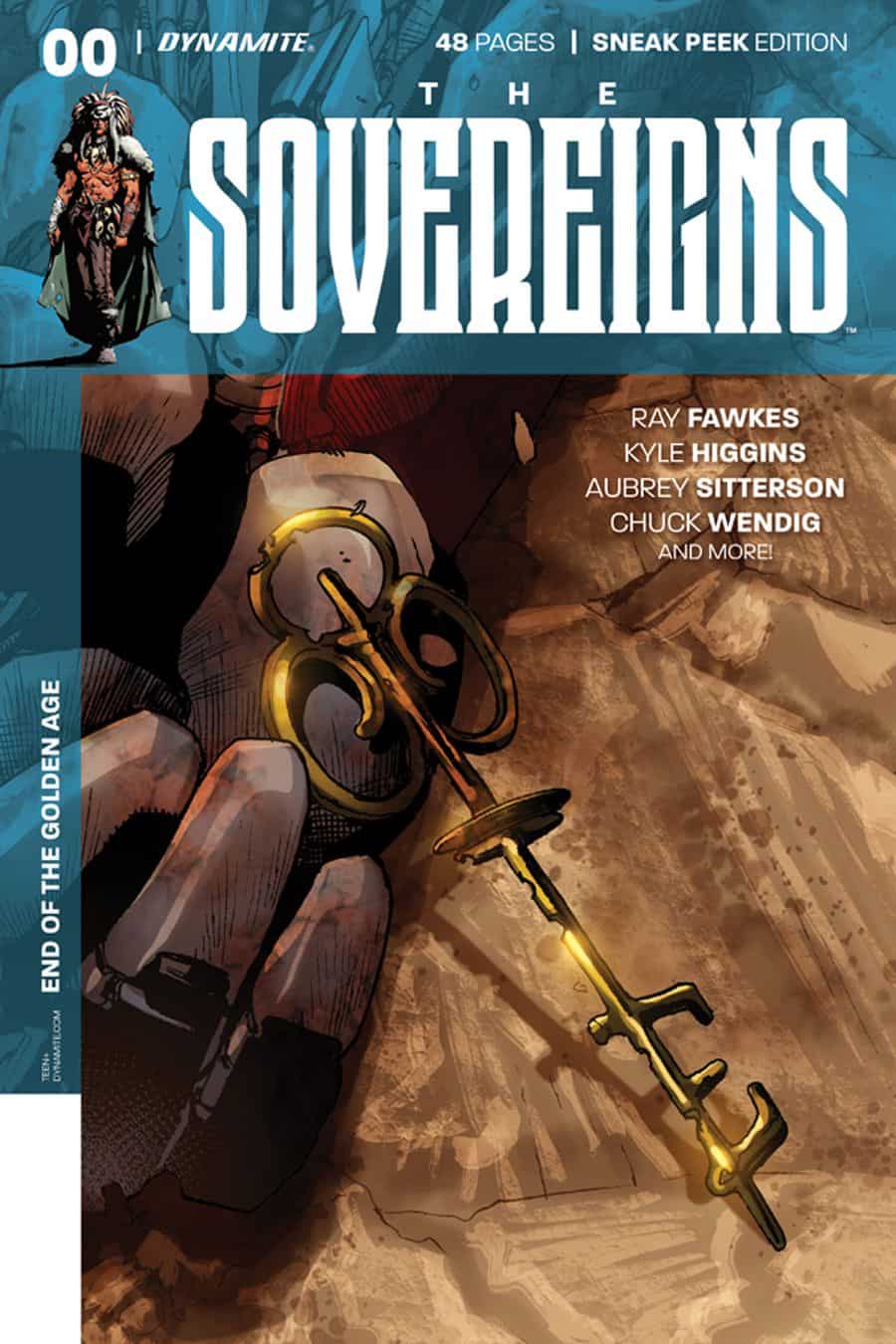 The dramatic cover artwork to The Sovereigns #0 will be provided by the talented Stephen Segovia (Titans). Three special “Sneak Peek” variant covers are available as retailer incentives, including artwork by Desjardins, Segovia, and Philip Tan (Suicide Squad), respectively.

The Sovereigns will be solicited in Diamond Comic Distributors’ February 2017 Previews catalog, the premier source of merchandise for the comic book specialty market, and slated for release in April. Comic book fans are encouraged to reserve copies with their local comic book retailers. The Sovereigns will also be available for individual customer purchase through digital platforms courtesy of Comixology, Dynamite Digital, iVerse, and Dark Horse Digital. 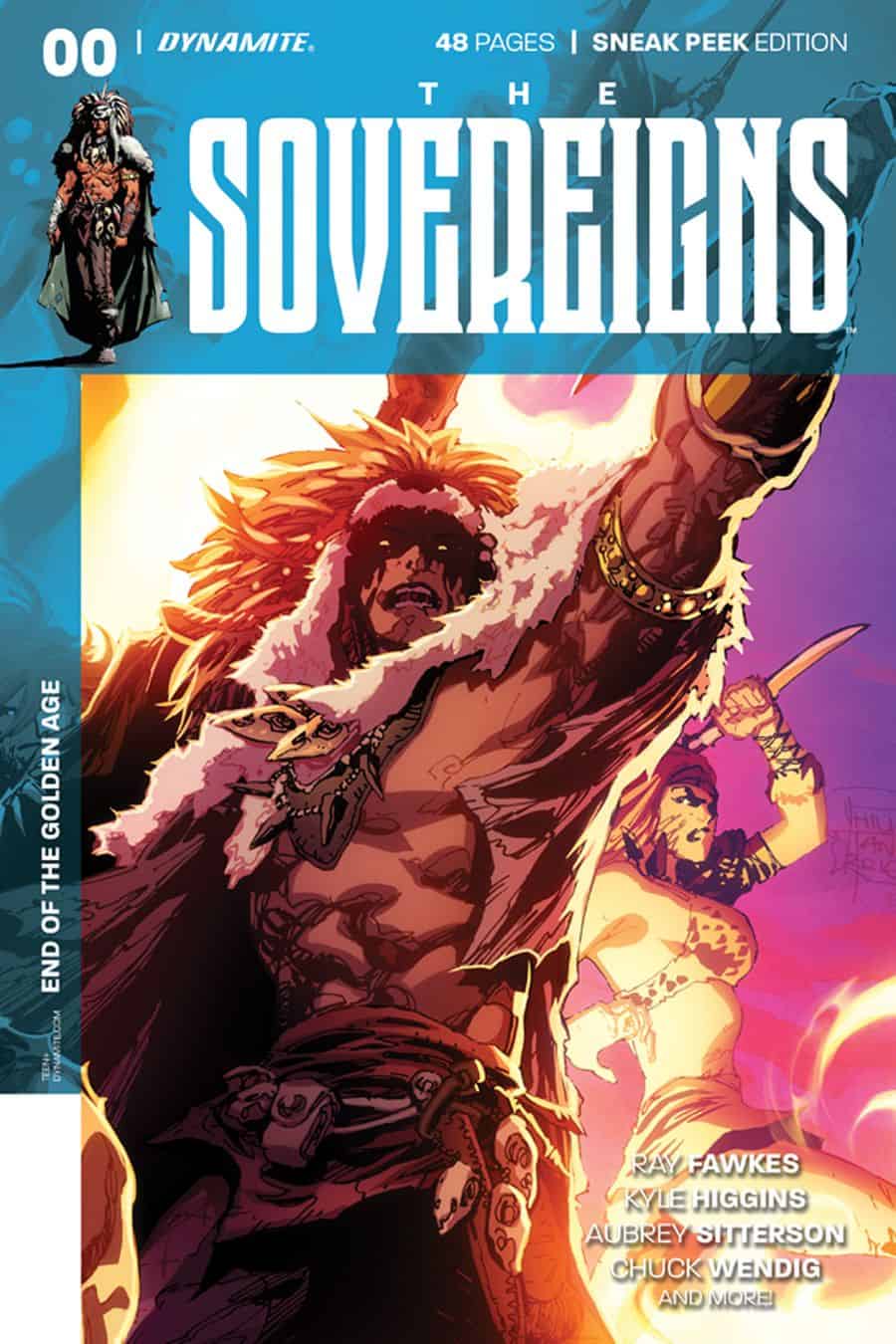 Dynamite was founded in 2004 and is home to several best-selling comic book titles and properties, including The Boys, The Shadow, Red Sonja, Warlord of Mars, Bionic Man, A Game of Thrones, and more.  Dynamite owns and controls an extensive library with over 3,000 characters (which includes the Harris Comics and Chaos Comics properties), such as Vampirella, Pantha, Evil Ernie, Smiley the Psychotic Button, Chastity, and Peter Cannon: Thunderbolt.  In addition to their critically-acclaimed titles and bestselling comics, Dynamite works with some of the most high profile creators in comics and entertainment, including Kevin Smith, Alex Ross, Neil Gaiman, Andy Diggle, John Cassaday, Garth Ennis, Jae Lee, Marc Guggenheim, Mike Carey, Jim Krueger, Greg Pak, Brett Matthews, Matt Wagner, Gail Simone, Steve Niles, James Robinson, and a host of up-and-coming new talent.  Dynamite is consistently ranked in the upper tiers of comic book publishers and several of their titles – including Alex Ross and Jim Krueger’s Project Superpowers – have debuted in the Top Ten lists produced by Diamond Comics Distributors.  In 2005, Diamond awarded the company a GEM award for Best New Publisher and another GEM in 2006 for Comics Publisher of the Year (under 5%) and again in 2011.  The company has also been nominated for and won several industry awards, including the prestigious Harvey and Eisner Awards.