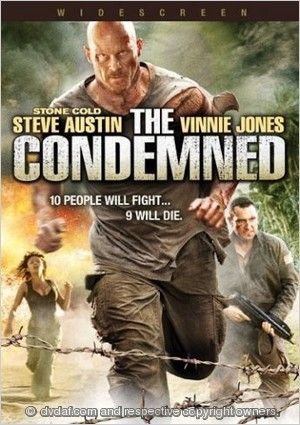 It’s a little surprising that it took over four years after the end of his wrestling career for “Stone Cold” Steve Austin to headline a motion picture. After all, he was one of the biggest superstars in the history of World Wrestling Entertainment, a man who drew millions upon millions of dollars while becoming a pop culture icon during wrestling’s biggest boom period.

But here it is, his first starring role in all its glory. Austin plays Jack Conrad, a death row inmate in a Central American prison. When a wealthy megalomaniac named Breckel (Robert Mammone) devises a television program in which 10 inmates will fight for the right to freedom, leaving nine dead bodies in their wake. But since no network in their right mind would touch such a thing, Breckel decides to stream it live over the internet, which was still a pretty novel idea in 2007.

A movie like “The Condemned” is not built on the suspense of who will walk away the winner, but on the brutality and ingenuity of its fight scenes. In this regard, director Scott Wiper and his team do a pretty respectable job. The fisticuffs are well presented, and even though the amount of punishment everyone endures is inhuman, it progresses nicely up to the final battle between Conrad and McStarley (Vinnie Jones).

The script by Wiper, along with Rob and Andy Hedden, is mostly grunts and clichés, and that’s actually a disappointing aspect of this movie. While it was never intended to be an Oscar-winning masterpiece, Austin rose to fame with his gift of gab, and that natural gift is stifled by a role that only asks for little more than the occasional quip in between face punches.

With a more compelling lead character, “The Condemned” could have risen above adequate. But putting the handcuffs on Austin did the leading man no favors and it ends up a passable albeit forgettable film.