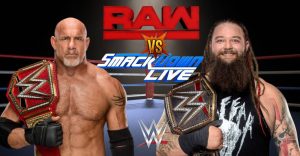 With Wrestlemania this weekend, and the festivities of the week are very much underway. As I sit writing this on a bus in rainy Scotland I certainly wish I could be in Orlando experiencing the whole week. Nonetheless, I am very excited for all of the different shows in the next few days, but most importantly I am very much ready for Wrestlemania itself. I felt both shows had effective but not necessarily exciting go home episodes – as generally they are before a Wrestlemania. We already know what the matches will be, we already know the reasons for those matches etc. The purpose of these shows are not to have lots of surprises or to have the most exciting show in the world – it’s to tie everything up in a bow and present “Here is what you can expect on Sunday” and those shows did that.

As much as a lot of people won’t agree, I think it would be the wrong decision to do anything other than having Roman Reigns beat the Undertaker at Wrestlemania. If it was anyone but Roman in this position, most people would agree.  Roman is going to be around  for a lot longer than the Undertaker, and the Undertaker has absolutely no need to beat Roman, he doesn’t need it. I think the quality of the match will 100% be down to whatever condition the Undertaker is in. If he’s in the condition to do his normal stuff, and can be out there for a decent amount of time I’m sure they will have a fantastic match. I really enjoyed seeing Reigns on the microphone this week because it felt like there was all kinds of comfortability there and I felt we almost saw a side of Roman we haven’t seen before – it even almost felt as though I saw shades of the Rock shining through.

If you’re a regular reader of these articles you will remember me saying that one of my wishes for the Bray Wyatt and Randy Orton build up was I was hoping for no extraordinary stuff. Well, we actually got a lot of that type of thing. I’m not the biggest fan of any type of “magic” going on in my wrestling (or at least not in the world of WWE, Lucha Underground is a different story) so honestly my engagement with this storyline has died down in the last few weeks. Having said that, I know these two guys are going to have a great match – even if it would get a bigger reaction and maybe cause more memoires if it wasn’t on such a packed show. I am 100% hopeful that Luke Harper and maybe even Eric Rowan get involved with the match, all the bells and whistles and shenanigans added in will be even better. In terms of the result of this match I’m not necessarily concerned either way, although in the contrary for another Smackdown match, I will be incredibly disappointed if AJ Styles loses to Shane McMahon. As similarly to the Roman Reigns point I made earlier, Shane does not need to beat AJ and actually I think in this case AJ could do with the win even more than Roman does in his match.

There are plenty of rumours going around concerning who could be thrown into the mix in the Smackdown Women’s title match this Sunday. Personally I feel like this could be important as while Raw’s women’s division in my opinion needs a bit of a shake-up in order to give it more depth, the Smackdown’s women’s division has been running pretty smoothly as seems to still have some decent depth. Coming into the fallout from Wrestlemania I’d like to see Bayley retain, to be challenged by a returning Emma. I’d also like to see Summer Rae return to the Raw brand as a fan favourite and of course feel a massive addition to the Raw roster would be Asuka. So my final verdict would be that I’d like to see Bayley retain at Wrestlemania, with Naomi winning on the Smackdown side, allowing them to resume whatever they would have been planning with her before her injury – also allowing the hometown girl a big win. Smackdown’s roster would generally stay the same, with Emma, Summer Rae and Asuka joining onto the Raw roster.

Speaking of NXT wrestlers coming onto either the Raw or Smackdown brands post Wrestlemania, I certainly have one or two wishes for some movement from the NXT brand. Of course additionally to Asuka, I feel NXT’s Japanese continuant might be becoming shorter soon after Wrestlemania. I’d love to see Nakamura on either roster, but I of course have my own personal preference. Many are saying they’d like to see The King of Strong Style on the Raw roster. However, with Finn Balor set to return, Samoa Joe having recently come to the roster and it looking likely the likes of Brock Lesnar and Triple H will be around after Wrestlemania – meaning Raw will not be too short on star power. Meanwhile, Smackdown, while having some fantastic members of their roster, probably have less depth. Of course they’ll have Randy Orton, Bray Wyatt and AJ Styles but apart from that, most other guys are John Cena – who is apparently set to go work on other projects soon after Sunday – or the likes of Baron Corbin, Dean Ambrose, The Miz, Dolph Ziggler and Luke Harper – great members of the roster, but not the types who the WWE have thrown their machine behind like the other three I mentioned. So Nakamura would be highly welcome on that roster – and I’m sure no one will complain about getting AJ Styles Vs Nakamura. The final two guys I’d like to see make the move from NXT, is the Revival, and I’d again place them on the Smackdown roster, due to its equal lack of depth and teams  the WWE seem prepared to get behind. Plus I think as a team they’d work excellently with American Alpha, who we’ve seen them work with before, and the Uso’s.

I’ll finally talk about the match I’ve found myself most excited about – Seth Rollins Vs Triple H. Yes, while some may look at this match with little interest, this one has me excited. Some may disagree but I believe Triple H consistently delivers on the biggest stage and Seth Rollins is more than capable of being his opponent on that stage. Rollins has had in many minds a small struggle with coming to terms with his fan favourite character after playing such an effective villain. However, if anyone can help him get there, Triple H is a good choice. I’ve really enjoyed the build up to this match – when you look at the build-up in some of the matches I’ve not enjoyed so much, they basically do everything that this build hasn’t. This build has felt real, it’s felt gritty and it has felt aggressive. Nothing special, just two guys who want to fight and the added attraction of the interest around Rollins knee.

For my full predictions, you can go to the official InsidePulse prediction article. I’ll still be going strong with these articles and hopefully improving them when a new chapter starts in the WWE as soon as Wrestlemania is done and dusted. I’m sure both  Raw and Smackdown will enjoy some good viewership’s coming off of the biggest show of the year. Enjoy Wrestlemania everyone.