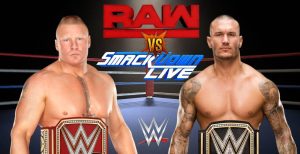 Raw this week raced out from Wrestlemania with 3,893 million viewers, up from the go home show for Raw which drew 3,426 million viewers. Smackdown also enjoyed a jump in viewership, 2,885 million viewers tuned into the blue brand, up from 2,698 million the previous week.

Unsurprisingly the viewership’s for both Raw and Smackdown went up this week. Wrestlemania had highs and lows but for the most part people enjoyed the show and in addition to that we had the return of the Hardy’s and the promise for appearances from the likes of Finn Balor and Nakamura. With a “shake up” coming up next week, there are plenty of things to be excited about in the future of both Raw and Smackdown.

The first thing to note is the new general manager on Raw. Through changing Stephanie out for Kurt Angle we’ve went from multiple segments of Stephanie aggressively talking down to the wrestlers to the same segments being directly replaced with Kurt Angle comedy segments. And with that, this show just got a whole lot easier to watch. I really do enjoy Steph when she is at her best, but unfortunately that character every single week became very boring and was not often helping the wrestlers in the segment with her. It’s fantastic to see Kurt Angle back in the WWE and a good guy authority figure is often far easier to watch week to week, and the added element of Angle being incredibly funny only help – especially because you know when he has to get serious, he’s also one of the best at that. Having said all of that, I still really do hope we get to see Angle step back inside the ring. Of course not on a regular basis but another 4-5 matches over the next few years would be fantastic. While it would be awesome to see Angle match up once again with the likes of AJ Styles and Samoa Joe, my real hope is to see him match up with guys we haven’t got to see him face before – such as Roman Reigns, Seth Rollins, Rusev and Finn Balor.

Smackdown still has a roster that has quite a few of my favourites on it, and I’m hoping that it can continue to present a similar to product to what it has provided since the draft split – although I must admit the World title match at Wrestlemania wasn’t one of my favourites on the card and part of that probably came from a lack of investment in the match on my part as I couldn’t get into much of the super natural aspects of the feud. As it looks set to continue, I hope it can ground itself a little more than it did in the lead up to Wrestlemania. The return of Eric Rowan was nice to see as I’ve always seen him as a good guy to have on the roster, although seeing him pinned in his first match back doesn’t necessarily inspire a whole lot of hope for him to be utilised any more than he was before. Having said that, I think Rowan fits the position of Bray Wyatt’s second quite well, however, I do think the Wyatt family could do with another addition come the draft split, and thankfully he’s been growing out a beard. I can only assume Bo Dallas has not yet been added to his brother’s stable, not because it would bring him down, but because they are afraid Bo’s involvement could devalue the family as a whole. However, I think it only helps Wyatt’s character to continue to persuade people to join his cult – and if a member doesn’t work out, he can destroy that member. So I’d like to see Dallas come over to Smackdown and be added to his brother Bray’s cult – even if it is just to give Randy Orton another person to RKO.

The first 15 minutes or so of Raw this week was quite surreal, and showed exactly why the WWE continues to persist with Roman Reigns. The guy gets a reaction, that’s for sure, and the WWE must be incredibly happy. Not only does Reigns get a better villainous reaction than most villains in the company – instantly getting whoever he is facing cheers – but he also according to Dave Meltzer sells a lot of merchandise like a fan favourite may do. Reigns is doing the job of two different characters and that is why he will likely continue to be a massive part of WWE programming. With the way Reigns was in this segment, during his match at Wrestlemania and in much of the build up to his match with Undertaker – I am not complaining, as he has really been entertaining me. The scenes at the beginning of Raw were quite incredible and while I agree that Reigns would be very interesting to see in the position of a villain, I can understand why the WWE don’t pull the trigger on that – as doing so would likely remove much of the passion in hating him and probably actually get him cheered. I would love to see the WWE find a way to keep Reign’s character as it is, but get him into matches with some of the more fan favourite wrestlers. This way they can benefit from facing the guy who is getting some great villainous reactions.

We’ve seen one tag team return and another debut from NXT in the past week, although what is slightly worrying about that is the fact that both of these teams have come to Raw – the tag team division that didn’t need more depth, at least in comparison to Smackdown. However, with the shake-up coming up next week, that could be a perfect way to build a little bit more depth on Smackdown. The Uso’s and American Alpha are a great starting point and while they probably won’t be serious contenders there is no reason for Breezango not to be used for their personality and to act as enhancement talent as such for some of the more serious tag teams. If you can then add even just one, but preferably two tag teams to that division, you could have a really nice bit of depth. You could even draft one tag team over and then put a tag team together with two wrestlers that maybe aren’t doing much – I’d love to see Akira Tozawa drafted over to team with Apollo Crews but alternatively you could team Crews with Kalisto. It will be interesting to see how the WWE explains drafting a whole tag team over to Smackdown and making that seem fair, as there likely won’t be Smackdown teams drafted to Raw.

I’d expect the ratings to possibly dip slightly for both shows next week, although the promise of a shake-up should manage to retain most viewers. The shake-up and the surprises that come along with it should also go a long way to making the shows more entertaining and the element of what I assume could be interactions between Kurt Angle, Shane McMahon and possibly Daniel Bryan (I’m not sure if he’s away until the birth of his child or not) could be great.