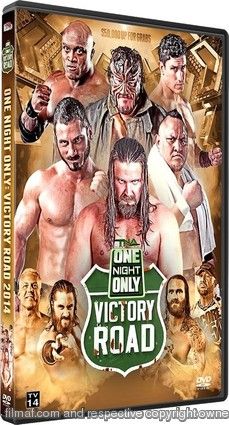 Mike Tenay and Taz are on commentary. The concept of this show is pretty simple, in that the winners in each match will go on to a gauntlet battle royal in the main event.

~MATCH #1~
Austin Aries defeats Kenny King at 10:10. These two go way back to their days in ROH, so they know each other well. Aries controls early but King uses chicanery to take over, and he begins wearing Aries down. The commentary is immediately infuriating, as Tenay and Taz goof off and cackle at each other over stuff that is NOT FUNNY GUYS. Anyway, Aries and King have a solid but unspectacular match that ends when Aries hits a Brainbuster to score the pin. Decent opener here, and the crowd reacted well to Aries so that’s a plus.
Rating: **½

~MATCH #2~
Bram defeats Davey Richards at 8:01. The brawler from Great Britain uses his power to control Richards in the early going, so Richards counteracts with his speed and agility. They trade control frequently, both men working a relatively fast pace. Bram uses the referee as a shield, and that allows him to rake the eyes, and then hit The Brighter Side of Suffering to get the pin. Another perfectly adequate match and in interesting clash of styles here.
Rating: **¾

~MATCH #3~
James Storm & Kazarian defeat The Menagerie (Knux & The Freak) at 5:52. No idea why Storm and Kazarian are teaming here. This is a pretty standard tag team formula match, with Knux and The Freak using their absurd size and power to work over their smaller opponents. Kazarian has to resort to using a beer bottle on The Freak, and Storm follows up with the Last Call to get the pin. Not really much to see here.
Rating: *¾

~MATCH #4~
Lashley defeats Samoa Joe at 7:48. These two have met before so they are definitely familiar with each other. Lashley dominates the early going, Joe fights back, stuff happens, it’s boring. Kenny King makes his way out to interfere and that distracts Joe long enough for Lashley to hit a Spear and get the pin. Neither guy looked particularly motivated here and the results were pretty blah.
Rating: **

~MATCH #5~
Abyss defeats Mr. Anderson at 7:05. These two take it right to the floor and brawl. When they make it into the ring Abyss takes control and keeps Anderson grounded. Anderson gets in a little bit of token offense but Abyss hits a Chokeslam from out of nowhere for the pin. Again, not much happening here with two mediocre talents phoning it in.
Rating: *½

~MATCH #6~
The BroMans (Jessie Godderz & Robbie E) defeat Bully Ray & Rockstar Spud at 7:28. Spud is an absolute embarrassment to his profession. His alleged “comedy” spots are not funny, no matter how much the awful commentators cackle over them. This is all shenanigans until Spud turns on Bully, allowing the BroMans to hit the BroDown to get the win. After the match Bully puts Spud through a table. This was absolute garbage in every possible way.
Rating: DUD

~MATCH #7~
Gunner defeats Magnus at 8:31. These are two pretty well matched opponents. They battle in and out of the ring, trading control back and forth. Both men are trying hard to get the crowd into it, and they succeed more than most of the other matches on the card so far. Late in the match Gunner comes off the top rope but leaps right into a foot to the face. Magnus tries a sunset flip but Gunner counters with a Bulldog Cradle to get the pin. Decent stuff here but not enough to lift this show out of the rut that it’s in.
Rating: **½

~MATCH #8~
Ethan Carter III defeats Sanada at 6:23. These two have a pretty solid back and forth contest, with EC3 trying to keep Sanada on the mat, and Sanada taking to the air every chance he gets. When Sanada misses a moonsault he lands on his feet, but he appears to tweak his knee. EC3 takes advantage, clipping the knee and then hitting the One Percenter to get the pin. This was about half of a very good match, so it was at least fun while it lasted.
Rating: **¾

~MATCH #9~
Samuel Shaw defeats Crazzy Steve at 4:00. These two try to out-weird each other, and it’s pretty much a mess. Some stuff happens and then Shaw chokes Steve out with the Kata-gatame. That was pretty much crap, but at least it was short.
Rating: ¾*

~MATCH #10~
Eddie Edwards defeats DJ Z and Tigre Uno at 9:50 in a Three Way Match. This one moves a lot faster than the previous match, as all three men are known for a dynamic style. Tenay and Taz still just cackle at each other on commentary instead of putting the wrestlers over. Everyone gets to do a dive and they work in a Tower of Doom spot. All three men do what they can to isolate one of their opponents, but Edwards does it most successfully and he’s able to trap DJ Z in a single-leg crab to get the tap-out win. This got a little sloppy at points but they all at least appeared to be trying, which is not to be overlooked on a One Night Only show.
Rating: **¾

~MATCH #11~
Gunner defeats James Storm, Bram, Jessie Godderz, Robbie E, Ethan Carter III, Abyss, Lashley, Samuel Shaw, Kazarian, Eddie Edwards, and Austin Aries at 26:00 in a Gauntlet Battle Royal. $50,000 and a shot at the TNA World Title is on the line here. Edwards is #1, which sucks for him because he was in the previous match. Aries is #2. They battle back and forth and Kazarian is #3. Robbie E follows at #4, and Shaw is #5. Lashley is #6 and business picks up a bit. He eliminates Aries, Edwards, Kazarian, and Shaw. Lashley looks ready to eliminate Robbie E, but Abyss’s music hits and he’s the #7 entrant. The two big men square off as EC3 is #8. EC3 immediately makes a big impact by joining with Robbie to eliminate Abyss and Lashley. Gunner is #9 and not much happens. Jessie is #10 and he works with his partner Robbie and EC3 to battle Gunner. Storm is #11, and the field completes with Bram at #12. EC3 tries to rally everyone to go after Bram, but the BroMans disagree and eliminate EC3 instead. Gunner tosses Robbie, Storm dumps Jessie, and Gunner eliminates Bram, leaving us with our final two. Now it’s a pinfall or submission situation for the former Tag Team Championship partners. Storm brings in a chair but it backfires, and Gunner hits the Gun Rack to get the pin. That was the usual dull battle royal/gauntlet, and the finishing sequence was far too short to elevate it any higher.
Rating: **¼

A2Z Analysiz
As is usually the case with TNA One Night Only pay-per-views, this one offers zero compelling reasons to seek it out. Even with 11 matches getting a chance, none of them even reached three stars. With the talent on the show that obviously means they’re phoning it in. It’s a Catch-22, because I can’t say I blame them for not caring, but then also, why should I?