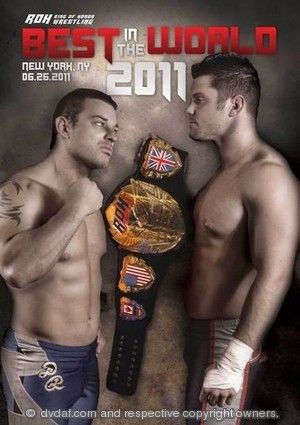 For an easy-to-search archive of all my ROH DVD reviews, visit RetROH Reviews!

This should be a ton of fun. There’s no commentary for some reason. As one might think the pace is ridiculous from the get-go, with both teams showing off their stuff. Max and Jeremy isolate on Cole until O’Reilly gets the hot tag and unleashes a series of kicks. Gen Me comes back and the match breaks down into an awesome pier-six. Unfortunately, and probably too soon, the Bravado Brothers run in from out of nowhere and attack Gen Me to give them the DQ win at 7:11. That was about as awesome of a seven minute tag team match as you are likely to see.
Rating: ***½

Ciampa is accompanied by Prince Nana and Ernesto Osiris. Cabana keeps Ciampa off balance with his unorthodox mat style in the early going. Ciampa cuts him off and starts wearing him down. Cabana makes the comeback but Ciampa cuts him off – formula stuff. Boom-Boom locks on the Billy Goat’s Curse but Ciampa gets to the ropes. Ciampa avoids the Flying Apple and hits Project Ciampa to get the pin at 6:59. Like I said, strictly formula stuff, but it worked for an opener and Ciampa looked good.
Rating: **¼

Bennett is of course accompanied by his trainer “Brutal” Bob Evans. This is Lethal’s first match in ROH since Fight of the Century in Edison, New Jersey on August 5, 2006. Lethal shows no signs of ROH rust as he controls Bennett early on, dumps him to the floor and wipes him out with a dive. Before he can get back in the ring, Brutal Bob grabs Lethal from behind and hits a backbreaker on the ring apron. Every time Lethal tries to come back, Brutal Bob steps in and interferes. Lethal perseveres though, nailing Bennett with a superkick and then putting him away with the Lethal Injection at 9:43. That was a good return for Lethal and Bennett was less annoying than usual.
Rating: **¾

Rhino, in his ROH debut, charges the ring and the fight is on. Homicide wastes no time dumping Rhino to the floor and wiping him out with the Tope Con Hilo. Ladders and tables and things all get involved, and Homicide sure doesn’t sell going through a table for very long. The crowd is hot though for the weapons, so at least they’re into it. Rhino sets up a table in the corner and goes for the Gore but Homicide leaps over him into a sunset flip to get the pin at 10:16. Nana jumps into the ring to attack Homicide right away, and the distraction gives Rhino enough time to recover and GORE Homicide through the table. That was a solid garbage brawl, and I support anytime a card has multiple styles of matches because it makes them flow easier and they are easier to review.
Rating: **½

Corino cuts a promo, thanking the fans for their support, and then he makes a plea that everyone deserves a second chance before introducing Mr. Wrestling Kevin Steen! The crowd goes ballistic for him. Officials and Jim Cornette come out to escort Steen out of the building. Jacobs tries to reason with Cornette, who will have none of it. Meanwhile, Elgin sneaks in and hits Corino with a slingshot back elbow to start the match. There is no commentary here for some reason, must have been technical difficulties. Corino tries to keep things clean and Elgin counteracts with his power. Jacobs and Truth get involved from ringside, naturally. Despite Jacobs’ encouragement, Elgin drills Corino with a powerbomb, a Buckle Bomb, and a spinning sit-out powerbomb to get the emphatic win at 8:30. That was the right match to have but not a particularly exciting one, if that makes sense.
Rating: **

After the match Elgin and Truth beat on Corino and Jacobs, who of course have no one to help them. Elgin drops Jacobs with a powerbomb, and then from out of nowhere, KEVIN STEEN runs in and makes the save! Jim Cornette does not want Steen to talk, but Corino gets the crowd to beg for it and he gets his chance. He pleads for a chance to make things right. He says “My name is Kevin Steen, and FUCK RING OF HONOR!” He then kicks Corino in the balls and hits him with the Package Piledriver! The job squad comes out to drag him out of the building. The crowd chants OLE at him. Cornette is apoplectic and says this is the last time we will ever see Steen in an ROH ring. That was seriously awesome.

Daniels has been the champion since 12.10.10 and this is his seventh defense. He’s out tonight sans Truth Martini. Generico earned this match by defeating Daniels at ROH Revolution: Canada. This is the first TV Title match since March 18, since the future of ROH on TV was uncertain until Sinclair Broadcast Group came along. Generico dominates early both in and out of the ring. Of course Daniels is able to cut him off and wear him down for a while. These two have excellent chemistry as opponents, and the crowd is really hot for all the exchanges. Generico hits an impressive coast-to-coast dropkick but Daniels is able to grab the bottom rope to break it up. They spill to the apron and Daniels is able to pitch Generico off the apron and into the guardrail. Daniels suplexes Generico on the floor as referee Todd Sinclair tries to shift the action back to the ring. Generico barely makes it back to the ring, and Daniels is wearing his belt for some reason. Daniels goes for the Best Moonsault Ever but Generico blocks it with a kick to the face. Generico follows up with the Ole Kick and then connects with the Top Rope Brainbuster to get the pin and the TV Title at 19:29. That was tremendous, with two well-matched opponents, a hot crowd and a great finish.
Rating: ****

Shelton Benjamin and Charlie Haas have been the champions since 4.1.11 and this is their second defense. The Kings are accompanied by Shane Hagadorn and Sara Del Rey, and a live performance of their entrance music. Haas and Rhett Titus start the match. The Kings and WGTT control the early goings, working on the ANX. As soon as the Briscoes get involved things go a little haywire and the action gets hard to call. The Kings calm it back down by isolating Benjamin and wearing him down. It turns into a pier-six brawl between the ANX and the Briscoes, and the upstarts are able to hit Jay with the All Night Decapitation Knee Drop to eliminate the Briscoes at 24:15. Lucky for the ANX they get a lot of time to rest as the Kings isolate Benjamin and work him over for several minutes. Surprisingly when Benjamin makes the hot tag he tags in Kenny King rather than his own partner, but since it’s an elimination match that’s not bad strategy. Soon the Kings are back in control, this time focusing on Titus and King. Del Rey distracts the referee when King and Titus hit the Powerbomb/Blockbuster Combination and Hero sneaks in and drills Titus with the Golden Elbow to eliminate the ANX at 34:31. Now we’re down to two teams, and all four men pull out all the stops to put their opponents away and emerge the champions. The champs are able to survive the Kings’ onslaught and toss Castagnoli to the floor, and then hit Hero with a double spinebuster to get the win at 40:07. I understand with the length and everything they were going for epic, but I think if they could have cut some time out of it the crowd would have stayed consistently hotter. Still, this was really good stuff and a good representation of how awesome the ROH tag team division is. After the bell, Jay and Mark Briscoe come back out and lay waste to the champions with steel chairs while Hero and Castagnoli just watch. After several minutes the ANX come racing back out to make the save.
Rating: ***¾

Edwards has been the champion since 3.19.11 and this is his fourth defense. They waste no time taking it to each other with hard strikes and submissions. Richards focuses his attack on the arm, and Edwards naturally looks for the Achilles Lock. They fight in and out of the ring, delivering big moves and stiffing the hell out of each other along the way. Edwards puts Richards through a ringside table but the challenger will not stay down. They wrestle exactly the kind of match the audience is expecting them to, and I have to give them credit for going all out with it. Richards continues using kicks, even on the apron, but Edwards ducks one and Richards kicks the ring post. It’s quickly forgotten though and Richards is throwing kicks again like nothing happened. In fact, Richards unleashes a series of kicks to the head but Edwards perseveres. Finally Richards DRILLS Edwards in the head with a running kick to keep him down for the count and become the ROH World Champion at 35:59. I’ve seen this match gets tons of praise, while my friend Kevin Ford found it vastly overrated. I actually land somewhere in the middle, where I thought it was really good and certainly delivered the kind of action they had promised in the buildup. There was a ton of “movez” and “no-selling,” and that’s what keeps it from being an elite match, but it was still a lot of fun to watch and the crowd was eating it up like crazy.
Rating: ****