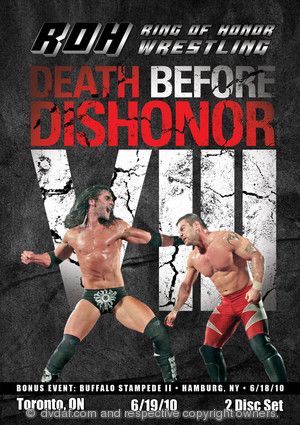 For an easy to navigate archive of my ROH reviews, just visit RetROH Reviews!

Dave Prazak and Joe Dombrowski are calling the action.

Up In Smoke starts coming out for their scheduled tag team match, but El Generico comes running out from the back and he wants to fight Kevin Steen right now! Steve Corino comes out first and says that Steen would never wrestle in the opening match but Steen disagrees and comes out for the fight! This one is intense right off the bat and the Toronto crowd is behind Generico big-time. Steen weathers Generico’s initial onslaught and starts wearing him out. Dombrowski’s commentary is pretty annoying here, I actually kind of forgot about him. Generico fights back and both men take it to each other with brutal moves throughout the match. Steen hits the Package Piledriver about 15 minutes in but Generico kicks out. He goes for the Swanton but Generico gets his knees up, and then lands two Ole Kicks. Generico goes up for the Top Rope Brainbuster but Steen bites his way out of it and “accidentally” knocks the referee down. Steen grabs a wrench and bashes Generico in the face with it and then hits a super brainbuster of his own to get the pin at 16:53. That was an awesome hate-filled brawl and a great way to kick off the show.
Rating: ****

MATCH #2: The All Night Express vs. Up In Smoke

Rhett Titus and Kenny King are without their manager Austin Aries for this important match against Cheech and Cloudy, as he is preparing to face Delirious later on. King and Titus attack during the handshake to take early control. Cheech and Cloudy stick with them and fight back, and then they settle into the tag tem formula. Dombrowski calls King the Best Pure Athlete in ROH, which always worked for Billy Gunn in the WWE. The teams go back and forth a bit and the match breaks down. King and Titus are able to trap Cloudy in the One Night Stand to get the win at 8:44. It seems like Cheech and Cloudy come and go and I’d prefer if they stuck around on a more permanent basis. This was a lot of fun.
Rating: ***

After the match, King and Titus get on the microphone to brag about their success, and then introduce their manager Austin Aries for his match against Delirious. Aries talks trash about Delirious and Daizee Haze before Delirious makes his entrance.

Delirious is in his red gear tonight, which he uses for especially heated matches. Referee Todd Sinclair ejects King and Titus from ringside before the match can start. Delirious doesn’t even freak out when the bell rings. He uses the green mist before any contact is made, giving the lizard man the early advantage. A blinded Aries almost gives the referee a Brainbuster, which is ridiculous because he’s wearing a shirt and Delirious is not. Delirious dominates in and outside the ring for the first several minutes, but Aries comes back and starts working the throat, which was how this whole feud got started. Aries tries the Heat Seeking Missile but Delirious moves out of the way! You don’t see that every day. At that point Rhett Titus and Kenny King run out to cause the disqualification at 13:02. That was going along quite fine until the abrupt finish.
Rating: **¾

This is the second annual Toronto Gauntlet. Last year’s included Jerry Lynn, D-Lo Brown, Sonjay Dutt, Jimmy Rave, Necro Butcher, and the winner Davey Richards. This year’s field is quite different. The first matchup is local favorite Tyson Dux versus ROH TV Champion Eddie Edwards, accompanied by Shane Hagadorn. Edwards beat Dux in a non-title match last night in Hamburg, NY at Buffalo Stampede II. It’s a shame Dux hasn’t gotten a real run in ROH, he’s always looked impressive. Edwards repeatedly goes for the Achilles Lock, and eventually Dux is able to roll him up for the upset win at 11:10. That should have earned Dux a shot at the TV Title, but to date this has been his last appearance in ROH. Next out is Shawn Daivari, along with the Embassy leader Prince Nana. Daivari wisely goes right after Dux’s injured leg. Dux fights back but tries to suplex Daivari back in the ring and Nana grabs the leg and Daivari falls on top to advance at 16:50. Next up is Colt Cabana, who beat Daivari last night in Buffalo. Cabana quickly locks Daivari in the Billy Goat’s Curse and Daivari taps out at 17:45. Steve Corino is the fifth entrant in the gauntlet. These two have quite the history as part of the El Generico versus Kevin Steen feud. They brawl in and out of the ring and Corino cheats like crazy to take the advantage. Corino goes for Eternal Dream but Cabana counters with a crucifix to get the pin at 22:49. The last entrant is out now and it’s Roderick Strong. Corino continues to beat on Cabana, allowing Strong to hit an immediate Sick Kick for a near-fall. Strong of course is accompanied by Truth Martini. The fresh Strong dominates for the first bit until Cabana makes the comeback. Strong feigns an injury and when the referee is distracted, Truth hits Cabana with the Book of Truth and Strong wins the Second Annual Toronto Gauntlet at 28:28. The winner of Davey Richards versus Tyler Black later tonight will now have to face Strong in the near future. This was effective in getting Strong and Truth over as a unit, but none of the mini-matches were that strong on their own after the first one.
Rating: **½

During intermission the battle between El Generico, Kevin Steen, Colt Cabana, and Steve Corino continued, battling their way around ringside and in the ring. Generico rips off Bobby Cruise’s tie and chokes Steen with it in a nod to Bryan Danielson. Joe Dombrowski’s yelling on commentary is extremely off-putting.

Both men are quite over with the crowd. Hometown boy Omega uses his impressive high flying maneuvers early on and Daniels uses his cunning to cut him off and slow the pace of the match. Daniels targets the neck and attacks it with precision. They go back and forth and the pace quickens down the stretch with lots of big moves and near-falls. Finally Daniels is able to connect with the Best Moonsault Ever to get the pin and retain his #2 Pick 6 ranking at 16:49. This was one of those back and forth matches that ROH fans eat up and the hot crowd made this a lot of fun. To date this is Omega’s last appearance in Ring of Honor.
Rating: ***¾

MATCH #6: No DQ Match for the ROH World Tag Team Championship – The Kings of Wrestling vs. The Briscoes

The Kings have been the champions since 4.3.10 and this is their second defense. Bobby Cruise announces that the Briscoes have still not arrived at the building. Claudio Castagnoli and Chris Hero get on the mic and talk some trash, and then the Briscoes run in from the crowd and the match WILL happen! It’s a huge brawl from the get-go with the brothers from Delaware dominating. Castagnoli is the first one to bleed. Mark is the second one to get busted open, from the guardrail, and it’s a gusher. The Kings isolate on Mark for a while until the hot tag, and Jay rams Hero’s head into the turnbuckle so many times that he busts him open! Hagadorn gets involved and produces a rope for Hero to tie Jay around the ring post by his neck! Referee Paul Turner tries to free Jay from the post while the Kings just destroy Mark in the ring. Eventually Jay gets free and the Briscoes go nuts on the champions. Shane Hagadorn tries to interfere but take the Doomsday Device for his troubles. Hero hits Mark with the loaded elbow pad but he kicks out! They go to the floor and Castagnoli takes Jay down with a European Uppercut. Hero dispatches of Mark and puts the loaded elbow pad on his foot and the Kings execute the Big Swing/Dropkick to get the win at 18:16. That was awesome – full of hate and blood and the crowd was nuts for it and these two teams just have tremendous chemistry.
Rating: ****¼

Black has been the champion since 2.13.10 and this is his sixth defense. Jim Cornette has joined the commentary team, and he’s trying to sell Black and Richards as the two most “different” people in the history of the world. I mean they’re both men, and wrestlers; how different are they? The crowd is juiced up right from the opening bell, highly in support of Richards and against Black. Cornette and Dombrowski take unnecessary shots at the WWE, Triple H, and Stephanie McMahon on commentary, taking me out of the match momentarily. It doesn’t take long to get back in it though as these two light each other up with kicks and strikes. Black uses his high flying skills to counter Richards’ hard strikes. He even busts out the Rubik’s Cube but Richards kicks out. Richards comes back with some of his own high-flying, taking Black out in the crowd with the dangerous dive that he does. He almost takes out a fan too. Shane Hagadorn comes out and tries to help Richards with a chair, but it backfires on him as Black superkicks the chair into Richards’ face. Richards won’t quit though, and the fight rages on. Black mostly stays in control but Richards is tenacious in fighting back. They pass the 30-minute mark and the crowd is rabid for Richards to take the gold. Richards hits a Buckle Bomb, kick to the head, and the DR Driver but Black kicks out at two! The monkeys in the crowd are already chanting “Match of the Year,” which is obnoxious. Just chant for the wrestlers. Or alternatively, they could chant “You Can’t Beat Him” at Black, which is clever and better. Unfortunately for them though they’re wrong, as Black hits Richards with a wrist-clutch God’s Last Gift to finally put the challenger away at 34:44. That is definitely my favorite match from either of these two not involving Bryan Danielson (as far as I can think of right now). The crowd amazingly stayed hot for the whole thing and both guys went all-out for over 30 minutes. This is a strong contender for ROH Match of the Year for 2010.
Rating: ****½