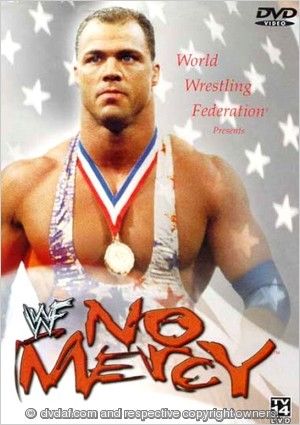 ~MATCH #1~
WCW World Tag Team Champions The Hardy Boyz (Jeff Hardy & Matt Hardy, w/ Lita) defeat Lance Storm & The Hurricane (w/ Ivory & Mighty Molly) at 7:41 to retain the titles. Matt and Jeff have been the Champions since 10.8.01 and this is their third defense. Hurricane is the European Champion at this point. The pace is fast and furious from the start, as one might expect it to be. It’s up to Storm and Hurricane to slow it down, and they do. The Hardys pick things back up, and Lita has to fend off interference from both Ivory and Molly. Amidst all the confusion Matt hits Hurricane with the Twist of Fate and Jeff follows with the Swanton. Matt gets the pin to retain the titles. Great choice for an opener there, with plenty of action and a babyface victory.
Rating: ***

~MATCH #2~
Test defeats Kane at 10:05. This one actually moves pretty quickly too, as both men seem pretty motivated here. Kane actually press slams Test all the way to the floor, but he pays for it when Test blasts him in the face with the ring bell. Alliance referee Nick Patrick does not call for the disqualification, of course. Both men land some big shots on each other. After a pumphandle slam and a big elbow drop from the top rope doesn’t get the pin, a frustrated Test brings a chair in the ring. When Kane gets a hold of it and tries to use it, Patrick takes it away. The ensuring battle allows Test to hit the Big Boot to get the pin. That was shockingly fun, a really solid big man match. They seemed to do quite a bit to protect Kane when Test would’ve benefitted from a cleaner win, but overall it was good stuff.
Rating: ***

A furious Kane delivers two Chokeslams to Nick Patrick, and then follows that up with a powerbomb! I’d say that’ll end the night for Nick Patrick.

~MATCH #3~
Torrie Wilson defeats Stacy Keibler at 3:09 in a Lingerie Match. Stacy attacks before even taking her robe off, which is just scandalous. She thwarts Torrie’s initial attacks with some cartwheels. Torrie takes her down with a clothesline. She charges into the corner and Stacy gets her foot up. Stacy then takes off her robe and slaps Torrie. She pulls a whip from her cleavage and uses it on Torrie’s behind. That just makes Torrie mad, and she takes Stacy down with a spear. They roll around the ring now and include the “rolling over the referee” spot. Stacy chokes Torrie in the corner with her long leg. They do the fish out of water sequence but no one can get a pin. Stacy goes back to more creative choking but Torrie slams her out of the corner. Torrie then hits the handspring elbow (sort of) to get the pin. Give the girls credit, they tried out there. They played their roles well. I’m just trying to be nice.
Rating: *

~MATCH #4~
Edge defeats WWF Intercontinental Champion Christian in a Ladder Match at 22:12 to win the title. Christian has been the Champion since 9.23.01, and this is his third defense. Edge charges to the ring and they waste no time getting this one underway. They actually brawl into the crowd for a bit, which is unusual for a ladder match. Both men are obviously experts in ladder usage from their tag team days, and neither man is shy about proving that. Christian adds chairs to the mix, which he and his “brother” have also proven adept at over the years. After over 20 minutes of brutality, Edge gets Christian splayed out on top of a ladder and delivers a crushing Con-Chair-To to knock Christian silly. That’s more than enough for Edge to pull the title down and begin his third reign as I-C Champion. Good stuff here from two ladder match pros, though it’s hard to see them in a singles ladder match after the craziness of ladder matches with six guys in them. Still, no faulting the effort, and the finish made sense from a storyline perspective as well as being a legit finish.
Rating: ***¾

~MATCH #5~
WWF World Tag Team Champions The Dudley Boyz (Bubba Ray Dudley & D-Von Dudley) defeat Big Show & Tajiri at 9:30 to retain the titles. The Dudleys have been the Champions since 9.17.01 and this is their fourth defense. When Tajiri is in the ring, the Champions have the advantage. When Show is in the ring, the challengers have the advantage. Late in the math Tajiri finally has some control, but when he goes for the Mist he hits the referee with it instead. With the referee knocked out, Rhyno rushes in and takes Show out with a Gore! Moments later Team 3D is able to catch Tajiri with the 3D to get the pin and retain. This was pretty fine and all, but not much different than what you could see on TV at the time. Plus Big Show and Tajiri was such a random nothing team that no one bought them winning the titles.
Rating: **½

~MATCH #6~
Undertaker defeats Booker T at 12:10. Booker attacks on the floor before the match can begin, but it’s not long before Undertaker takes control, because that’s all he did at this time. Seriously, Undertaker in 2001 was flaming death for anyone trying to have a good, competitive match. They do the usual back and forth, with Booker getting in a small amount of offense but Undertaker never appearing to be in much danger. In the end, Booker foolishly goes for mounted punches in the corner and Undertaker brings him out with the Last Ride to get the pin. This was the worst version of the Undertaker, and working with him did Booker no favors.
Rating: **

~MATCH #7~
Chris Jericho defeats WCW World Heavyweight Champion The Rock at 23:44 to win the title. Rock has been the Champion since 8.19.01, and this is his eighth defense. This one gets heated pretty quickly, as this was a very intense and personal rivalry with a lot on the line. They fight both in and out of the ring, mixing big moves and big strikes into their attacks. Jericho in particular has something to prove here, and he’s throwing out everything he’s got, working a hybrid heavyweight/cruiserweight style. He hits Rock with his own Rock Bottom, and follows with a Lionsault but Rock kicks out! Jericho tries a People’s Elbow but the Rock moves out of the way. Rock puts on the Sharpshooter and Jericho reaches the ropes. They head to the floor and Rock puts Jericho through the Spanish Announce Table with a Rock Bottom. Back in the ring Rock hits the spinebuster and tries the People’s Elbow but Jericho moves and puts on the Walls of Jericho! Stephanie McMahon makes her way down and slides a chair in the ring. Rock pulls Stephanie into the ring and hits her with a Rock Bottom! Jericho takes advantage and hits the Breakdown on the chair to win the big one. This match ruled. Jericho wrestled like a man possessed, and Rock was a perfect foil and did everything he could to make Jericho look like a million bucks. The Stephanie interference actually worked here too, as it helped make Jericho look desperate to prove himself and win the big one, which served him well in his eventual official heel turn.
Rating: ****½

~MATCH #8~
WWF World Heavyweight Champion Steve Austin defeats Kurt Angle and Rob Van Dam in a No Disqualification Triple Threat Match at 15:16 to retain the title. Austin has been the Champion since 10.8.01, and this is his first defense. Angle wastes no time whipping out German Suplexes, but he quickly gets overwhelmed by the numbers game. RVD is just absurdly over here. The action is just non-stop here, both in and out of the ring. When all three competitors are laid out, Mr. McMahon makes his way out to ringside. He had been supporting RVD leading up to this show. Austin hits Angle with a Stunner and Angle rolls to the floor. When Austin turns his sights to RVD, Mr. McMahon sneaks in the ring and cracks Austin with a chair. RVD hits a Five-Star Frog Splash but Angle breaks up the pin. When Angle gets ready to make a pin Shane McMahon comes running out to break it up. Mr. McMahon hilariously takes his son out with a running clothesline over the announce table! Back in the ring Austin nails RVD with the Stunner to get the pin. That was just non-stop action with a hot crowd into everything they did. The intrigue of what role Mr. McMahon would play helped add to the drama. These three characters were perfectly matched together. I think this match is a bit overlooked.
Rating: ****

A2Z Analysiz
Two great matches close out a tremendous card, just one of many great ones in 2001. The Jericho/Rock match steals the show, but the triple threat more than does its share too. You know when Test and Kane have a good match early in the show you’re in for a good night, and that’s exactly what happened here. Thumbs way up.