The show begins with a beautiful image paying tribute to Bobby Heenan before Kurt Angle comes down smiling. Kurt recites WWE Words about how exciting the No Mercy PPV is going to be before Miz comes out with his goons – sans Maryse. Miz says he’s underused and Kurt says he agrees and the winner of Jason Jordan vs. Elias vs. Jeff Hardy vs. Matt Hardy will face him at the PPV. Miz asks that Jason Jordan doesn’t deserve anything he’s gotten. Well, he’s not wrong and he insults Kurt for being a bad father. 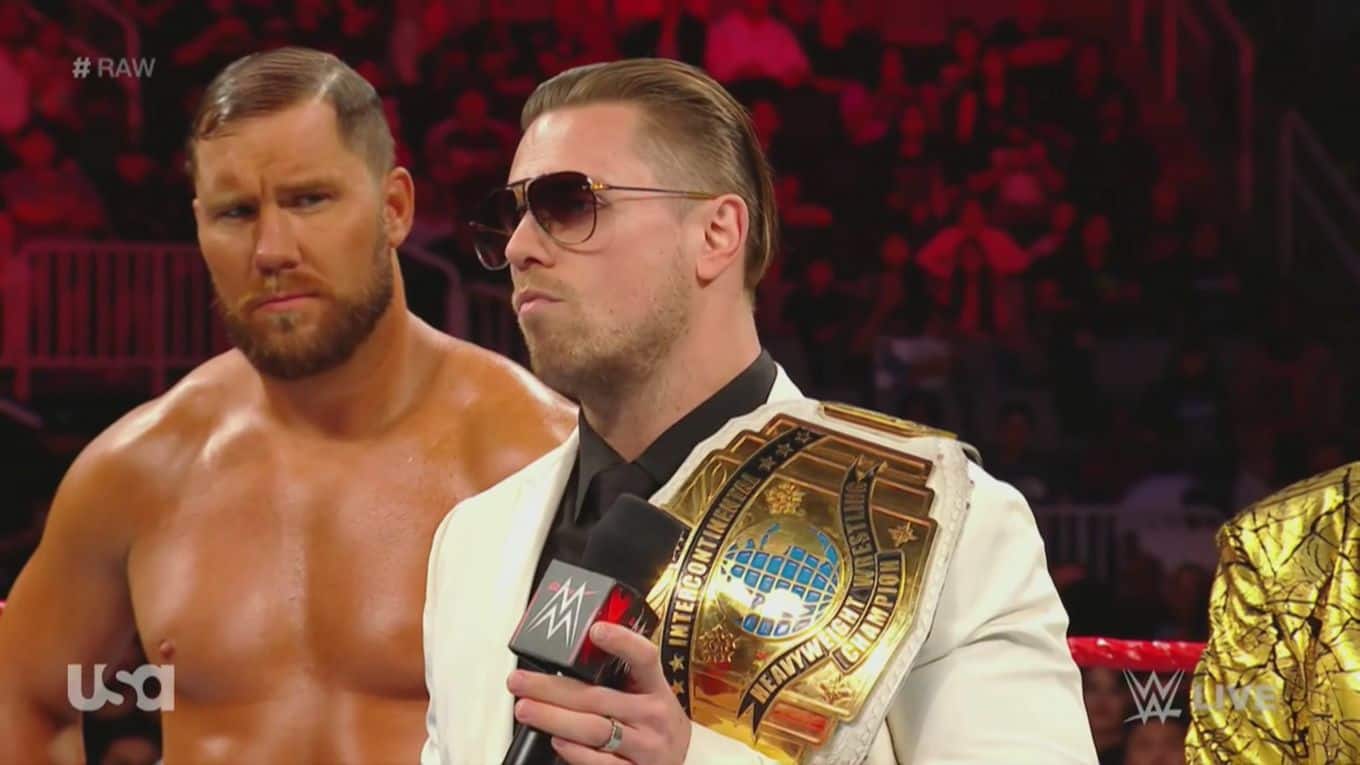 Jason Jordan comes down to defend his dad and wants Bo and Axel in the match too to shut Miz up. Kurt makes the match and Miz points out that he’s just given himself a worse shot at winning before JJ takes out the heels. This almost got a reaction for Jordan. Cole says he’ll interview Braun and Brock later and we’ll hear from Roman later too. Alexa Bliss vs. Nia Jax is up next. Backstage, Kurt tells JJ to calm down before Jordan says that everyone gives him dirty looks and he needs to prove himself. 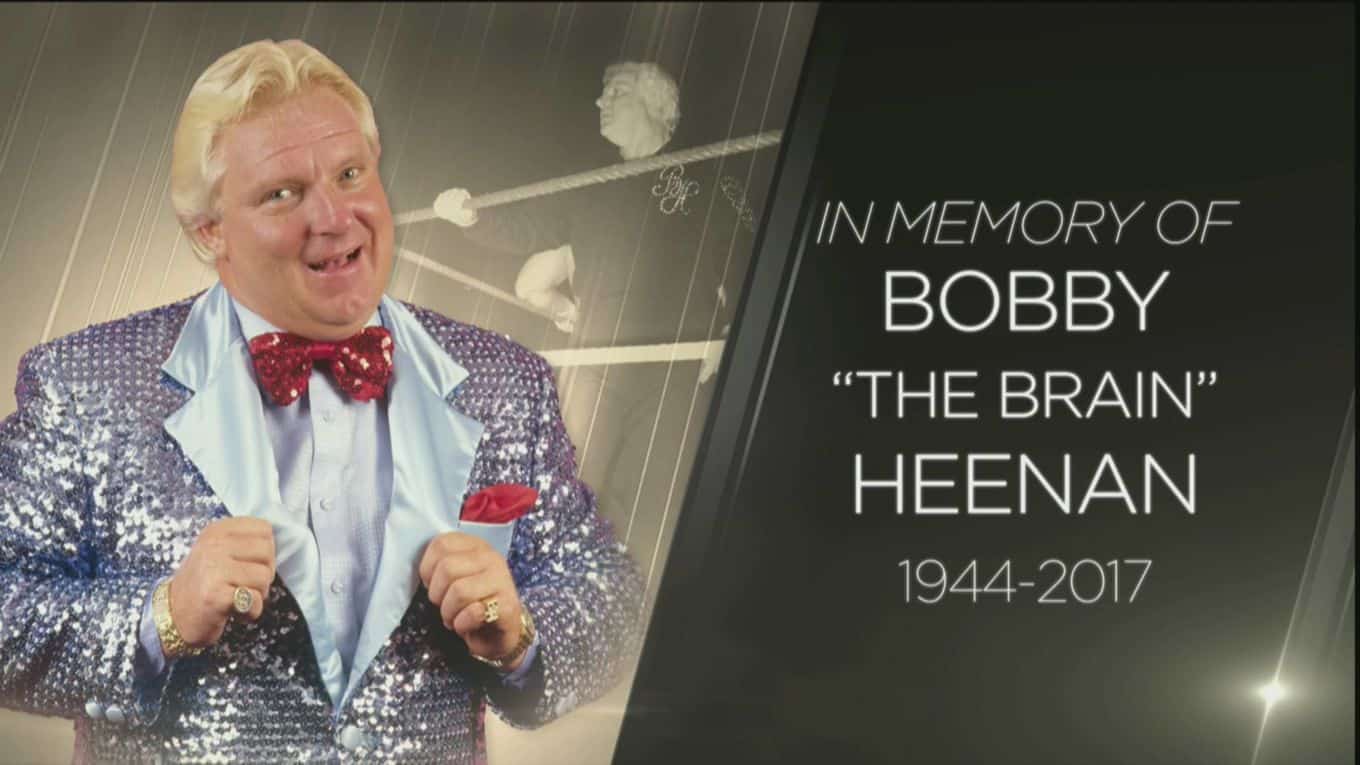 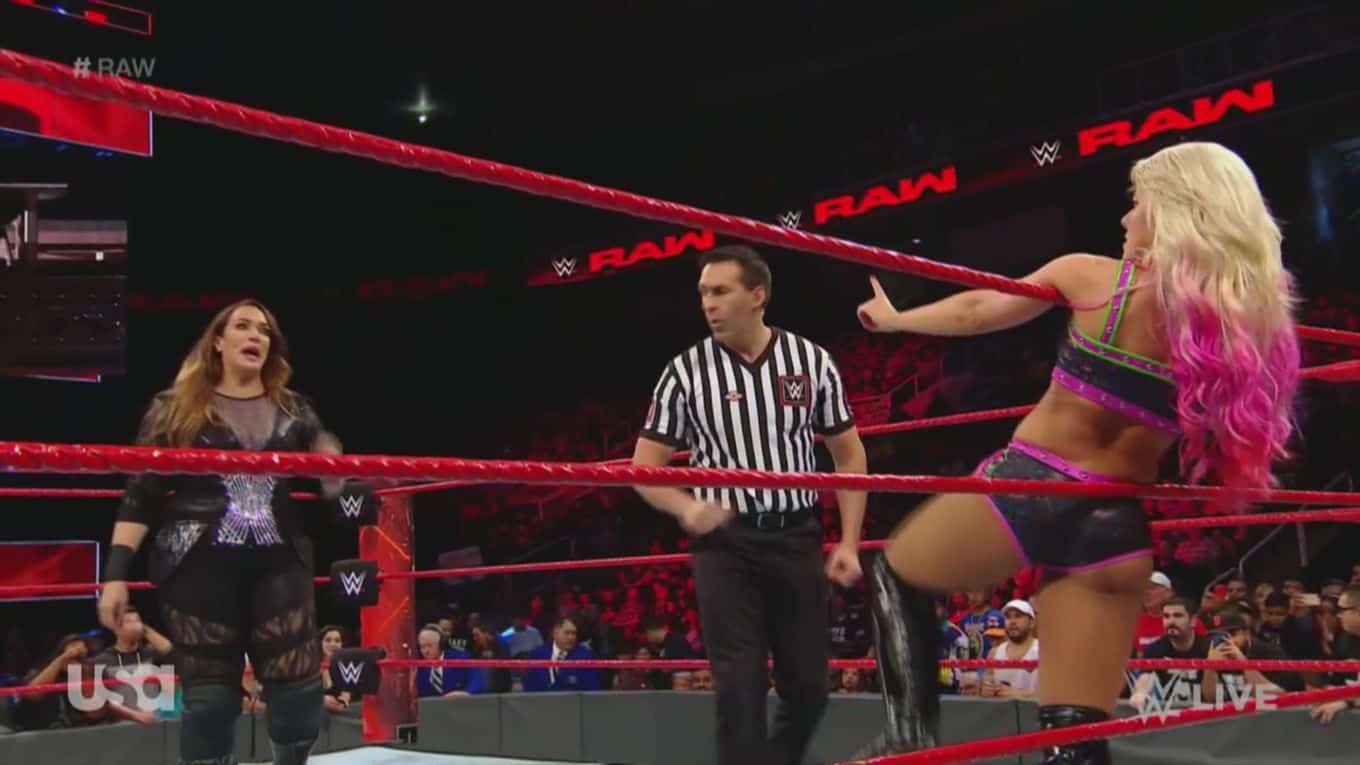 Alexa darts around and stalls for as long as he can before getting tossed around. Alexa goes to leave, but Sasha prevents it. Nia bowls Alexa over for an ad break. Nia misses the chugga chugga choo choo spot and Alexa runs wild before Nia catches her off the top and plants her with a Samoan drop to win it. Sasha jumps her, but Nia beats her up too. Bayley returns to a mild pop in her hometown and everyone teams up to spear Nia down. Bayley and Sasha raise hands before Alexa jumps in and gets beaten up – so she’s got to be retaining. Booker hypes up Cena vs. Roman and Cole pimps the Network and how if you sign up for one month now, you get No Mercy and Hell in a Cell. 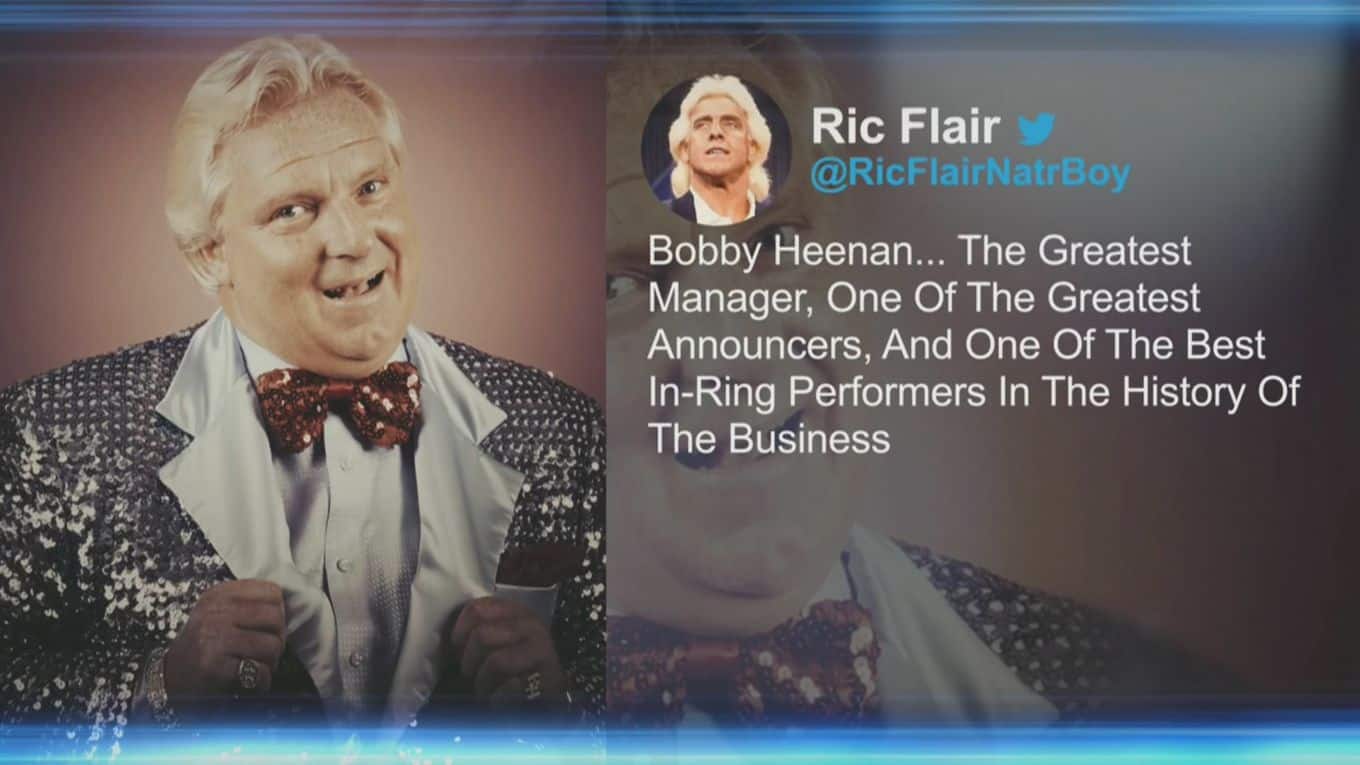 A Twitter montage tribute is paid to Bobby Heenan. We get a recap of Brock destroying everyone in WWE in 2002 before his prior five years of mayhem. Braun’s wrath is shown as well and Paul narrates the entire video about how Brock has never faced someone who could cart him out of an arena before. Parallels are drawn again with them clotheslining everyone and also breaking the ring with the Big Show superplex. The Bar comes down to face The Club, but first, they rant about nostalgia and remakes. They destroyed the Hardys and they’ll destroy the Shield too. Sheamus gets whatted, so Cesaro keeps stating Sheamus’s point since the fans clearly don’t understand what they’re saying. Seth and Dean come down to add more talking to things and Seth says that they look like Taxi Driver and Braveheart hybrids. The Club comes down and calls Seth and Dean NERDS. Seth and Dean send everyone packing.

It’s now The Shield vs. The Club vs. The Bar. Sheamus tackles Seth down before Seth dropkicks him. Sheamus and Luke go at it and have a fun hoss war before the faces land a series of dropkicks to Sheamus. Cesaro smashes Dean into the dasher boards on the floor. Karl attacks Dean with a big spinebuster for 2 before Luke hits a delayed suplex and a chain of elbows. Seth comes in and darts around before getting a slingblade and a sunset flip buckle bomb gets 2. The Club gets a Magic Killer to Seth for 2. Cesaro dominates Seth before tagging in Sheamus and they hit a nasty 3D for 2.5. Dean superplexes Karl and gets the flying standing elbow for 2. Dive dives from the faces to heels, in stereo to each set of heels. Sheamus gets a blind tag and Dean hits Dirty Deeds, so Sheamus tosses him out and pins Karl to win it. 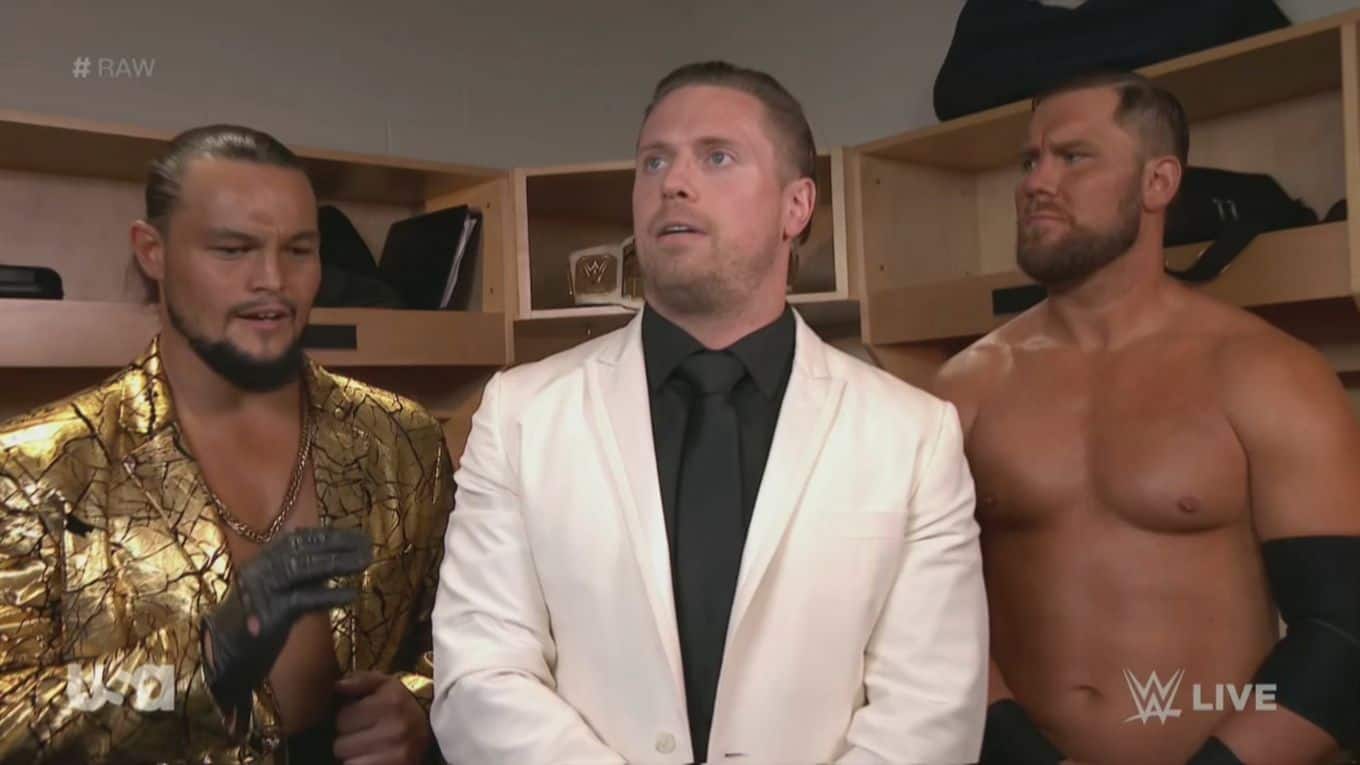 Miz hypes up his goons while burying Jordan for doing nothing. Bo says that Miz should talk about them and he agrees – Axel and Bo hype up their family legacies. We get an MITB recap before Booker shows off his ring and Cole shows off another parallel video – now for Roman vs. Cena. Each man is shown winning the US Title, the Royal Rumble, and the WWE Title, before Roman is shown retiring the Undertaker.Kurt talks to someone with his phone turned off before Goldust comes in without paint and asks for a second chance with Bray. He isn’t asking for a shot as Goldust – he’s asking as Dustin Rhodes. Kurt gives him his match and Cole hypes up “Dustin Rhodes”. Curt Hawkins says the Curt Hawkins Star Factory is closed – it will be replaced by the History Machine and ends his 114 match losing streak. 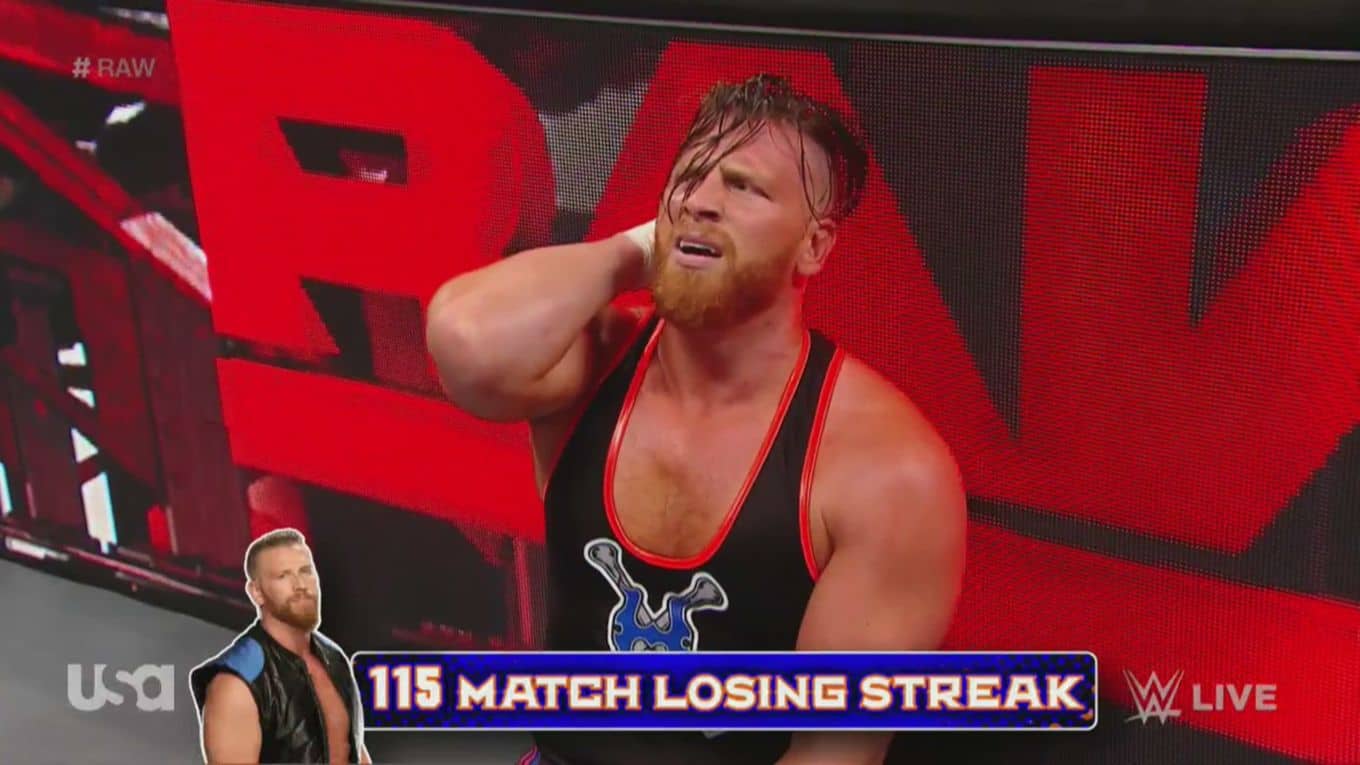 Apollo Crews comes out to no reaction to face him. Hawkins goes from gear inspired by Jerry Lynn to Bret Hart-inspired gear. Hawkins hits a sloppy Pele for 2. A Hawkins spinebsuter gets 2, but he eats a pair of kicks and the towerhacker bomb ends it. A graphic goes up showing a 115 match losing streak for Hawkins. Cole does a side-by-side interview via satellite with both Brock and Braun. Heyman says Braun will be conquered like Taker was and Braun says no one has left Brock laying like he has. Everyone question has a funny delay since the actual interview stuff was pre-taped. Paul says Braun will go to suplex city and Braun says that Heyman can say anything he wants, he’ll take Brock out. Cole asks Braun about the parallels before Heyman interrupts and says he should talk about the champion. Brock ends things with a simple “suplex city, bitch”.

Bayley’s return is shown and she is added to the fatal four way at the PPV. Roman comes down and says he isn’t a jacked up white guy with a crew cut and that Cena just says stupid shit sometimes. Roman says if he was nothing but a clone he’d be out of work – like Alex Riley. Roman cites clips of Cena from 2012 saying that Rock’s just a part-timer and then he closes with Cena’s closing lines against the Rock. Okay stuff, but nothing amazing here. The Hardys cut an awkward promo on each other before a fist bump. 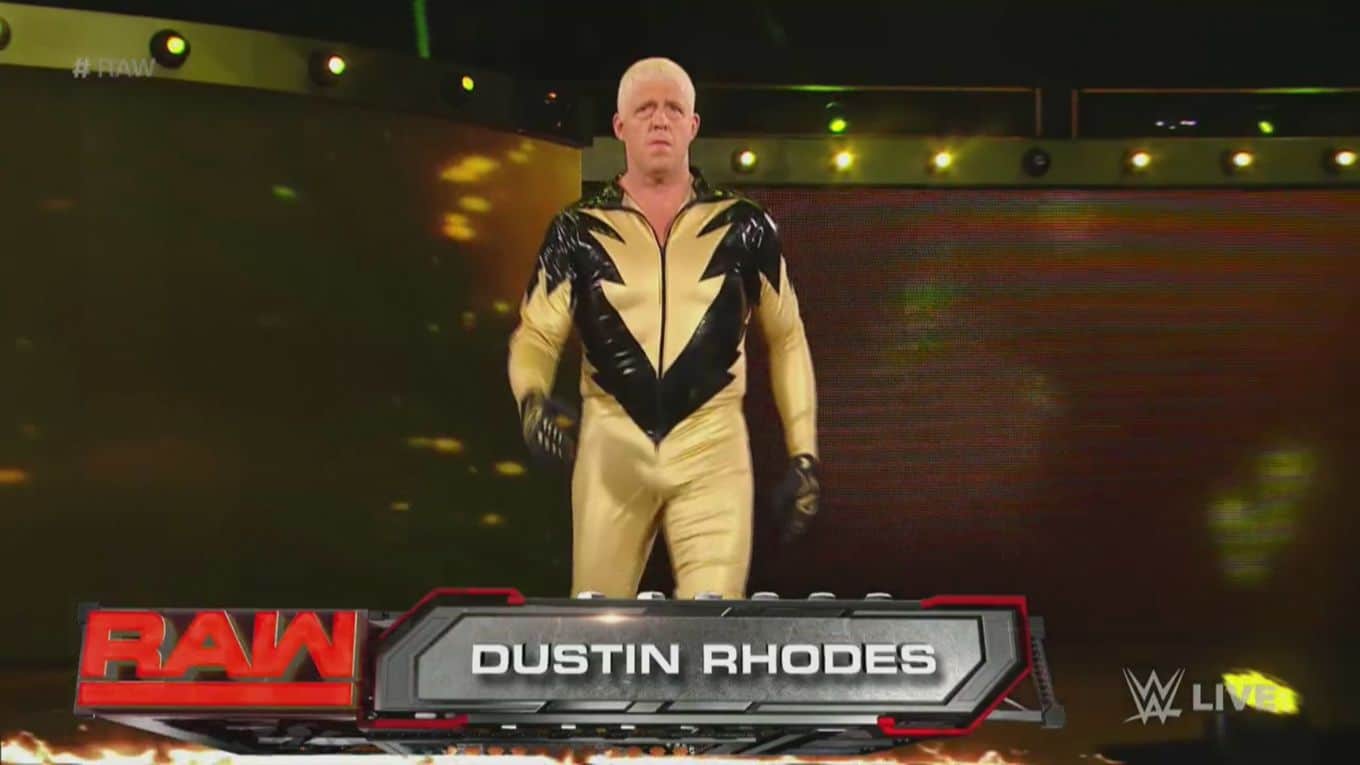 Bray comes down while Cole hypes up the “man vs. man” match at No Mercy between Bray and Balor. Bray is shown losing to the Demon at Summerslam before Dustin comes down in his bodysuit and theme. Dustin sends Bray out and gets a “let’s go Dustin” chant. It’s amazing what one heartfelt-feeling promo can do for you. Dustin tosses him into the steps and bulldogs him on the floor. Goldust hits Shattered Dreams, but Sister Abigail ends it. Bray talks about the Demon making him greater than himself. He says that since he, the man, made the demon, he’s more dangerous than the mere demon. 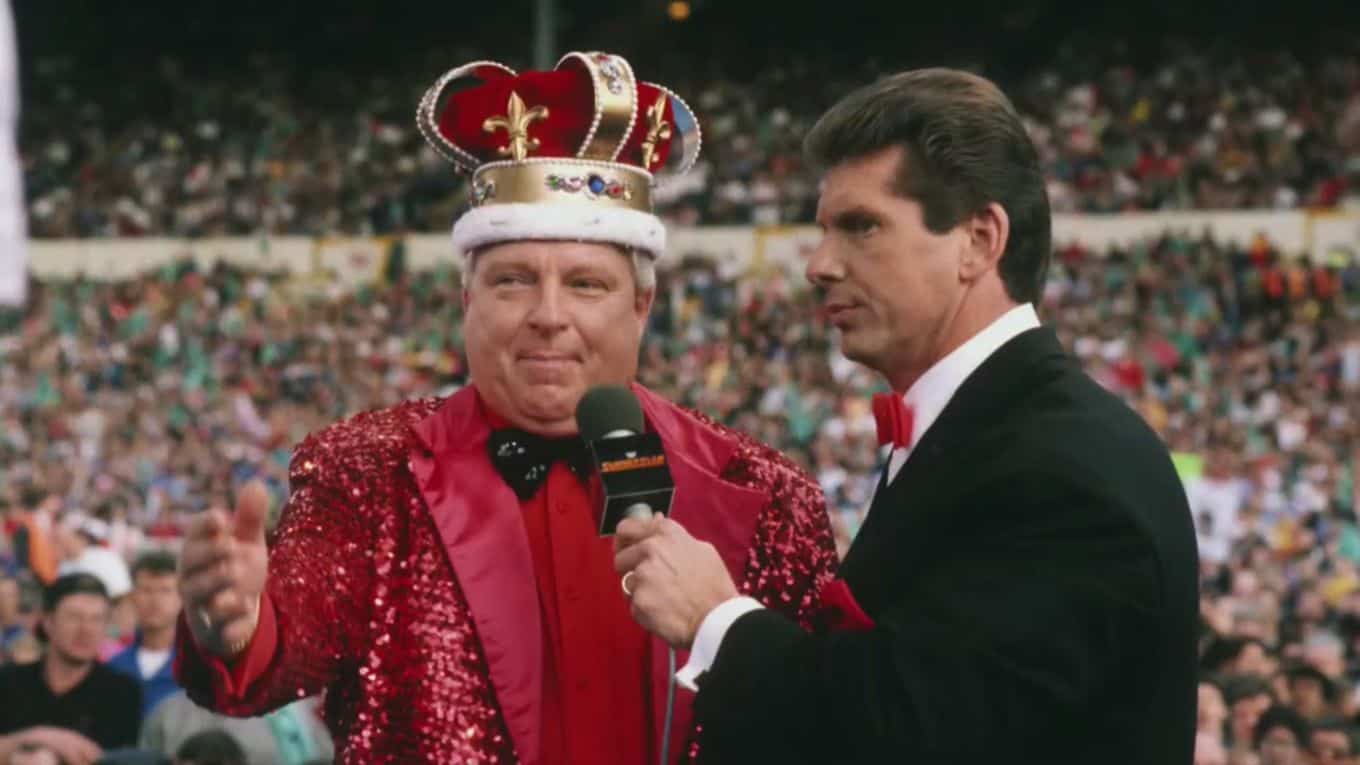 We get another Heenan video and they call him the best commentator ever with Monsoon. Booker manages to put himself over in all this since Heenan called his work in WCW. We get one of the best video packages in company history on Bobby Heenan, showing off some of his best work as s comedic actor, a commentator, a bump-taking manager, and a promo-cutting manager. Enzo comes down and does his usual promo and Braun massacres him! He bulldozes him on the ramp before hitting the chokeslam and powerslam mid-ring. Neville comes down and is in sheer awe of Braun. Neville hits the red arrow and cackles while asking “how you doing!?” This was short and sweet. 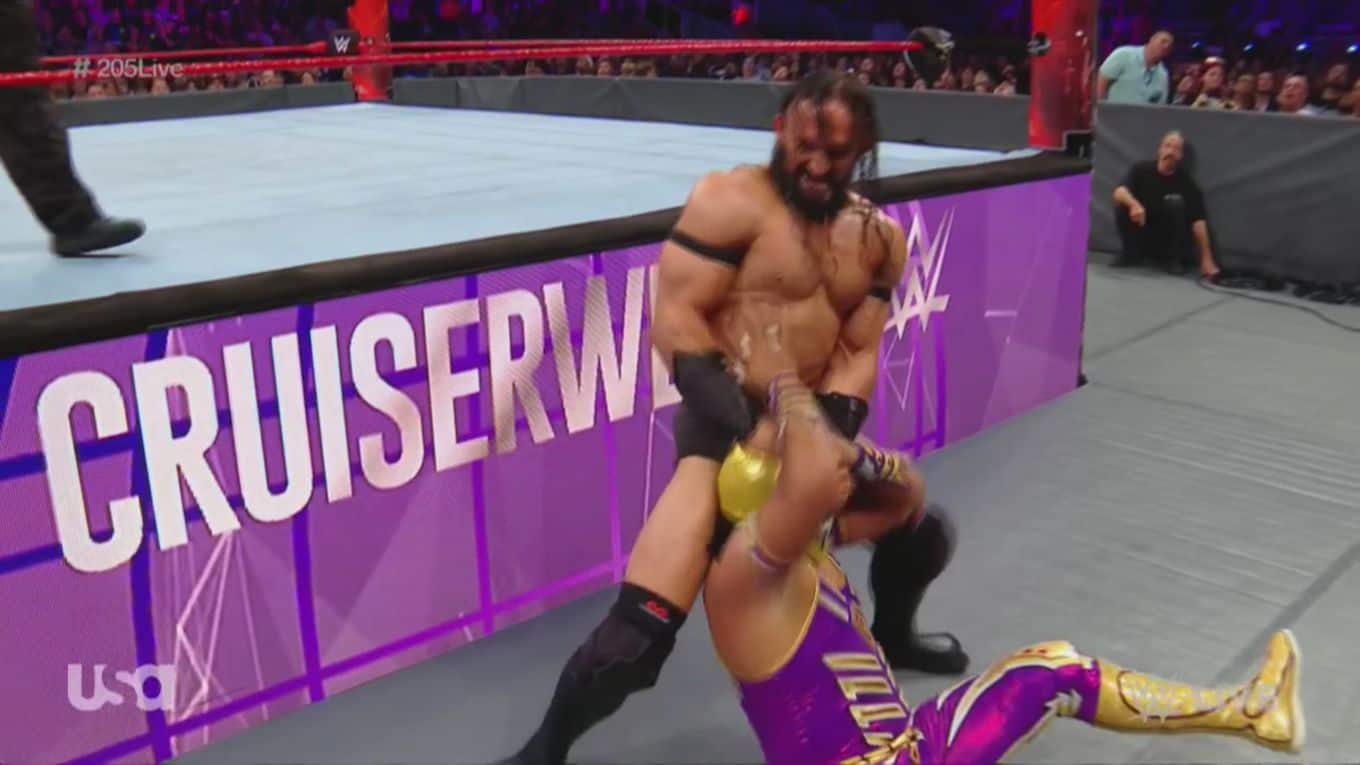 Dasha asks Enzo how he’s doing and he says he’s not good. He may not beat Braun, but he can beat Neville. Neville faces Gran Metalik in what may be the latter’s first singles match on Raw. Metalik gets a running rana and a missile dropkick. Cole says “Metalik is, in many ways, a Prince of the Ropes” How many ways can there be to be a prince of the ropes? Was his dad the king of the ropes, because that would seem to be the only way to be the prince of the ropes? Neville rips away at Metalik’s mask and briefly reveals one side of his face before Neville eats a double jump dive and a tightrope splash for 2. Metalik goes for a moonsault, but eats a pair of boots and is dragged down for a Rings of Saturn that ends it. WWE celebrates Jennifer Lopez for hispanic heritage month.

Neville and Enzo will go face to face on 205 Live. Elias sings about how everyone in San Hose is a failure. Everyone comes in and brawls before the Hardys are standing mid-ring for an ad break. Everyone punches away before a neckbreaker gets 2. Miz attacks Jordan and Jeff hits a jawjacker. Jeff goes up and destroys Axel with a swanton. Miz attacks him and Jeff tosses him out. Axel hits the snapmare driver before Jordan hits the back suplex into the neckbreaker to win and go to No Mercy. Miz goes to cheapshot him, but he eats a big belly to belly and the goons help Miz out before a skull crushing finale ends things. Miz says that after No Mercy, he’ll still be champion, Kurt will still be a bad father, and Jordan will still be a bastard. 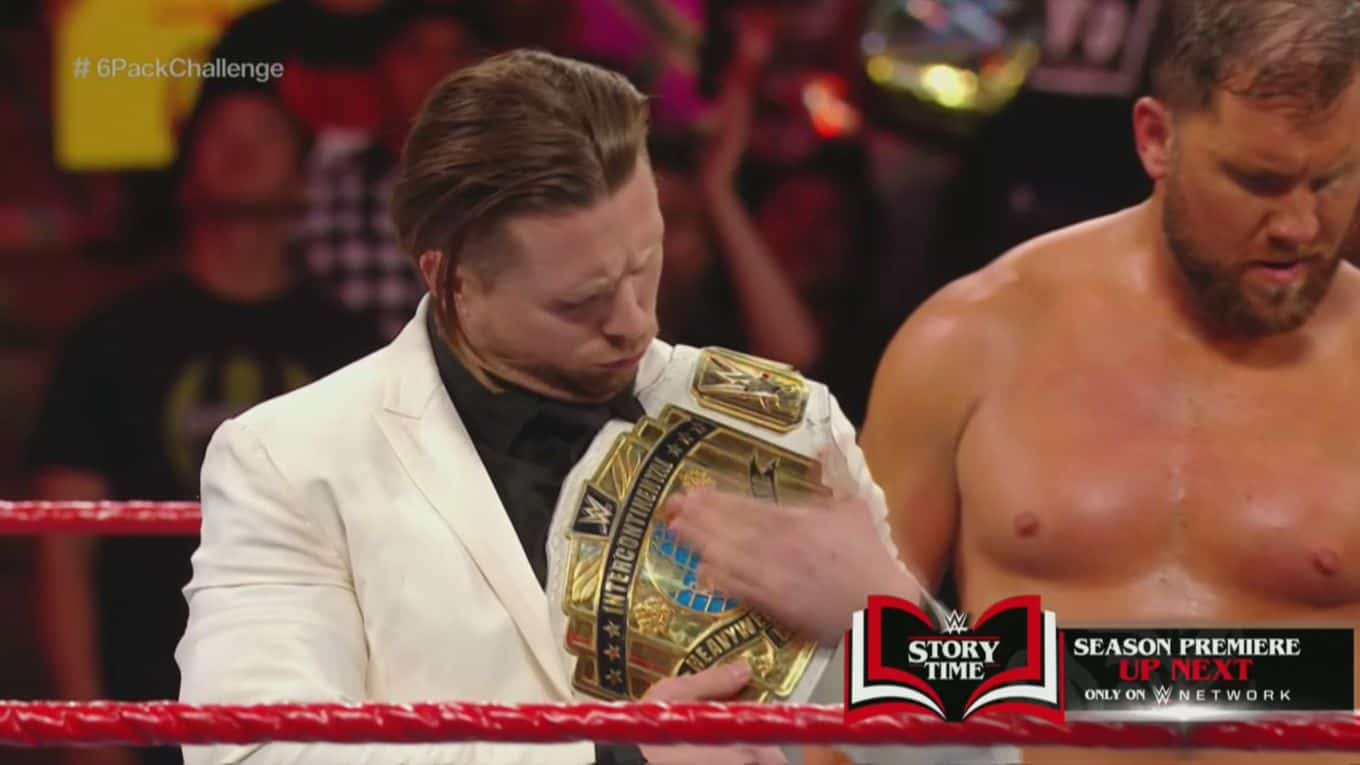