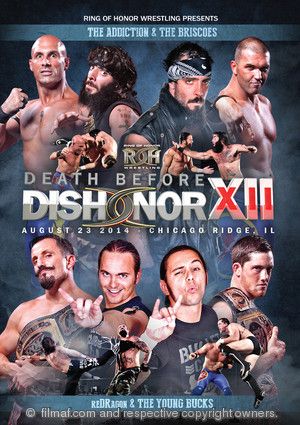 Before the main show, CHEESEBURGER, Will Ferrara & Louis Lyndon defeat Stokely Hathaway, Psycho Mike & Matt Sells at 7:20. No commentary for this match. This is a pretty typical pre-show six man tag, with everyone just trying to show off what they can do with a limited amount of time. CHEESEBURGER plays the face in peril for a bit before making the hot tag. Ferrara is a house afire and the referee loses control. Everybody gets one last move in, and Ferrara nails Psycho Mike with a Code Red to get the pin. Perfectly fun and acceptable preshow stuff here.
Rating: **¼

In the opening match, The Decade (Jimmy Jacobs & Roderick Strong) defeat Monster Mafia (Ethan Gabriel Owens & Josh Alexander) at 10:45. The Decade have their young boys Adam Page and TaDarius Thomas with them. Jacobs and Strong are the ROH veterans here, but Owens and Alexander are able to keep pace with them in the opening minutes. After the opening flurry the match settles down with the Decade in control and they’re working a classic tag team formula here. Monster Mafia show off some great teamwork but it’s not enough. Strong sends Alexander to the floor and then hits Owens with a knee strike and Death by Roderick. Jacobs follows with a Spear to get the pin. Good choice for an opener here, with rock solid tag team formula stuff accentuated by great teamwork on both sides.
Rating: ***¼

ROH World Television Champion Jay Lethal (w/ Truth Martini) defeats Caprice Coleman at 11:46 to retain the title. Lethal has been the Champion since 4.4.14, and this is his twelfth defense. He also has his bodyguard Seleziya in his corner. Coleman dominates the early going, frustrating the Champion. Lethal accepts help from Truth to claim the advantage. They battle back and forth, with more interference by Truth and Seleziya wherever they can. In the end Lethal connects with the Lethal Injection to get the pin. Solid match here thanks to the chemistry between the opponents, but Coleman never posed a serious threat to the title.
Rating: ***

In a Four Corner Survival Match, ACH defeats Michael Bennett (w/ Maria Kanellis), BJ Whitmer, and Silas Young at 13:04. Whitmer has Page and Thomas with him. This is being contested under Scramble Rules, so no tags are necessary. The action is fast and furious from the get-go, with all four men showing off what they can do. This is a bit of an interesting dynamic because ACH is the only babyface against three heels, and he spends a lot of the match getting beaten up. There is some tension between Whitmer and Bennett stemming from when Bennett injured Whitmer with a piledriver on the apron about a year prior to this. ACH lands his big dive on all three opponents, and then lands the Hero’s Grip on Whitmer to get the pin and win his second multi-purpose match this weekend. That went on a little bit long for what they were going for, but they managed to keep the action moving along at least. Plus it’s a good win for ACH.
Rating: **¾

Adam Cole defeats Hanson at 10:33. This is a pretty distinct clash of styles going on here. Hanson refuses to be intimidated by the former ROH World Champion, and uses his power to assert himself. Cole uses his speed and mental acumen to try and subdue the War Beard but Hanson has something to prove here. The determined Cole focuses on Hanson’s knee, always a good strategy against a big man, and uses the Figure-Four Leglock. Moments later Hanson gets all fired up and looks for a big suplex, but Cole counters with a perfect inside cradle to get the pin. I quite enjoyed that match, as the differing styles of these two wrestlers meshed well together. Hanson looked good here but Cole was just better, which is correct.
Rating: ***¼

After the match, Cole mocks Hanson and is about to pay for it, but Michael Bennett and Maria Kanellis come out to tip the scales. The Kingdom takes Hanson out and Cole says some pretty rude things on the microphone, which finally brings Michael Elgin out for the save. Before Elgin can say anything, Tommaso Ciampa’s music hits! Looks like we’re going to have our World Title match RIGHT NOW.

ROH World Champion Michael Elgin defeats Tommaso Ciampa at 15:58 to retain the title. Elgin has been the Champion since 6.22.14, and this is his seventh defense. This is an absolute war, as both men are known for hitting hard and they certainly live up to that reputation. They battle both in and out of the ring, and the match almost ends after Elgin hits a Death Valley Driver off the apron and through a ringside table right around 10 minutes in. Both men are able to get back in the ring before the count of 20 and the match continues. They continue to destroy each other with strikes and brutal looking submission holds, but neither man will give in. After a series of reversals, Elgin is able to strike with a forearm to the back of the head and a brutal spinning back fist. Elgin then unleashes a series of knee strikes to the head and referee Todd Sinclair stops the match. That was unbelievably stiff and insanely brutal. There was nothing complicated about the story being told here, but there certainly didn’t need to be. Both men look like certified badasses after that fight. I love it.
Rating: ****¼

After the match Ciampa loses his mind and tries to attack Kevin Kelly, but Steve Corino and a bevy of official sand staff are able to make the save. When Bobby Cruise gets in the ring to announce the next match, Ciampa attacks him instead and destroys him with a series of unprotected knee strikes in the corner. That’s going to earn him a suspension for sure.

Adam Page defeats Adam Pearce at 8:00. Page has Jimmy Jacobs, BJ Whitmer, and TaDarius Thomas with him, as this is the second night of Pearce trying to teach the Decade’s young boys some respect. When Page accepts the pre-match handshake Pearce smacks him in the mouth. Pearce uses his veteran wiles in the early going and antagonizes the crowd quite a bit. Page shows some good fire but gets overwhelmed by the tactics of the Scrap Daddy. When Pearce goes for the Piledriver, Page is able to cradle the legs and score the pin. The match was decent but in this case it’s more important to be an effective story, and in this case it certainly was, so that’s a success. After the match Pearce goes for another handshake and Page accepts again, only to get slapped in the face. Jacobs chastises Page for being stupid, even though he won the match.
Rating: **¼

AJ Styles defeats Cedric Alexander at 17:24. Styles is the IWGP Heavyweight Champion, but that title is not on the line here. Even so, the Champ dominates most of the early portions of the match. Alexander shows great perseverance and is able to reverse the momentum and work Styles over for a bit. They continue to trade momentum back and forth, and Styles focuses on Alexander’s knee. Even so, Alexander is able to catch Styles with the Lumbar Check but he’s too injured to capitalize. Moments later Styles traps Alexander in the Calf Killer to get the tap out victory. This was highly disappointing. They just did some moves back and forth and it never once appeared that Alexander was a threat, which hurt. The moves they did all looked good, there was nothing wrong there. These two are talented enough to still have a good match despite that, it just never had the sizzle of a semi-main event match.
Rating: ***

In an Eight Man Elimination Tag Team Match, The Young Bucks (Matt Jackson & Nick Jackson) & ROH World Tag Team Champions reDRagon (Bobby Fish & Kyle O’Reilly) defeat Christopher Daniels, Frankie Kazarian & The Briscoes (Jay Briscoe & Mark Briscoe) at 23:04. Fish and O’Reilly are the Tag Team Champions, but obviously this is a non-title match. As anyone would expect with this many talented grapplers in the match, the action is fast and furious here and coming from eight different directions. Referee Todd Sinclair has very little control for the duration of this match. The first elimination finally comes when Daniels and Kazarian hit O’Reilly with Celebrity Rehab and then Daniels hits the Best Moonsault Ever to get the pin and eliminate the Champions at 17:20. The Young Bucks are at quite a disadvantage now, but they quickly even the odds with a spiked tombstone Piledriver on Daniels to eliminate him and Kazarian at 18:51. Now we’re down to a rematch from last night, with the Briscoes and the Bucks going back and forth at a rapid pace. Nick and Matt Jackson are able to withstand some of the Briscoes’ big moves and they polish off Mark with More Bang for Your Buck to get the huge win. That was non-stop action from four great teams that whipped the crowd into a frenzy. Watching the Young Bucks do what they do is just an unfair amount of fun for wrestling fans.
Rating: ****

A2Z Analysiz
This is actually a step below the previous night’s show but it’s still quite solid from top to bottom. The ROH World Title match in the middle of the show is the clear highlight, but the main event was tons of fun and really good stuff too. I would have to consider both Death Before Dishonor shows this year a big success.