To get you caught up on this AMAZING journey, in the last several months of Green Lanterns we’ve seen the revelations on who the first 7 Green Lanterns were. During that time, in a modern day battle with Volthoom, who continues to look for his Travel Lantern from Earth 15. 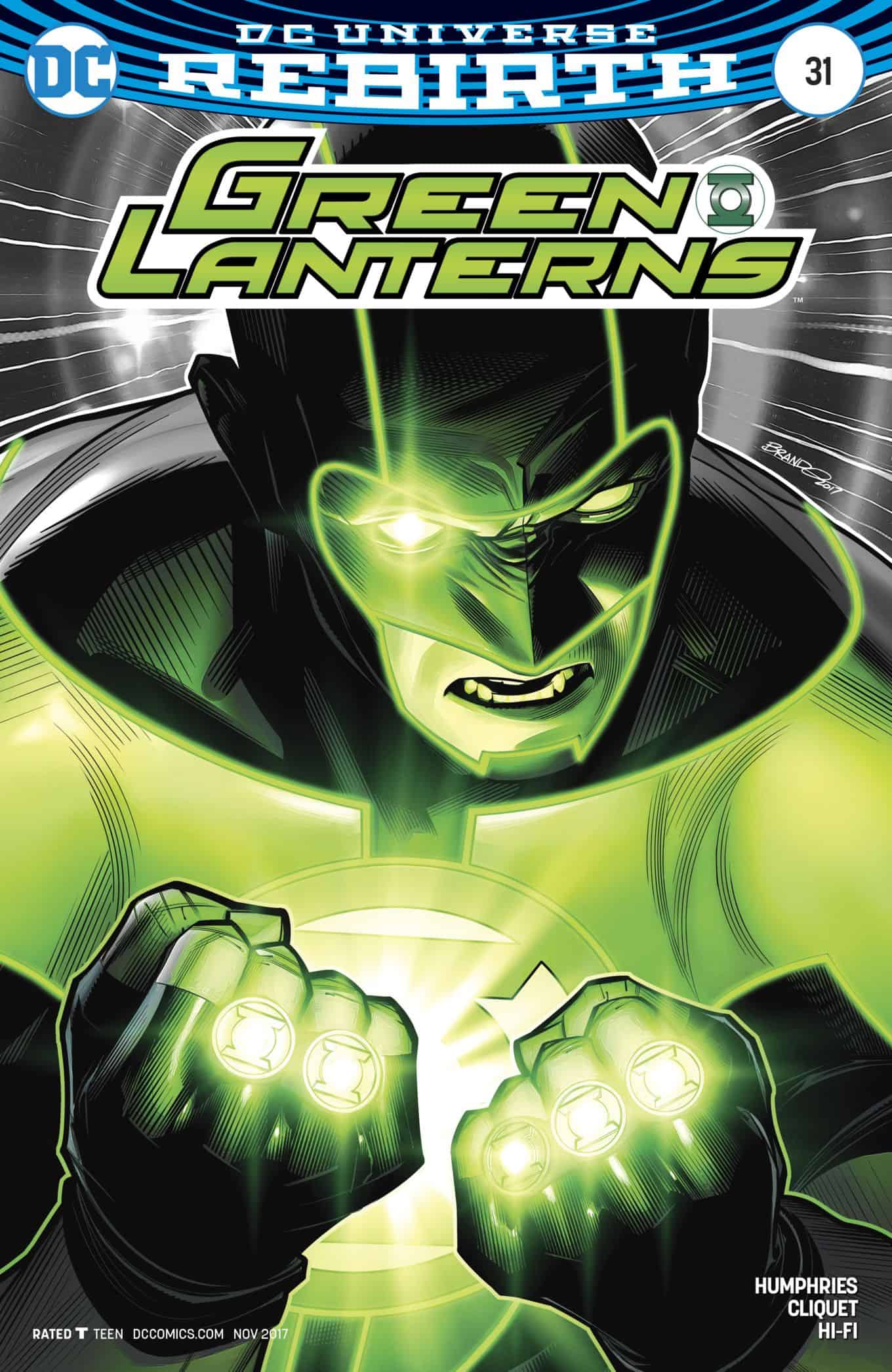 So, to recap, with the first 4 Green Lanterns, the 7 first lanterns are:

A Graveyard of Light indeed. 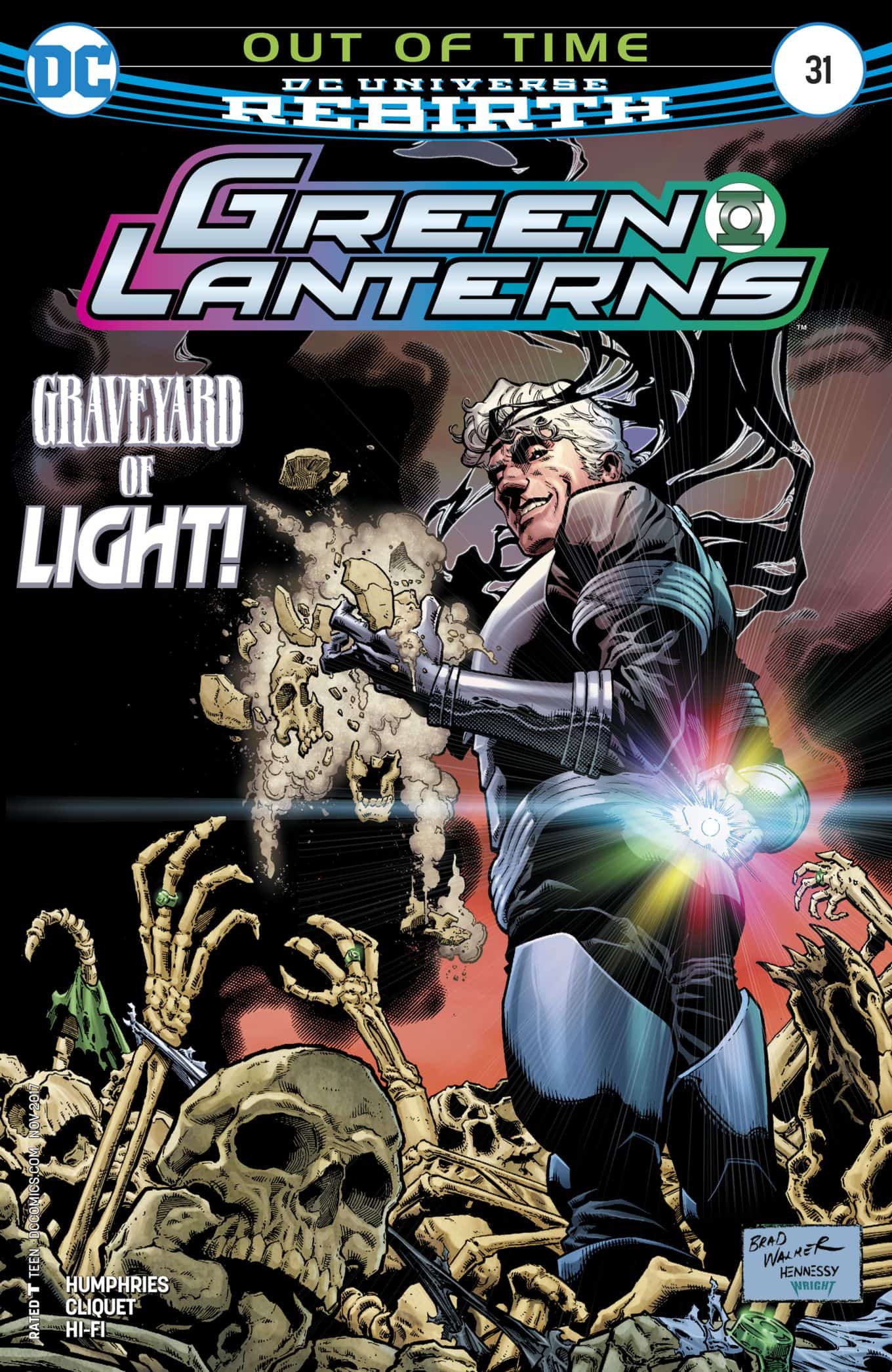 As of the last issue, a ringless Simon Baz actually has been chosen by the First Green Lanterns four (4) rings as their champion. 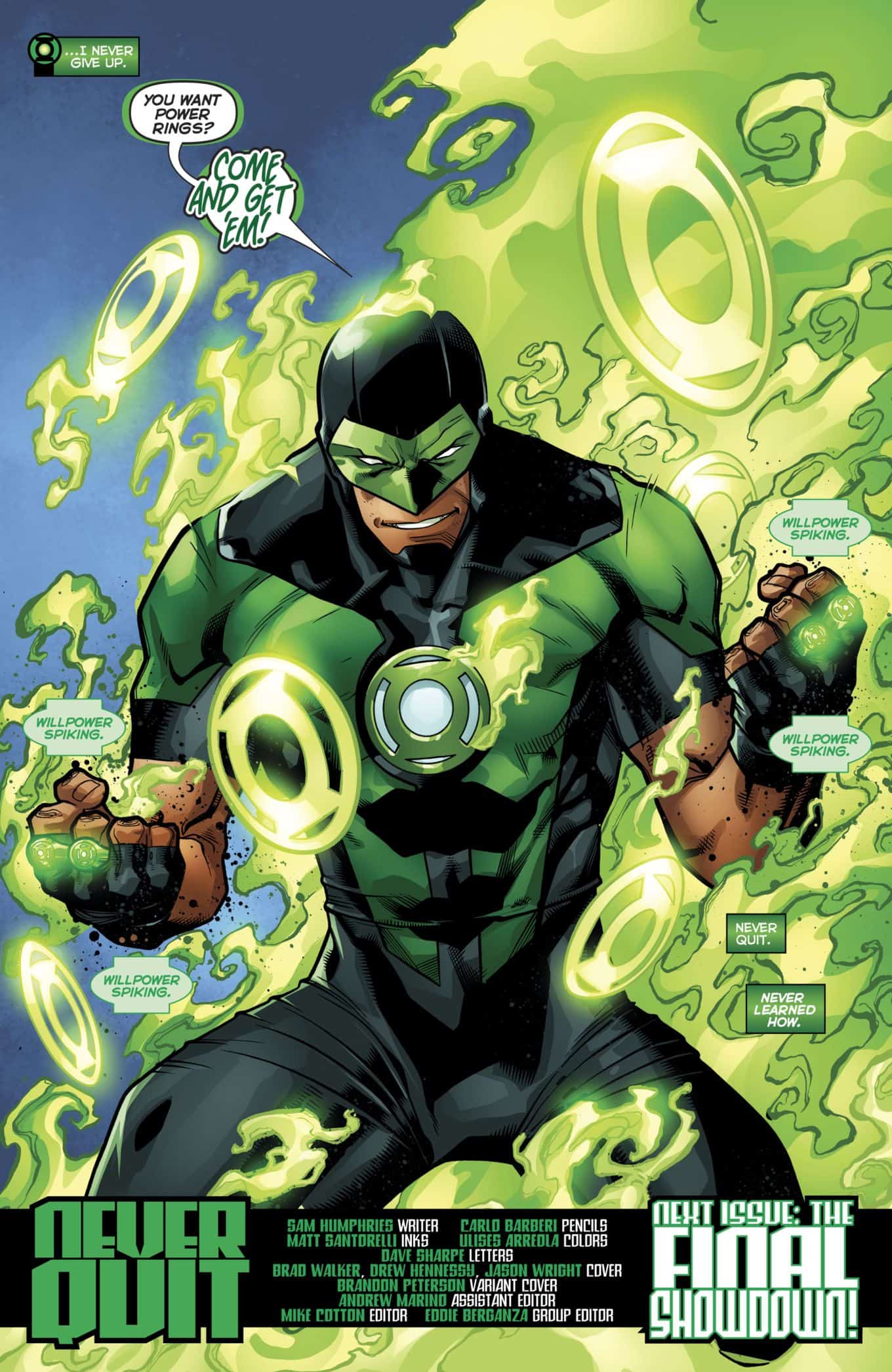 With that, let’s dive into Green Lanterns #31. 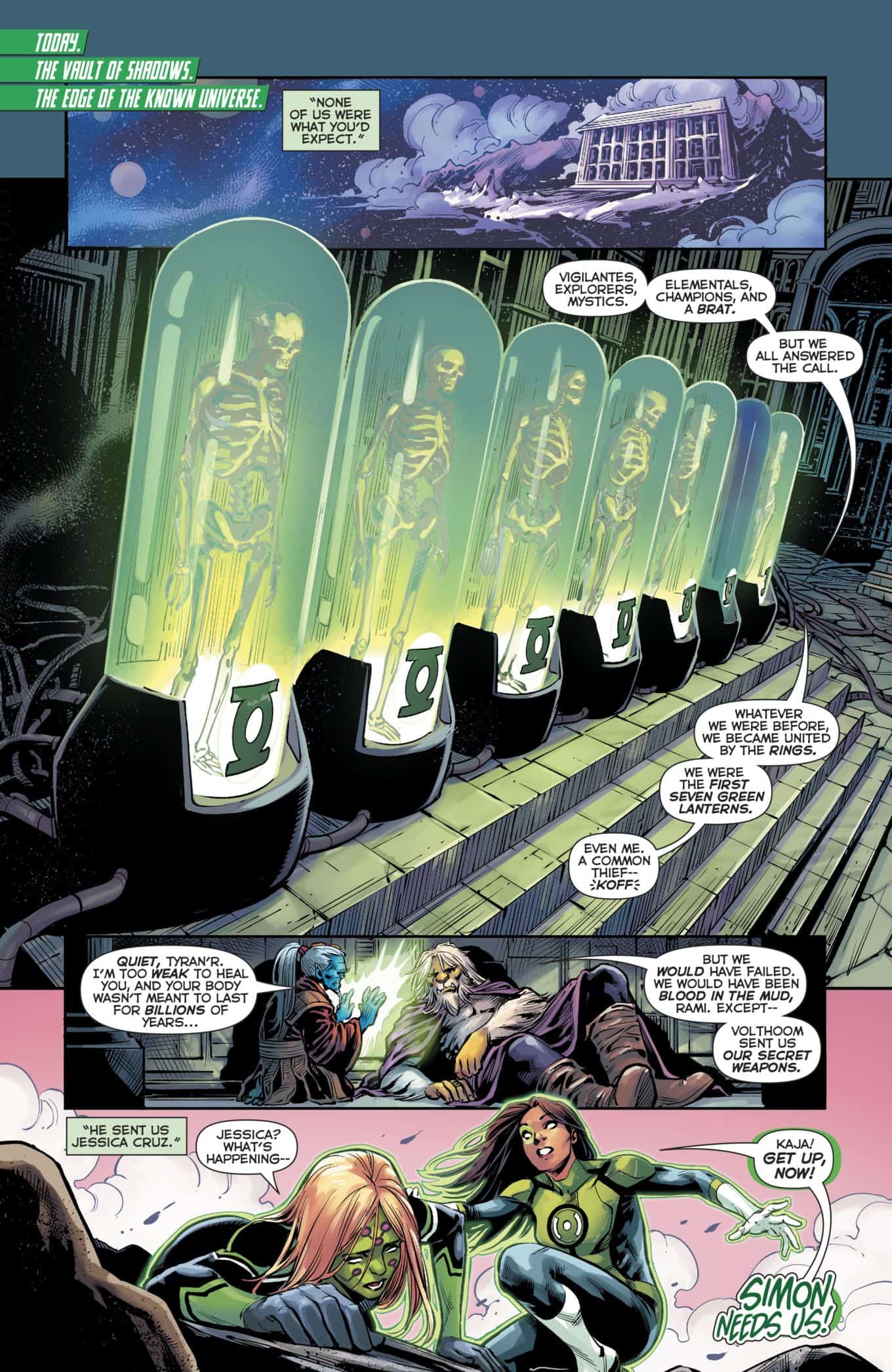 …a super-charged Simon Baz vs. Volthoom. 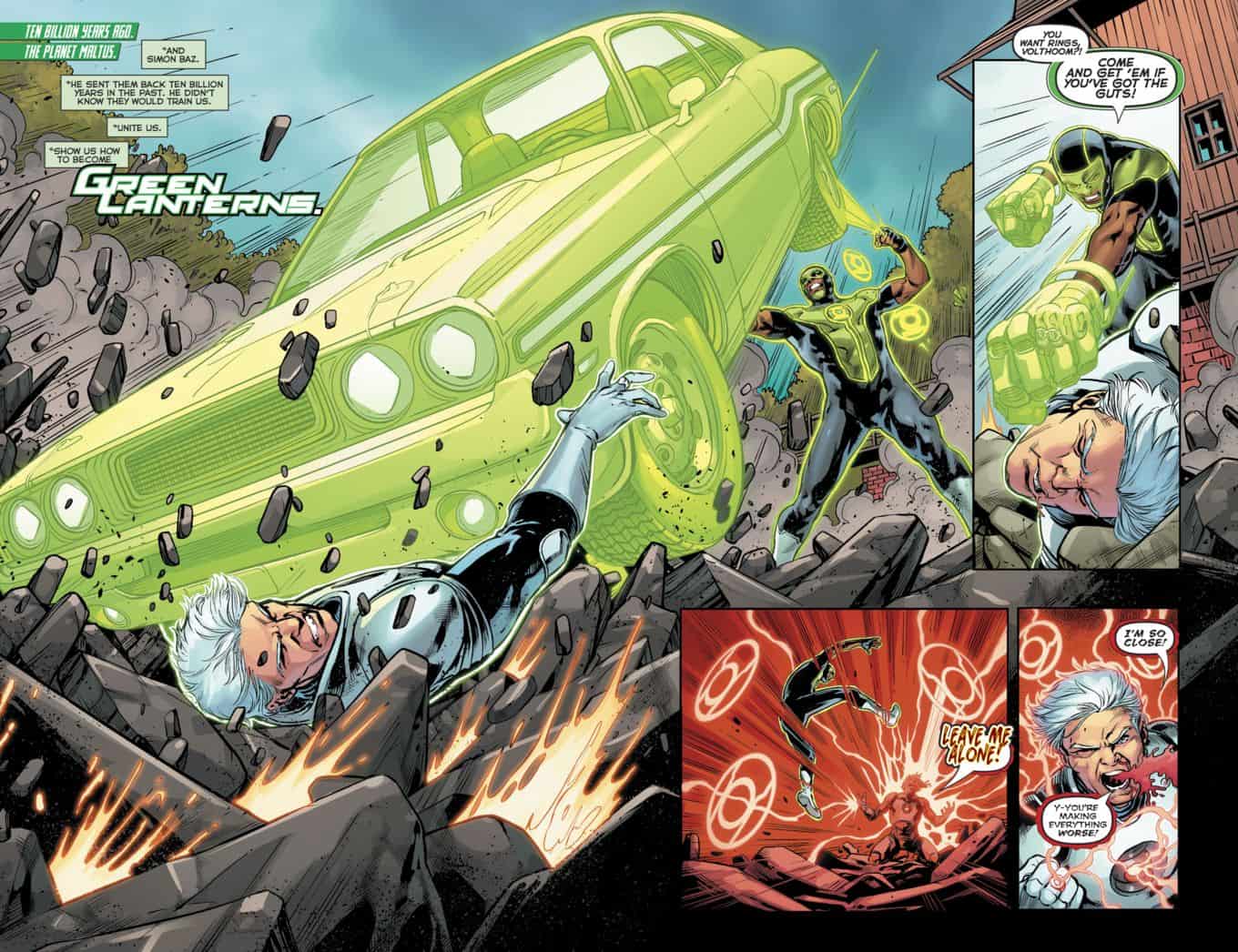 Dox indeed attacks as does…

…Z’Kran Z’Rann of Mars who is fatally beaten by Volthoo, yet still pleads for Jessica Cruz to help Volthoom from being consumed by the emotional spectrum which has corrupted him. 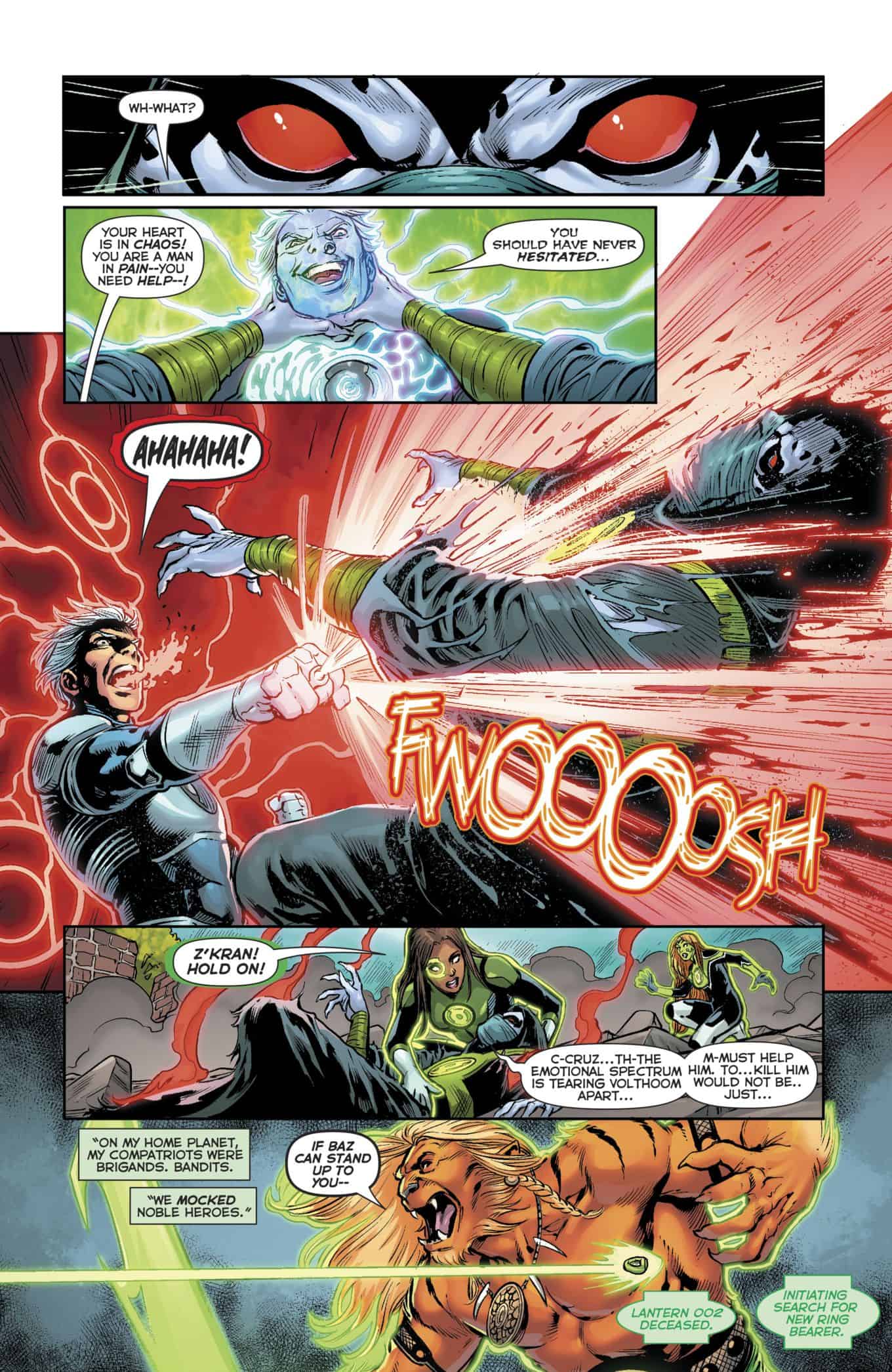 Simon Baz springs an impossible shape on Volthoom which is seemingly impossible to escape. Volthoom just wants to go home and is mesmerized when… 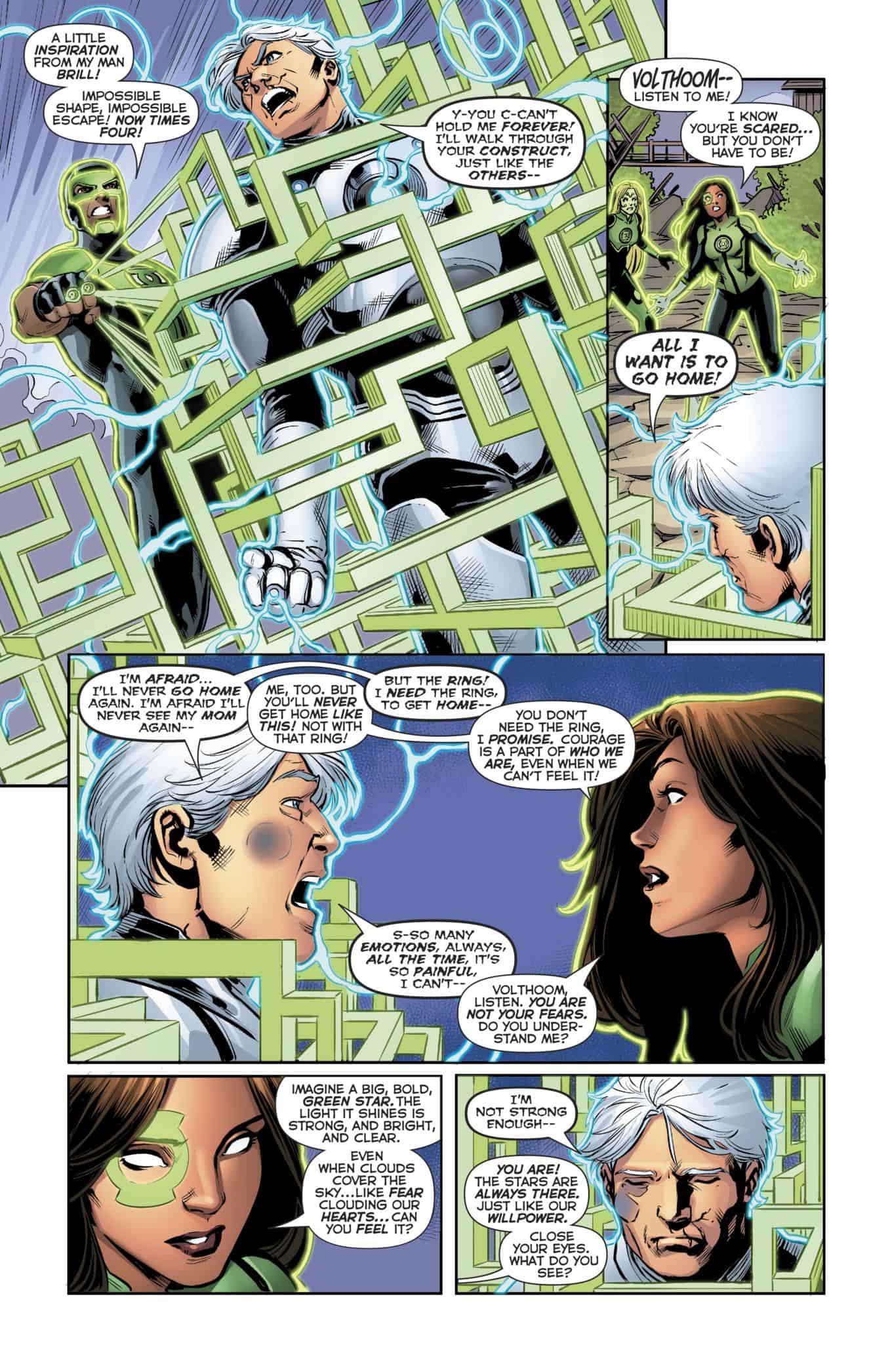 …his willpower manifests as the Emerald Sun?! 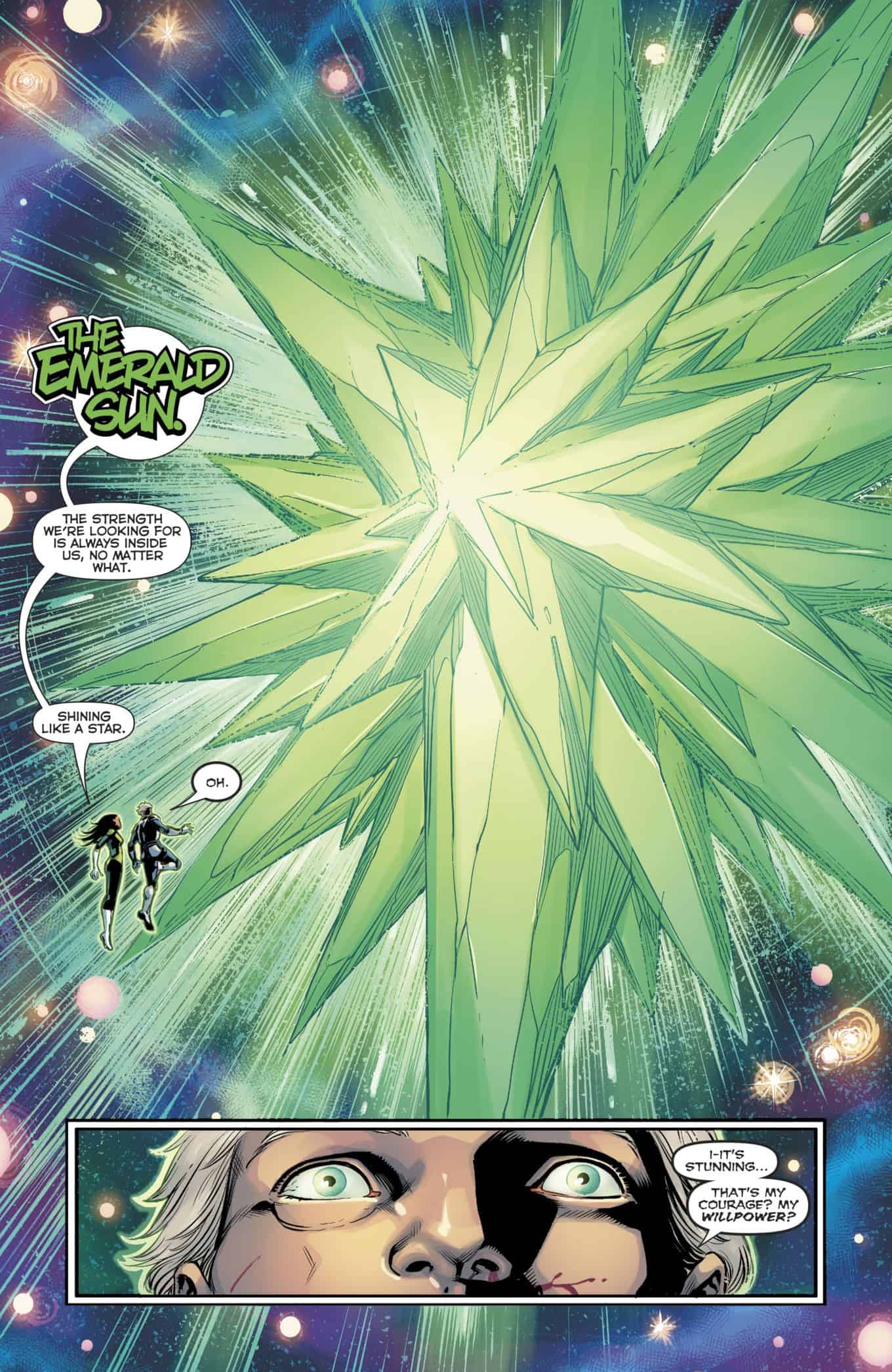 He just wants to go home and seems to have shaken the corrupting influence of an unfiltered emotional spectrum, but the Guardians of the Galaxy pounce and essentially arrest him and remove the Travel Lantern ring from him.

We then learn what happened after Simon and Jessica returned to past. The shrine of the First Green Lanterns was built and we know that Tyran’r of Tamaran lives to the present, but what about Kaja Dox of Yod-Colu? Well she becomes a scientist, has kids whose birthline is likely co-opted by Brainiac? Likely ancestors are Vril Dox (Brainiac Two of L.E.G.I.ON. and R.E.B.E.L.S. infamy), Pran Dox (Brainiac Three), Kajz Dox (Brainiac Four) and Querl Dox (Brainiac Five of the Legion of Super Heroes [LOSH]).

It seems that in the present, the older Volthoom relinquished his hold on Rami returning him to control of his own body. A gesture either signifying his work was done or due to Jessica and Simon changing the past and him feeling like he owes them something.

At the same time, Tyran’r decides to retire and his ring chooses… 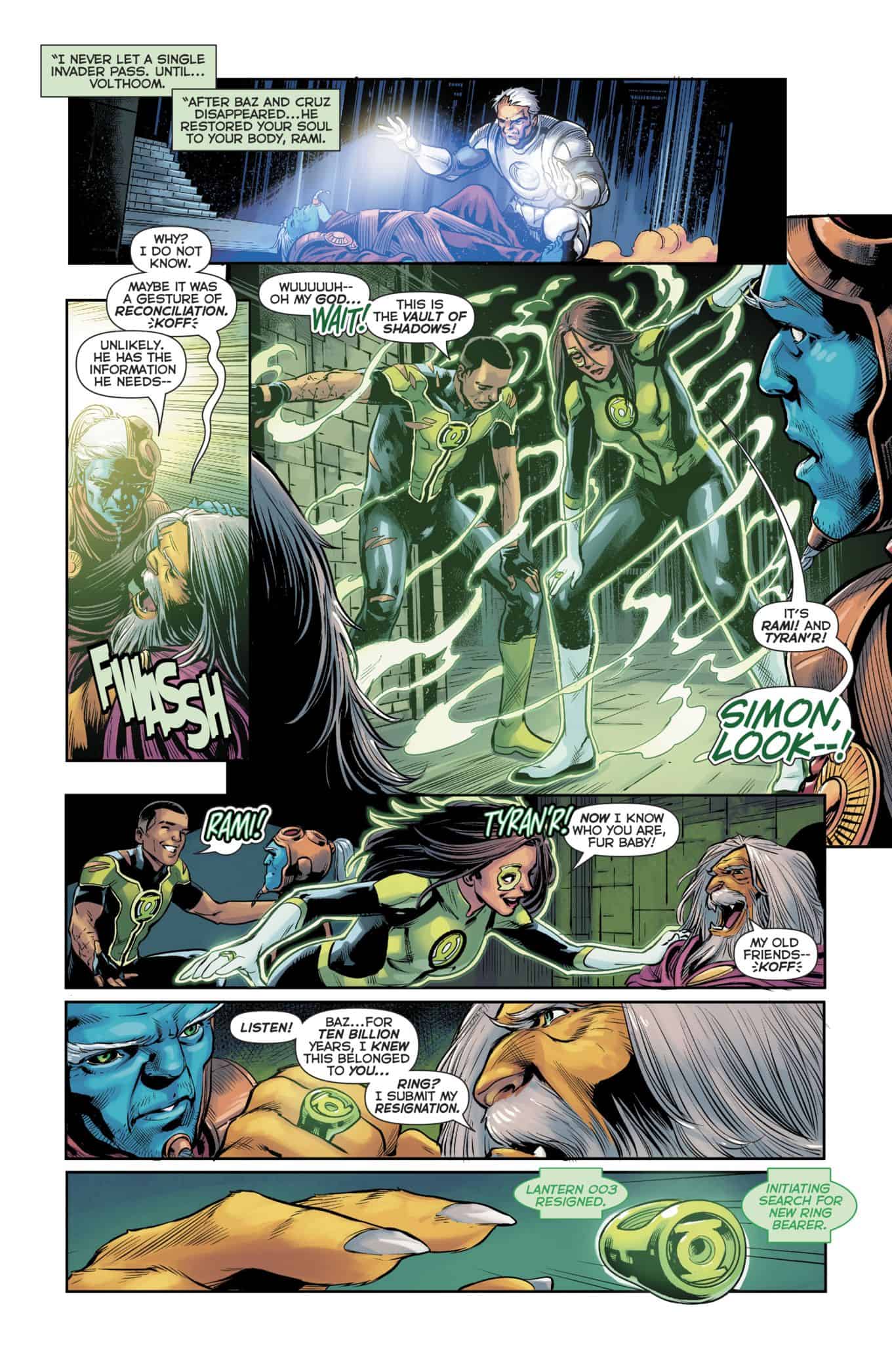 …Simon Baz. Now Jessica Cruz and Simon Baz each have one (1) of the seven (7) First Green Lantern rings. 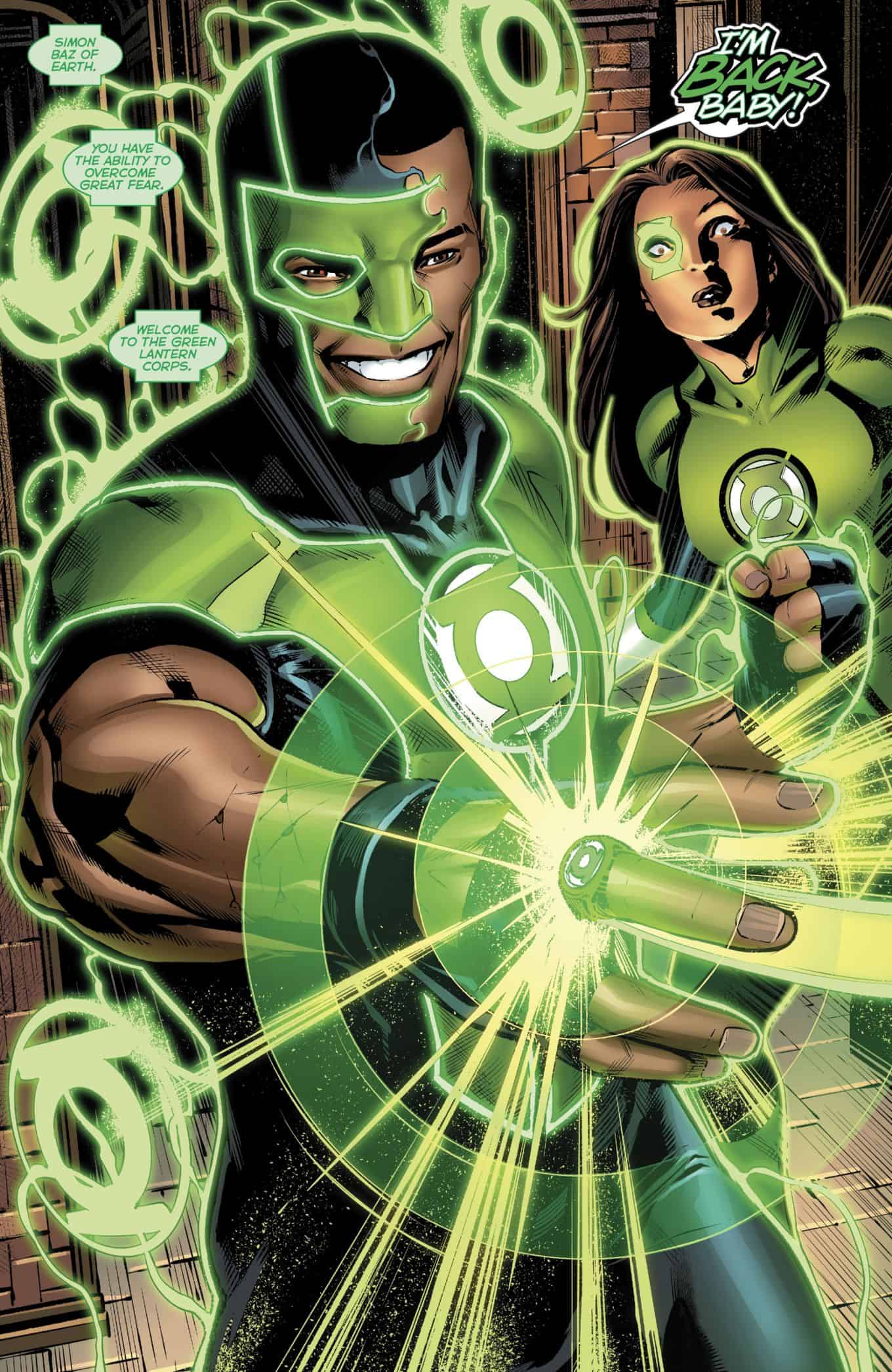 As a result of giving up the ring, it appears Tyran’r would become the seventh and final of the First Green Lanterns deaths, but Rami channels the power of Simon and Jessica’s rings to save him and give him at least 1,000 more years of life.

Rami enlists Tyran’r to help him find the the 5 remaining First Green Lanterns rings before Volthoom does, but expects that 1 or more may end up on Earth so… 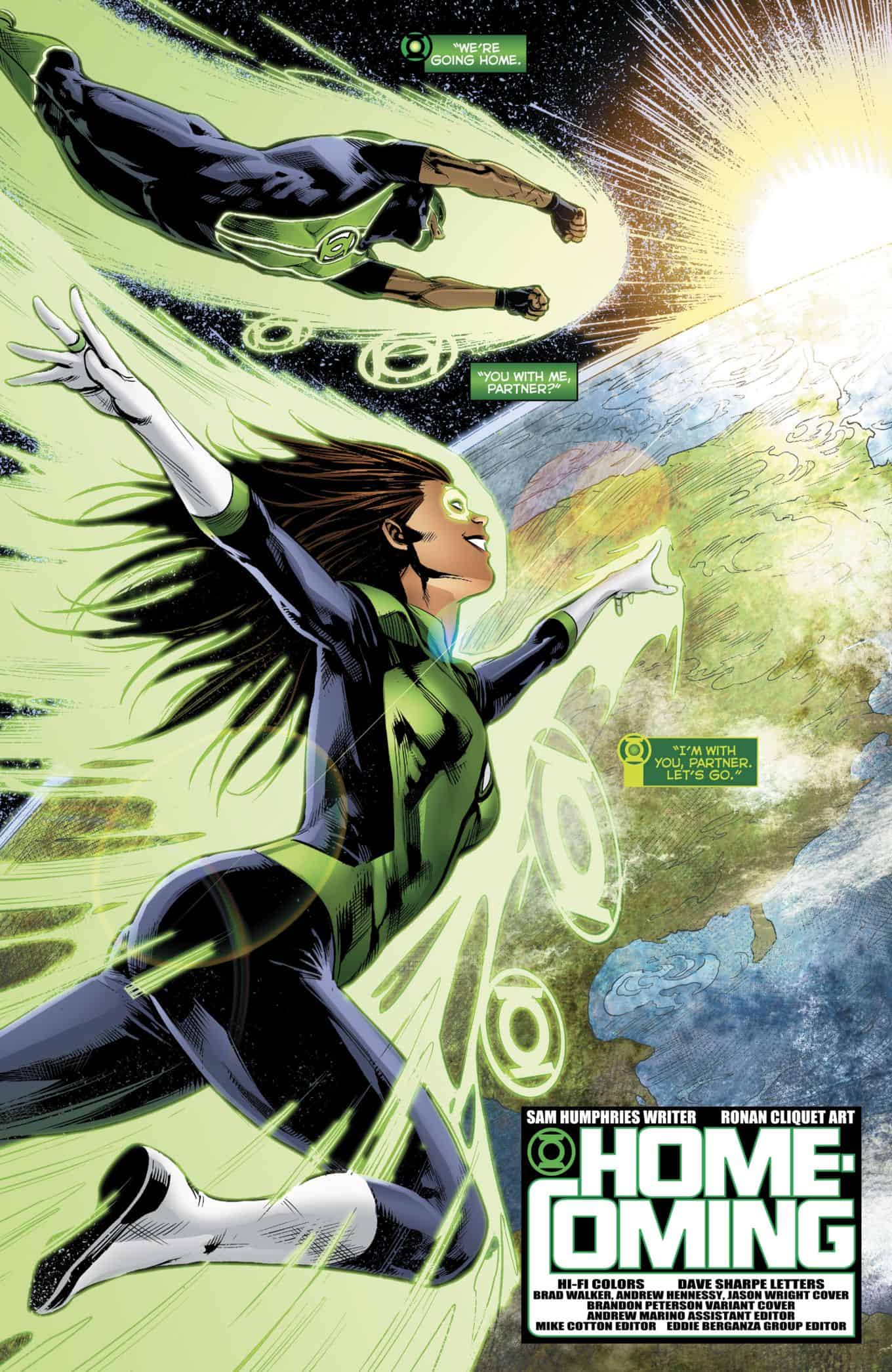 What an amazing arc and broader story that has been built up for a year by writer by Sam Humphries. This has been epic sci-fi tale that added depth the emotional spectrum lore and even made sense of Volthoom a being that powered Earth 3’s Power Ring character of the evil Justica League called the Crime Syndicate from the Silver Age. Humphries made Volthoom a singular entity in the multiverse and it all worked.

I’m so sad to see him leaving this book, but I’m eager to see where he takes Nightwing (spoilers here) when he takes the reins of that book in December 2017. I guess Nightwing is on my pull list again.

Ronan Cliquet interior art served Humphries’ story well. The main cover by Brad Walker is gorgeous, and the best so far in this run despite me liking every cover he’s done on this series, while the variant cover by Brandon Peterson was stunning.