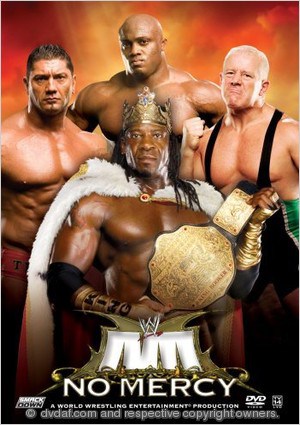 Michael Cole and JBL are on commentary.

~MATCH #1~
Matt Hardy defeats Cruiserweight Champion Gregory Helms at 13:15 in a non-title match. These two have known each other for years, long before they got to WWE, so there shouldn’t be much of a feeling out process here. Both men show off plenty of offense and counters, emphasizing how well they know each other. Cole and JBL really hammer home how long Helms has been the Cruiserweight Champion, but since he often went months without defending the title on TV or PPV (present match included), it’s really not that impressive. Both men keep up a fast pace, but it’s Hardy that’s able to hit the big move, in this case a Twist of Fate, to get the pin. This was all a little pointless in the grand scheme of things, but a fun opener nonetheless. I mean did they really have no Cruiserweights for Helms to feud with?
Rating: ***¼

~MATCH #2~
WWE Tag Team Champions Paul London & Brian Kendrick (w/ Ashley) defeat Idol Stevens & KC James (w/ Michelle McCool) to retain the titles at 9:45. London and Kendrick have been the Champions since 5.21.06, and this is their fifth defense. The champions start off hot, but McCool interferes to give her Teacher’s Pets the advantage. Idol and Stevens isolate London for several minutes, but Kendrick gets the hot tag and all hell breaks loose. McCool continues to interfere so Ashley finally decides to stop her. That turns the momentum back to the Champions. Kendrick hits James with Sliced Bread #2, and then London hits a Shooting Star Press off his partner’s back, and Kendrick gets the pin. Stevens and James were pretty non-descript, but London and Kendrick carried them to a fun match here.
Rating: ***

~MATCH #3~
MVP defeats Marty Garner at 2:38. This is the debut of the MVP character, and he’s facing a mystery opponent. I think this is actually pretty brilliant for the MVP character to face a jobber in his debut after the massive build up. It’s a great way to build heat. MVP dominates the poor scrub and puts him away in short order with the Play of the Day. Nothing match, good angle.
Rating: ½*

~MATCH #4~
United States Champion Mr. Kennedy defeats Undertaker by disqualification at 20:43 in a non-title match. Kennedy has no problem bringing the fight to his more experienced opponent, but Undertaker quickly takes over and starts wearing Kennedy down. Momentum swings back and forth, with Kennedy looking fairly strong against the Phenom, all things considered. Kennedy uses a traditional piledriver and covers but only gets two. He continues to look strong, battling Undertaker move for move. After a Kenton Bomb only gets two, a frustrated Kennedy goes outside the ring to grab his United States Title belt. Undertaker gets a hold of it and waffles Kennedy with it to draw the disqualification. Okayish but dull match, stupid finish.
Rating: **¼

~MATCH #5~
Rey Mysterio defeats Chavo Guerrero (w/ Vickie Guerrero) at 12:12 in a Falls Count Anywhere Match. This is a heated issue over the legacy of Eddie Guerrero. Both men start out with fisticuffs and quickly take it to the floor and up by the entrance structure. They fight all around the arena, brawling their way through the fans. In the end Mysterio climbs up onto a railing and delivers a cross body block to get the pin. They made good use of the stipulation here and really made it feel like they were fighting over something personal, so good on them.
Rating: ***½

~MATCH #6~
Chris Benoit defeats William Regal at 11:25. This is Benoit’s return after five months off. They chain wrestle to start, aggressively, of course. It doesn’t take long for strikes and German Suplexes to follow. Benoit uses headbutts and busts Regal open. Regal comes back with a DDT on the ring apron. The chops Benoit peels off in this match are just brutal. Regal is certainly no slouch in the aggression department. A reversal exchange ends with Benoit locking in the Crossface and Regal taps out immediately. That was awesome stuff between two guys that didn’t mind laying in their shots. The brutality was there, the expert technical wrestling was there, and a nice clean finish was there.
Rating: ****

~MATCH #7~
World Heavyweight Champion King Booker (w/ Queen Sharmell) defeats Batista, Bobby Lashley, and Finlay in a Fatal Four Way Match to retain the title at 16:55. Booker has been the Champion since 7.23.06, and this is his fourth defense. Booker and Finlay decide to work together, despite their pre-match dissension. The action is fast and furious from the start here, as things tend to be in Fatal 4-Way matches. It doesn’t take long for Finlay to turn on Booker and reveal that he’s out to win the Championship. Little Bastard interferes to help Finlay by delivering a low blow to Lashley. All four men dish out plenty of punishment, and there’s always someone around to break up pin of submission attempts. A bloody Batista hits everyone with a spinebuster and then flattens Finlay with the Batista Bomb. Lashley takes Batista out with a Spear, and then Booker crawls over to cover Finlay and steal the pin. Solid action here from all four men and it never got boring.
Rating: ***¼

A2Z Analysiz
This show looked like garbage on paper, but it actually turned out to be rather enjoyable. Five of the seven matches are three stars or higher, and the squash match was pretty ingenious (though perhaps I’ve been desensitized by not paying for each individual show in the Network era). It’s not a blow-away show by any means, but at only two-and-a-half hours it’s a breeze to get through.