During the graduation ceremony at the North Carolina School of the Arts, we were fortunate to have Kathy Bates as our guest. I still have memories of her giving a smile as I walked forward to receive my diploma. She was probably not used to seeing someone graduate wearing a lion suit. It was an art school so you could go beyond black cap and gown. Although nobody grasped that the outfit was a reference to David Bowie’s “Joe the Lion.” But at least it made her happy. In the short time I got to chat with her during the weekend, you could sense that Kathy Bates understands how to nurture an artist and coax only the best out of them. Of course her best example of this talent is found in Misery based on the Stephen King novel. She won the Oscar as a woman who runs the most horrifying writer’s retreat. Now the movie is receiving the Scream Factory with new bonus features. Here’s the press release from Scream Factory: 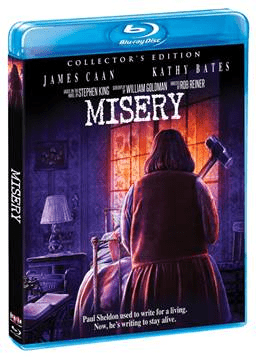 Novelist Paul Sheldon doesn’t remember the blinding blizzard that sent his car spinning off the road. He doesn’t remember being nursed back from unconsciousness. But he will never forget Annie Wilkes.

James Caan and Academy Award® winner* Kathy Bates star in the bone-shattering thriller Misery, adapted from the novel by Stephen King. As Paul (Caan) recuperates from his injuries in the secluded cabin of his benefactor Annie (Bates), he begins to discover that beneath the seemingly kind and naive exterior of his self-described “number one fan” lurks a mind that is cunning, unhinged, and bent on keeping her favorite writer as her personal prisoner for the rest of his “cock-a-doodie” life … and Sheldon must engage his savior-turned-captor in a battle of wills that will push them both to the brink.

Adapted by two-time Oscar®-winning** screenwriter William Goldman and directed by Rob Reiner, Misery is considered by critics and fans (number ones and others) to be among the greatest horror-thrillers of all time. Revisit this classic tonight with your friends … after all, Misery loves company.

*1990: Best Performance by an Actress in a Leading Role, Misery
**1969: Writing, Screenplay Based On Material from Another Medium, Butch Cassidy and the Sundance Kid; 1976, Writing, Story and Screenplay Based on Material Not Previously Published or Produced, All The President’s Men