We start things off with a BFG hype video showcasing the Taya vs. Rosemary match. At BCW, we see Allie and Rosemary face KC Spinelli and Sienna. The heels dominate Allie for a bit until Allie hits a crossbody. Rosemary hits a crossbody off the top onto both heels. KC takes her down and lands a series of elbows for 2. Sienna comes in and hits Ryback’s finish on Rosemary, who does her zombie situp. Double-down after they each high kick each other. Allie runs wild on KC and dropkicks her butt in the corner. Sienna accidentally kicks her and then Sienna eats a codebreaker from Allie and a German suplex from Rosemary. Not sure why you’d job Sienna and not KC, who is making her debut and is in another company, but okay.

We get a recap of the Moose vs. Lashley feud, with a Dan Lambert promo over everything making it amazing. Dan Lambert comes in with ATT and says he and his team will destroy Impact and pro wrestling. A recap airs of Joseph Park and Grado’s issues – so to recap, their US visa feud will be resolved in Canada. Moose and Okabayashi face Nakajima and Kitamaya. Kitamiya is very much like Mr. Saito, only skinny and with a shaggy beard. Moose eats some stiff kicks from Nakajima and Moose takes out Nakajima with the Okada dropkick. Heels double bulldog Okabayashi, but he slams Kitamiya and beats him with a superfly dive. 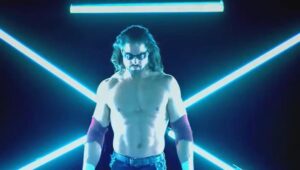 Sting vs. Angle from BFG 2007 is shown via the Pluto App. Eli insults Konnan’s group for losing their belts, but says they should take out their enemies together. We get an OVE vs. LAX recap, showing just how little has really been done for it all. Trevor Lee says he’s the face of the division and the company. Lee has his goons and comes out to face Dezmon Xavier. Sonjay Dutt, Garza Jr, Petey Williams, and Matt Sydal. Sydal shines with a nice shining knee in the corner, but there’s no real flow to this – it’s just everyone trading big spots. Lee and Sydal are awesome together, and Dutt is fine as glue for it, but not a real shining star. Petey hits the Destroyer, but Xavier breaks up the pin. Xavier hits the double jump Pele on Lee to win. That is such a goofy finish.

Team AAA vs. Team Impact/GFW/TNA is hyped up. Gail cuts a promo about this being her final BFG and her being the first knockouts champion at BFG a decade ago. The Eli vs. Johnny Impact feud is recapped. LAX comes down and Eli does Eli-centric gang signs. Okay, that’s great. Faces come out for a big brawl to start things off. The heels attack everyone and it’s really a giant brawl for a while without much of a match structure. Impact beats Santana with a sunset flip and we get more brawling. Eli and Adonis cut the ring up with a box cutter and hit the Gravy Train on the exposed wood. Yes, the WORLD CHAMPION’S FINISHER is called the Gravy Train. Literally any name on Earth would have been better. Well, at least the ring being cut up was memorable.