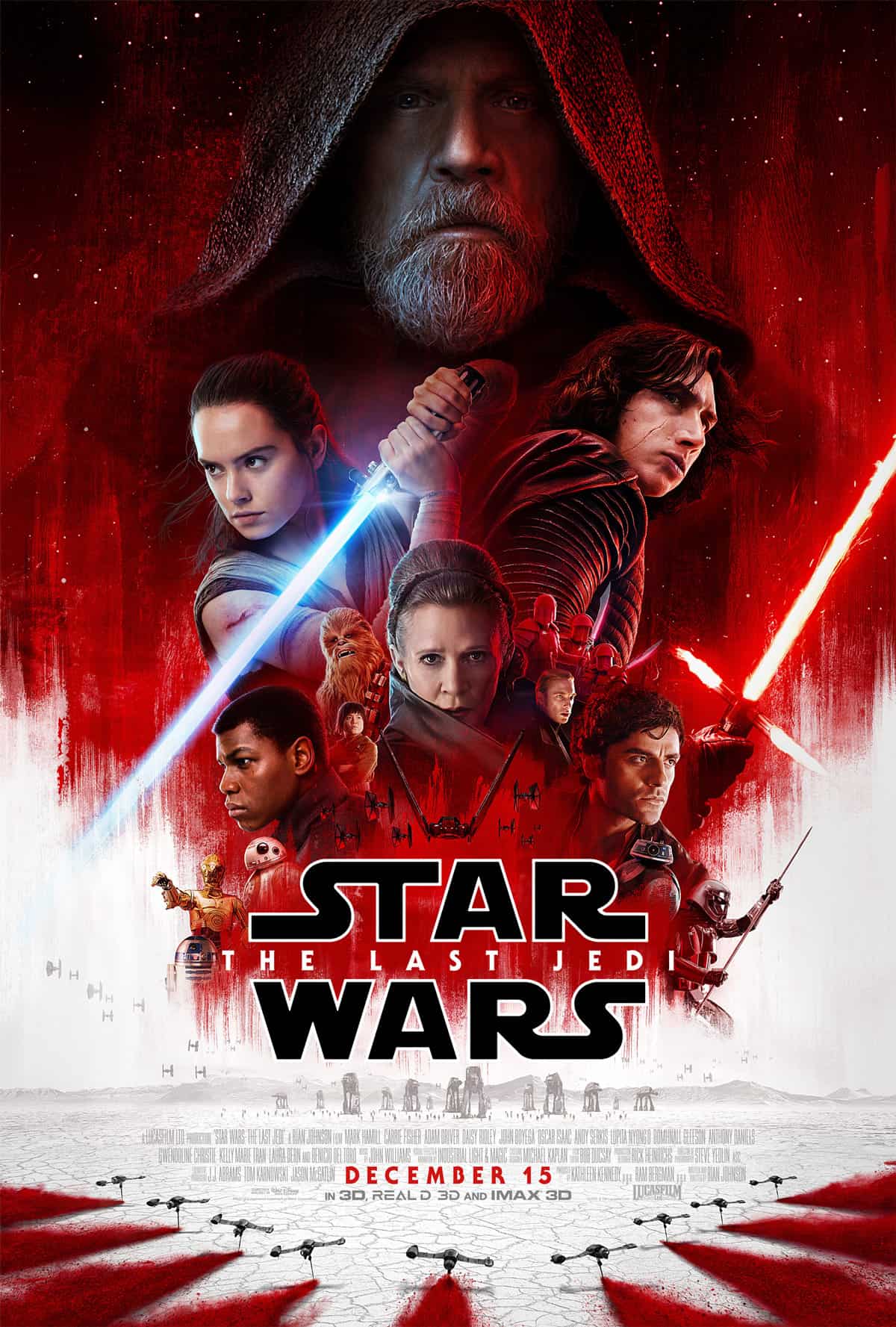 There’s just something about the opening moments of a

Star Wars movie. The quiet “a long time ago…,”, the iconic John Williams music, and the moment that the title crawl begins. Now that we’re destined to get a new Star Wars movie every year from now until forever, that impact may at some point wear off, but not yet. The feeling of seeing Episode VIII go across the screen is one that really is still one that’s as every bit as powerful as finally seeing Episode VII appear in the title crawl two years ago.

The Force Awakens ended on a cliffhanger, so for the first time we get a Star Wars movie that picks up pretty much right where the last one left off. The Starkiller base has been destroyed but so has the republic as well as any military presence that the republic may have. The First Order is now the de facto biggest power in the galaxy, and General Leia’s Resistance is even more Rebel Alliance 2.0 than before if that’s possible. General Hux ( Domhnall Gleeson) opens up the movie trying to stop an evacuation of the Resistance. In the opening sequence Poe Dameron (Oscar Isaac) tries to attack and destroy the far outpowered First Order Dreadnaught ship, and while his squadron is ultimately successful in taking out the bigger ship, the victory comes a cost that possibly puts the remains of the Resistance in even greater danger than they were before.

Meanwhile we pick up with Rey’s (Daisy Ridley) story right where we left it off, with her holding out Luke’s lightsaber on the edge of a cliff to the long sought after Jedi master. Luke (Mark Hamill) , however is not the idealistic farm boy from A New Hope, or even the war hero savior of the Jedi that he was at the end of Return of the Jedi. The failure of Ben Solo falling to the dark side and destroying Luke’s attempt to return the Jedi to the galaxy have turned the former Jedi into a recluse who has intentionally shut himself off from the galaxy and even from the Force itself. Rey is trying desperately to bring Luke back to the Resistance who desperately need a glimmer of hope in this dark hour.

Kylo Ren (Adam Driver) is also given a bigger role in this movie, and a lot more screen time as he and Rey find themselves unexpectedly connected by the force and able to communicate with one another, something that neither one of them is particularly fond of. The Last Jedi spends more time delving into Kylo Ren as a character as well. There are a lot more quiet, character building moments for Kylo in contrast to The Force Awakens where he served as what essentially amounted to the new Darth Vader big bad for the bulk of the movie. Kylo Ren’s forced conversations with Rey through the Force serve as interesting character moments for both of them, as we get to see both actors really develop three dimensional characters that start to drive the emotion of the movie.

It’s honesty hard to say if a Star Wars movie is simply a good movie or a bad movie. Star Wars is such an ingrained part of our culture now that when a new movie comes out it’s not enough to say whether or not it’s good. No, you have to discuss how does it compare to the original movies. Is it at least better than the prequels? How well does it fit into the mythos established in the previous movies? Does it respect the “rules” of the Star Wars universe the way it should? Doe it feel properly Star Wars? And with this movie in particular, how does The Last Jedi continue the goodwill that The Force Awakens achieved while addressing the criticism of the previous movie.

It’s safe to say that those who were complaining about how The Force Awakens  was just a remake of A New Hope can’t really say the same thing here. There are a few comparisons to be drawn between The Last Jedi and The Empire Strikes Back. Rey does search for a Jedi master in a forgotten corner of the galaxy. And there is an attack on a Rebel base (sorry, Resistance base) that takes place in on a white covered planet, though the movie makes it clear that the planet is covered in salt, not snow this time around. But even with these threads that connect this movie to The Empire Strikes Back, it’s still a very different movie. The Last Jedi has its own story to tell, and it takes several unexpected turns throughout the story. The Last Jedi, surprisingly, may not be the easiest movie to watch. Star Wars movies are often called popcorn flicks, easy to consume, lighthearted, fluff entertainment. The Last Jedi instead tackles a few heaver themes head on. There is a ton to unpack with this movie and unfortunately, a lot of that can’t be done while keeping the review spoiler free, but it’s safe to say that this might feel like the “newest” and “most different” Star Wars movie that we’ve seen in awhile.

That doesn’t mean that The Last Jedi does “feel” Star Wars enough. Make no mistake this is still very much a Star Wars movie. The ship and planet designs feel like they’re either right out of, or a natural evolution of the settings of the original trilogy. The way the film is shot and edited feels like a Star Wars movie including a few wipe transitions between scenes. The John Williams score for The Last Jedi is probably even better than his work on The Force Awakens as it feels like he’s gotten back into the Star Wars grove after the first movie back and now he’s delivered a score that feels like the genuine next step for a Star Wars soundtrack.

It feels like Disney is still trying to figure out exactly what to do with the Star Wars franchise. There have been three different cases so far where a director was announced for a project only to be let go before completing, or in some cases even starting filming. The Force Awakens and The Last Jedi, while both very good movies, serve two very different purposes. And with rumors of a different spin off movie popping up every other month or so, Disney still seems to be playing with where they want this series to be. But this movie is a safe, strong hit out of the park, and, along with its predecessor, provides a powerful base to continue to build the franchise on.