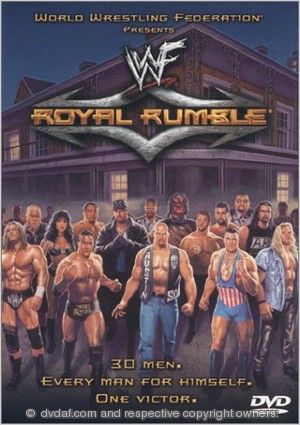 ~SUNDAY NIGHT HEAT MATCH~
Lo Down (D’Lo Brown & Chaz, w/ Tiger Ali Singh) defeat Kaientai Taka Michinoku & Funaki) at 1:51. The winners here get to select one member of their team to enter the Rumble match. Chaz wastes no time attacking Funaki and away we go. JR is all over the place on commentary here, calling Chaz D’Lo and Lo Down Kaientai. The action is fast-paced here, and Lo Down gets it together put Funaki away with a double-team powerbomb. They did about as much as they could in less than two minutes.
Rating: *

~MATCH #1~
The Dudley Boyz (Bubba Ray Dudley & D-Von Dudley) defeat World Tag Team Champions Edge & Christian at 9:58 to win the titles. Edge & Christian have been the Champions since 12.21.00, and this is their first defense. Bubba and D-Von waste no time going after the Champions, eager to win the titles for a second time. Edge and Christian have been Champions five times at this point. The Champs survive the early onslaught and isolate D-Von in their half of the ring. Eventually D-Von makes the hot tag and Bubba comes in a house afire. The Dudleys hit all their signature spots and the referee loses control. Edge and Christian get cocky and try to do the Wazzup but Bubba counters it. One 3D later and the Dudleys win the Tag Team Titles. This was a hot opener, with well-paced action to get the crowd going, and a nice clean finish to boot.
Rating: ***½

~MATCH #2~
Chris Jericho defeats Intercontinental Champion Chris Benoit at 18:43 in a Ladder Match to win the title. Benoit has been the Champion since 12.10.00, and this is his fifth defense. These two rivals are very familiar with each other and thus they waste no time in getting the fight underway. They work in all kinds of cool spots with the ladder, and early on Benoit goes for the suicide dive but gets bashed in the face with a chair in a very famous spot. Both men continue to punish each other with the ladder, including another famous spot with Jericho trapping Benoit in the Walls of Jericho on top of the ladder. The pace here is just insane. Benoit pushes the ladder over while Jericho is on it and goes to climb. Jericho comes back in with a steel chair and whacks Benoit twice with it, and then shoves the ladder over. That sends Benoit to the floor and it gives Jericho enough time to climb the ladder and retrieve the belt. What a fantastic match. This is definitely one of the greatest one-on-one ladder matches ever, with bunches of memorable spots, great build, and palpable hatred between two long-time rivals.
Rating: ****½

~MATCH #3~
Women’s Champion Ivory (w/ Steven Richards) defeats Chyna to retain the title at 3:27. Ivory has been the Champion since 11.2.00, and this is her eighth defense. She has Steven Richards with her. This is Chyna’s first ever shot at the Women’s Title. Chyna attacks right away and throws Ivory around the ring. This looks like it’s going to be a slaughter. Chyna clotheslines Ivory to the floor. They fight into the crowd and Chyna press slams Ivory back over the barricade. Back in the ring Chyna continues to dominate and Richards tries to interfere, only to get dumped to the floor. Chyna tries to do the handspring elbow but appears to re-injure her neck on the (ahem) impact. Ivory covers and gets the pin. Squash match, weak finish.
Rating: ¼*

~MATCH #4~
WWF World Heavyweight Champion Kurt Angle (w/ Trish Stratus) defeats Triple H (w/ Stephanie McMahon) at 24:18 to retain the title. Angle has been the Champion since 10.22.00, and this is his fifteenth defense. HHH controls a bulk of the early going, and he uses Stephanie’s interference wherever possible to help keep this advantage. He focuses on Angel’s left knee, which should help neutralize Angle’s suplex attack. Stratus tries to interfere to help Angle out, but Stephanie is there to attack her and the cat fight is on. Mr. McMahon swaggers out and breaks it up. The match basically ceases to exist for a few moments while Mr. McMahon tries to separate the two women. Late in the match the referee gets bumped on the floor, so there’s no one to count when HHH hits Angle with the Pedigree. Steve Austin takes the opportunity to run out and hit HHH with the WWF Championship belt, and then a Stone Cold Stunner. The work by Angle and HHH was pretty good, but the finish really made Angle look weak, and while the Stephanie/Trish altercation helped put heat on their feud, it very much distracted from the flow of this match.
Rating: ***

The Hardys work together to toss Buchanan out to get the ball rolling on eliminations. They also toss Faarooq out. Drew Carey is #5 as the Hardys eliminate each other, leaving him alone in the ring. Carey gets a few moments to himself, and then #6 sounds off and it’s Kane. Carey avoids getting destroyed, and Raven comes out to give Kane someone to actually fight. Snow joins the Rumble and it turns into a hardcore match, with weapons littering the ring. Saturn is next to continue the hardcore theme, and Blackman fits that bill as well. Sexay is next out and Kane makes short work of him. Kane eliminates Blackman, Snow, Raven, and Saturn in pretty quick succession. The longest reigning Intercontinental Champion of all-time, the Honky Tonk Man, is next. Honky tries to sing but Kane takes his guitar and breaks it over his head! Kane tosses Honky out. Lucky #13 is The Rock! Kane’s dominance ends, and Goodfather is the next man out and Rock eliminates him in about five seconds. Tazz is #15, representing the halfway point. He lasts about 10 seconds before getting tossed.

Bradshaw kicks off the second half. Albert is next, followed by Hardcore Holly. The crowd is getting a little restless waiting for another main event guy to show up. K-Kwik makes his Rumble debut, followed by Val Venis. European Champion William Regal is next, and his rival Test comes out next and quickly dumps him to the floor. The next entrant is the surprise return of the Big Show! He hasn’t been seen since August. Show easily dumps Test and K-Kwik. Show Chokeslams everyone in sight, but when he gets to The Rock he takes a kick in the nuts. Rock is able to knock Show to the floor, and everyone else is down. Show is angry and he pulls Rock to the floor as Crash Holly makes his way out. The furious Show Chokeslams Rock through the announce table, and Undertaker makes his way out to help his brother Kane clear the ring. The Brothers of Destruction don’t fight each other, and wait for the next entrant, who turns out to be Scotty 2 Hotty. Obviously, Scotty gets eliminated in short order. The glass breaks and the crowd loses their collective mind as “Stone Cold” Steve Austin is here! But before Austin can get to the ring, he’s attacked from behind by Triple H! Meanwhile, Rock gets back in the ring but is facing pretty heavy odds. HHH beats on Austin so badly that he busts him open. Billy Gunn comes out and manages to not get eliminated. Next up is a surprise entrant, the WCW Hardcore Champion Haku! We know that Rikishi is #30, and when he makes it out the remaining men in the match are himself, Haku, Undertaker, Kane, Billy Gunn, The Rock, and Steve Austin.

Rikishi is in no hurry, and Austin meets him in the aisle to start the fight! Austin finally gets in the ring and quickly eliminates Haku. Rikishi blasts Undertaker with a superkick to eliminate him. He goes for a Banzai Drop but Rock delivers a low blow and dumps him to the floor. That leaves Austin, Rock, Gunn, and Kane as the final four. Austin gets rid of Gunn while Rock and Kane do battle. Rock and Austin end up face to face, and the crowd goes nuts when they start fighting. While that’s going on, Kane sneaks up behind them and tries to eliminate them both but Austin is able to hang on! Kane and Austin are the last two left. The Big Red Monster brings a chair in the ring and tries to use it, but Austin thwarts him and hits a Stone Cold Stunner! Austin levels Kane with the chair three times and then clotheslines Kane to the floor to win the Rumble! This is another great Rumble, with an awesome early sequence, a relatively hot middle thanks to Kane and Rock, and a tremendous finishing sequence. The added surprise of Big Show, and the interference from Triple H both helped give this match legs. I love this Rumble.
Rating: ****¼