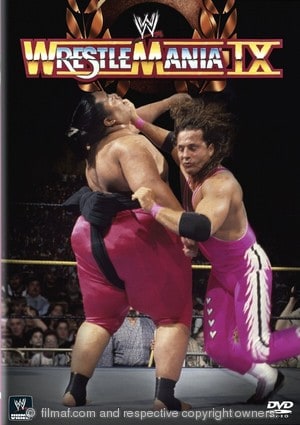 For a complete and easy-to-navigate archive of my WrestleMania DVD reviews, please visit World Wrestling Reviews.

Jim Ross, Bobby Heenan, and Randy Savage are on commentary.

~MATCH #1~
Tatanka (w/ Sensational Sherri) defeats Intercontinental Champion Shawn Michaels (w/ Luna Vachon) via countout at 18:13. Michaels has been the Champion since 11.14.92, and this is his fifth defense. Tatanka has been undefeated since 2.1.92. Both men try to set the tone early on, with Tatanka using high energy offense and Michaels trying to slow things down with holds. Tatanka targets Michaels’ arm and shoulder area. They fight back and for quite a while, both in and out of the ring. Late in the match they fight back on the floor, and Michaels trips the referee because he’s a coward. Back in the ring Tatanka hits The End of the Trail, but the referee has apparently counted Michaels out. I thought it would be a disqualification, but the result is the same – Tatanka wins, but Michaels keeps the title. This may be the best singles match Tatanka ever had in WWE. They had good chemistry and worked a good pace to keep the crowd into it the whole way through. Yes, the finish was cheap, but it was neither time to take the title off Michaels or to end Tatanka’s streak, so I see why it had to go down like that.
Rating: ***¼

~MATCH #2~
The Steiner Brothers (Rick Steiner & Scott Steiner) defeat The Headshrinkers (Fatu & Samu, w/ Afa) at 14:22. Scott and Fatu start it off and it’s a slugfest from the get-go. When Rick and Samu tag in it’s more of the same. The Headshrinkers take the first sustained advantage when Fatu goes for a stun gun on Scott but ends up dropping him all the way to the floor. Afa interferes when he can. Scott takes quite a beating before avoiding a headbutt from the top rope. Tags are made, and Rick is a house afire. The Headshrinkers cut him off and go for a Doomsday Device, but Rick catches Samu and powerslams him out of midair. Awesome spot. Scott gets a tag and he’s able to land the Frankensteiner on Samu to get the pin. Solid tag team action there with a couple of memorable moments.
Rating: ***

~MATCH #3~
Doink defeats Crush at 8:28. Crush dominates from the start, at least putting over that this was indeed a heated feud. Doink fights back and hits a nice piledriver, back in the days when such things were allowed. When Crush makes the comeback, Doink goes outside the ring and tries to crawl underneath. Crush will allow no such thing. He locks on the Cranium Crunch but the referee gets bumped. Crush puts the Crunch on again, but a second Doink comes out from behind and hits Crush with the prosthetic arm. The referee wakes up and counts three. It was spirited, at least.
Rating: *¾

~MATCH #4~
Razor Ramon defeats Bob Backlund at 3:45. Backlund tries to use his superior wrestling acumen, but Ramon overcomes him with his size and power. When Backlund fires up and unleashes a flurry of late-1970s offense, Ramon counters with an inside cradle to get the pin. Weird style clash here and oddly short, but not terrible or anything.
Rating: *¼

~MATCH #5~
World Tag Team Champions Money Inc. (Ted DiBiase & Irwin R. Schyster) defeat The Mega Maniacs (Hulk Hogan & Brutus Beefcake, w/ Jimmy Hart) by disqualification at 18:27 to retain the titles. DiBiase and IRS have been the Champions since 11.1.92, and this is their fourth defense. The challengers start off hot, but the Champions have been here before, so they know how to slow down the pace. Beefcake plays the face-in-peril, which is perfect because his face is literally in peril and being protected by a mask. Hogan tags in and the Vegas crowd goes nuts. Money Inc. tries to bail and lose via countout, but the referee waives the countout rule, forcing DiBiase and IRS back to the ring. Money Inc. cheats to gain an advantage, working on Hogan in their half of the ring. After what feels like an hour, Beefcake gets the hot tag and he’s a house afire. A cheap shot puts the Champions back in control. Yadda yadda yadda, stuff happens, the ref takes a bump. Hogan nails both DiBiase and IRS with Beefcake’s mask, and Jimmy Hart turns his jacket inside out to reveal black and white stripes. Hart counts the three and awards the Tag Title to his guys, but a real referee comes out and disqualifies the Mega-Maniacs. How dumb are Hogan and Beefcake to think a Jimmy Hart pinfall would hold up, even in the stupidity that is wrestling? That match was super dull and the finish was painfully stupid.
Rating: *

~MATCH #6~
Lex Luger defeats Mr. Perfect at 10:56. Perfect uses his technical prowess to keep Luger grounded. Luger powers up and focuses on Perfect’s previously injured back, always a cunning stratagem. They battle back and forth, trading control but nothing of note really happening. Luger traps Perfect in a backslide, and they’re so close to the ropes that Perfect’s feet basically get tied up, but the referee doesn’t see it and Luger gets the win. This was okay but never really clicked.
Rating: **¼

~MATCH #7~
The Undertaker (w/ Paul Bearer) defeats Giant Gonzalez (w/ Harvey Wippleman) by disqualification at 7:33. Gonzalez has the greatest ring gear ever. The monstrous Gonzalez slugs at Undertaker to start, and Undertaker shrugs him off and fires back. Gonzalez uses a choke now so Undertaker climbs up to the second rope and chokes him back, and Gonzalez hits a blatant low blow. The referee (Bill Alphonso) does nothing about it. Undertaker perseveres and hits Old School. Gonzalez shrugs that off and throws Undertaker around the ring some more. The fight spills to the floor and Gonzalez continues the abuse, ramming Undertaker into the steel steps. Back in the ring Gonzalez stays in control. Undertaker fights back and knocks Gonzalez down to one knee. The managers get up on the apron and Wippleman tosses Gonzalez a rag. Gonzalez knocks Bearer off the apron and then smothers Undertaker with the rag, which the commentators say has chloroform on it. Alphonso calls for the bell. That was pretty terrible, as Gonzalez could barely move and the finish was pretty stupid. They’re pretty lucky they went with the DQ finish here rather than put Gonzalez over, or else The Streak would never have existed.
Rating: ¼*

~MATCH #8~
Yokozuna (w/ Mr. Fuji) defeats WWF World Heavyweight Champion Bret Hart at 8:55 to win the title. Hart has been the Champion since 10.12.92, and this is his tenth defense. He takes it right to his massive challenger, and he does fairly well for himself in the opening minute or two. Yokozuna controls the bulk of the action, but the plucky Champion hangs on long enough to lock in the Sharpshooter! Mr. Fuji interjects himself and throws a handful of salt in Hart’s eyes. That’s all Yokozuna needs to cover Hart and win his first WWE Championship. That was actually a decent little match, but the finish would’ve been stronger if Yoko had dropped the leg or the elbow or something.
Rating: **½

Then, Hulk Hogan comes rushing out to Hart’s aid, and Fuji challenges Hogan to a match on the spot. With Hart’s blessing, Hogan takes the match.

~MATCH #9~
Hulk Hogan defeats WWF World Heavyweight Champion Yokozuna (w/ Mr. Fuji) at 0:21 to win the title. Yokozuna has been the Champion since 4.4.93, and this is his first defense. Fuji throws the salt again but Hogan ducks and this time it hits Yoko. Hogan hits a clothesline and the Legdrop to get the pin and win his fifth WWE Championship. Obviously, this was barely a match.
Rating: DUD

A2Z Analysiz
This one starts off promising with the first two matches, and then it falls apart in a pretty major way after that. While the finish of the is commonly reviled, at least its memorable, Also I do like the Caesar’s Palace set. Those are pretty much the nice things to say about this show.