Vampires Of The Addiction & Vigil From Arrow Video In June

New from Arrow Video US.

As the nights get hotter, you want cool films in the evening to take the sweat off your brow. Arrow Video has two titles that should makes things feel good in the humidity. Vigil is a breakthrough debut of the director who would later give us The Navigator: A Medieval Odyssey (which Arrow should be releasing in July). The film is about a stranger on a New Zealand farm who takes advantage of a power structure change. The Addiction is when Abel Ferrara made a film about blood suckers instead of merely bloodletters. These are the vampires of Manhattan’s lesser neighborhoods. Both films come out at the end of the month.

On those summer days when it’s just too hot to hit the beach, Arrow Video has you covered with two new June releases that will make staying in and keeping cool the best way to spend those long summer days.

The first summer delight comes courtesy of Arrow Video for the release of Vincent Ward’s directorial debut, Vigil. An 11-year-old grow attempting to get over the death of her father is determined to protect her family from a mysterious stranger that she believes to be the Devil. This New Zealand classic was the first from the country to screen in competition at the Cannes Film Festival and the film’s young star, Fiona Kay, was rewarded with a standing ovation.

And secondly, moving stateside we get an interesting entry from the vampire subgenre with cult favorite Abel Ferrara and his 1995 take on the bloodsuckers with The Addiction. Philosophy grad student Kathleen (Lili Taylor) is bitten by a vampire and must learn to come to terms with her new lifestyle with now features a frequent craving for human blood. Shot in stunning black and white and on the streets of New York, The Addiction is a raw and shocking vampire film that only Abel Ferrara could make. 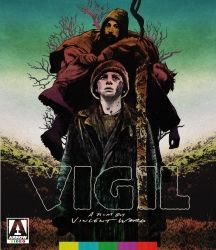 Vincent Ward – once described as “the Antipodean Werner Herzog” – made his feature debut with Vigil, heralding his status as one of New Zealand’s most distinctive filmmaking talents and paving the way for such equally remarkable and unclassifiable efforts as The Navigator: A Medieval Odyssey and Map of the Human Heart. A stranger appears in a remote New Zealand farmland at the exact time a farmer accidentally falls to his death. The mysterious outsider grows close to some of the dead man’s family, to the point where he and the widow become lovers. But her eleven-year-old daughter, Toss, struggling to come to terms with the death of her father as well as her impending womanhood, believes the intruder to be the devil and sets about protecting her family and their homestead. Propelled by Fiona Kay’s outstanding performance by as Toss, she would earn a standing ovation when Vigil screened at the 1984 Cannes Film Festival – the first time ever that a New Zealand feature played in the main competition.
Bonus Materials
High Definition (Blu-ray) presentation
Original mono audio (uncompressed LPCM)
Optional English subtitles for the deaf and hard-of-hearing
Brand-new appreciation by film critic Nick Roddick, recorded exclusively for this release
On-set report from the long-running New Zealand television programme Country Calendar
Extract from a 1987 Kaleidoscope television documentary on New Zealand cinema, focusing on Vigil and Vincent Ward
Theatrical trailer
FIRST PRESSING ONLY: Illustrated collector’s booklet featuring new writing on the film by critic Carmen Gray

The mid-nineties were a fertile period for the vampire movie. Big-name stars such as Tom Cruise and Eddie Murphy flocked to genre, as did high-caliber filmmakers like Francis Ford Coppola, veterans Wes Craven and John Landis, independents Michael Almereyda and Jeffrey Arsenault, and up-and-comers Quentin Tarantino and Guillermo del Toro. Amid the fangs and crucifixes, Abel Ferrara reunited with his King of New York star Christopher Walken for The Addiction, a distinctly personal take on creatures of the night. Philosophy student Kathleen (Lili Taylor, The Conjuring) is dragged into an alleyway on her way home from class by Casanova (Annabella Sciorra, The Hand That Rocks the Cradle) and bitten on the neck. She quickly falls ill but realises this isn’t any ordinary disease when she develops an aversion to daylight and a thirst for human blood… Having made a big-budget foray into science fiction two years earlier with Body Snatchers, Ferrara’s approach to the vampire movie is in a lower key. Shot on the streets of New York, like so many of his major works – including The Driller Killer, Ms. 45 and Bad Lieutenant¬ ¬- and beautifully filmed in black and white, The Addiction sees the filmmaker on his own terms and at his very best: raw, shocking, intense, intelligent, masterful.

Second Eurocrypt of Christopher Lee opens in May

The Possessed creeps into your home in October