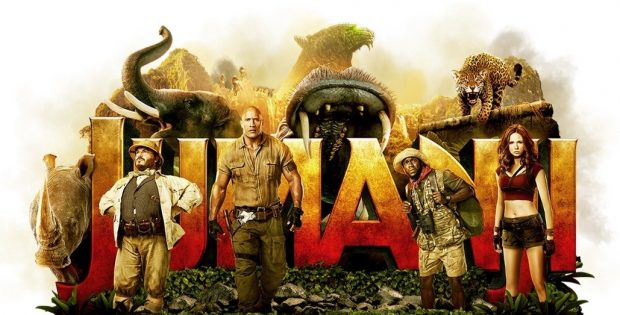 I have to admit, while a huge fan of Robin Williams, the original Jumanji was never one of my favorites. Thus, when I heard they were making a sequel I mostly wondered why. The addition of a Guns N Roses song as the subtitle to the film did nothing to increase my excitement. But hey, in the movie reviewing game – when you get sent a movie, you review it.

Jumaji: Welcome To The Jungle opens in 1996. A dad finds the titular board game, that Alan Parrish (Williams) had tossed aside at the end of the first film, half buried on the beach. Excited he runs home and shows it to his son, Alex. Alex being a teenager in the 90’s is uninterested in this board game and goes back to playing his video games. Jumanji realizes it needs to get with the times if it wants to still be used and while Alex sleeps Jumanji turns into a video game. The next day Alex discovers the mysterious new video game and pops it to check it out. The second he selects a character he is instantly sucked into the game.

Cut to 2016 where we are introduced to Spencer (Alex Wolff) a shy nerdy kid, Anthony (Ser’Darius Blain), a football player who used to be friends with Spencer and now just uses him to do his homework, Bethany (Madison Iseman) a typical popular girl who is totally into herself, and Martha (Morgan Turner) a shy girl who things PE is a waste of time. Each of these kids gets detention, where they have to clean out this old classroom filled with crap. One of the kids finds an old video game system. Spencer sets it up and they turn on Jumanji. Just like Alex before them, they are quickly sucked into the game after choosing their characters.

So in the first Jumanji the board game brought things into the real world, Alan Parrish being the only one to get sucked into the game. This time around everyone gets sucked into the game and that is where all the action happens. It’s pretty impressive how quickly the film establishes not only the new rules of this Jumanji, but our four main characters as well. It wastes no time getting them into the game, but it doesn’t feel rushed either. We know who these four kids are before they are replaced by their avatars.

Once the kids land in the game of Jumanji they quickly realize they now look like the characters they chose to play as. Squirrelly little Spencer is now Smolder Bravestone (Dwayne Johnson), The big beefy Anthony is now Franklin “Mouse” Finbar (Kevin Hart), The vain Bethany is now Dr. Sheldon “Shelly” Oberon (Jack Black), and the shy Martha is now Rudy Roundhouse (Karen Gillan). There are two things that are clear right away during this transition. One) these actors clearly did their homework and sell the fact that they are still four teenagers. Two) They had a hell of a lot of fun doing so. This is the big thing that sells this whole silly movie: how well Johnson, Hart, Black and Gillan represent the teenagers they are playing. Johnson is constantly unsure of himself and shocked at the size of his muscles, Hart is pissed off at how short he is and that one of his characters weaknesses is cake, Black of coarse just freaks out because what teenager girl would want to look like that?, and Gillan does a great job of being a shy girl coming out of her shell.

The kids quickly figure out the rules of the game. The evil Russel Van Pelt (Bobby Cannavale) stole a sacred jewel from a mountain top and they have to retrieve the jewel and return it to where it belongs to safe Jumanji and get themselves home. Along the way they meet Jefferson “Seaplane” McDonough (Nick Jonas) who turns out to be Alex from the opening scene. He thinks he’s been trapped in the game for a couple of months. He doesn’t realize that 20 years has passed since he disappeared. Alex is worried about joining them though, because he only has one life left, and if you lose all your lives in the video game, you die for real.

I need not really say more about the plot, it would get a little spoilery at this point. Suffice to say, this is actually a pretty fun movie for what it is. I think I’d even go so far as to say I think I enjoyed this one more than the first one. Granted, it’s easily been 20 years since I last watched Jumanji so who knows, maybe it’s aged better than my memory of it has. But my initial takeaway was that Welcome to the Jungle was fun in ways that the first film never quite grasped. Maybe that’s because I grew up in the video game era and can relate to this idea of this film more. I mean what kid hasn’t dreamed of getting sucked into a video game?

In the end, Welcome To The Jungle proved to be far more entertaining than I initially thought it would be, which wa a pleasant surprise. If you’re looking for a fun way to spend some time, you might want to check this one out.

The film is presented in a 2.39:1 widescreen format and 5.1 Dolby Digital surround sound. This is a great looking and sounding film. Good times.

I am not a Kevin Hart fan, I generally don’t enjoy him when I see him in films. That said, he was pretty funny in this. So I think it’s safe for me to say this is the best Kevin Hart movie I’ve seen. So there’s that.