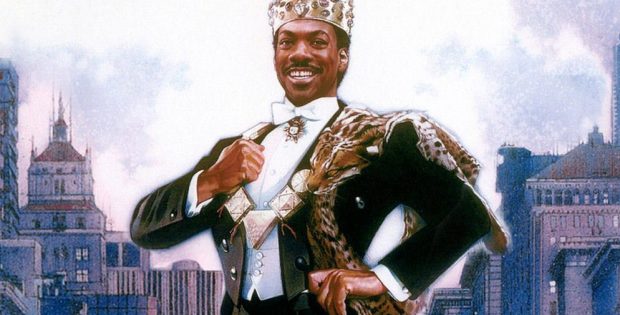 To celebrate the 30th Anniversary of Coming To America the film is being released again. This is the first Eddie Murphy movie I ever saw and to this day it is still my favorite. He really was never able to top this film. So what else is there to say about it after all this time?

Murphy stars as Prince Akeem Joffer of Zamunda. All of Akeem’s life everything has been done for him, including wiping his own butt. He has just turned 21 and his parents King Jaffe (James Earl Jones) and Queen Aeoleon (Madge Sinclair) tell Akeem it is time to meet his wife. However, Akeem isn’t happy with an arranged marriage. He wants to meet a woman who will like him for who he is and have thoughts of her own, not just bow to his wishes. He convinces his father to let him and his friend Semmi (Arsenio Hall) go to america for three months. King Jaffe thinks it is to “sow his royal oats” but in truth Akeem wants to find a suitable bride.

Akeem and Semmi choose Queens, New York. It seems to them the best place to find a woman who would one day be a queen. Akeem doesn’t want a woman to love him because he is rich and a prince, so he and Semmi go undercover as students. They get a crappy apartment and end up getting a job at McDowell’s (not to be confused with McDonald’s) because Akeem meets and instantly falls for the daughter of the owner Lisa (Shari Headley). Now all Akeem has to do is win over her dad, Cleo (John Amos), and convince her current boyfriend Darryl (Eriq La Salle) is a jerk, which should be pretty easy because it is.

Coming To America is a classic 80s comedy that is still as funny today as it was then. On top of those great actors already listed the film also features Louie Anderson as a fellow McDowel’s employee, Samuel L. Jackson as a guy who tries to rob the restaurant, and a very young Cuba Gooding Jr., as a kid getting his haircut at the barber shop.

Oh, the barber shop. Murphy would later put a nail in the coffin of the idea of him playing multiple characters, but it was first introduced her to hilarious results. Murphy not only plays Akeem, but also Clarence, the barber shop owner, Saul, an old Jewish guy who hangs out at the barber shop and Randy, the terrible singer of a band called Sexual Chocolate. Hall also plays multiple characters. On top of Semmi he plays Morris, another barber, Reverend Brown, and an unattractive woman who hits on them in a club. So in the barbershop scene when Akeem and Semmi walk in you have Murphy playing three characters and Hall playing two. Each character is so distinct you’d hardly notice it was them in all the rolls.

Like I said above, I really don’t know what else to say about this film. It’s a damn funny movie and if you haven’t seen it yet you really should do so sooner rather than later.

The film is presented in a widescreen format and 5.1 Dolby Audio. The film has never looked or sounded better.

Extras include: Prince-ipal Photography: The Coming Together Of America: (25 min.) Fit For Akeem: The Costumes of Coming To America: (18 min.) Character Building: The Many Faces of Rick Baker: (13 min.) Composing America: The Musical Talents of Nile Rodgers: (11 min.) A Vintage Sit-Down with Eddie and Arsenio: (6 min.)

It’s interesting that Aresnio Hall never really acted again after this movie. He played himself a few time and did cameos and stuff, but never to the level at which he appeared in Coming To America, which is a shame because he’s really funny in it. Everyone is funny in this film. It’s a very funny film. Seriously, if you haven’t seen it do it already!