There are probably a few viewers of Netflix’s GLOW that haven’t an idea that it really was a show in the ’80s that featured women wrestling with fun and fashion. In my area, it came on TV at the perfect time on Saturday afternoon. It hit that sweet spot where the hangover of Friday was finally drifting away and before we need to game up for Saturday night. You could lay back on the sofa and take in the majesty over the top female characters ready to beat each other up. For those late to the game, Shout! Factory TV and Twitch are dipping into the vaults to bring the original GLOW battles to the screen starting with a marathon. Here’s the press release from Shout! Factory: 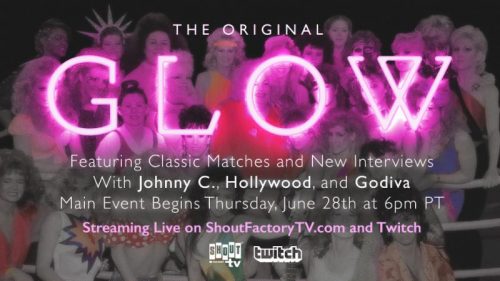 LOS ANGELES & SAN FRANCISCO – June 20, 2018 – Shout! Factory TV will partner with social video platform Twitch to host a livestream of the original Gorgeous Ladies of Wrestling (GLOW) on June 28. Ahead of the fictionalized GLOW series’ second season premiere, fans can see where the phenomenon began with segments from the original wrestling battles in Brawlin’ Beauties GLOW and brand-new interviews with GLOW host Johnny C. and wrestlers Hollywood and Godiva. The livestream begins Thursday, June 28 at 6 p.m. PT on Shout! Factory’s official Twitch channel.

Broadcasting from the Santino Bros. Wrestling Academy in Los Angeles, original GLOW stars Johnny C., Hollywood (Seasons 1-4) and Godiva (Seasons 3-4) will take fans behind the scenes of the milestone series that inspired a generation of female wrestlers. They’ll tackle everything from how the new series compares to the original show, how GLOW brought female empowerment to a male-dominated sport and how women in wrestling’s representation has evolved over the years.

The original GLOW premiered in 1986 as the first-ever all-female wrestling promotion. The show ran through 1990 but continued in various forms after it left television, paving the way for women in professional wrestling.

Brawlin’ Beauties: GLOW highlights a bevy of the beautiful and feisty femme fatales who wrestled for GLOW. Classic wrestling fans can relive the all-women comedic presentation of the sport dominated for many years by men. Hosted by “Mean Gene” Okerlund, this documentary grants a look back at the women who made history and helped to blaze a trail for today’s wrestling entertainers.