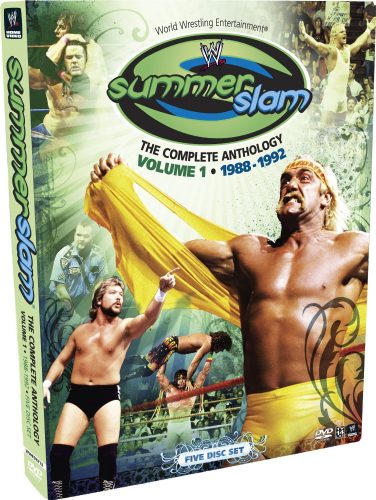 Check out my friend Brad Garoon’s The History of Dragon Gate e-book series!

Vince McMahon and Bobby Heenan are on commentary.

Ted DiBiase and Irwin R. Schyster have their manager Jimmy Hart with them, and Hawk and Animal have both Paul Ellering and Rocco in their corner. Hawk and DiBiase start it off, and it doesn’t take much for DiBiase to bail to the floor. Animal makes him pay for it and throws him right back in the ring. Hawk clotheslines DiBiase right back out and Animal adds another clothesline before throwing DiBiase back in. IRS tags in and Animal follows suit. Obviously Animal dominates here and the crowd loves them some LOD. Hawk tags back in and IRS is able to subdue him with a sleeper. After a brief time in the hold Hawk backs IRS into the corner to break it, and then whips IRS into the other corner and follows him in with a clothesline. Hawk goes up top but this time misses a clothesline and he tumbles to the floor. DiBiase issues a bodyslam and dumps Hawk back in the ring for more punishment. Money Inc. keeps Hawk away from Animal for several minutes and they wear him down. At one point Hawk is able to make the tag but the referee doesn’t see it so he won’t allow it. Even though he allowed Money Inc. to do the same thing. Referees are dumb. Anway, Hawk makes the hot tag in view of the referee next time, so Animal is allowed to come in and clean house. The LOD get rid of IRS and go for the Doomsday Device on DiBiase. IRS makes it back in to break that up and Hawk knocks him to the apron. Animal shoves DiBiase into IRS and then catches him with a nice powerslam to get the pin at 12:00. That felt a little longer than it was, but for the most part it was a servicable tag team formula opener. I think Legion of Doom were gone soon after this.
Rating: **½

Nailz dominates in the early going, and when Virgil tries to put together some offense Nailz just cuts him off and chokes him. Virigl keeps trying to fight but Nailz chokes him down and throws him to the floor. Nailz slams Virgil’s face off the ring apron repeatedly. Back in the ring Virgil again tries to fire up but to no avail. Nailz then locks Virgil in a Choke Sleeper and Virgil’s lights go out at 3:17. That was a sloppy squash.
Rating: ½*

This is a rare heel versus heel match up, with the added stipulation (put in place by Sensational Sherri) that they may not hit each other in the face. They start with some fast-paced back and forth, with both men eager to show up the other. Both men also throw in little cheats every opportunity they have. Martel scores the first big blow when he hurls Michaels to the floor. He goes outside and lures Sherri in for a nice hug. Martel then turns his attention back to Michaels and brings him back to the ring. Momentum continues to shift and Michaels takes control as both men continue to cheat as often as possible. Things get heated and they start hitting each other in the face! That’s what Sherri did not want. Both men cock their fists and Sherri “faints” on the apron. Michaels and Martel both go to the floor and fight each other over who is going to tend to the fallen Sherri. They start throwing fists and fight each other down the aisle for a double-countout at 8:08. That was quite different from most matches of the time, with the heel versus heel and no punching dynamic going on. It was a little short to really get good, but it’s still quite fun and memorable.
Rating: ***

Earthquake and Typhoon have been the Champions since 7.20.92, and this is their first major defense. They dominate in the early going, using their weight to squash the Beverlys and throw them around. Blake is able to avoid getting squashed between the two behemoths in the corner, and the brothers take control. Beau and Blake isolate Typhoon and try to keep him grounded, thus neutralizing his size and strength advantage. This goes on for several minutes. Beau goes after Earthquake to distract the referee, allowing Blake to hit Typhoon with the Genius’s metal scroll. As a kid I was CONVINCED that was the end. Earthquake breaks up the cover with a hard elbow drop though. Then the hot tag is made and Earthquake is a natural disaster afire. Earthquake hits a nice belly-to-belly suplex. Man, he could move. Blake comes in and tries to help his brother but they both get bowled over. Typhoon tosses Blake to the floor and Beau gets squashed in the corner. Earthquake hits a big powerslam and then the Earthquake Splash to get the pin at 10:24 along with a monster pop. That was fine fomula stuff and about all one could reasonably expect given the participants.
Rating: **

Repo attacks at the bell but Crush just shrugs him off and does military presses with him. Crush dominates with his size and power advantage. He goes to the top rope and misses a knee drop. Repo Man tries to take advantage but Crush is all like, “nah, that’s cool.” When Repo goes to the top rope for a cross body block, Crush catches him in a powerslam. Crush then locks on the Cranium Crush and it’s over at 4:03. That seemed more fitting for an episode of Superstars than a major pay-per-view.
Rating: *

Savage has been the Champion since 4.5.92, and this is his third major defense. Things get heated right away between these two former rivals. Both are now good guys but there is still tension stemming from their feud in 1991 in which Warrior temporarily ended Savage’s career. Savage takes the first advantage and goes to the top rope for an ax handle but Warrior buries a fist into his midsection. Warrior presses the advantage and puts together a string of moves but misses an elbow drop. The challenger perseveres and is quickly back on offense. Savage fights back and clotheslines Warrior to the floor. He brings him right back in and covers for two. Savage hits an ax handle from the top rope but Warrior doesn’t feel it. A second one takes Warrior off his feet for a near-fall. Savage goes for a cross body block but Warrior catches him and hits a backbreaker for two. Warrior keeps the pressure on, working on Savage’s back. Savage comes back with a neckbreaker for a two-count. He can’t stay on offense though due to his injured back. Warrior goes for a clothesline but Savage ducks and Warrior crashes hard to the floor. Savage follows with the flying ax handle. He abuses Warrior on the floor for a bit and brings him back in the ring for a cover. Then Mr. Perfect and Ric Flair make their way to ringside. During the buildup to this match they promised that one of the two combatants in this match had secured Perfect’s managerial services. Flair is in full wrestling gear for some reason. Meanwhile, Warrior has regained control. Warrior goes for a big splash but Savage gets his knees up. Savage covers for two. He and Warrior then clothesline each other and both men are down. They take turns covering each other but get two. Perfect makes his first impact on the match by tripping Savage, and it looks like Warrior has sold out. The referee gets bumped and Warrior continues to beat on Savage. Warrior hits an ax handle from the top rope but the referee is slow to count so it only gets two. The challenger argues with the referee and the Champion delivers the High Knee, causing the referee to get dumped to the floor. Savage hits a piledriver but there is no ref to count of course. He tries to revive the ref and Perfect gets in the ring to seemingly help Warrior, but he holds Warrior instead and Flair blasts him with brass knuckles! Perhaps Savage is the one who sold out!? Savage slams Warrior down and hits the Diving elbow drop. Warrior kicks out at two! Warrior starts to Hulk Up and he delivers a series of clotheslines. He hits a diving shoulder block and then the Press Slam. Warrior then goes for the Big Splash but Flair cracks him across the back with a steel chair! Savage gets up and sees that Warrior is down, and he knows he didn’t do it. The Champion is angry with Perfect, but he goes to the top rope anyway. Savage seems to have second thoughts, so he turns toward Flair and leaps at him, only to get swatted out of the air with a chair! The Champion injures his knee and is unable to crawl back to the ring and gets counted out at 26:15. This match gets overshadowed by Bret Hart vs. British Bulldog in the main event, but this is a hell of a match. The pace they cut was intense, and the underlying mystery of who would have Flair and Perfect on his side was intriguing. Savage and Warrior had ridiculous chemistry, and while this wasn’t on the level of WrestleMania VII, this is a bit of a lost gem that doesn’t get enough credit.
Rating: ****

Undertaker hammers away right from the beginning and chokes the Ugandan giant. He dominates, avoiding a charge in the corner and hitting Old School (not yet called as such). Undertaker tries Old School again and this time Harvey Whippleman helps Kamala slam Undertaker down to the mat. They take the battle to the floor, where Kamala controls with strikes and kicks. Kamala slams Undertaker’s head off the steps. Back in the ring Kamala keeps up the pressure but Undertaker ducks a clothesline and hits the Chokeslam. Undertaker hits a flying clothesline and he goes for the Tombstone but Kimchee runs in for the DQ at 3:40. It was probably wise to keep that one short.
Rating: *¼

Hart has been the champion since 4.5.92, and this is his third major defense. They try to psyche each other out in the early going. Bulldog shows his power advantage early, and Hart comes back with some scientific wrestling. The challenger comes back by going after Hart’s arm. The champion weathers the storm and starts systematically wearing the challenger down. Bulldog gets a few hope spots in there but Hart is able to thwart his comeback attempts. He even abuses Bulldog outside the ring. Bret continues to dominate, and really wears Bulldog down with a sleeper. Bulldog fights his way out of it and press slams Hart into the ropes, which I’m surprised to say I don’t think I’ve seen anyone do since then. Although if you believe Bret Hart, Bulldog probably just dropped him accidentally because he was sucking so much wind the entire match. Bulldog gets some offense in now and Hart withstands his attacks. He even kicks out of the Running Powerslam, and winds up with a German Suplex for two. Bulldog comes back with a huge superplex but it only gets two. Hart comes back and locks on the Sharpshooter and Bulldog reaches the ropes. Moments later Hart tries a sunset flip and Bulldog kneels down and hooks the legs to get the pin at 25:11. Bret claims he held Bulldog’s hand through that match (which is a feasible story), but however they did it this match still holds up as awesome.
Rating: *****